Hey squirrel, are the St. Louis Cardinals gonna luck out? 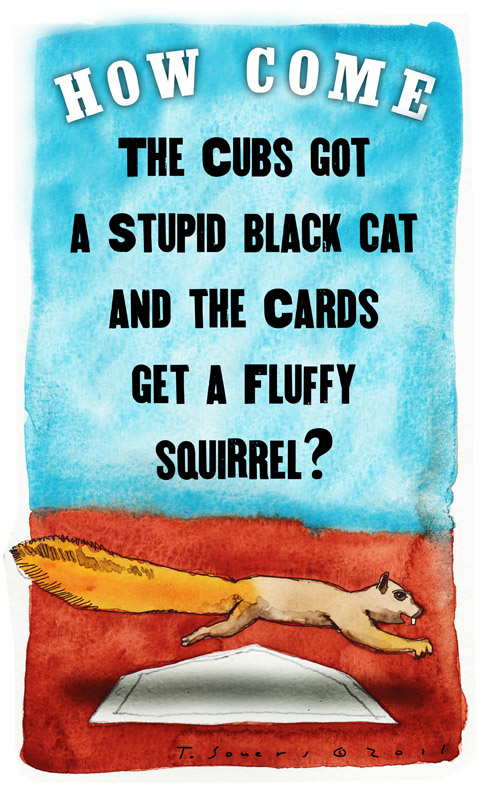 Watching a cute, fluffy squirrel dash across home plate last night in the Cards/Phillies game, I couldn't help but think of Ron Santo and the Black Cat in 1969.
A simple switch in color and species, and nobody's talking about superstition and bad luck and doom back when the Cubs gagged up their division lead to the Amazin' Mets.

Yeah well whatever, the longshot 90 game winning Cardinals have tied up their short series with the 102 game winner Philadelpia Phillies with their 5-3 victory.
David Freese (David Freese?) knocked in 4 Cardinal runs.
Same thing happened in Phoenix, with longshot Arizona beating, actually bombing the Brewers 10-6.
Randy Wolfe gave up a grand slam to Ryan "Tatman" Roberts in the bottom of the first, and the Diamondbacks hit 3 other homers while the Brewers only threw jabs and never got the big inning.

Excellent baseball watching all the way around.

Tonight it's the coin-toss game between the Yanks and the Tigers - somebody's season ends no matter what.

And Friday will be a doubleheader with the same stuff at stake, and we'll know who's playing for the NL Championship by night's end.

Next, reader Josh sent me a couple hand-made, two-sided, W/L flag fridge magnets his sister's got for sale at Etsy. 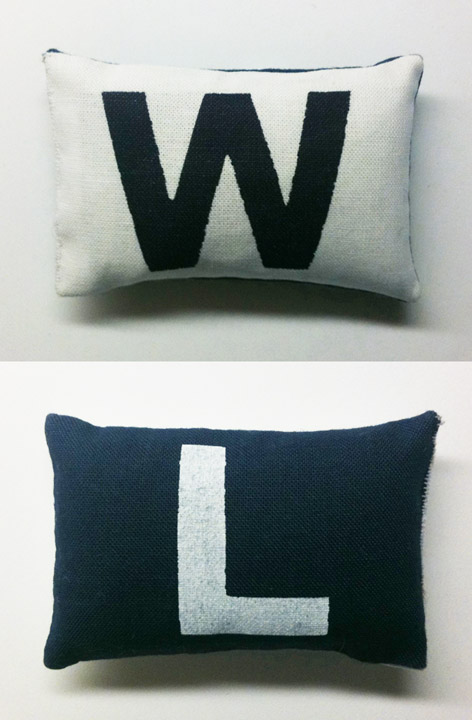 I had to share.
These things are awesome, the holidays are coming up and what a cool stocking stuffer for your favorite Cub Fan.
She's only got a couple left, but is in the process of making more...

Lastly Steve Jobs.
You can name a handful of United States Presidents and not find a guy who had more of an impact on how we live than Mr. Jobs.
We're not sharing our Cub tales of woe without him.
When I tell stories about being in advertising before everybody had computers, listeners are generally confused.
Icon, genius, innovator, game-changer, American.
We're so lucky to have been around to watch him work, and it's super sad he passed at such a young age.
If you feel like it, go to Apple and click on his image.
You can leave an email with your thoughts.