« Tomorrow the Cubs will have 2 less guys on the active roster. | Main | Patrick Wisdom with the clutch home run! »

The Cubs are doing what they're supposed to be doing vs the Pirates. 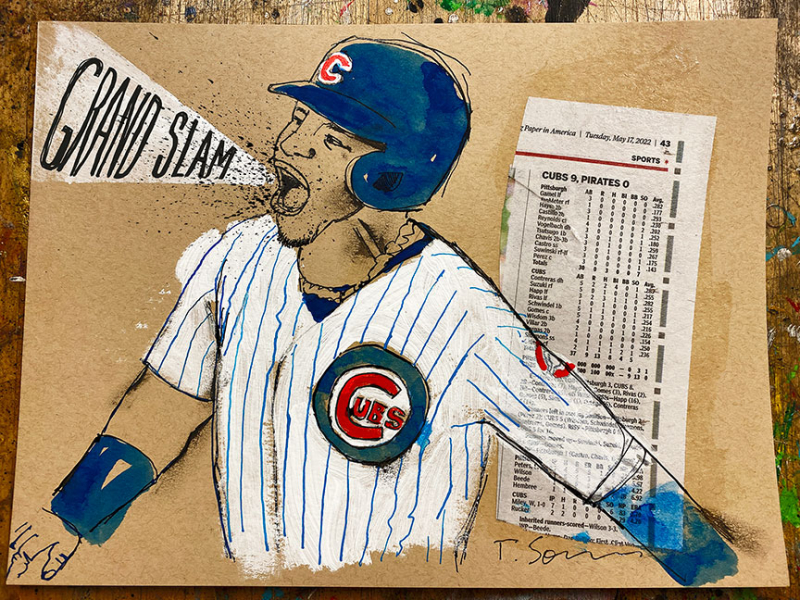 Game 1 vs the Pirates was a complete laugher - 9-0 shutout including Willson Contreras getting a salami as his 100th home run.
Wade Miley... he's been around and we've all seen him pitch for the Reds vs the Cubs, right?
Do you remember him as an uncommonly fast worker?
I don't.
I'd never seen him work as fast as he was working.
I was laughing at all the timeouts and step outs the Bucs were doing at the plate.
7 innings, 1 hit, no runs no walks... the first 4 innings were 1-2-3 and he didn't give up the single until 2 out in the 5th.
The game would have been FLYING except for the Cubs scoring 8 in the first.

I was at the game when the Cubs creamed the Pirates 21-0, but after that game the Cubs went into that funk.
They went 6-12 during that stretch til the Pirates came to town Monday.
So I was worried about what would happen after the 9-0 laugher, and instead... well it's just the Pirates but these 2 games have made summer better in lots of ways.
First is Keegan Thompson.
5 innings, 4 hits, no runs.
He could obviously start, but the rotation... it's been better but still it's messy (and Covid hasn't helped with Stroman disappearing , although he could be back any minute).
Thompson is Mike Montgomery with what looks like better stuff and way less of that "I deserve to be a starter" head that Montgomery had.
I love this kid.
And THEN in the 6th, Norris comes in for a couple pitches and leaves with an Achilles thing.
In comes Brandon Hughes for his debut in The Bigs, and he strikes out 5 in his 1.2 innings.
He's the first guy to do that in the modern era.
He's also a 16th round pick by the Cubs, as an outfielder.
Read this from the Des Moines Register, it's a great story.
But the point is... it's a pitcher the Cubs brought up, and it's crazy exciting because it's the kind of thing we see the Cardinals do all the time.
Couple years ago I'm at Busch with high school buddies watching the Cubs lose as Jose Quintana gives up 6 runs in the first inning.
Not a fun game, but Miles Mikolas gives up a couple and just when I think the Cubs might have some momentum, the Cards bring in a kid named Dakota Hudson for his Big League debut.
I remember saying something like, "Dakota Hudson? Sounds like a movie star, not a pitcher."
He strikes out 2 and his inning is over in a blink.
I HATE WHEN THE CARDINALS DO THAT STUFF, which is why Hughes performance gave me goosebumps.
And the other prospect making his B.L. debut, 22 year old Christopher Morel, he hits one out in his first at bat.

This game was just fantastic.

Tonight the Cubs have their first chance for a 2022 sweep.
Please Baseball Gods, let this post not be a jinx.

Last thing is just a quick story.
My wife and I go to one of those big, privately owned garden centers, supposed to be awesome.
And it is.
I mostly stand next to our gigantic metal push cart while she's picking out plants and dragging them over to me.
When we're checking out, the cashier sees that one of the plants has some other kind of plant growing in the pot and she says this: