Cubs fill up their stat tank, score 21 vs Pirates.

About 9:30 my wife goes, "It's gorgeous out. You should go to the game."
Huh?
Me?
I went online, found a killer seat for $90. I mean... I coulda gotten one way up top for $52, but it was my first game, so...
(Of course I forgot about the "fees", so add $32.)
Whatever, after this long miserable freaking winter I splurged.
And just driving to the park on a day the weather app says "80" will do magic things for your head.
I texted my parking friend Bernadette and had a spot waiting for me.
Walked to the Bernie's corner at Waveland and Clark and... will ya look at that.
It's Wrigley Field.

There is a day every year in Chicago, that first gorgeous day of Spring when EVERYBODY goes out and EVERYBODY is in the best mood they've been in for 6 months, and I walked right into it.

Showed my phone ticket and went immediately to the dog stand with grilled onions and cold beer.
And then... you know... walked up a tunnel, got visually hammered with all that green, and then nothin' mattered but baseball.

How lucky can I get?
I posted this picture on Facebook and captioned it: "I hate my miserable life". 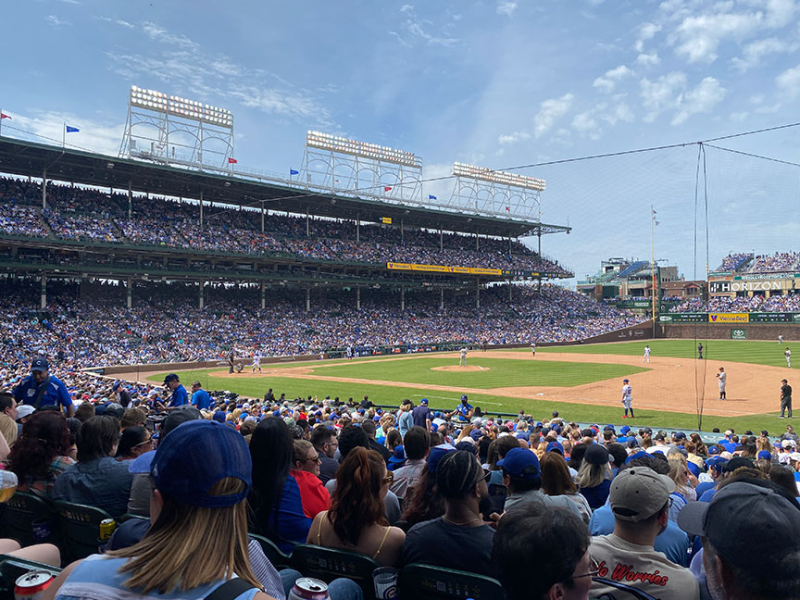 The wind was blowing out non stop at about 100 mph. 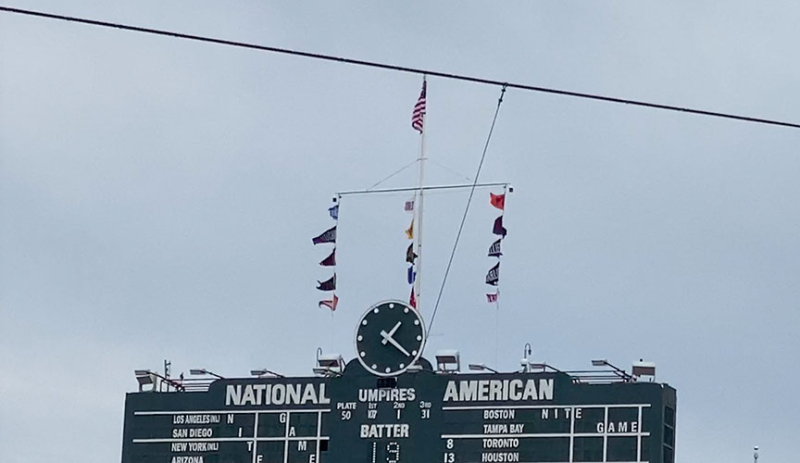 There is Kyle Freaking Hendricks RIGHT THERE. 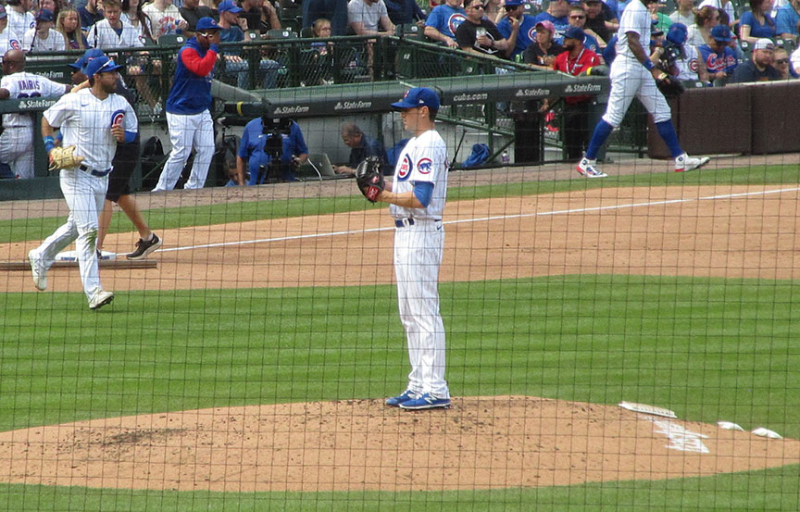 Old friend Dan Vogelbach leads off with a ground out. The next 2 guys Reynolds and Chavis smack the ball pretty good, but they both line out.
When the Cubs come up, I get my first live look at Seiya Suzuki. 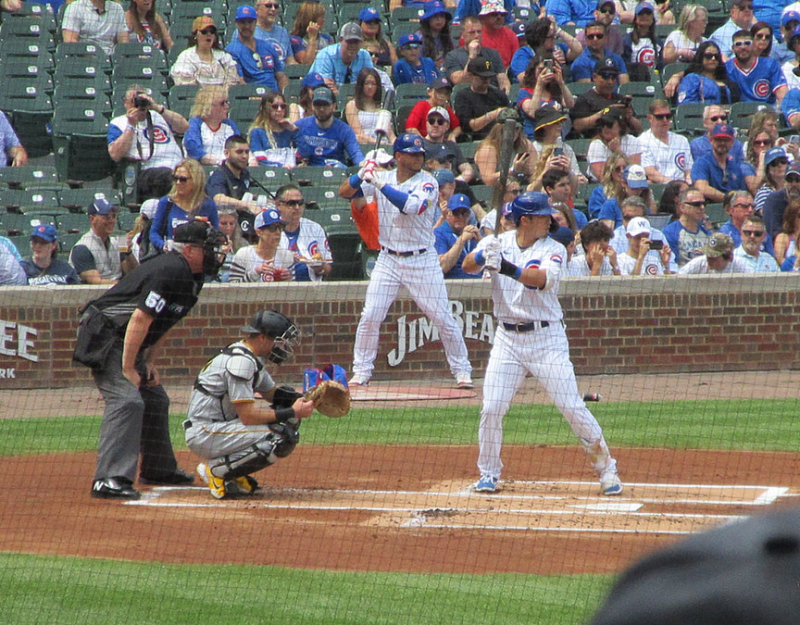 In what would become the theme of the day, he gets a hit.
Shortly after, Happ drives him in.
Patrick Wisdom comes up, and that silly American Airlines logo looks like Wisdom shattered his bat. 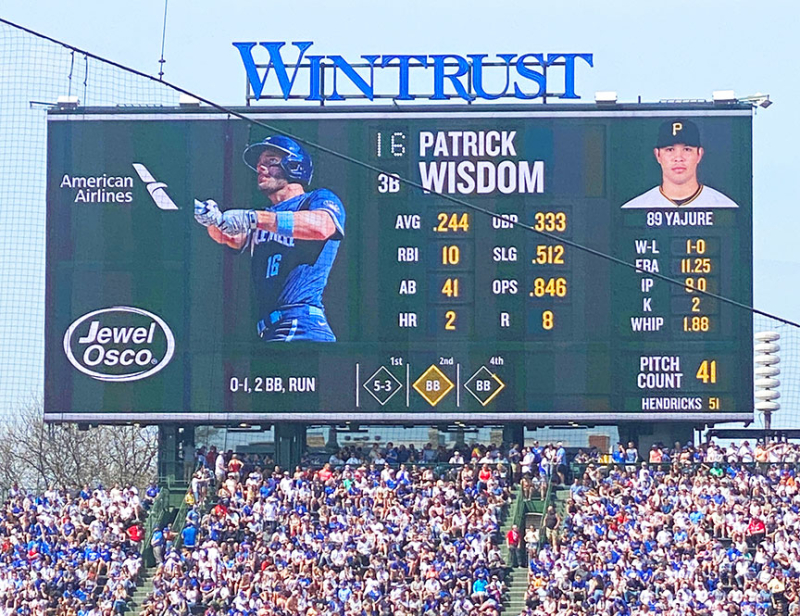 He grounds out and, after the bases load, JHey pops out, and it's Cubs 1 Pirates nothin'.

It was the 2nd inning where things went so crazy I started to feel bad for Pittsburgh starter Zach Thompson.
Because the Cubs are hitting balls all over the place, Thompson's infield commits two errors and the Cubs put 8 more on the board.
Including a very loud and impressive 416 foot outtahere shot by Alfonso Rivas. 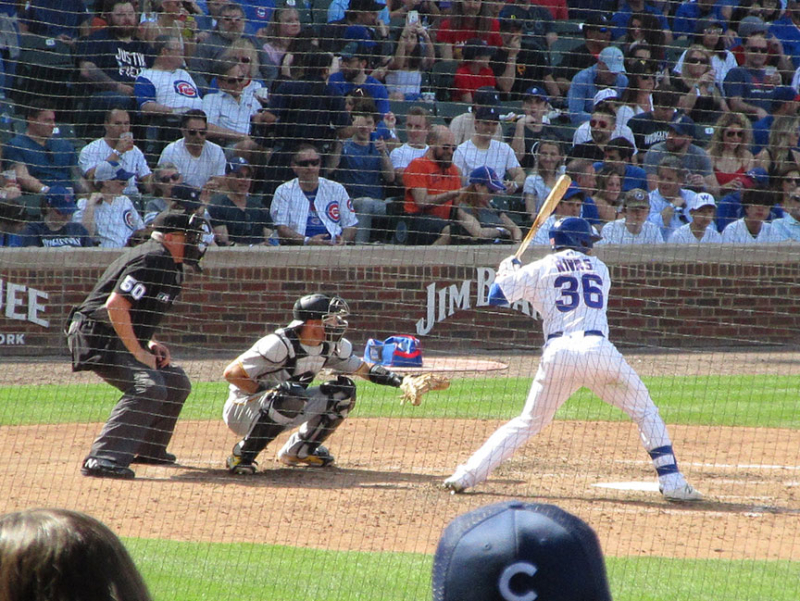 When Pat Hughes says "a laugher", this was the extreme definition.

I bought a couple filets on the way home.
They were delicious.

How much do you love Keegan Thompson, Cub Fans? 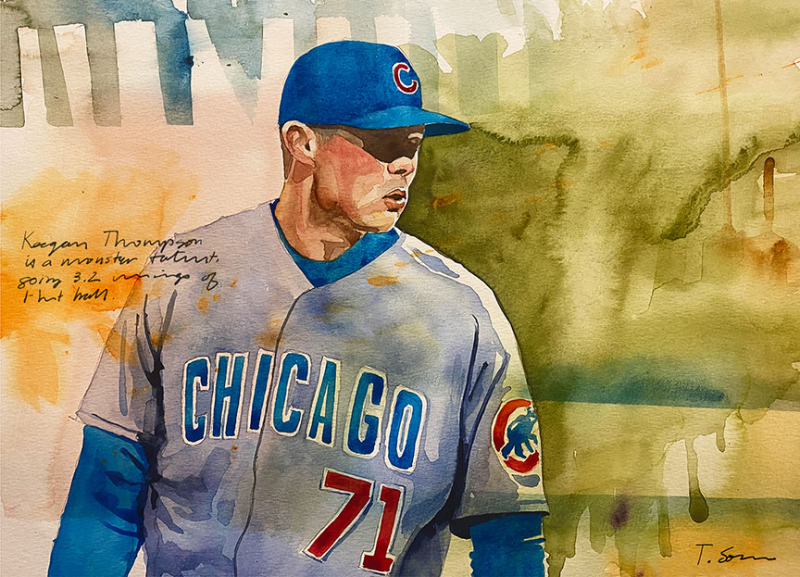 As usual last night, had some Cubs texting going on, and suddenly I sent this out: "Keegan Thompson is my current favorite Cub".

Twice this season he's come in, gone for 3+ innings, shut the other guys down and got the W.
Game-changing performances.
In total, 9.2 innings, 4 hits, 2 walks and 10 Ks.
He's 27, the age when baseball people say baseball players are at their peak.
Their prime.
And he really looks the part. So confident. Scary. In control.
His cheeks flush with adrenaline and... I've seen that look before.
It's right before someone lands a haymaker on someone else's chin.
Which is basically what he's doing from the mound.
That Brewers game... when Rossy "didn't" ask him to plunk anyone, and Thompson just decided to "try out" some different pitches during the game, and one got away from him... Of course no one wants anyone to get hurt, right?
That's what I always say out loud.
But in my old school head when that happened... let's say I wasn't politically correct in my thinking.

Anyway... having any fun yet?
The bats are crazy.
The Cubs are 2nd in ALL baseball in OPS (.803), 2nd in OBP, 3rd in SLG, 2nd in doubles... it's the opposite of the last Core.
Seiya Suzuki was voted Player of the Week, and he's really truly WAY beyond anybody's expectations.
Patrick Wisdom might be making the right adjustments...
It's just been really fun to watch and yeah, still not gonna write any sentences with "sustainable".
"Sustainable" is for fish.

Okay tonight we've come around again to Justin Steele.
Super fun, like watching a live grenade.
Did you see him last time out?
Cubs up 3-0 in the bottom of the 5th, and he gives up a single, a line out, and a walk. Rossy pulls him.
He wasn't angry about being pulled, I don't think, but he looked like a wild animal in the dugout.
Love this kid.

Okay 2 more against the Rays and 4 vs the Pirates in Chicago, and then it gets really rough with the freaking Braves, Brewers, White Sox and Dodgers.
The Cubs just might turn out to be that team with no real expectations, but who play like they don't care about any of that.
Yeah it's early but nobody wants to play a team like that.
Fun.
It's all I ask.

Lastly, did this for Jackie Robinson Day: 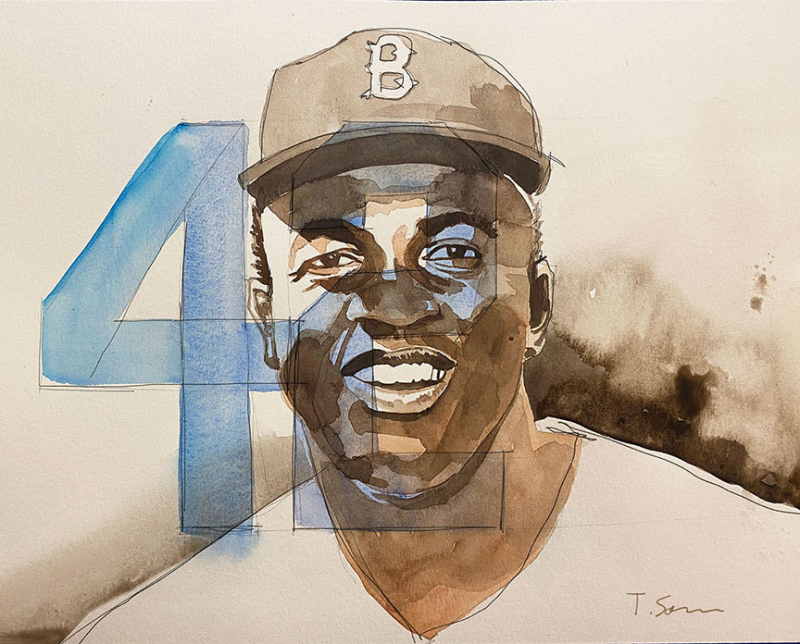 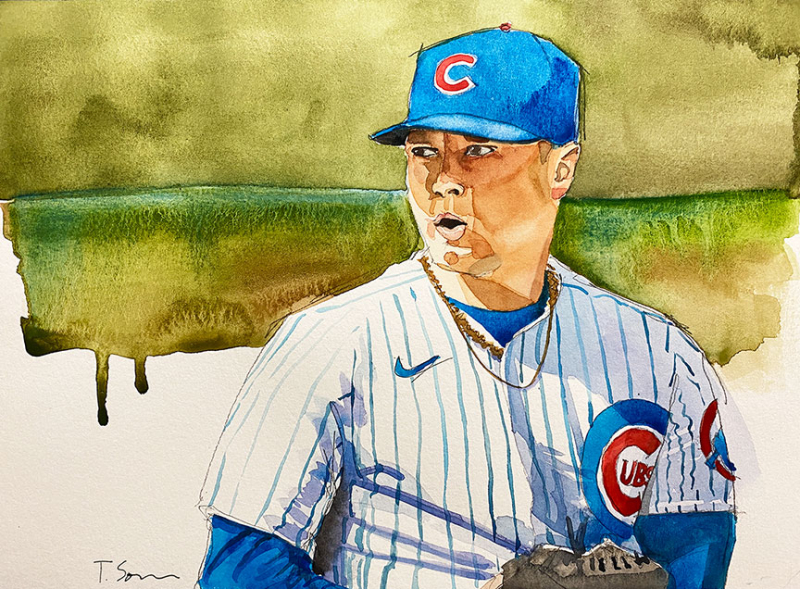 Well... 5 games into 2022, the Cubs are 3-2 and already have half as many wins vs Milwaukee as they did in all of 2021, when they were 4-15 vs Brewers.
Last Saturday in his first start of the year, 26 year old Justin Steele's dance partner was Brandon Woodruff, an All-Star last year with a 2.56 ERA.
Gulp.
I mean, before this game started how confident were you?
Didn't matter to Steele, who went 5 and gave up nothin' but a walk and 4 singles.
In the 4th, both Adames and Yelich led off with singles, but Steele escaped when he got Renfroe to ground out, then struck out Hiura and Taylor.
This season is just a little tiny baby, but if Steele keeps it up omg that would be huge.

Jed Hoyer told us this team would be "scrappy", and he was right.
You saw the benches clear against the Brewers.
Names change, but the plunking is constant.
If you saw the post game... Rick Sutcliffe hilariously just flat out said that Rossy instructed Keegan Thompson to hit Andrew McCutchen.
This was after Woodruff hit Contreras and Madrigal, and Gott hit Ian Happ in the knee with a gunshot sound that made me leave the room.
Then later of course Ross and Hottovy and Thompson all denied denied DENIED!
Whatever, hopefully no one gets seriously injured and.. I may have to do some "I hate the Brewers" pages.

And now it's game #6 for the 2nd place Cubs.
It would be nice if Frank the Tank and Mr. Wisdom would wake up, but overall this team looks like some serious fun.
Nico Hoerner's Derek Jeter impersonation against the Pirates was jaw dropping, and the bullpen seems to be the opposite of early last year's strugglers.
You've read over and over that it's either a "rebuild" and "not a rebuild", so how about we just call it a "build" and enjoy the summer?

If I time it right, I should be pulling some chicken off the grill about 7:30, get some plates ready and tune in for the 7:40 start.
Ahhh, that's heaven.

Go Cubs, and lastly for all you Wilco fans, here's a Jeff Tweedy painting. 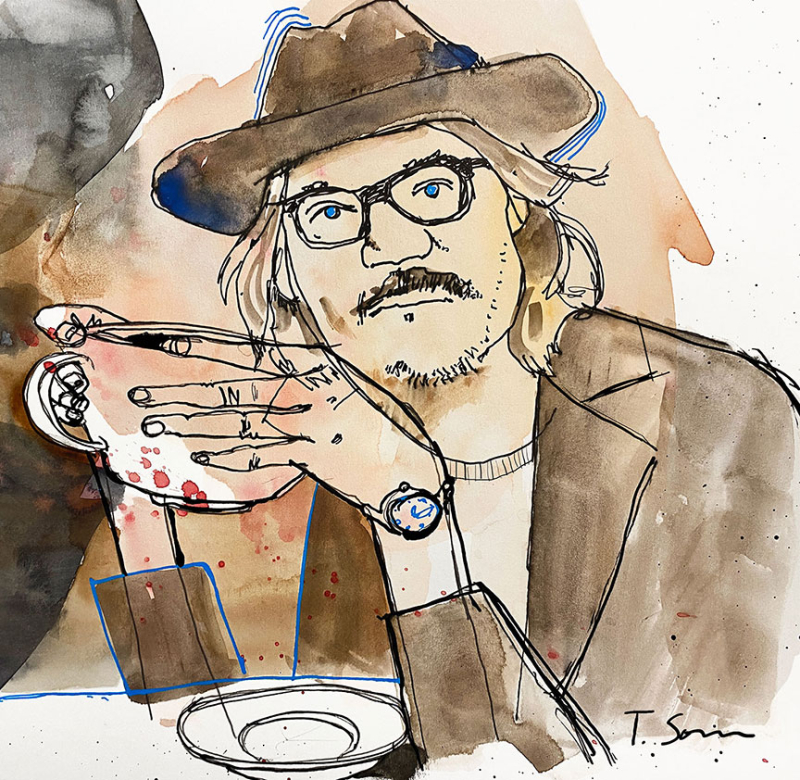 Went outside on this, the morning of Opening Day 2022, and I thought hey, what's that sound?
Of course.
A cardinal. 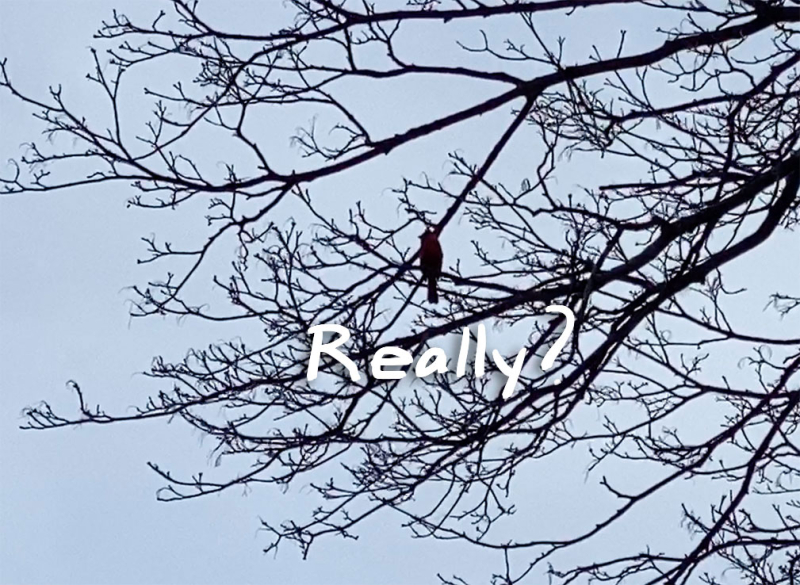 I've come full circle on these superstition things.
I mean I used to LIVE by them, then about 2015 I stopped because it was just smarter and easier to believe the players.
But now... that stupid Cardinal will be in my brain all day long, thinking it's a sign.
Whatever.
Hey do you know the Cubs starting lineup?
It's okay if you don't - so many new faces and they haven't posted it yet.
Here's what it was one day in August last year, the year the Cubs featured 3,021 different lineups: 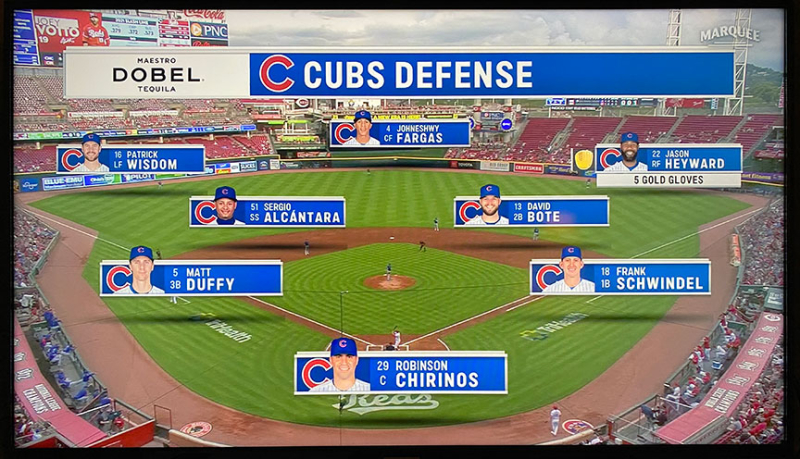 Wow.
Well... pretty sure the starting right fielder will be the new kid, Seiya Suzuki. 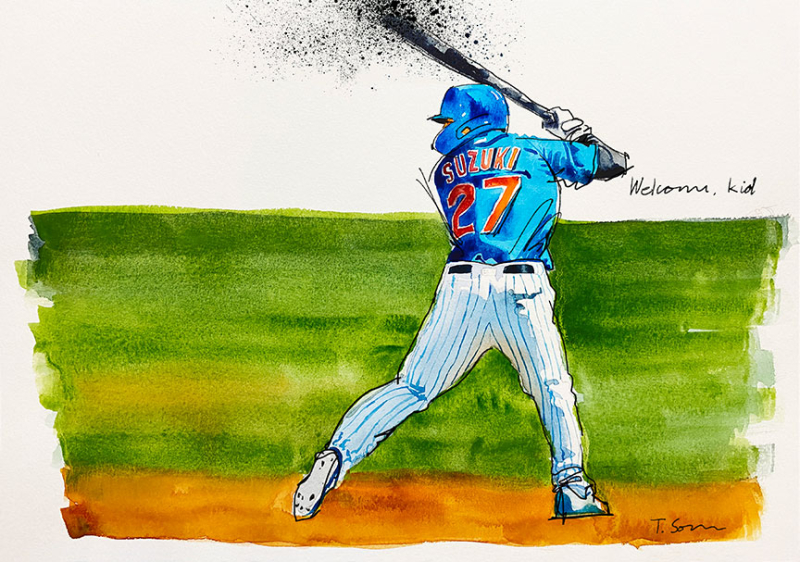 He went 4 for 17 this spring, with 2 going out.
Just like the team overall, it'll be smart to not expect too much too soon with him.
He'll have that learning thing coming from Japan's Bigs to the Bigs here.
And since I didn't see him do that crazy corkscrew tornado turn-all-the-way-around swing... no comp to Kosuke Fukudome at all.
So... my hope is he's a nice surprise, getting better as the season goes along.

Today we'll get to see if normally Old Faithful Kyle Hendricks has figured out last year's homer problem - it's always awesome watching him.
Then the starting staff features ex-Met Marcus Stroman, who I've got huge hopes for.
Then Wade Miley... oh wait. Ouch he's out with a sore elbow.
So after those top two guys the Cubs feature lotsa questions, and as I explained to my cat... that's not good.
On the other side, what's exciting?
Well there's Nico Hoerner at short. Did you see that play he made the other day?
Here's hoping he stays healthy and we get a good season long look at him playing every day.
There's the catching duo of Willson Contreras and Yan Gomes, meaning Willson won't have to wear the Tools of Ignorance every day.
Like last year's Core, Willson's on that no long term contract bubble and you gotta be realistic and expect he may be gone at the trading deadline.
But in the meantime, the lone All-Star on this team.
Enjoy!
Will Patrick Wisdom and Frank Schwindel continue where they left off, respectively smacking homers and OPSing with the best in baseball?
Will Ian Happ be his best Ian Happ?
And then after him... it's a lot of hmmms.
In 2012, the Cubs traded Andrew Cashner for Anthony Rizzo.
In all the freaking crazy trading Jed Hoyer did last year... could any of these new guys turn into a kind of Rizzo?
Time will tell, but for now probably the guy you'd hang your hat on would be Suzuki.

2022.. man. The smart people have the Cubs waaaay down there. I saw a power ranking thing that has the Cubs 23rd, the Cards 13th, and the Brewers number freaking 4.
Made me do this drawing here: 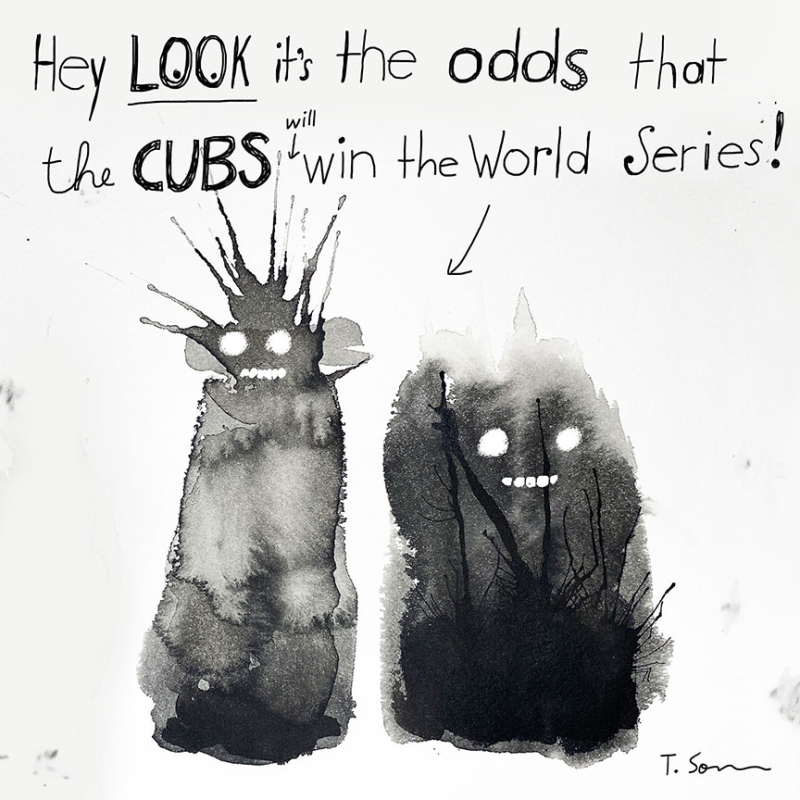 Well, that's not encouraging.
But eff that.
It's Opening Day.
Let the rain not come, the beer be cold, and lets see what these fresh faces can do.

I have a couple "last things".
First and most importantly, listen to this The Athletic's  "Starkville" podcast with Jason Stark and Doug Glanville interviewing Theo Epstein in his new role as the Guy Trying To Save Baseball. Theo explains all the game's changes in that clear, smart Theo style.
If that link doesn't work, try this. It's soooo good!

Albert Pujols went back to St. Louis and while we all hate the Cards, it'll be deadly-foe awesome if and when he bats in Wrigley. (This is a sketchbook painting from 2003, when he was a skinny kid hitting 40 homers.) 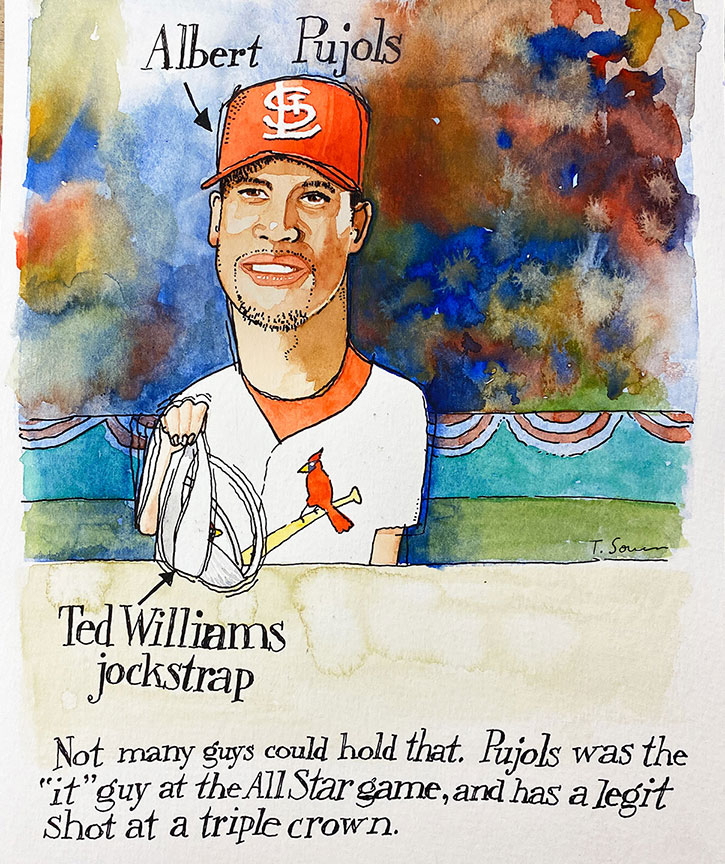 And lastly, how long can Liam Neeson be an "action" star? 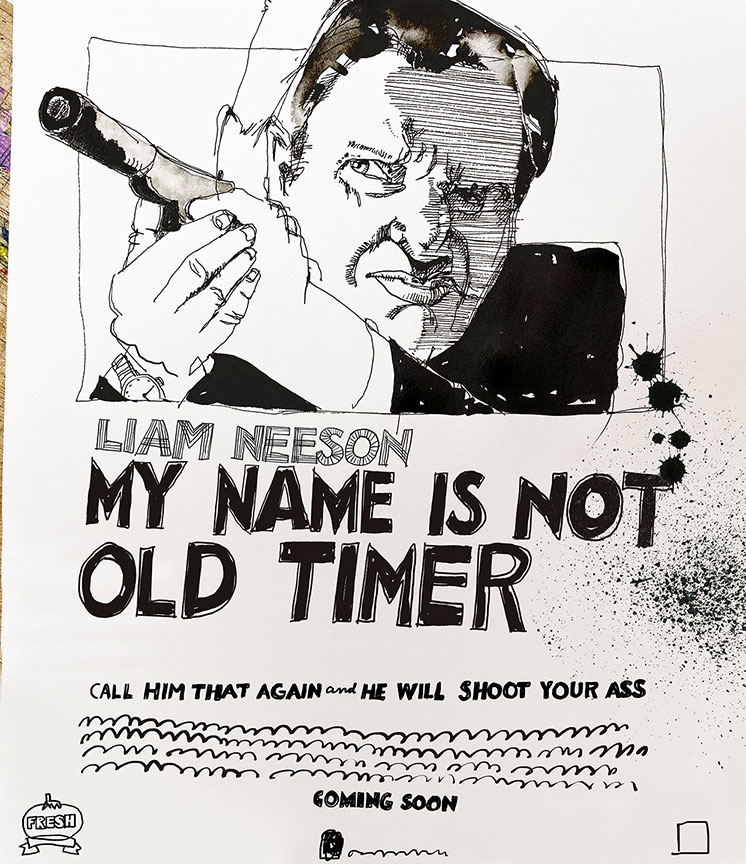 WHAT DID THAT STUPID CARDINAL MEAN ANYWAY?