It would be nice if the Cubs started making some moves. 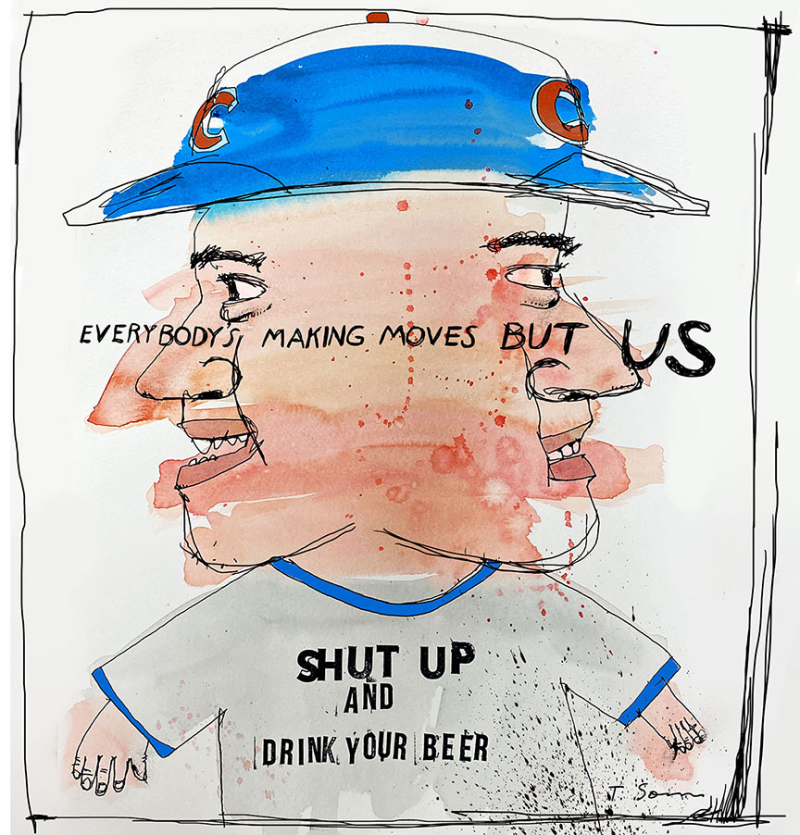 The Cubs snatched that guy who got booted out of Cincinnati.

Okay, I'm being a jerk, kinda.
The Wade Miley pickup was good, but I'll feel better when more happens.
And that'll probably happen after this top tier wave gets signed, because the Cubs aren't gonna surprise us with a big name.
That's not shocking, right?
I mean... we know how we got here.
And that was pretty painful, but now that we're all down here lookin' up, we should probably get used to the view.
At least til a handful of the kid prospects can start making the jump to the Bigs.
For now, it won't be as bad as 2012 or 2013 - we won't have anybody as bad as, say, Blake DeWitt.
But I expect to feel like I'm watching some James Russells or Luis Valbueanas, maybe a Nate Schierholtz.

I prefer to be down there with my thoughts and maybe something unexpectedly good will happen rather than the other way around.
A couple years from now, however, I'll reverse that.

Ummm.. what else?
I'm not surprised Matt Nagy's still here, but omg I totally took off my Bears hat at the airport during Thanksgiving travel.
When your head coach has to say, "Hey all these rumors about me getting fired are wrong"?
So embarrassing.
I continue to hope that he and Ryan Pace get the ax at the end of the season.
And if that happens, hopefully they have someone waiting in the wings.

Anyway, here's other stuff I've been working on... 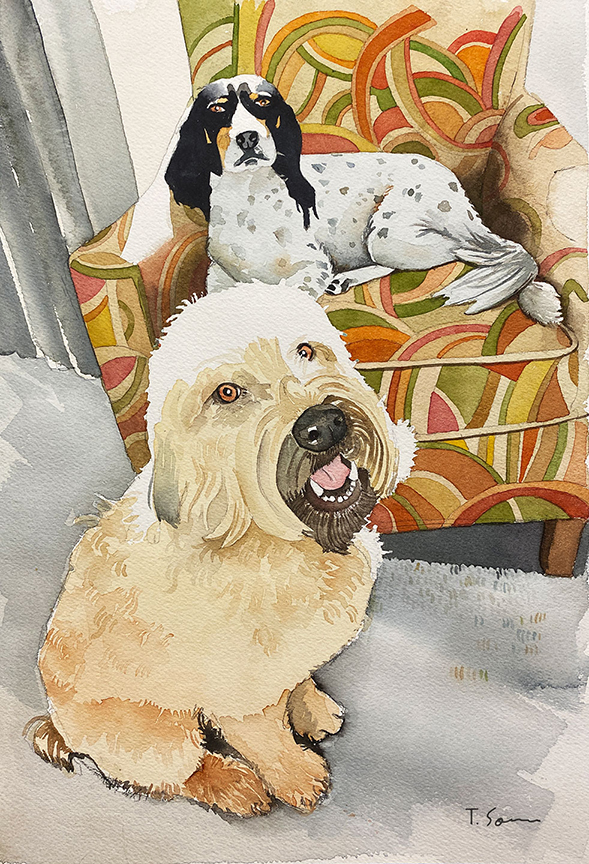 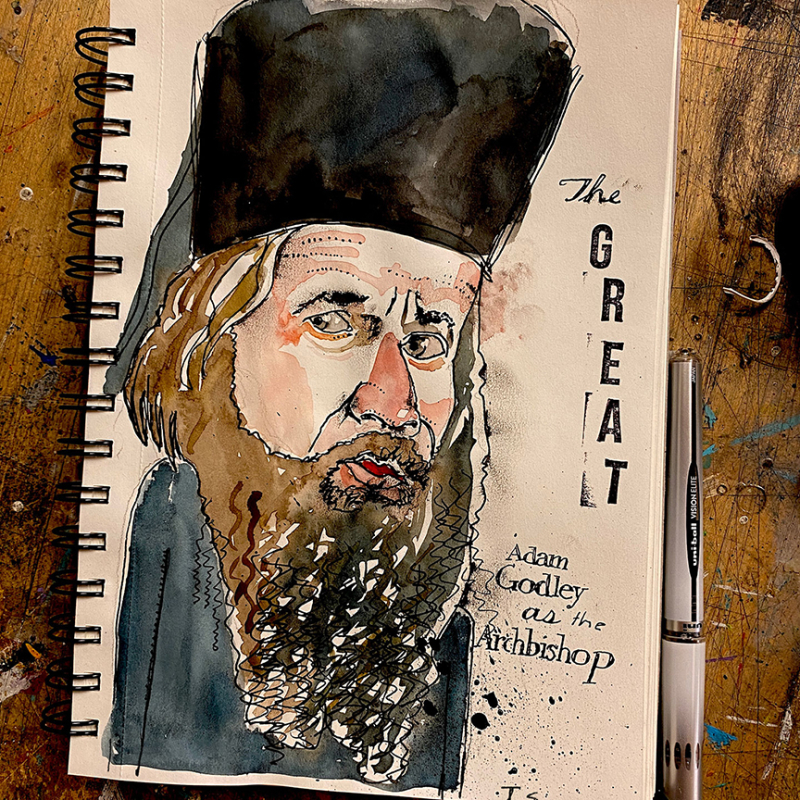 Watching "The Great" and the Bulls.

And lastly... all these "TIME IS RUNNING OUT" Emails. 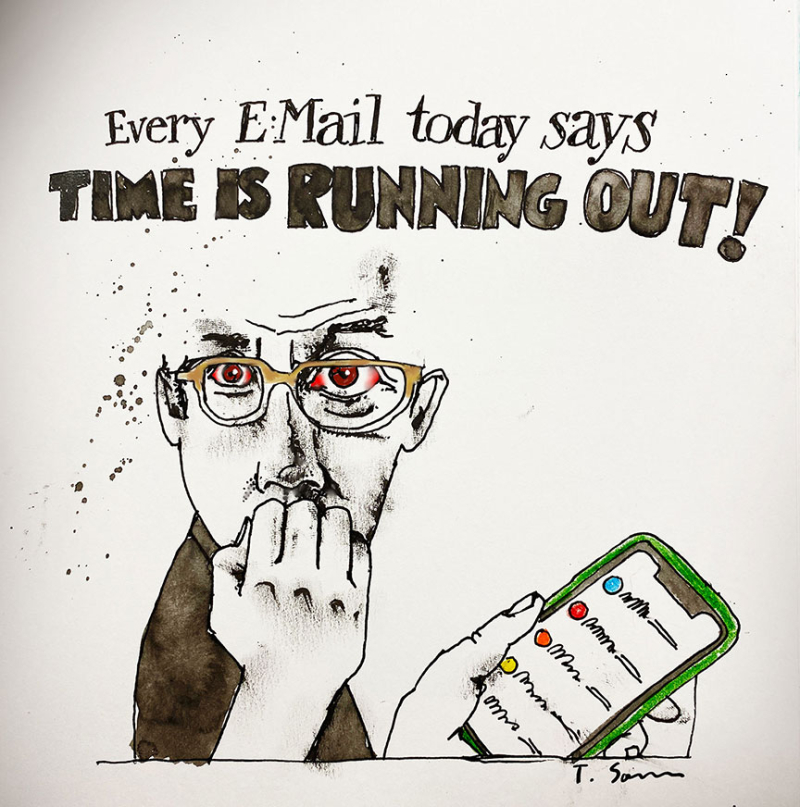 I realized they were all about the various sales, so... I guess it's okay.

Love the art! Especially the face of the dog in the chair! The ArchBishop is great, but I had to Google Godley. I'm pretty sure I've only seen one thing he has been in. The trailor for The Great looks, well, great! But I do not have Hulu. I would have Hulu if they still had the Marquee Network!

Anyway, I have noticed that nothing much seems to be happening with the Cubs. Am I just out of date that most of the off season moves happened in January/February? I've just been assuming that things would happen eventually.

My brother the Bears fan can't wait for Nagy and Pace to be gone. The sooner the better!!!

I bought some stocks several months ago. I now get lots of emails trying to sell me stock tips offering a special rate that is only good til midnight. Apparantly they mean midnight of some date in the year 2100 since the same offer will arrive tomarrow!

Hi Rich!
Thanks on the art front!
And so far the Cubs got a new backup catcher, Yan Gomes. Ex-Yankee outfielder Clint Frazier. And yesterday starting pitcher Marcus Stroman - one of the best remaining free agent pitchers for 3 yrs/71 mil. So... Stroman is significant!
Fingers crossed on Nagy/Pace.
And I thought at first you were talking about Packers stock!
I think all you have to do is google "stock tips" and you'll be inundated with that crap.