Cub Fan Bill Murray has another new movie out. 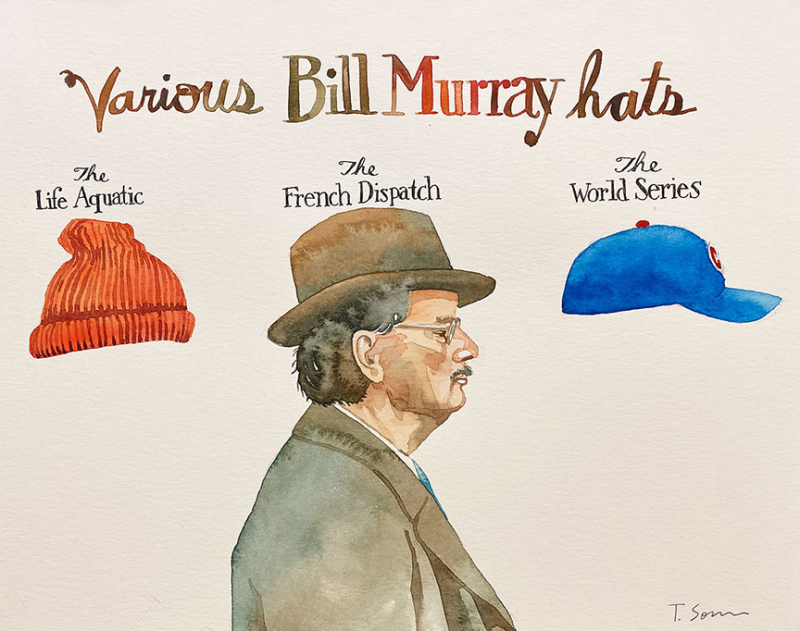 Hey man, I care about the '21 World Series.
Honest.
I'm so happy that all the rest of this year's baseball viewing will include the Houston Astros.
Seriously, that's just awesome!
I'm SO hoping they'll get some cool interviews with Astros owner Jim Crane, such a fascinating and glib personality!
He says they're past that whole cheating thing now, and he's right - it's been years since that happened.
If only I could stop hearing that garbage can banging.
But that's my fault.
It must be a phantom thing, like still feeling your arm after a shark gnaws it off.

And... that's the last time I'll talk about that stuff because blah blah blah.

I really am excited that the Braves pulled off the NL Championship, though.
Yeah the Dodgers staff really got eaten up by injury, but somehow I feel no pity.
The only guy I can stand is Clayton Kershaw, just because he seems like a standup guy.
But then those Hankook tire commercials featuring Kershaw come on for the 800th time and I wish I were in the economic circle of people who can throw cast iron pans at their tvs and just go buy another.
Uhh, where was I?
Oh yeah... of almost every playoff player, the guy who's this year's "the guy" is Braves' outfielder and rightful NLCS MVP Eddie Rosario.
He hit .560/.607/1.040 in these last 6 games.
Like driving from Chicago to Los Angeles and not hitting a red light.
Crazy impossible.
Plus 1st baseman Freddie Freeman, so fun to watch.

As far as the Cubs go, well... Cub Fan Bill Murray is in a new Wes Anderson movie, The French Dispatch.
Nobody makes movies that look like Anderson's.
And if you're a fan like me, you know his usual astonishing cast of characters - especially Bill Murray.
If you haven't seen the preview, it's here:

Can't wait to see it.

Okay, now there's this one last series then we'll be all goofy with WHAT WILL THE CUBS DO OVER THE WINTER TO TRY AND BECOME COMPETITIVE AGAIN?!
While I'm actually looking forward to whatever the Cubs do since they really HAVE to, it IS the World Series next.
Gotta watch.
Go Braves!

Half a loaf is better than none?

So, OK...the Ass-tros are in. But at least we still have the Braves to root for. I'd be a LOT more enthusiastic for Atlanta if they'd just make one change...

Get rid of that stupid, racist, annoying Oh...Oh...Oh tomahawk chop chant!!! Good Lord...it's bad enough if the fans generate it on their own. But the Braves organist actually prompts them throughout the game.

So we got rid of Chief Wahoo, the fighting Illini Chief, the Redskins, the Redmen and many others, but we still have this annoying "tomahawk chop" chant used by the Braves, KC Chiefs, and Florida State.

It's time to get rid of these throwback chants and just get on with playing the games. OK...off my high horse.

Hi Bud,
Yeah that chant never seems to stop.
Like those plastic horns fans were playing non stop during the World Cup.
So annoying.