Aaron Rodgers.
For like the millionth time, he came to Chicago and knocked the windy out of the city.
I've said here before that actually, I do not hate this guy like I do the Packers.
His talent is undeniable.
He represents everything the Bears are not, which mostly is that talent.
At quarterback.
And for most of my lifetime, Rodgers is just a repeat of another Green Bay quarterback.
Who beats the Bears over and over again.
This time, however, in the course of beating the Bears again, Rodgers dropped back to about the 15, pump faked, decided to run and carried the ball into the corner of the end zone where Eddie Jackson uselessly pushed him down, which, in keeping with the rest of the game, I thought for SURE would be a penalty.
It wasn't.
Instead, Rodgers got up, did his buckle thing, and then this happened: 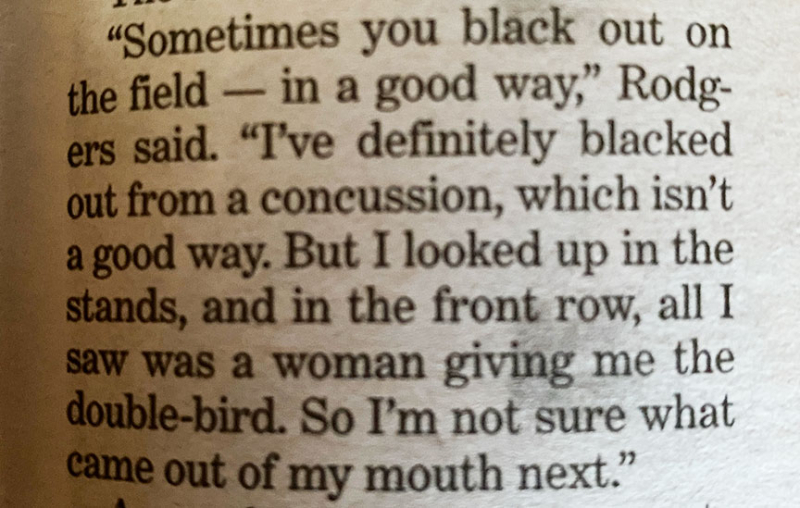 What came out next was, "“All my f#cking life, I own you. I own you. I still own you."
Full throated.
I'm sure you've seen it by now.
Which prompted me to play around with photoshop. 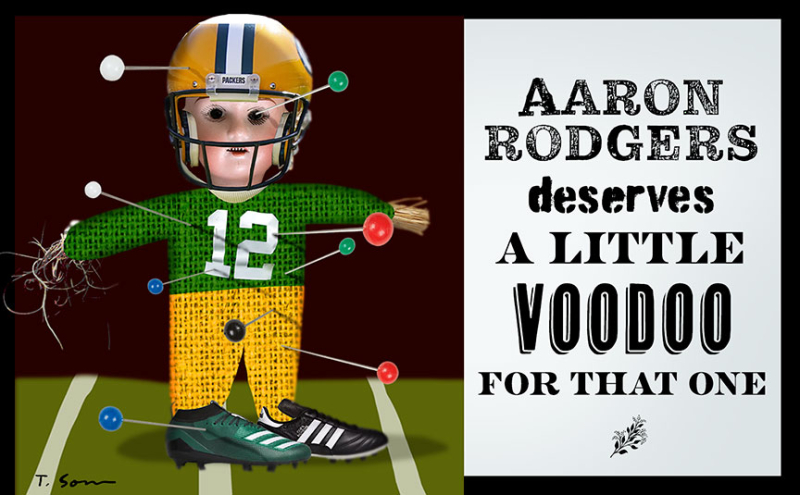 No, I don't want to see him seriously injured.
Just having what little fun a Bears fan with photoshop can possibly have when Rodgers beats the Bears again.

What else?
Did you stay up to watch the Atlanta Braves take their second straight from the Los Angeles Dodgers?
Corey Seager homers with Betts on in the first.
2-zip Dodgers.
Joc Pederson hits a 454-footer off Max Scherzer to tie the game at 2 in the 4th.
Chris Taylor doubles in the top of the 7th, knocking in Mookie and Will Smith, Dodgers up by 2.
Bottom of the 8th was just nuts, and by that I mean balls.
Eddie Rosario's on 2nd after singling and a Freddie Freeman fly ball.
Ozzie Albies hits a shallow bouncer to right, Freeman gets waved around (this is the balls part) by 3rd base coach and ex-Texas manager Ron Washington and touches home with his hand clearly on camera by about an inch.
In all that excitement, Albies forgets to take 2nd.
But then Austin Riley hits one over Mookie's head in center, and Albies has to hoof it all the way around third (where he's waved around again by Washington) and arrive at home the same time as the ball, but the throw's a hair off and bounces out of Smith's glove.
Both these runs (off Julio Urias) could easily have been outs and Mr. Washington the wrong kind of goat.
Instead, he's just fearless.
And in the bottom of the 9th with Dansby Swanson on 2nd, Rosario hits a miracle single up the middle that Kenley Jansen just missed, then bounced off Seager's glove and into center.
Swanson comes around, touches home and keeps running into the huge celebration.
Braves 5 Dodgers 4.
Kinda awesome.

AND, the Chicago Sky and Candace Parker beat the Phoenix Mercury for the Sky's first WNBA championship.
They're the best team in Chicago.

If there's a baseball God still on duty in this postseason, the Dodgers and Astros will BOTH end up on the trash heap! Yes, these are two teams I thoroughly despise:

2. Despicable team with a choo-choo train in the outfield playing in a ballpark named after orange juice that used to have a hill in the outfield, now home to trashcan banging cheaters (who may still be cheating, just not as blatantly) with an owner who basically said that the cheating really didn't matter and caused "no harm" to baseball.

Red Sox vs. Atlanta would be fine with me (except for the "tomahawk chant", that is)

If you can't root FOR someone, you have no choice but to root AGAINST some others. This is the current situation for we Cubs fans.