« Cubs and Bears, Wisdom and Davis. | Main | Cubs vs Cardinals weekend and the Ouch at the End. » 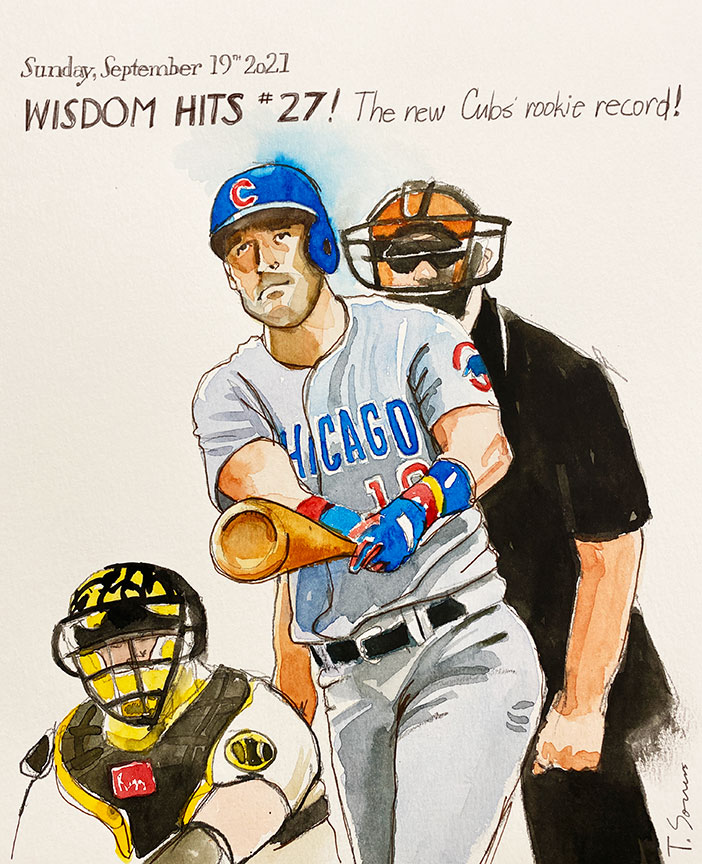 Cubs 6, Brewers 2.
What a nice way to finish the Cubs vs Brewers 2021 season.
The Crew obviously going to the playoffs and just overwhelmed the Cubs both pre and post the Black Friday Trade Deadline.
The fact that the Brewers won 15 of 19 games vs our favorite team... my calmer, less emothional self understood and understands the need for the Big Change that came and is now under way.
But wait, that last game!
Patrick Wisdom's not very rookie-like power won the day when he splattered a 98 MPH sinker to center field that knocked in Frank Schwindel and David Bote AND somehow managed to come to rest on this weird ledge that appeared to be maybe 25' off the ground.
Boog put it this way: "Patrick Wisdom Un. Loads."
That homer also broke Kris Bryant's rookie record, so good for him.

This other thing happened when old buddy Jon Lester gave up 3 hits and 2 earned over 6 innings and won his 200th game 5-2 over the Brewers.
Dwight Gooden and David Cone had 194, John Lackey had 188, Orel Hirshiser had 204.
It's not a super elite number like Greg Maddux' 355 wins, and I always enjoy repeating that Roger Clemens only had 354, but still winning 200 games is a gigantic deal and good for Lester!
But.. those DAMNED CARDINALS!
They're on a 9-game winning streak right at the right time, and now look like the team that'll squeak into the playoffs and piss off you and piss off me.
I can already hear the announcers breathlessly saying oh! Oh my! The Cardinals are peaking for the playoffs.
Nobody wants to play the Cardinals.
It's the Cardinals doing what the Cardinals do.
Which is why the end of this season can actually turn out to be delicious.
These games against the Twins and Pirates?
They count for nothing, except maybe Wisdom getting another dinger or two.
It's the next two weekends in a row that have all my attention.
Friday, Saturday and Sunday of this week and next will feature the Cubs vs the Cardinals.
This week at Wrigley for a Friday doubleheader, then a couple 1:20s Sat and Sun.
Next weekend at Busch.
For the Cardinals.. the rest of their games are against the Brewers, and the Crew's magic number is 3.
Once they clinch they might give key players a rest.
The Cards magic number is 10.
Just sayin'... I will be the HUGEST FAN of this current batch of Cubs if they can keep the Cardinals out.
Saturday will be Jon Lester vs. Keegan Thompson.
Sorry Jon, can't pull for you any more this year.
Go Cubs.