Patrick Wisdom is a teeny ray of Cubs fun. 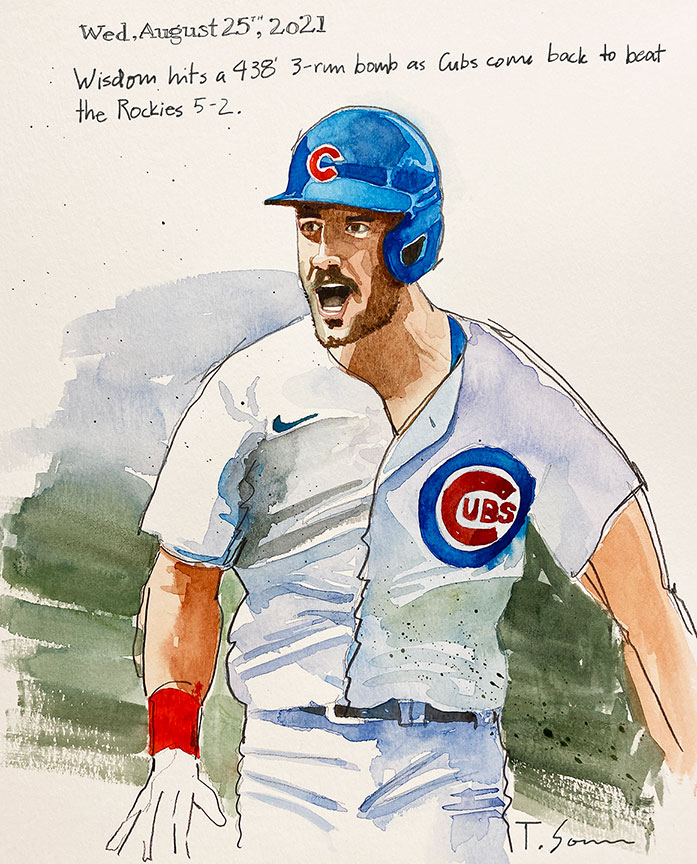 Patrick Wisdom is a 29 year old rookie who was a 1st round draft pic 10 years ago by the St. Louis Cardinals, then spent time with the Rangers and Mariners.
He's been on 8 different minor league teams from Batavia, NY to Peoria to Memphis, and been DFA'd 3 times (including once by the Cubs).
So when you see him laughing and smiling after hitting a 438 foot 3 run bomb, he deserves it.
When you see him dancing out on the field (I can't find the vid, sorry), he deserves it.
When he first came up and shocked us all with 6 dingers and got the NL Player of the Week, he deserved it.
And when people talk about him being in the Rookie of the Year conversation, he deserves that, too.
(Everybody says it'll be Reds' 2nd baseman Jonathan India, and if it is I suspect Wisdom will smile and congratulate him.)

I've been in a crap mood pretty much this whole month.
I went to a game last weekend, and thought... if bought tickets before the trade deadline and, say, had a plan to bring the family to Wrigley to see the Cubs?
Do you know how much money that is?
You'd be furious.
The pitching has been just brutal - Ross' honesty and patience in post game interviews is like... take a class from this guy, aspiring managers.
There's just... no reason to smile.
And yet there's Wisdom cranking a homer and having a blast.
Can't help but like the guy.
Here's what it says on Spotrack: "Patrick Wisdom signed a 1 year / $570,500 contract with the Chicago Cubs... Wisdom's adjusted salary with the Chicago Cubs is $401,777."
Will they re-sign him?
I would imagine so... all the bombers are gone, and if the plan is to switch up with guys who, for lack of a better term, "hit for average".. then a guy who may eclipse Kris Bryant's rookie (and all-time Cubs rookie record) HR record might be worth keeping.
He just hit his 21st, passing Tyler Colvin's 20, and now has Walt Moryn ('56), Geovany Soto, Ian Happ, Billy Williams and Bryant's 26 homers to beat.
6 homers in about 5 weeks?
Might be one of the happier stories from this year.

Last thing.
I saw an article (NY Post) that says hot dogs can take 33 minutes off your life, while peanut butter and jelly sandwiches "were associated with an increase of 33 minutes."
Immediately thought of how many dogs I've eaten at Wrigley, and how weird it would be without them. 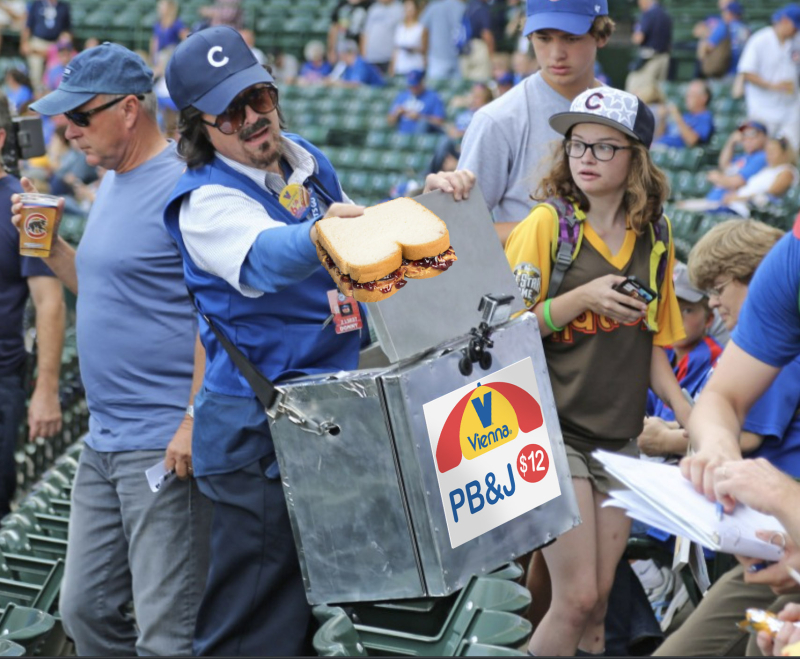 Okay, White Sox are next.
The Cubs should get creamed, which is why they'll probably win.
I didn't say that, though.

Nice job photoshopping in that PB&J sandwich over the hot dog. You even got the vendor box too!

Also funny seeing a fan wearing a Padres jersey with a Cubs hat. That immediately makes me think of Rizzo. She just needed a Yankees bracelet.

Hi Matt. The blog service is still not right, so I can’t “reply” but rather just comment under yours. Anyway, yes fun with photoshop IS fun. And that fan was in the picture when I googled something like “hot dog vendor Wrigley”. Her outfit is soooo confused and wrong and yet entertaining!

At the pace he has hit them this year, he would hit 47 in a full season. The same pace should give him 8 more, for 33 and the club record.

And he'll just laugh and dance.

Rich! Yeah, I think he's gonna definitely get that Cubs record! That's nuts! Hot dogs are probably not that much. I literally bought one there 2 weeks ago, and was so bamboozled by the app I had to use to purchase it, I didn't notice the price. But pretty sure it's breathtaking even if it's only $8.