« The Kris Bryant Suspense is killing me. | Main | Cubs vs Cardinals. Time to make some fun. » 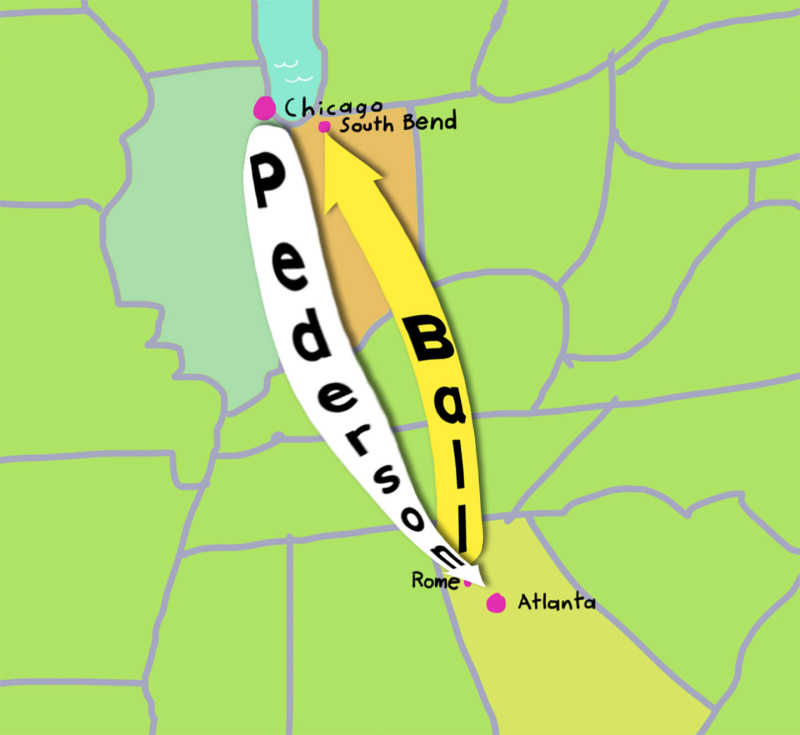 I'll try to update this map as the trades happen.
Yesterday Joc Pederson was traded to Atlanta, who gave up their 12th-best prospect, a power guy named Bryce Ball.
You've probably heard by now that his nickname is "Ball Bunyon", which is awesome because there's such a lack of great nicknames any more.
So... I'm actually relieved that this has started, and this first one seems to be not bad for the Cubs.
Honestly, you can go read all the grading on the trades as they happen, but it's all hot air until time tells the truth.
So I'm not gonna wail over the actual trades as much as I'll be just bummed at losing people I've come to love as ballplayers.

I know we're all in love with our guys, but we may be surprised/disappointed at what other teams are willing to give up for them.
Other GMs just knowing the Cubs have to deal or risk losing players for nothing is not an ideal way to begin negotiations.
To me, about the only player the Cubs can sort of deal with a sense of authority is Craig Kimbrel. Playoff teams all need what he's got to offer, and he's got another year on his contract.
Otherwise... who knows.
Scary.
Heartbreaking.
We have to deal with it.
I was becoming a Joc fan not really because of his bat but more because he was kind of a goof and fun to watch.
But he's gone now.
Maybe he'll be able to help the Braves in the wake of the Acuna injury, do something special.

The other thing that happened yesterday... 6 Yankees, including Aaron Judge, all tested positive for Corona.
So we'll all be watching every All-Star since he may have come in contact with Judge at the game/festivities.
Yuck.

Okay tonight it's... baseball.
Kyle Hendricks against Madison Bumgarner, who's ERA at home is freaking 7.15.
Steve Stone used to say: "Let this be another lesson for all you youngsters out there..." and then he'd talk about some example for how to do something correctly in the game of baseball.
If you recall, Bumgarner was elite elite, then wrecked on a dirt bike, hurt his shoulder, and even though that was years ago... just let that be another lesson.

And on the home front, just imagine how difficult it must be for Bryant, Rizzo and Javy to concentrate on tonight's game with all this trade stuff floating in their faces.
Like if you had a big meeting to prepare for in a couple days while everyone in your office was talking about a big layoff rumor.
Weird.
Awful.
Anyway, the game's on pretty late, but I'll catch at least some of it.
Maybe it'll be the last time I see some of these guys as Cubs.
Not even sure why that's important, but whatever.

We've reached the point where the biggest consideration for teams (and we fans) is which players are in their "walk year", which teams may want to "rent them" for 3 mos., and how many borderline prospects (future trade fodder) we can get in exchange. What ever happened to developing talent and keeping it?

I guess I'm an old fogie... but this isn't the baseball that I grew up with. Right now, I couldn't name 10 guys I can expect to be playing for the Cubs next year.

They just figure we'll keep watching, buying tickets and loving our team....whoever they may be.

My give-a-shit-o-meter is running pretty close to zero right now!

Hi Bud,
Yeah, I know.
Its the crap you gotta put up with that hopefully pays off with another WS.
But the angst, Bud.
Tha angst.