Cubs 8 Cardinals 5. Reminds me of another come from behind win in '03.

Well hi.
Been awhile I know - we just got back from a trip.
I dragged in suitcases and was treated to what I'd guess is the most enjoyable and satisfying Cub win since that one night it rained in Cleveland.
First off, the crowd.
From the moment the game started, I completely forgot about the pandemic (and having just gone through the airport/flying experience, that's saying alot).
A one twenty game on a Friday is already a bonus - it's The Big Cheat into the weekend.
But there was something about the crowd at Wrigley that instantly turned... the normal-ness of the picture just made the abnormal-ness of the past year disappear.
Then, the drama of coming from behind against the archest enemy.
Sure, on top was the super-fun Joc Pederson dinger and that trip around the bases, soaking in all the adulation a Wrigley crowd is capable of.
He's a parading party, that guy, and energy-wise I'd say he's kinda this year's Nick Castellanos with much worse facial hair.
But the drama meat came in the 6th, when Anthony Rizzo had the kind of at-bat old people will be talking about in bars 20 years from now.
Strike, foul, ball, foul, foul, foul, foul, foul, foul, ball, foul, foul, foul, homer.
My buddy Sutter was there, and GOD am I jealous.
Fourteen pitches, twelve of them with 2 strikes, then a freaking homer.
To tie the game.
It's own mini Cub/Cardinal game in the middle of a Cub/Cardinal game, and the Cubs won.
Spoke to my dad afterwards, and he said all the way out in Arizona you could feel this game was gonna be a blue W.
So I'll be working on some kind of painting for that soon, but for now the only "art" I have came from the texting wars with Dickie the Cardinal Fan.
Too many steps to describe each, but I kept sending photoshopped pics to dig at him, each building on the last.
And the final looked like this: 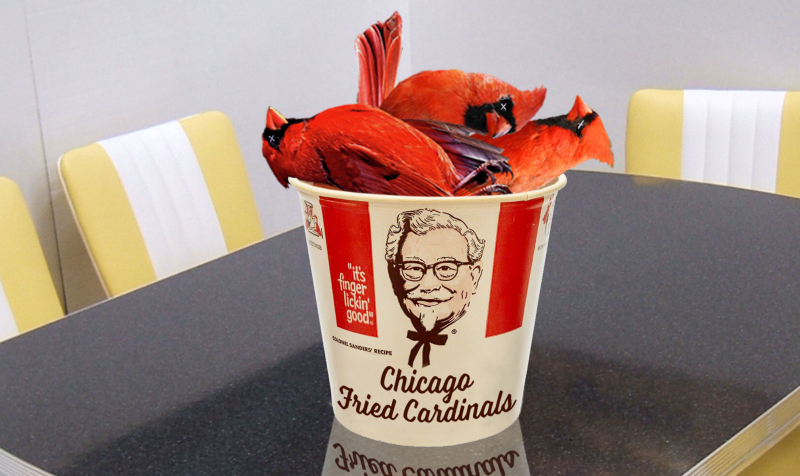 I'm still buzzing from it.
This whole... the last couple years have been leading to July 31, 2021, right?
That's the day Kris Bryant, Anthony Rizzo, Javier Baez, or any combo of those guys will be traded, The Core changed forever.
I've been preparing for that scenario so that I don't lose my mind when it happens.
And I keep looking at the upcoming schedule and saying well, we'll know alot more about this team after they play blankety blank.
But then, they play blankety blank and you know what?
The Cubs keep winning.
Everyone knows the West Coast rules the NL this year.
Everyone.
In April if you said the Cubs would be 9-4 over the West's Big 3 (Dodgers, Pads and Giants)... THERE IS NO WAY THAT COULD HAPPEN.
And now with this gigantic win over the Cardinals... yes there are SO MANY more Card games to come but still... this is the game that made me change my mind about all that crap I just wrote.
Because it felt like the Moises Alou game in '03, when everything changed. (And the year Buzz Bizzinger wrote "Three Nights in August" about the Cubs/Cards which you need to read if you haven't.) 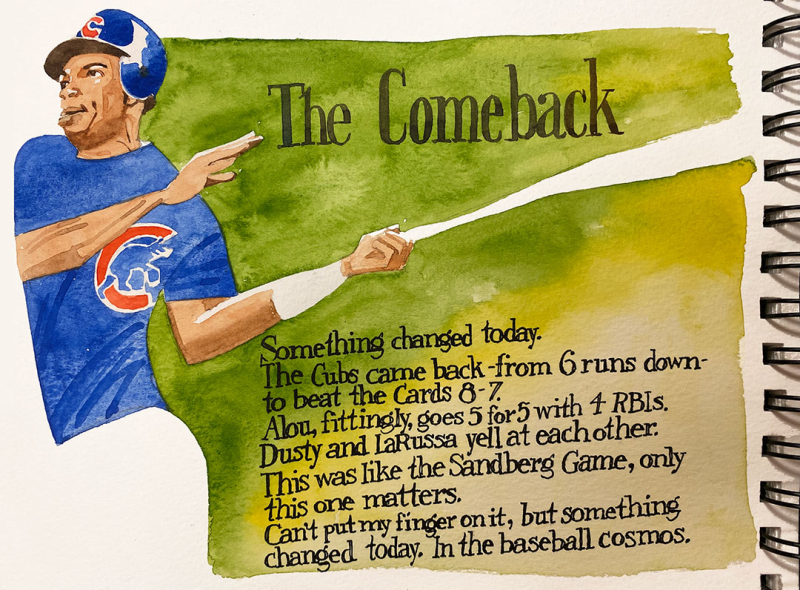 Here's the box from that game on Sept 3, 2003.
Lots of similarities.
Instead of 3 homers from Aramis Ramirez, Alou and Alex Gonzalez, it was Pederson, Rizzo and Willson Contreras.
Cub pitching in '03 started with Matt Clement giving up 4 runs before 4 relievers came in.
Yesterday Kohl Stewart gave up 5 before 4 relievers came in.
'03 closer Joe Borowski shut 'em down in the 9th with 2 Ks, '21 closer Craig Kimbrel had 1 K.
But it's the feeling you get from both.
The Cubs... man.
They could win.
So I've changed everything in my head.
I now actually believe Jed Hoyer when he talks about adding rather than selling in July.
I mean, yeah yeah yeah I know it's only June.
But yesterday's win has given me a new kind of Cub confidence I haven't felt in a long time.
A hope.
A real hope.
Weird.

Okay complete change here.
If you ever get the chance to go to the Sequoia National Park and see the Giant Forest, go.
This was on my bucket list, seeing things that have been alive for 2-3 thousand years.
If you look close, those are people walking at the bottom of this pic. 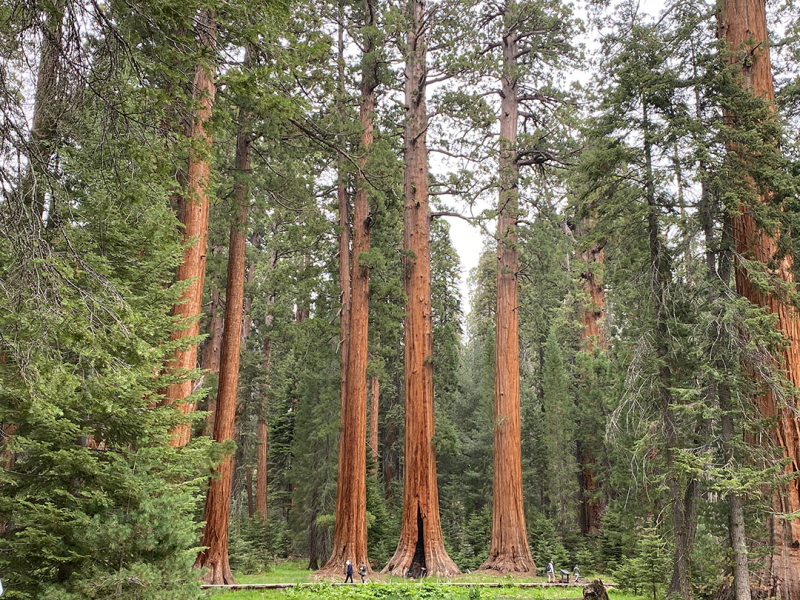 I had my computer but forgot crucial attachments I need to post so... that and what was going on in this picture are the reasons why I missed so many games.
Tonight?
It's a Saturday night and there is nothing I'd rather do than more Chicago Cubs vs St. Louis Cardinals.
Go Cubs.

And then how about taking game 2 on Saturday? Will Sunday be an encore? Why not?

Hi Bud. Man I am perusing Stub Hub as I write. If I find something good, Im so going tonight. The day is gorgeous and how many times do you get a ticket to the possibility of a sweep over the Cards?