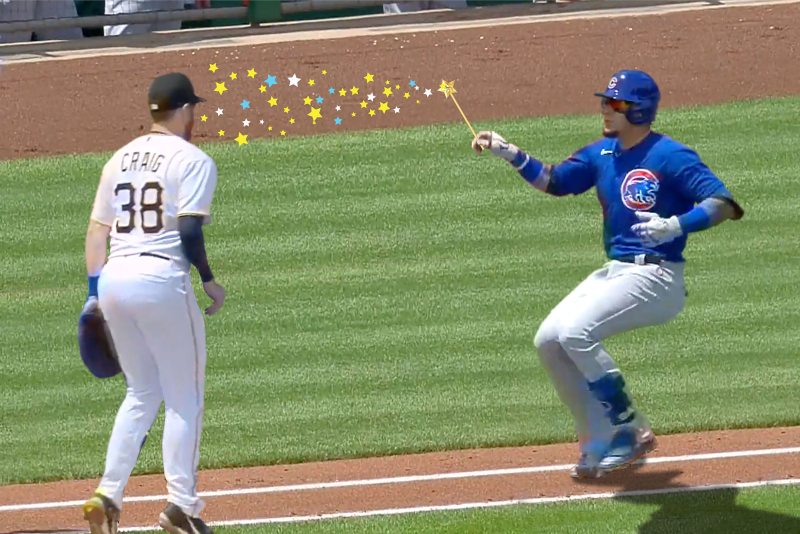 Well if you haven't seen the actual play by now, you were probably out riding the Mars Rover.
Like a complete ultra-maroon, I was painting.
I got a text that said, "Did you see Baez?"
Which meant that A) I forgot to turn on the tube and B) I thought for sure there was some awful Javy injury.
I found the play on Cubs.com and went into a black hole.
Sometimes I wander on Instagram and like, 45 minutes go away somehow.
That's what happened here.
There is no way to know how many times I've watched what Javy did on the base path.
I had it on my phone while watching the rest of the game, a Cub W that keeps them .5 behind the 1st place Cardinals and brings the W streak to 4.
What happened to poor Will Craig?
Guy's only 26.
It looks like he played 1st and 3rd in the minors, and the Pirates brought him up... oh no.
Yesterday was his 13th game.

No matter what you do - I mean it's baseball here but it could be any job or activity, really... when you experience something for the first time you'll be thrown off your game.
But this?
A guy running away from first base?
This was something NO ONE had seen before.
No one.
Not Boog or Pat or you or me or my grandfather.
It didn't make sense and Craig became hypnotized or something.
A spell.
And now, that'll be a 2021 highlight on any baseball reel forever.
Craig was hoodwinked by one of the most playful and creative players we'll ever see, and I hope the kid gets over it.
It wasn't his fault.

Okay.
Today it's an Alzolay 1:20 start vs the Reds, but if they play today I'll be amazed.
The weather SUCKS here - it's freezing out - windy and supposed to rain all day so... I just have my doubts that it happens.
Only notes really are... crazy Amir Garrett will for sure pitch during this series (you remember how he went off on Anthony Rizzo, right?).
His suspension was reduced to 5 games.
And the other thing is (NOT LOOKING AHEAD NOT LOOKING AHEAD NOT LOO) after the Reds, the Cubs' schedule becomes... challenging.
They'll have 3 at home against the Padres (32 wins in first place ahead of the Dodgers), and then go on a week-long West Coast trip for 4 in San Francisco (30 wins in 3rd place behind the Dodgers), fly back and after a day off play 3 vs the Cardinals at Wrigley.
Maybe JHey or Duffy or SOMEbody can get off the IL and come help because right about then I'll be thinking deep thoughts with Lloyd Bridges:

I just had to hop on to CB this AM to satisfy my curiosity. How the hell will Tim Souers find a way to create a visual of what el Mago just did???

Well sir - you did it! A picture is worth a thousand words!!!

I swear, Javy is inside the head of most MLB players: Oh shit, it's HIM!!! Should I try to tag him? What if he does that dipsy-do off-hand to the bag switch? Oh boy...I've got this base stolen! But wait...oh shit, it's HIM! I better slide waaaay off the bag and then, um and then? Oh shit I missed the bag!!! Son-of-a-bee! What's that clown up to NOW? Is he really gonna try to steal home? I better hurry up and deliver this pitch. Oh shit! It's a GD wild pitch - @%*&@!!! OK "el Mago" - 2 strikes. You're finished! Here comes your sucker-pitch - low and away, out-of-the-zone! Holy shit... he HIT that freakin ball! Holy shit...a HR on THAT pitch!!! It just ain't fair!

The picture is right on, for sure!!

Javy is a baseball savant. What instincts!

The shot of the dugout was priceless. Baseball is fun with Javy for sure.