SO MUCH GOOD HAPPENED!
After the general bummer of injury and loss against the Reds, the Cubs pulled off some seriously amazing wins.
First, however, we found out that Nico Hoerner, Jake Arietta, and Dan Winkler all go on the 10-day IL while Ian Happ is just "day to day".
Hoerner gone with a forearm strain (probably from his on-field car crash with Happ), Arietta has a cut on his pitching thumb, Winkler with "tendinitis in his right triceps".
The replacements were Ildemaro Vargas to come play the infield, Kyle Ryan for the pen, and Keegan Thompson is to start the second game against Trevor Bauer, last year's NL Cy Young winner.
Game one was our struggling Professor Hendricks vs Clayton Kershaw.
Looking in the morning, these games didn't have alot of promise.
Game one starts with Mookie Betts hitting a lame-o grounder to Javy Baez, but he duffs it, Betts is safe and Javy gets charged with error one of three.
You've GOT TO BE KIDDING ME JAVY!
Just GREAT now it's Corey Seager, who looks at a ball and a strike and then hits into a double play.
There have only been 5 pitches.
When Turner grounds out, Hendricks has 11 pitches.
Now oh GREAT it's Kershaw who... well he pitched 1 inning and was done.
39 pitches including a Bryant double, a Rizzo single/rbi, and then David freaking Bote hitting a bases clearing double for a 4-zip Cubs lead.
Everything changed right then.
I looked at Twitter and people were already talking about a sweep.
Hendricks goes the distance and only gives up one stupid homer to pinch hitter Keibert Ruiz, but what happened next is still cracking me up.
A dad carries his kid, with the home run ball, to the edge of the bleachers so the kid can throw it back. 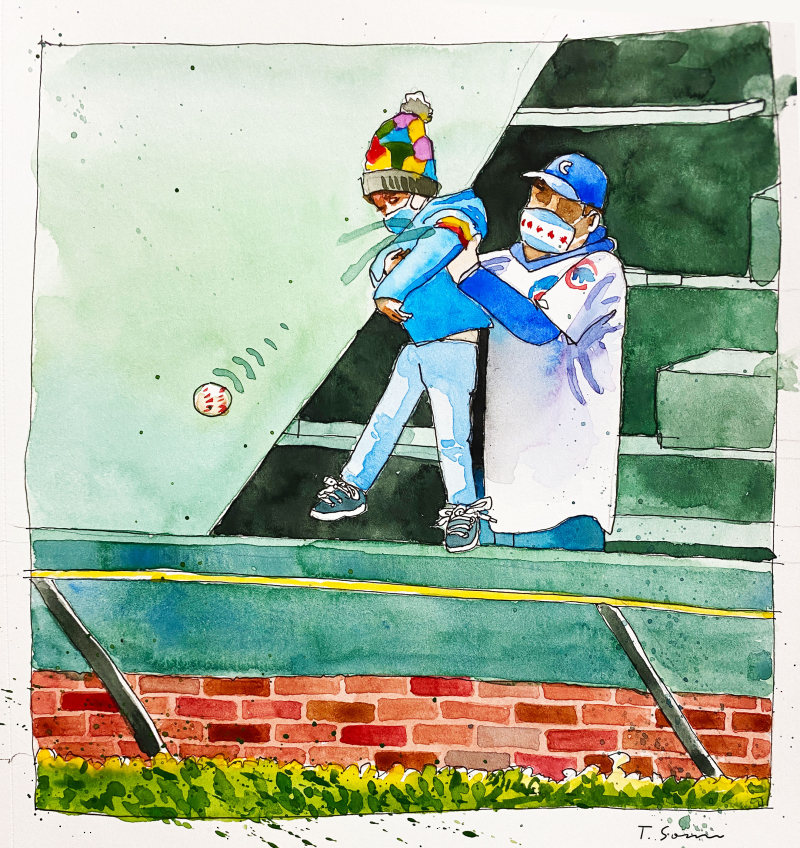 That's... just fabulous.
When they talk about letting the kids play and show some emotion?
THAT'S WHAT I'M TALKING ABOUT, KID!
Cubs 7 Dodgers 1 and it looks like we've got our Professor back!

I don't have time to go into detail on Game 2, but suffice it to say that even MORE surprise at young Keegan Thompson stepping onto the mound and going toe to toe with Bauer for 3.2 innings of 2 hit, 2 bb, 2 K ball.
That doesn't usually happen, right?
Anyway, huge comeback for the Cubs with a 2-run homer from Baez to tie it up, and David Bote coming up with the big single to drive in the winner.

No one saw this coming.
But did you not go to bed with a huge smile last night?
Okay gotta run.
Go Cubs.

I certainly did not see a sweep of the Dodgers coming.

I am not a fan of extra inning night games! I stay up too late as it is, those games don't help!

But, as you say, that's two nights in a row going to bed with a smile!

Dad teaching his kid to throw the ball back is AWESOME!!

RICH! Yeah the late nights... but this off day couldn't come at a better time! I LOVE walking around in a great mood for a day of no worry whatsoever!