« Lester, Schwarber are coming to Wrigley tonight. | Main | A quarter of the season in, it's FINALLY Cubs vs Cards time. »

First off, I got this email a couple days ago: 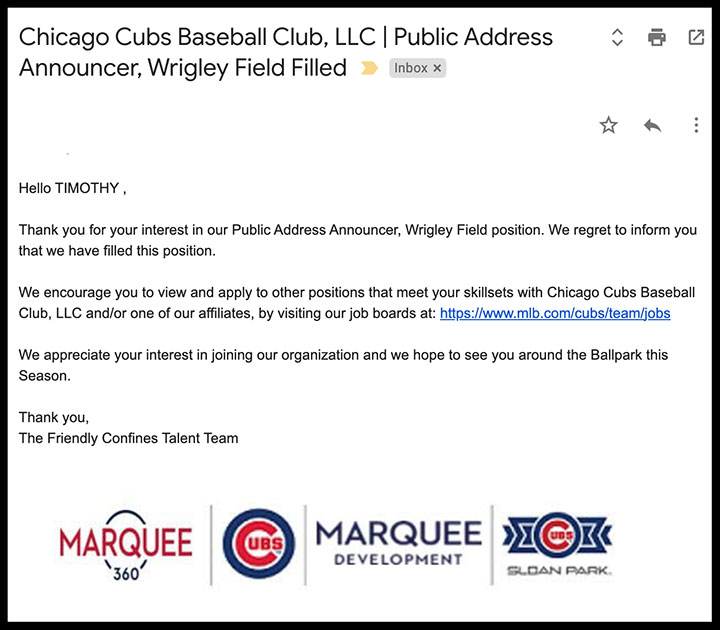 WHATEVER MAN, it's totally Wrigley's loss.
Seriously, we did get to hear the new guy, and he was... already just part of the park.
Perfect.

So... I met my trusty Cub-Buddy Sutter at Murphy's before the game, and he was in turn meeting a friend of his, Steve Goranson, who's daughter was also there. Lecy Goranson, who played Becky Conner in "Roseanne" and "The Connors". I have an embarrassing past when it comes to celebrities (remember Morgan Freeman?), but she was so normal and real I never really had the chance to dorkchop out.
They were both super cool, crazy-huge Cub fans and full of awesome sports stories.
The night was off to a great start.

Pretty sure you know the Cubs won big, hit 3 homers, had great pitching, and honestly there is nothing like being at Wrigley when Nico Hoerner tackles a line drive from behind, cooly stands up and throws out Starlin Castro. Oh yeah and the bases were loaded. Oh yeah that play saved at least 2 runs. Watch it here. Only 11,000 people got to see that happen in front of them.
I was SO LUCKY.

Here are some pics. 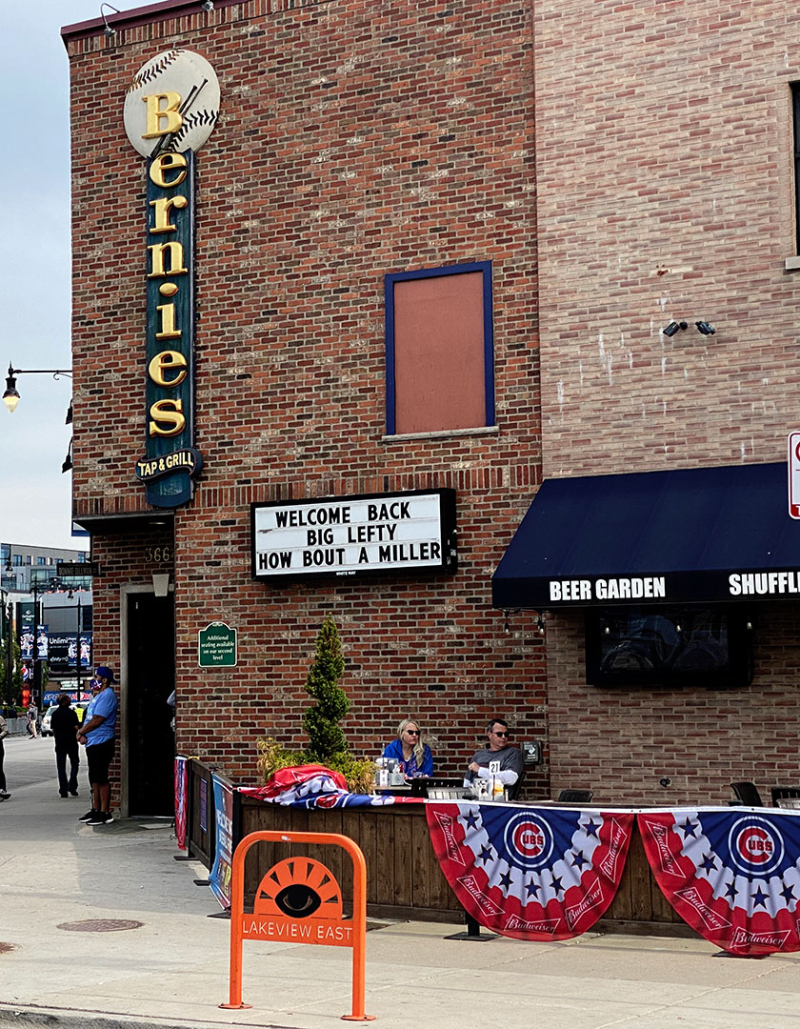 Bernie's had the same idea I did, but I don't think Jon Lester was in the mood after this one. 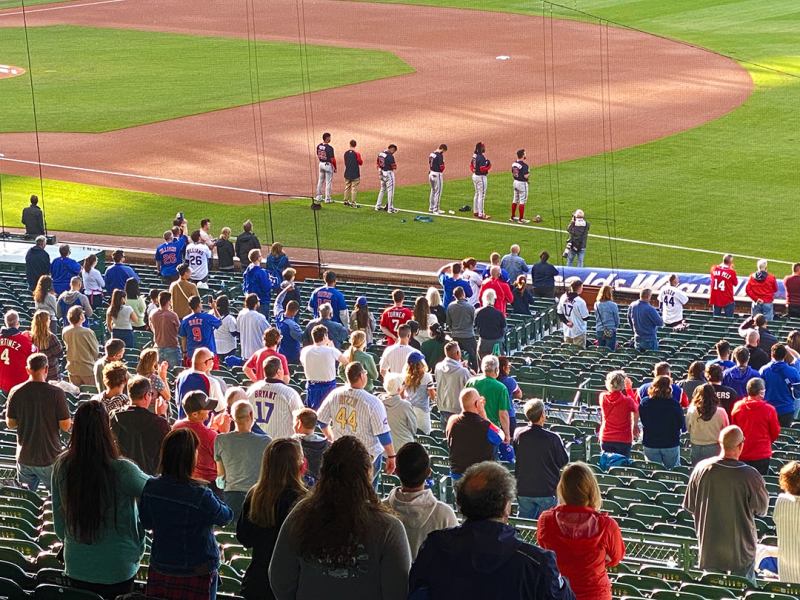 We walked in as the National Anthem came on.
It had been kinda on and off overcast, but the sun came out. 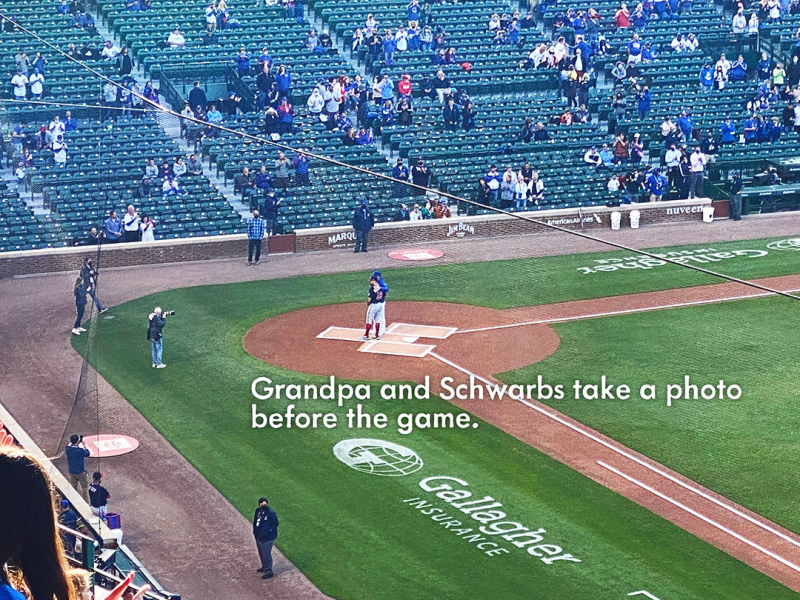 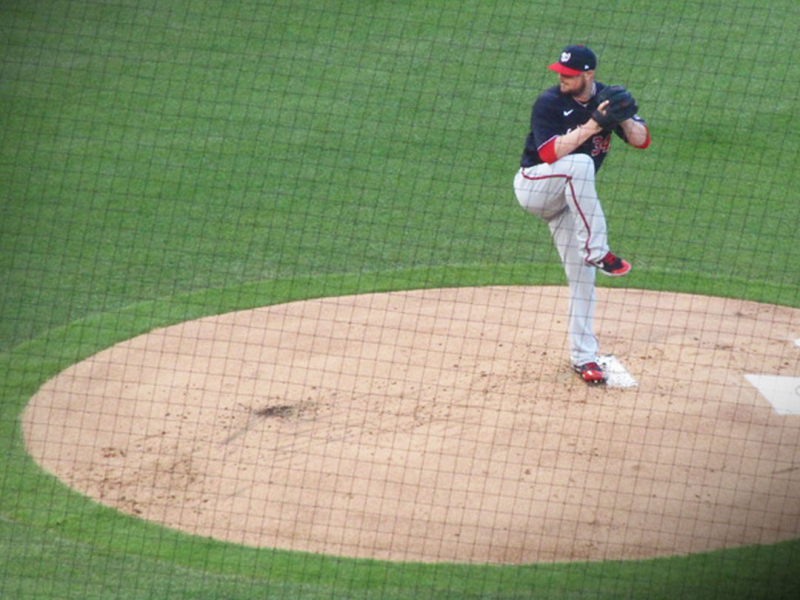 Lester looked just like Lester, only with funny clothes. 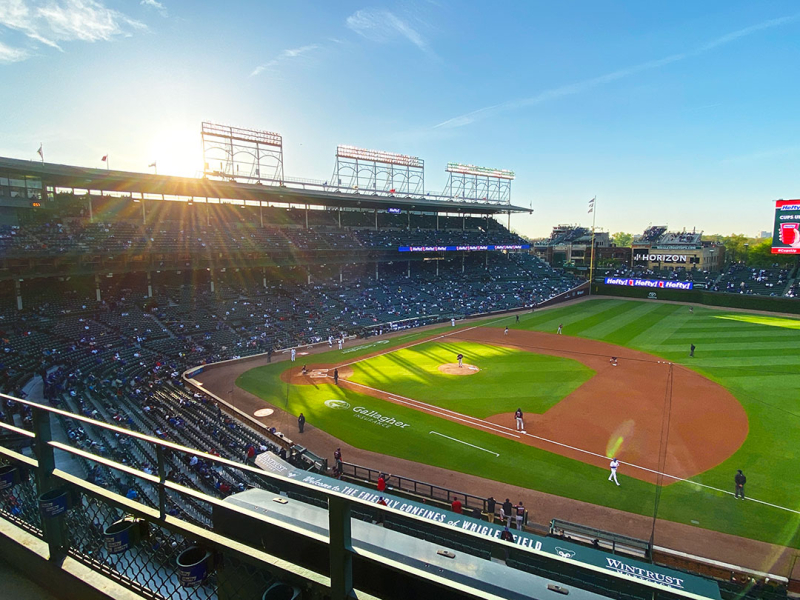 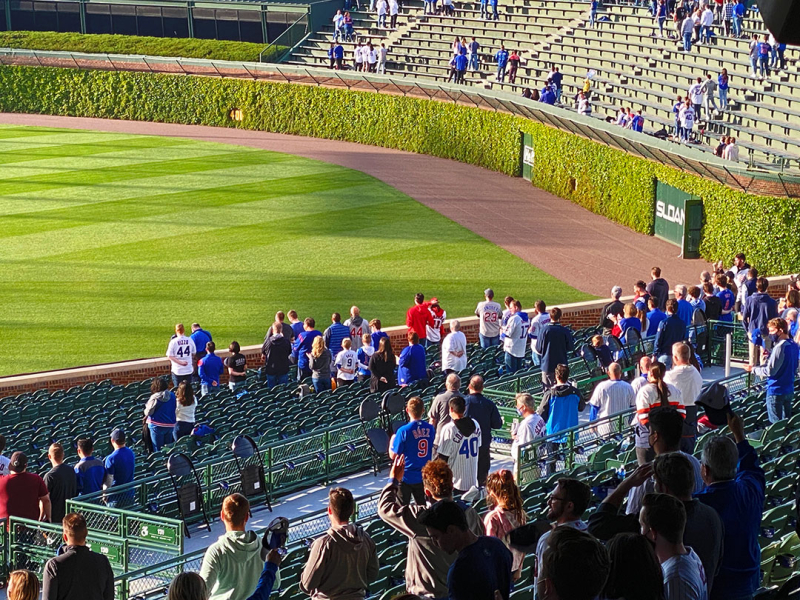 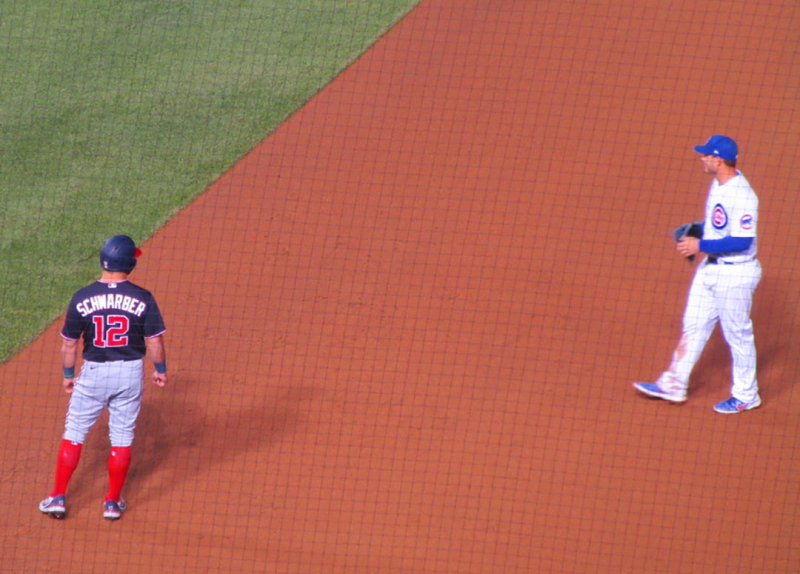 Rizzo and Schwarber razzed each other. So fun. 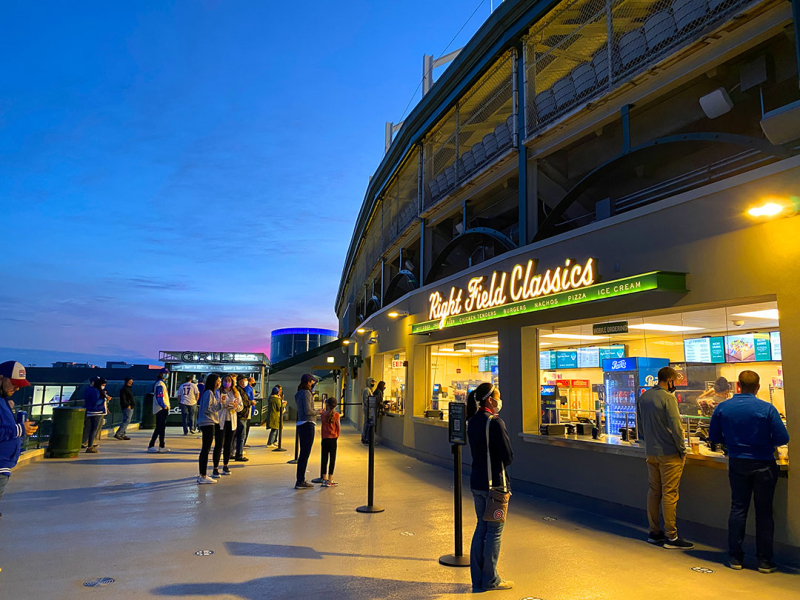 Got a Polish with grilled onions. 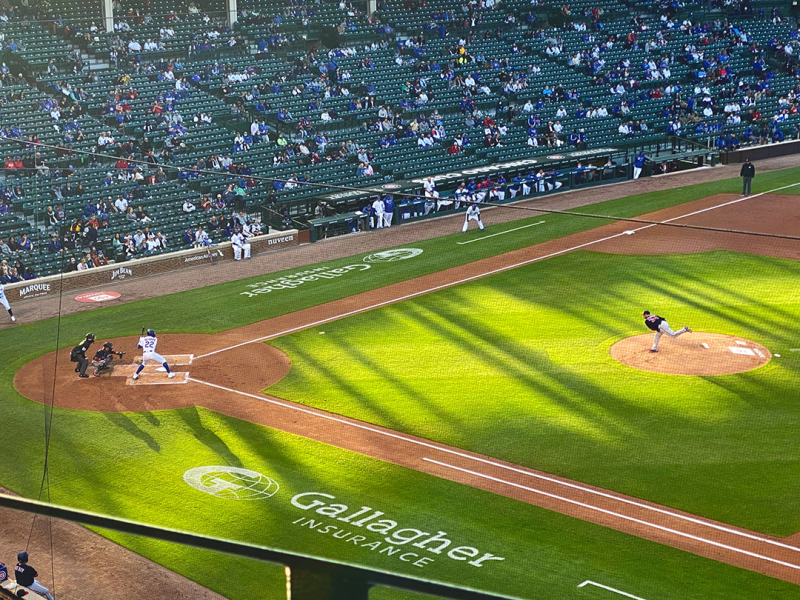 If you look close, Lester's pitch is about 3/4 on the way to Heyward.
He would put it over the left field wall.
Homers are just nicer when they happen with those shadows on the field. 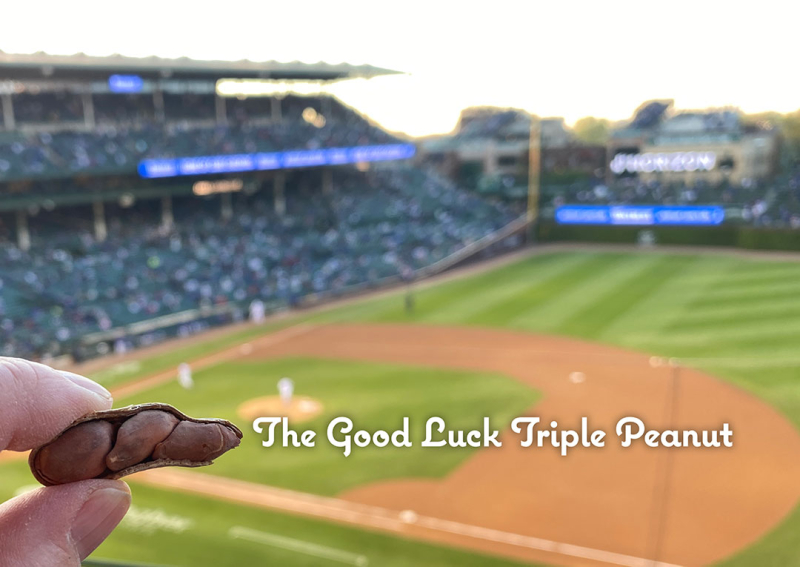 Not saying I had anything to do with any of the dingers, but yeah I am.

Took a quick vid of the center field bleachers, where only the fully-vaxxed are allowed.
No social distancing or masks out there, and man they were loud.
No idea how it works, but that REALLY looks like fun. 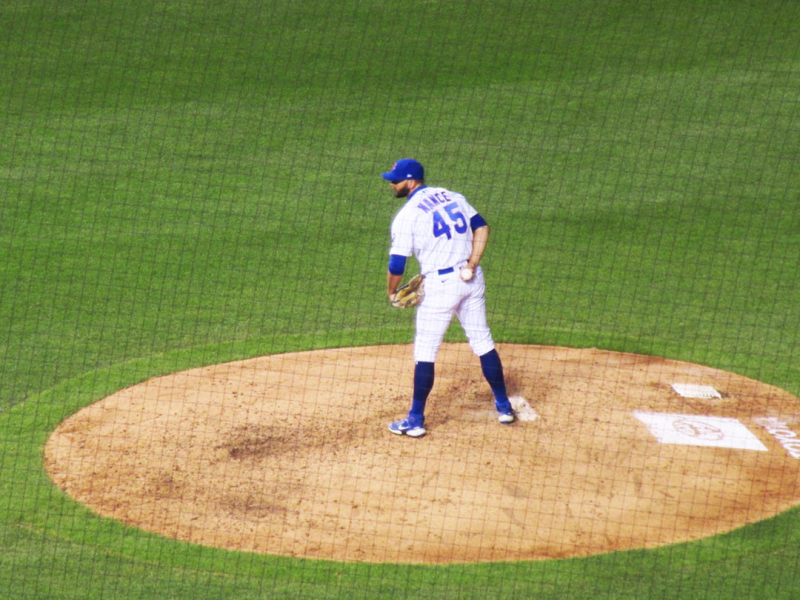 Grandpa brought in this guy to close the game out.
Everyone was saying what? Who is that?
I looked him up after the game: 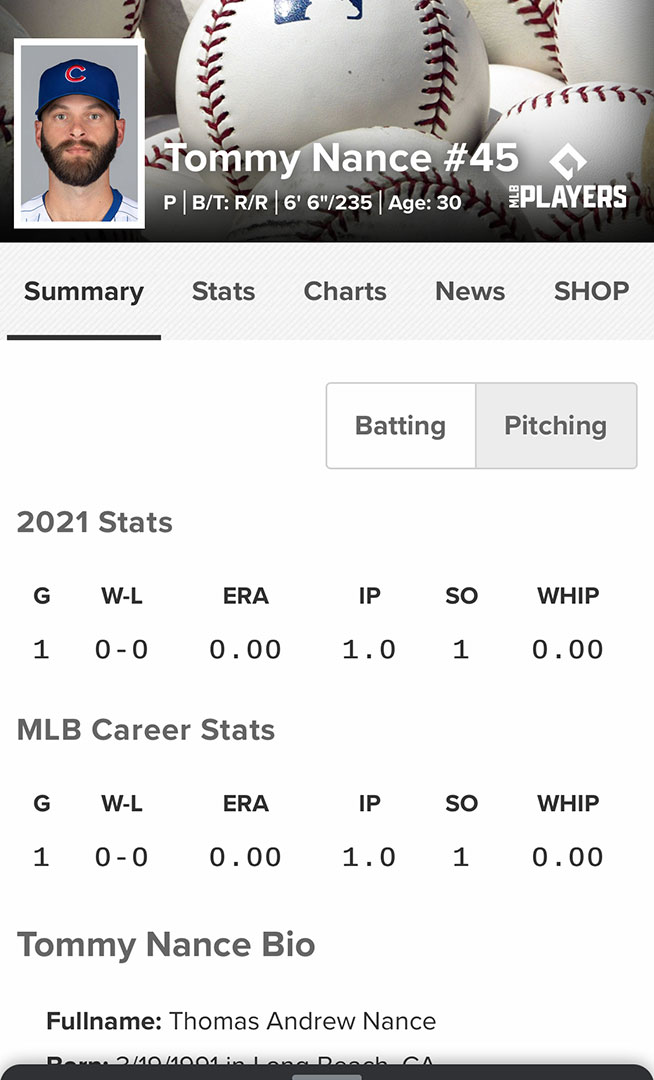 He came up when Mills went on the IL.
He looked really good and now?
Well will you look at that - 7 hours ago he got a Wikipedia page.

Anyway, a gorgeous night at Wrigley and I wish you all could have been there.

I watched every minute. The fact that you were there makes me more than just jealous...it makes me super-happy for you! Sorry about not getting the PA announcer gig, but the "new guy" (name?) sounded pretty darn good. You gotta be born with a voice like that!

Anyway, what a nice game. I'm absolutely certain that this was the first time I was EVER happy to see an opposing player hit a dinger. I think I yelled 'SCHWARBS!!!" The Rizzo super-casual play at first on Lester was hilarious! The Hoerner play on the bases loaded rocket by Castro was as smooth and athletically-gifted as any I've seen in a LONG time!.. not sure, but it may have saved the game, IMHO.

And finally, it's been a long time since I saw a Cubs pitcher I never heard of (Tommy Nance) make a 9th inning look like a piece of cake: 11 pitches, 9 strikes, ZERO nerves! This guy is 30 years old? If he throws anything like that for the rest of his career, those Independent league games (and salary) will be a distant memory for him!

Oh Bud you shoulda been there!
And winning 5 or 6 in a row starting today would mean a sweep in St. Louis.
Hmmm...