Dear Cubs: What Is Happening? 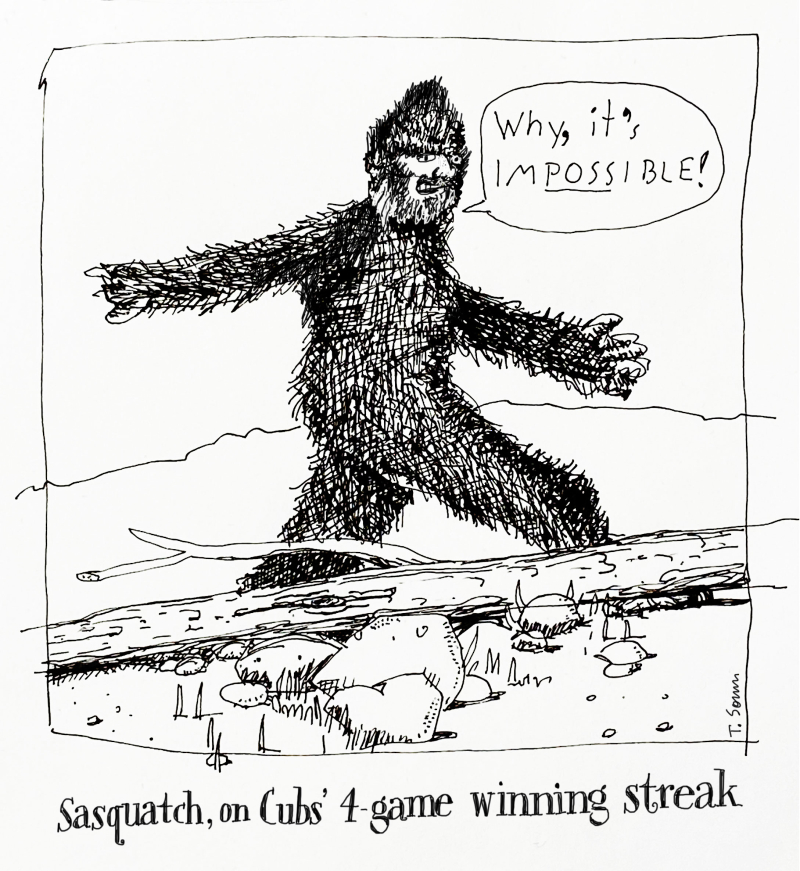 You expected some kind of correction with the bats.
How many Happ or Rizzo screaming liners went straight into a glove instead of falling somewhere?
But 55 runs in the last 6 games?
When they'd only scored 34 in their first 13?
A SWEEP of the 1st place Mets?
Even Sasquatch can't believe it.

Also, I wish I'd been keeping tabs, but does it not seem like the Hand of Baseball Gods had been reaching down to screw with the Cubs at the beginning?
Like the Cubs could NOT catch a break?
And now, they sort of saddled up on a unicorn and everything's coming up roses?
Happ still can't catch a break, but... Javy Baez?
He still looks so lost at the plate to me, and yet he more than doubled his season hit total in the last week.

Okay for SURE I'm being super jinxy so I'll shut up about that.

But how about the bench guys?
Marisnick with the triple the other day, the bases-clearing double and homer yesterday?
Nico Hoerner taking Pederson's place and ho humming a couple doubles yesterday (I may paint that leaping superman slide into 2nd).
Matt Duffy and, as Grandpa put it, his "quality at bats".
And not technically but Jason Heyward.
The Mets load the bases with 1 out in the 10th and hit into a double play, then the Cubs load the bases with 1 out and J Hey comes off the bench for the first time in a couple days and smacks the game winner.

The last lucky thing I'll speak of today: Boog Sciambi.
I cannot BELIEVE how lucky we are to have him.
So entertaining, SO good with J.D. (who's funnier than EVER), SO informative.

I went for a walk this morning, out in the park listening to a podcast.
Suddenly my phone stopped working.
I looked up and this metallic-silver object landed not 20 feet from me.
Little greenish guy with huge eyes stepped out of it and said, "Dude. The Cubs might be better than you thought."
Weird, huh?

1:20 today. Cubs vs Brewers, and should they get a chance to pile on another 15 runs I'll happily watch every single one.