« Despite contractual angst, there's alot of Cubs Spring goodness. | Main | Cubs stuff, and the home opener is just around the corner. »

It was easy!
I got an email from Cubs.com saying tix would go on sale at 10.
At 10, I clicked on the link in the email.
Had to sign in with MLB.
Then... NO VIRTUAL WAITING ROOM!
I tried for the opener, but it was sold out.
Also, it appears only games thru April 7th were avail.
I clicked on the Brewers day game on Wednesday, and viola! 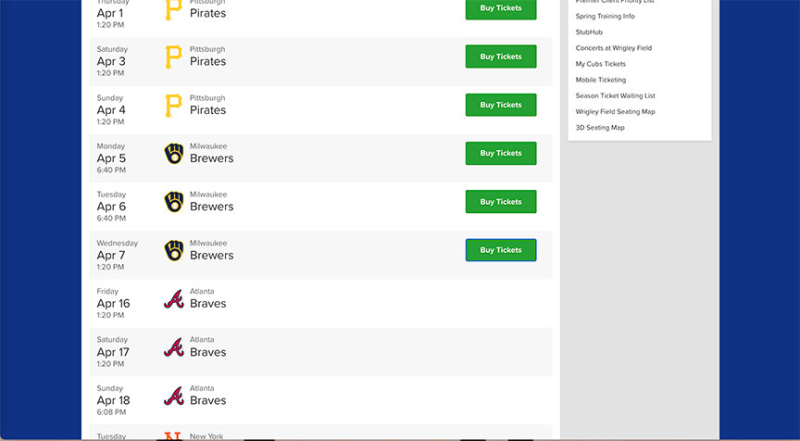 Got a Field Box Outfield ticket way down the right field line.
I thought they'd be... crazy-unusually expensive because they're only selling 20% capacity.
Not so... $36 bucks (no idea if that's the normal for this section), a little over $50 with all the charges.
The sun will be too far south for me to expect the beginnings of my annual Bronze God Status but come on... since it was me who got a ticket, it'll probably snow anyway.

So, if you're watching and they happen to show some shots of the crowd, I'll be the weeping guy in a parka.
It'll be the first.. kind of anything I'll do in over a year.
Go Cubs.

I just checked for available tickets (from brokers) for Monday's 3/29 Dbacks @ Cubs Spring training game at Sloan Park. The only seats available are halfway down the 1B line for $260 each.

This is nuts. I know there are limited numbers of fans allowed in right now. But $260.00 is World Series pricing! It's insane.

That's CRAZY! But more like what I thought it would be, Bud.
In the email I got from Tickets@Cubs.com, it says this: "To ensure appropriate physical distancing is maintained, attendees must not sell, transfer or otherwise provide any of their event tickets to anyone other than family (or other trusted acquaintances) with whom they have been sheltering, unless they are selling, transferring or otherwise providing all such tickets (i.e, the complete pod of tickets purchased) to a single party."
But surely there's got to be a gigantic market to sell tix at big profits.
I got a single ticket. It'll be interesting to see how the seating works.

If that's an accurate depiction of you dancing, you have to do a Tic Toc video!

Congrats on the tickets. That day is 14 days out, but the ten day forecast looks like partly cloudy sixties three days before the game. Of course, it could still snow on game day...

Earlier, I wrote some negative comments about what amounted to an exchange of Schwarber for Pederson. If spring training is any indication, I'll never be happier to have been so wrong!

I'd be happy with half of that.

Hi Rich. I filmed myself and then did the animation from that. Okay not really. Also, I made myself quite svelte! And also, my expecting snow is just my old trick of... if it DOESN'T snow then it'll be AWESOME, even if it's 12 degrees. The other cool thing is, barring something weird I believe my game will be Hendricks' second start!
Bud! Yeah it was so heartbreaking, but so hoping Joc makes the pain go away. Looks like he can. And honestly, I bet both players will be better this year because of this.