The role of Cubs' luck during Theo Epstein's tenure. 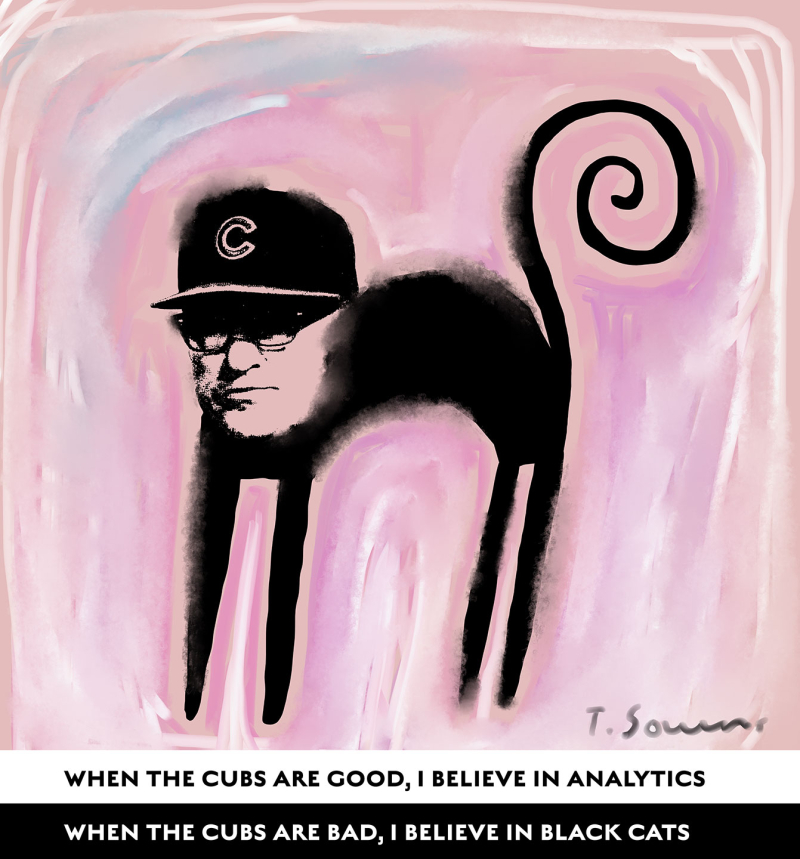 This has nothing to do with Theo Epstein leaving the Cubs, just a random thought about what happened in my head during his tenure.
As the Cubs got better and better, I began to stop believing in superstition.
Well, as much as I can, I suppose.
Dissolve back to 2003...

Bottom of the 7th, game 5 of the NLDS vs Atlanta.
Two outs, Julio Franco just hit a double off Kerry Wood and Vinny Castilla comes up.
He smacks a grounder to SS Alex Gonzalez and Gonzo muffs it, but the ball bounces right into Mark Grudzelaniek’s glove and he tosses to first, Castilla’s out.
Total, complete luck.
Without thinking I said, “OH MY GOD THE CUBS ARE GOING TO THE WORLD SERIES!”
Yeah, they still had to play the Marlins but come ON man, the Cubs just had that crazy mojo.
Still, people had heard me say “World Series”.
Out loud.
Jinx.
I knocked on wood, but 10 days later I’d be sitting with my brother at a silent Wrigley Field, watching the Marlins celebrate their NLCS victory.
It was my bad.

I can’t remember exactly which game, but Junior Lake was up.
Remember Junior?
Semi big-name youngster, but you know how that used to go with the Cubs.
Gary Scott.
Felix Pie.
Brett Jackson.
So Junior Lake comes up to bat and Pat Hughes said something typically Pat-like: “Junior Lake is due!”
That’s the go-to thing to say, right?
Hopeful, encouraging.
But in my head I thought, “No he’s not. He’s terrible.”
Surely somewhere on the side of Mt. Everest you’ll find the frozen body of a climber who had tried and tried to make the summit and on the day of his final climb said to himself, “I am DUE!”

Pre-Theo, I spent my baseball fan lifetime thinking about batters in terms of average and home runs and RBIs.
And Baseball Gods.
Then “Moneyball” happened.
And not exactly but it sort of coincided with Theo and Jed announcing The Cubs Way.
Theo's language was all different, all “assets” and “club control” and “ceilings” and… analytics.
Suddenly Our Team's management was smarter than Your Team's management.
And as the Cubs began their rise to the Ultimate Spotlight, I began to forget about goats and black cats and Leon Durham’s legs.
Even after Rajai Davis hit his game-tying home run from hell, I didn’t really fall back on… you know… like I used to think.
OH MY GOD THIS SHIRT/BEER/SEAT MUST BE BAD LUCK AND I MUST CHANGE IMMEDIATELY!
(In fact, the t-shirt I wore during Game 7 was one I made myself, the only one like it in the world, and it said simply, “F*ck the goat.”)
Winning it all put luck on the back burner.
But then the decline started...

Yeah… I regressed.
I won't ever go all the way back, but still.
A week and a half ago, with all that’s just so wrong in the world, I was actually worried about Friday the 13th.
Had Theo made his announcement then, I’d have lost my mind.

Now he's gone.
After we live through this “dumpster fire” of a Bears season, Spring Ball is just around the corner.
Jed Hoyer is at the controls.
There'll be a new gm, and you know it'll be quite a different looking team.
And come April 1st, Wrigley will be filled with actual fans for the home opener against the Pirates.

Theo Epstein, the guy who changed our world, is leaving the Cubs.

Theo Epstein is leaving.
Wow.
I mean, we all knew that was coming, but... damn.
Still feels kinda out of the blue, but I guess it makes sense.
Jed Hoyer, as expected, will step into Theo's role as President of Baseball Operations.
Wow.
Theo says he'll take the next year off, but you're already seeing how the Phillies are going after him.
With a completely straight face, I'd also say why not end up as Commish?
Well, that's getting a little ahead of it, I guess.
For now, I'm just gonna sit back and think back on all the good that happened under his watch.
My god, a World Championship!
The Greatest Game 7 of All Time.
A collection of players and coaches and managers we all got to absolutely adore.

Here's hoping he ends up doing whatever the hell he wants, and selfishly I hope that means somewhere still in the game of baseball.

Wow did you see that?
The Miami Marlins just hired a woman to run their baseball team.
From The Athletic's Lindsey Adler: "Ng becomes the first female general manager in MLB history and the second person of Asian descent to run a team (Farhan Zaidi, president of baseball operations for the San Francisco Giants is the other)."
She's crazily qualified with 30 years in the game, starting with the White Sox as an intern.
Google around and there's just so much good about her.
But also, this: the Commish has been out of his mind trying to figure out ways to make baseball more relevant to a younger crowd, and I'd argue that this hire by Derek Jeter may be WAY more effective than a DH in both leagues, shorter games, restricting shifts or whatever else is going on.
Ng is not a kid, that's not what I mean, I'm just saying that hiring a woman to such an important position will make people feel there's something actually progressive happening in this old man's sport.
I'm thrilled and wish her the best.

What else?
The Masters.
Did this painting for grins: 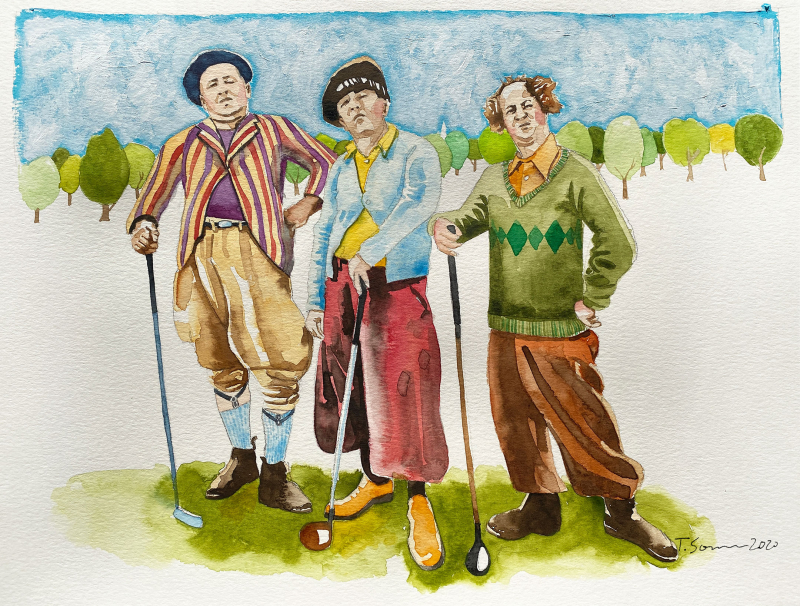 I'm not really a golf guy, but I am SO PULLING FOR CURLY!!!

And in non-sports related stuff that may make you smile, here you go: 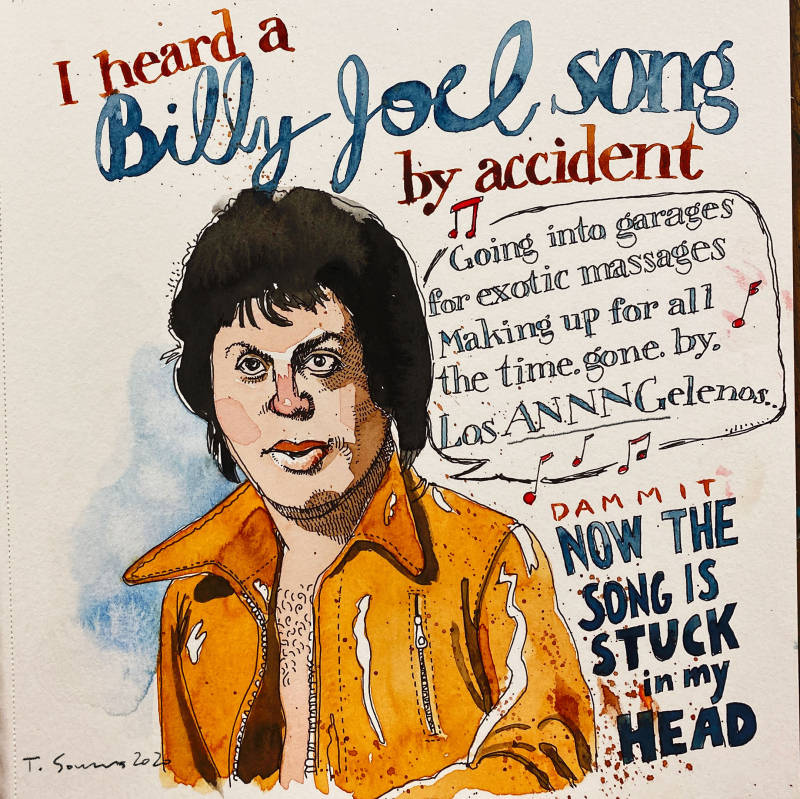 I had some playlist playing on Spotify and "Los Angelenos" came on and honestly, STUCK in my head even when it was on the pillow.
I mean... I like Billy Joel and in the '80s saw him in Flagstaff at a small venue, and that one's in my all-time top ten, but still... 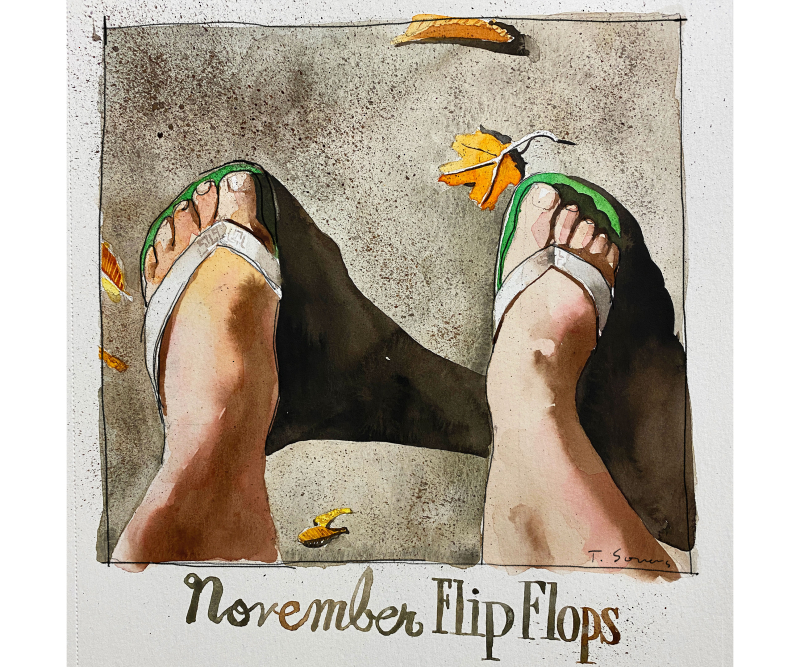 It probably just ended because it's in the 30s now, but wearing flip flops around Chicago in November is THE BEST! 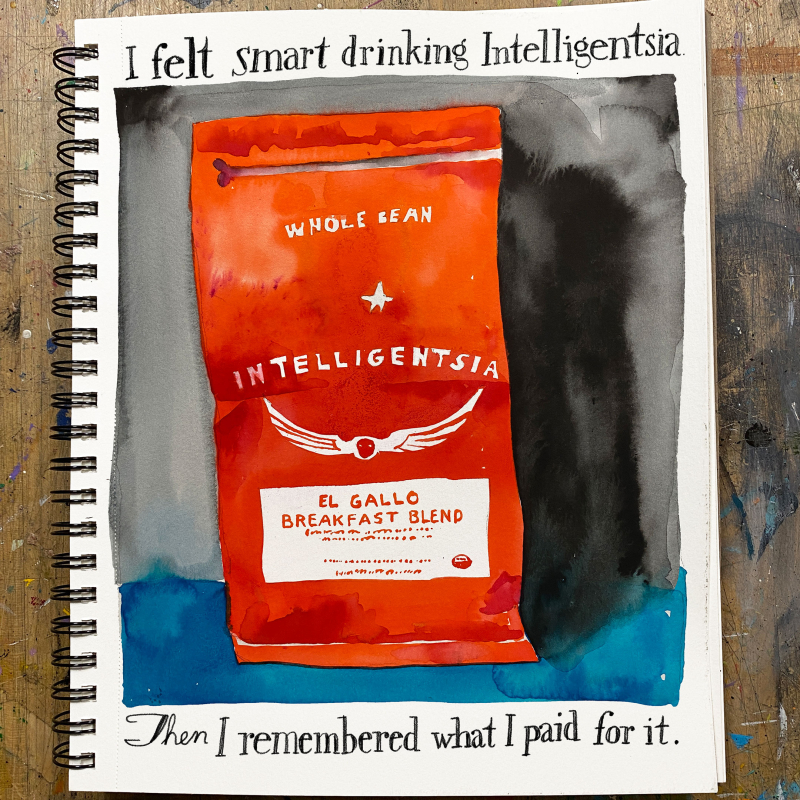 Lastly, Intelligentsia.
Some people swear by it, and it really does taste amazing.
I was in Jewel the other day and was surprised it was in the coffee aisle and just bought it.
It's now almost gone and... there's my lesson.

What could be more fun than watching the Bears?

That's all for now!