Poof. There went the Cubs season. 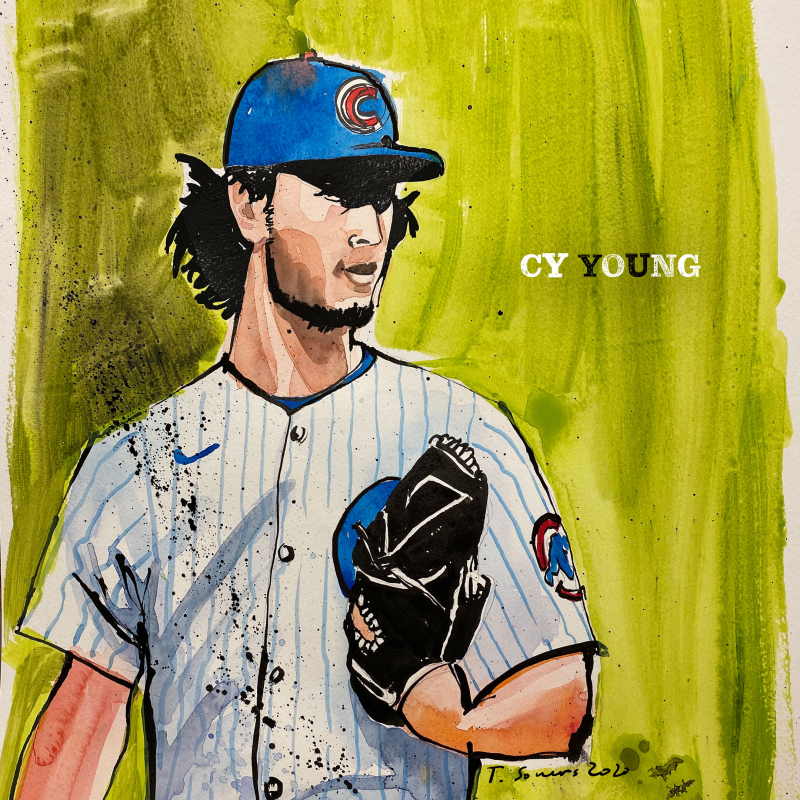 I did this painting just before what turned out to be the last game of the season.
I did not put it up here because I was afraid of doing my usual jinx.
But apparently, I jinxed it all just by doing the painting.
And now... surely Yu Darvish won't get the Cy Young.
Or maybe because I just said he won't, he will!
Either way, Darvish was simply great.

Well, what do you think?

Here's a Sports Illustrated Verducci article that says basically the Cub Core is made up of bats that were designed for the game 5 years ago.
That the game has changed in that time.
Pretty depressing, but given what transpired at the plate for the Cubs during their post season visits, it's got merit.
From Verducci: "In 14 October games since winning the World Series, including the 2018 tiebreaker game, the Cubs batted .158 and were outscored 60-28. They scored two runs per game in crunch time. Their offense simply does not work in the pitching-rich postseason environment of today’s game."
Ouch.

But when I think about what Theo Epstein tried to do here - create a team of mostly home-grown kids, keep them together and let us watch them grow - I still think that was just so awesome.
We've gotten to know them really well, rooted for them through thick and thin, and now... well with Core free agency coming up at the end of next season and the weird-ass shape of the world both inside and outside baseball, I have no idea what will happen next.
But I'll tell you what.
I am so thankful that this Cubs season even got a chance to happen.
Everything's upside down, and the couple hours per day I got to spend watching or listening to my favorite team play my favorite game...
I make judgements on what I see around the world as either "helpful" or "not helpful", and there's just so much out there that isn't... watching the Cubs was one super-helpful thing all the way around.
Great examples of just being a human being both on and off the field.

So, everybody reading this please have a fabulous rest of the season and off season.
I'm sure I won't be posting as often as I have, but I'll still be here.
Go Cubs.

Your take on this season is the same as mine, and I suspect most of the Cubs fan base. We all needed this "season" as an escape from all the other negativity in the world today. I would have loved for our team to advance deeper into the playoffs. But I can't tell you how grateful I am to have been able to watch or listen to those 62 games that somehow transported me back to a simpler, less angst-ridden time.

As for the future of the team, I'm not sure I buy into the recently proposed criticism that our bats can't handle today's pitching velocity. Just because some 22 year-old phenoms (see Tatis,Jr., Soto, Robert, et al) have faced more 99 mph pitching does not mean that gifted athletes like Rizzo, Bryant, Baez, et al can't adapt to different pitch selection and strategy. Besides, if you want to be overly-ready to jump a 97 mph 2-seamer, I know some guys like Hendricks and Darvish and Kershaw who can still tie you up in knots.

Do we need different ballplayers? Maybe. Do we need a different offensive strategy? Probably. Will I be back next year to watch my Cubbies? God willing - yes!

Hey Bud,
Well this thing still isn't right - I can't reply to your comment, but at least I can put one up after yours.
Anyway, yeah.
I'm sure there will be a number of changes, and the pandemic's economic attack will be a big part of that as well.
If nothing else, it'll be veeery interesting.
Go Cubs!