« Jon Lester fooled me. | Main | Alec Mills and his incredible NO NO! »

Cubs 4 Brewers 2. Jason Heyward. There is NO WAY that just happened. 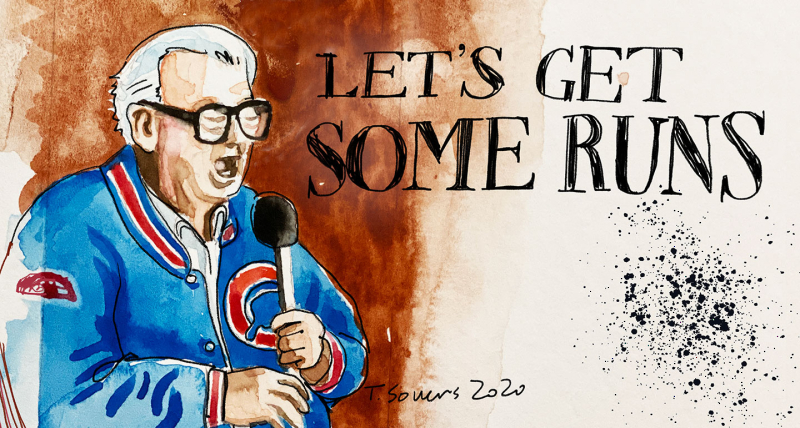 First off, I painted this yesterday afternoon.
While it was created with simple watercolors, it's obviously magic.
Perhaps the combination of vintage Cubs hat, khaki cargo shorts, my holy (NOT cow, but rather holy with holes) "Cub Fan Bud Man" t-shirt, green martian socks and striped orange and black Sanuks Sidewalk Surfers I wore as I painted that created some sort of alchemy.
Accidental sorcery or wizardry or something.
Because there was no way the Cubs were gonna overcome a 0-2 deficit in the top of the 9th with evil golden haired Josh Hader on the mound.
Be honest - if you hadn't turned it off already, you were totally thinking about it, right?
It starts with Schwarber fouling while attempting to bunt a 95 MPH 4 seamer with 2 strikes.
Son of a B!TCH!
2 outs to go.
I swear right at this moment my cousin texted me a video he'd put together for his wife's birthday, the kind where he got all her friends to send video of them saying "HAPPY BIRTHDAY" or whatever, and he edited them together.
I was half looking at that and half watching an obvious loss.
Javier Baez is up.
Gee I wonder if he'll strike out.
So instead I'm watching my phone with my cousin's wife's aunt singing happy birthday - omg it's the entire song.
Len and JD say there's a hit and I watch the ball go into right field so okay now Javy's on first and Rizzo's gonna pinch hit.
I know he's homered off Bader before, so I put the phone down.
He goes down 0-2, then Hader throws one that's probably a strike but so down and out that nobody can hit it.
Except Rizzo.
Single to right.
Now I'm sitting up and leaning forward with elbows on my knees.
Jason Heyward has been a serious bright spot this weird season, but now it's 1-2 and it's freaking Hader so OH MY GOD HE HIT IT.
HE HIT IT AND IT'S FLYING WAAAY UP INTO SPACE.
IT GOES UP INTO SPACE AND MUCH HIGHER THAN THAT LIAR RYAN BRAUN'S EARLIER HOMER AND THE CUBS HAVE A 3-2 LEAD AND I'M SCREAMING THERE IS NO WAY JASON HEYWARD JUST DID THAT NO WAY IT'S IMPOSSIBLE BUT IN THOSE COUPLE SECONDS I SWEAR I HEARD HADER YELL THE EFF WORD SO IT HAPPENED IT HAPPENED IT HAPPENED.
Then Ildemaro Vargas hit ANOTHER homer.
I SCREAMED OH MY GOD THERE IS NO WAY VARGAS JUST DID THAT!
Then I said, "Wait - Vargas? Who the hell is Vargas?"
Oh he's the new backup infielder the Cubs got back on the 5th because the Twins DFA'd him.

Craig Kimbel pitched the bottom of the 9th and sure enough there were immediately Brewers on 1st and 2nd with nobody out.
He K'd ex-Cub Dan Vogelbach.
Then Ben Gamel hit a weaky to Vargas at third, and like a safety Vargas went after the guy running to third and tagged him out.
Really cool play.
Then Avisail Garcia lined out, it was all over and the Cubs had won their sweetest and biggest game of the year.

I'd completely forgotten about Kyle Hendricks and his absolute crafty dominance - he went 7.2 innings and only gave up the 2 run dinger to that liar Ryan Braun.
Could not have won without The Professor.
And not without the Magic Harry Caray "LET'S GET SOME RUNS" painting.

Cubs have Alec Mills vs Crew's Adrian Houser at 1:10, probably sometime late in the 2nd quarter of the Bears at Lions game.
Bear down.
Go Cubs!