Baseball's happening? And 36 years ago today, the Sandberg Game.

Well first off, baseball may actually happen after all.
Players to report to Spring Training on July 1st. 60 games. DH. Extra innings begin with runner on 2nd. Money blah blah contracts blah blah blah blah.
There have already been numerous cases of covid-19 with players and baseball supporting staff.
Oh, I'm excited for sure, but I can't imagine this happening without some major hiccups.
Something or things will happen that no one has thought about yet.
And the thing we all dread most, well I don't need to even write that.

We'll have plenty of time to reflect on the massive amount of douchebaggery and damage to the game this teeny bit of owners vs. players negotiating spawned.
I mean, even BEFORE Cardinal owner Bill DeWitt said that baseball wasn't very profitable, we'd already been treated to Astros owner Bill Crane saying their World Series cheating "Didn't impact the game. I never said it didn't impact the game."
So, not talking about that yet.
I'm just remembering that Kris Bryant didn't get traded, and had baseball NOT happened (and it still might not, thank you virus), then possibly the last time we'd have seen him in a Cubs uniform...he was being helped off the field after slipping on first base.
That ain't no way for that guy to go out.
IF it turns out he's no longer a Cub after this season. 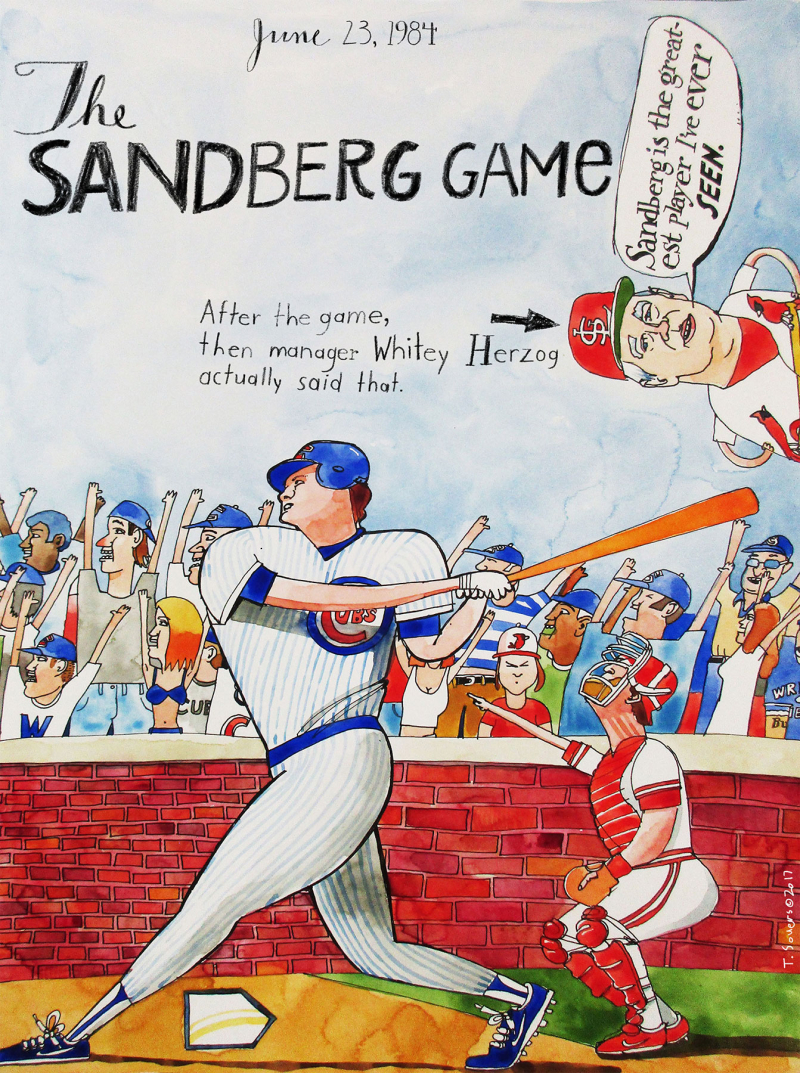 If you recall, I was there by accident (a friend from Belleville came up to Chicago with Cardinal fans and extra tickets).
The game sucked early as Steve Trout gave up 7 runs in the first 4 outs.
But then it.. got better.
Today ESPN put up a 45 minute video titled "The Sandberg Game".
I'm waiting to watch until it's an appropriate time to crack a cold one. 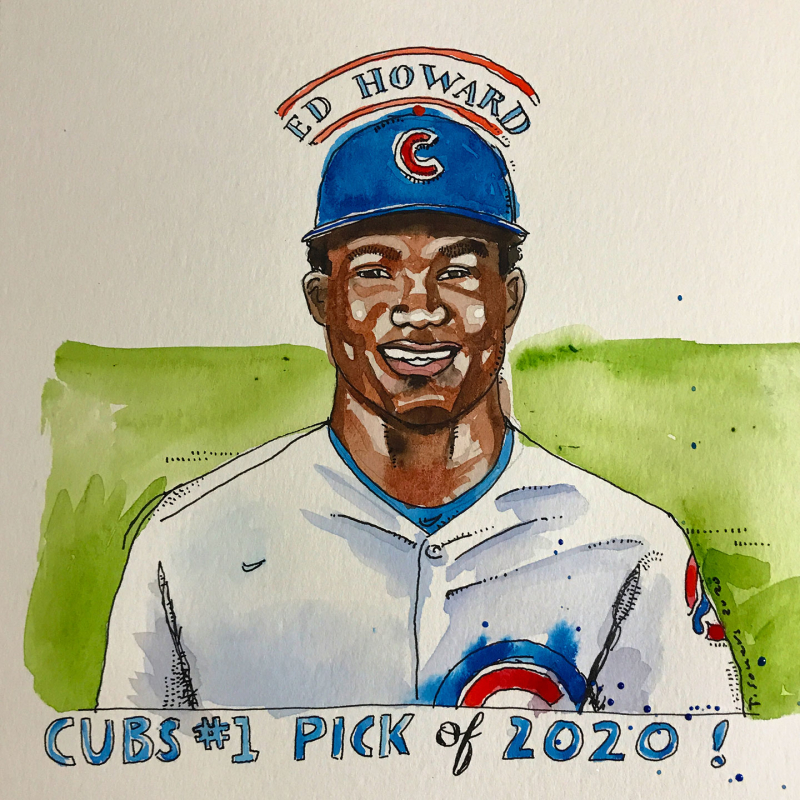 How come I feel so good about this Ed Howard kid?
The Cubs #1 pick of 2020 is a local highschool kid from Mount Carmel, that's why.
I always wished former local stud OF Curtis Granderson woulda somehow ended up playing at Wrigley.
Because he was local AND good.
And Howard checks the good box too - he was widely regarded as the best shortstop in the draft.
Crazy for a hs kid.
So very cool there, Mr. Epstein and Mr. Hoyer.

As far as the rest of baseball?
Bite me.
The owners... it's like they're pretending no one can read.
The silly sliding pay scale based on how many games but stays the same proportion no matter how many.
So much damage to the game over relatively nothing.
The Commish guarantees baseball this year.
We'll see.

I was so angry.
That asshole walked out on the team! 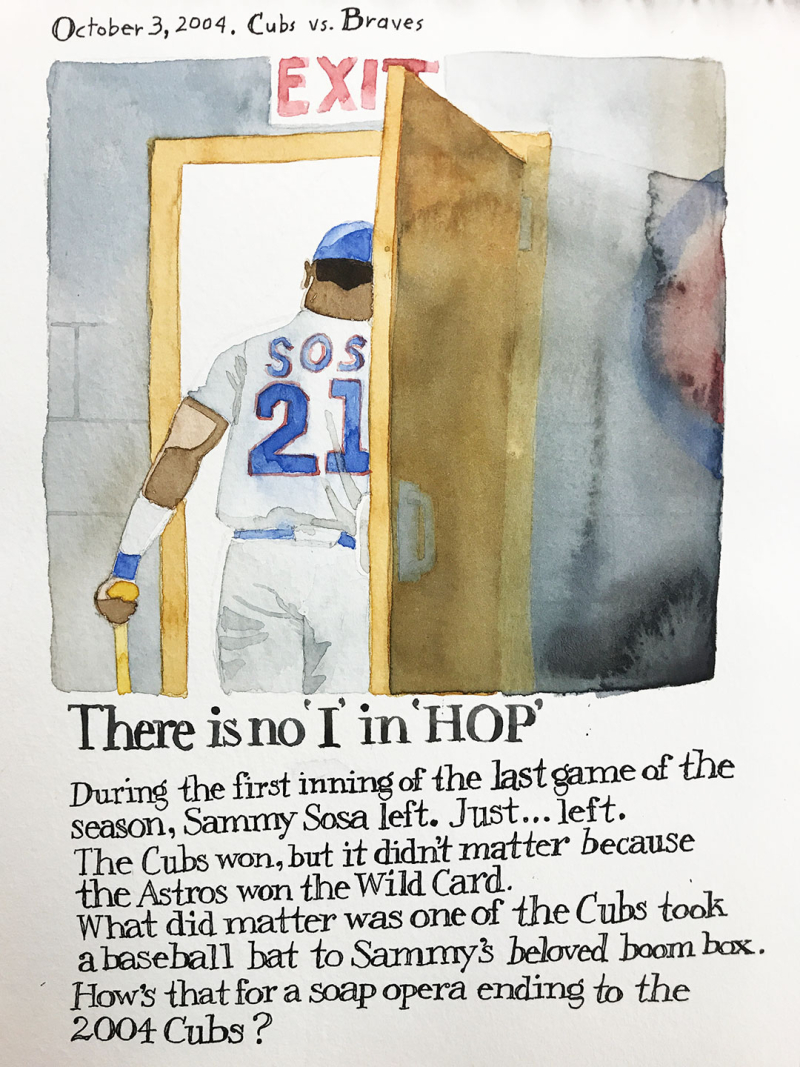 It's widely believed that the player who destroyed Sammy's boombox was Kerry Wood.
And the ending to this season just pushed the way we all had begun thinking about him to the edge.
He'd become a diva.
Bigger than the team, and everyone was in on that from management to you and I.
Hey Sammy? You're late for Spring Training again? That's okay bud, just keep hitting homers.
But at the end, all that prima donna stuff had worn out it's welcome.
Plus, he just wasn't Sammy any more - the performance fell off.
After walking out in '04?
Good riddance, man.

And then the whole steroid thing.

Here are random pages from my sketchbooks in '03 and '04. 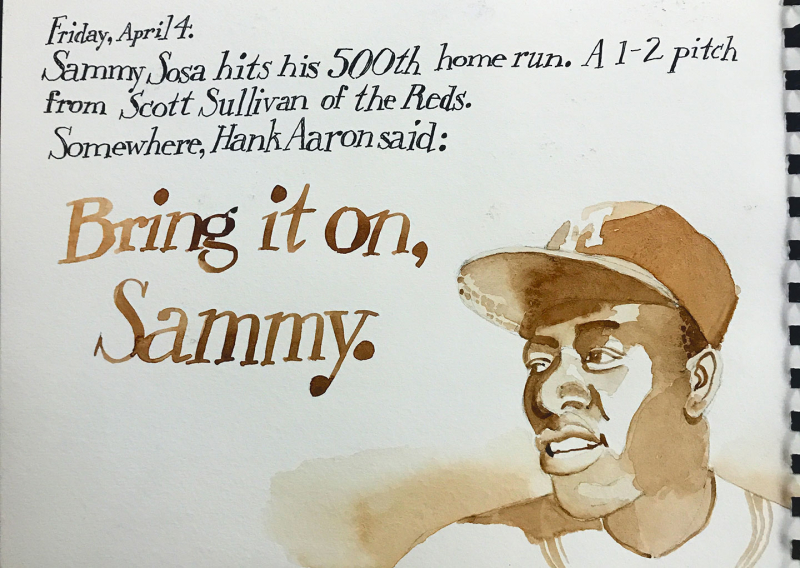 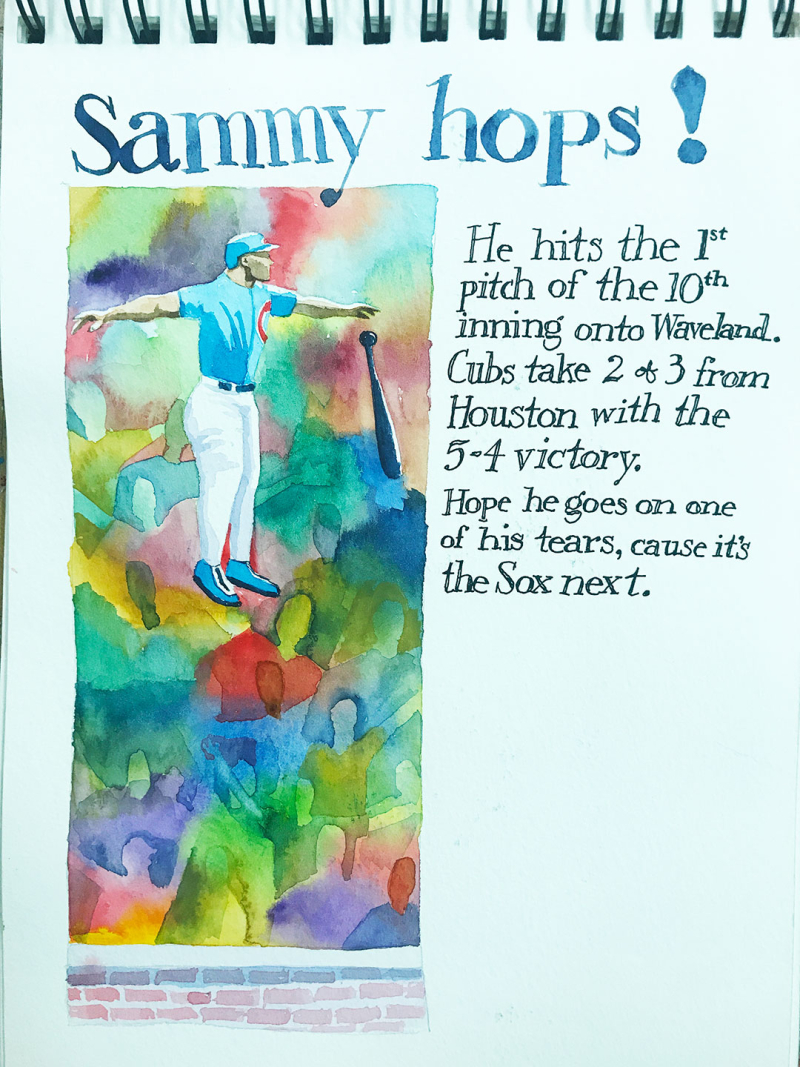 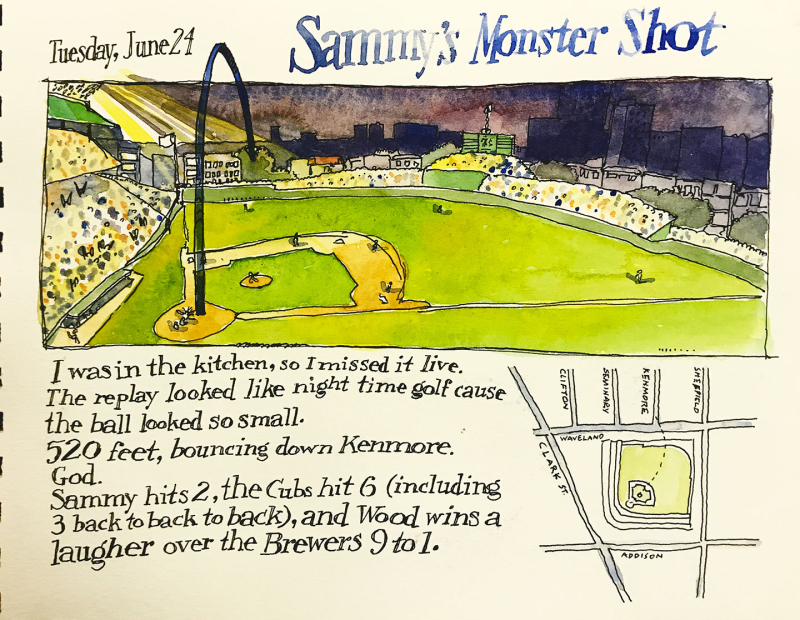 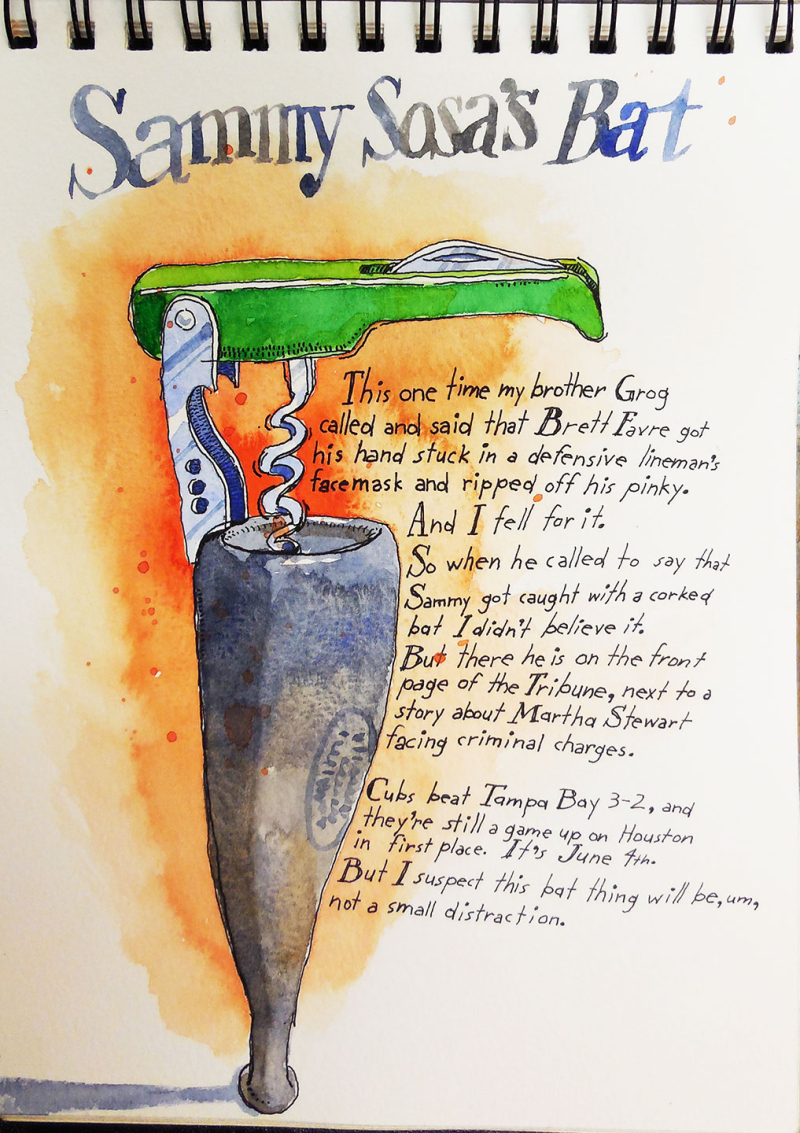 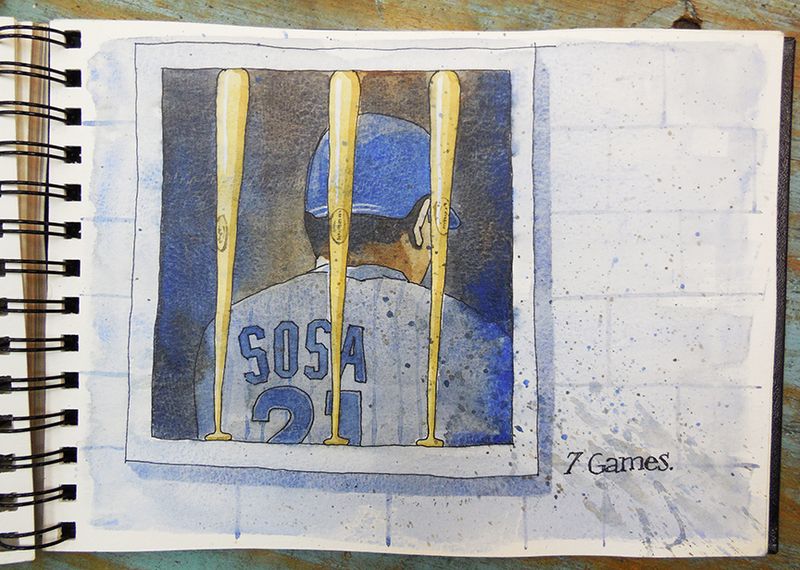 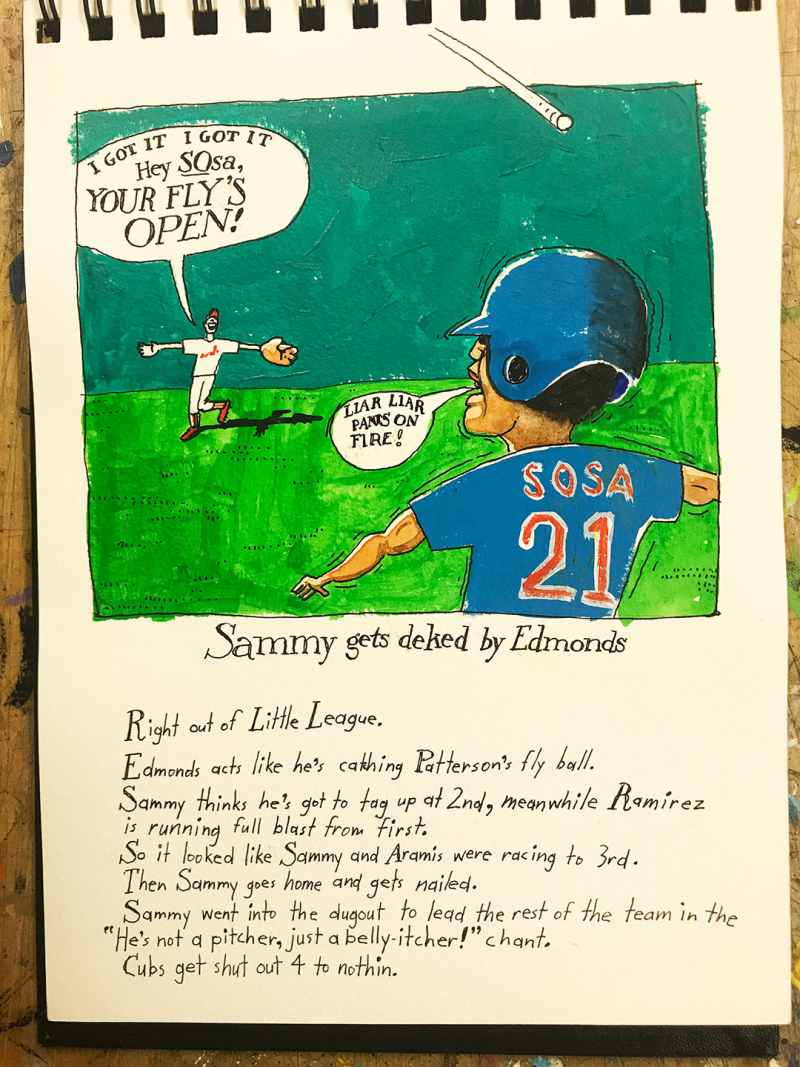 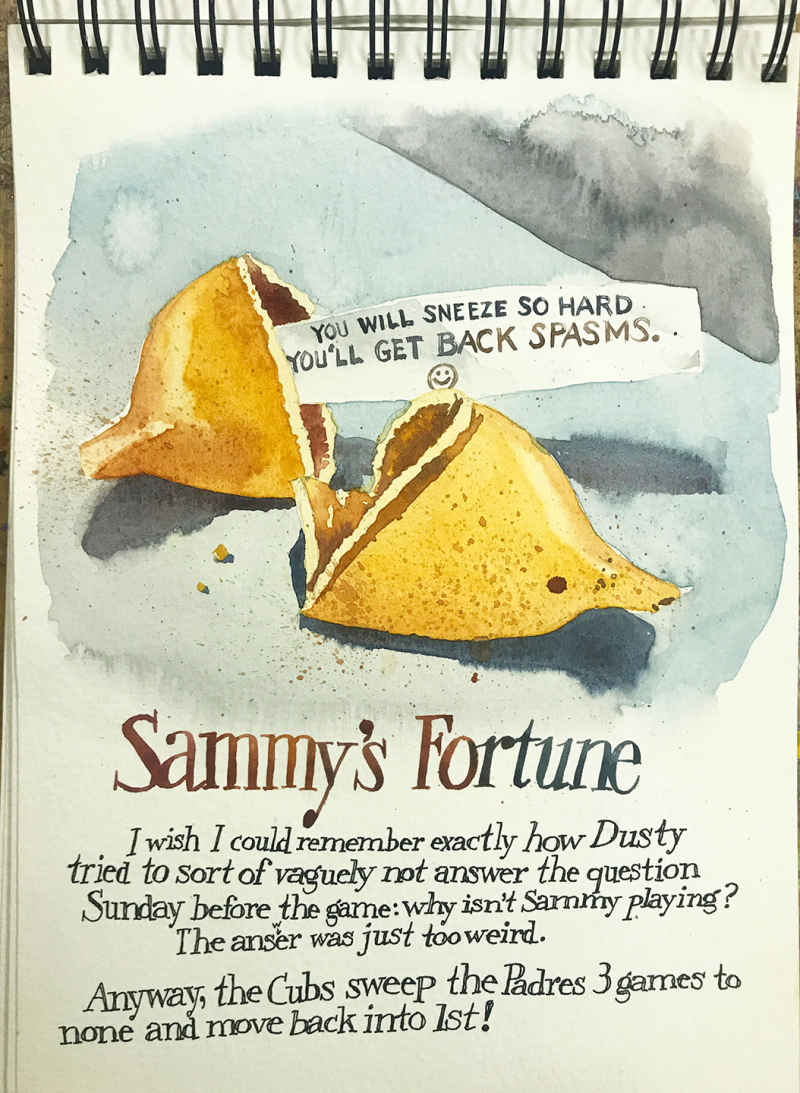 Well, I've decided to give up the anger.
He didn't gamble. He didn't throw games.
It's been long enough, and lately I've been thinking about the joy he brought and honestly, now I think that outweighs his ending in Chicago.
Plus, I don't want to be a bitter old codger.
On June 14th, I'm going to watch this ESPN "30 for 30" episode on the '98 season, "The Long Gone Summer".
It's about the big Sosa/McGwire home run tango.

Surely there'll be more than just that because the whole deal didn't end well, but oh well.
That's baseball.