Use Zoom to allow fans to participate in baseball games. 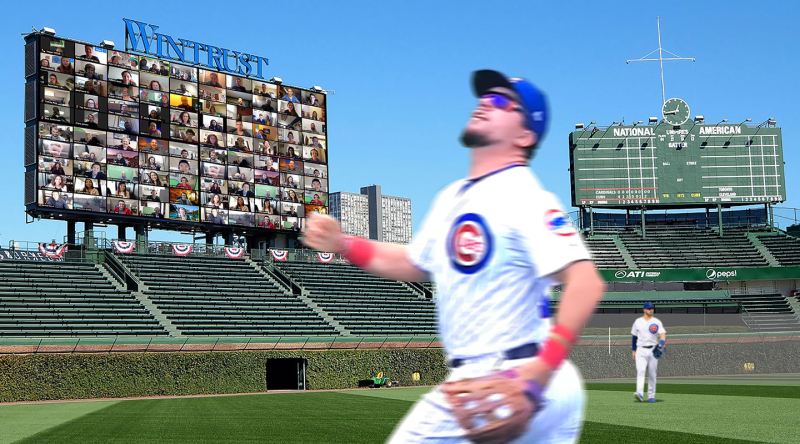 I put this on Twitter yesterday (here) and it’s still getting retweeted.
Even Gordon Wittenmyer liked it.

IF baseball happens…
Take that massive video scoreboard at Wrigley (and every ballpark) and turn it into a massive Zoom (or whatever app) meeting of baseball fans.
And live-broadcast their cheers in the ballpark.
Yes of course there would be a concern about people showing private parts or yelling something non-pc.
But those are details that, should MLB actually do something like this, they could figure out.
(Like, off the top of my head it... if enough people participated then the individual pictures should be small enough to not notice a penis, and the sound ought to be one big ballpark noise rather than individual voices.)

No it’s not like being at the ballpark, but if I could watch the game in my house and cheer on the Cubs, knowing that my voice would be pumped in to Wrigley Field along with hundreds or thousands more?
I’d go hoarse in my living room.

I mean the whole point is to get fans in the ballpark, which would be great.

But first, baseball would have to happen, which brings me to this part: Someone is 99.99% certain baseball will happen this summer?
Hey it was right there on the news, so it MUST BE TRUE!
Right?
Well, I don't know.
I couldn’t pay attention to the actual story because they were showing old footage of young Eloy Jiménez smacking a homer off Pedro Strop, which made me two kinds of sad. (One: Jiménez not being a Cub and Two: Strop not being a Cub.)

I saw the article about baseball in Taiwan being played in front of cardboard cutouts for the "crowd".
And... ahahh! Here's the Baseball-Might-Happen story from USA Today.
Start in June, re-structure the league based on geography so teams restrict travel.
The Cubs would still be in the Central along with teams that are nearby.
So still lots of Cards, Reds and Brewers, White Sox and... Indians.
Along with Twins, Royals, Tigers, Braves.
In empty ballparks with the remote possibility of allowing fans in ballparks at the end of the season/playoffs.

But the most important part is: "...pending approval of medical experts and providing that COVID-19 testing is available to the public..."
The testing thing is... well, you know.

Lastly, I recommend you try this at home: 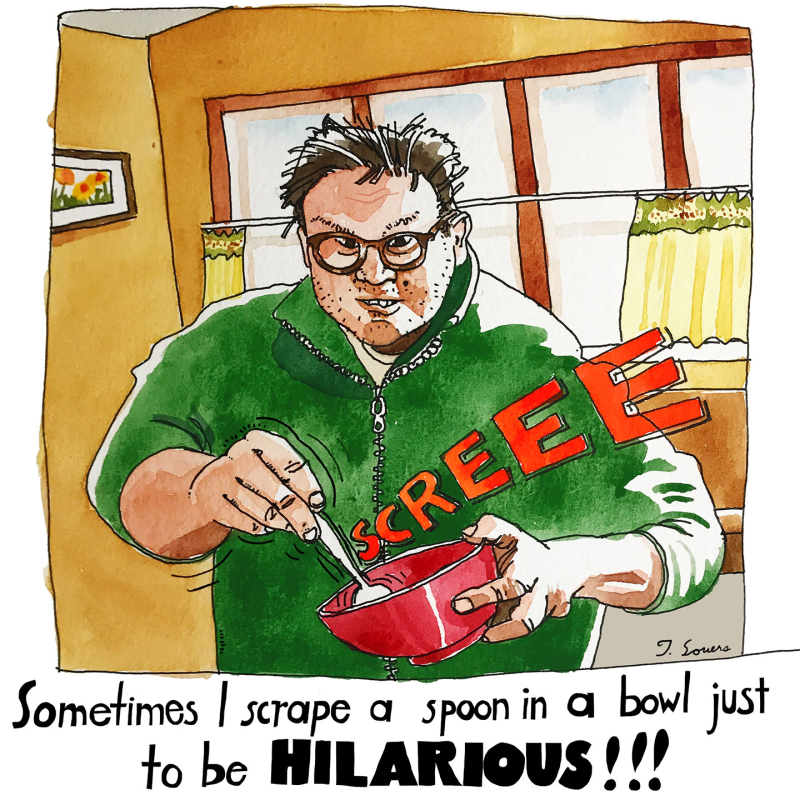 Okay just kidding.
Unless you want whoever you're quarantining with to brain you with a pan or something.

A little Cubs and lots of Quarantine drawings

Hi.
I got a note that said hey man, you should put something up (thanks, Bud).
I've divided up time into "BC" and "AC" - "Before Corona" and "After Corona" (although it could be "Covid" as well).
Honestly, it's almost hard to think back to how it felt to be a Cub Fan BC.
I know I was excited as always. I was happy Kris Bryant didn't get traded.
I wanted to see The Core try one last time to be all they could be!
But also know that the bullpen was totally suspect and the starters were like 2 excellent (Darvish, Hendricks), one had to prove he could start (Chatwood), 1 future HOFer total GOD CUB of all time but who was getting dicey (Lester), and one yeah/meh (Quintana).
The Cubs AC... I just do not expect to see any baseball played this year.
It would be great if it happens, but I think they punt.

So here's more stuff I've been doing in my "Corona Sketchbook" and putting on FB and Instagram.
You know how when you turn on Netflix and it's a streaming service so it takes a minute to fully come on, and first the logo comes up and then at some random time after... the DUN DUNNNN sound of their audio logo.
It scares the crap out of the cat. 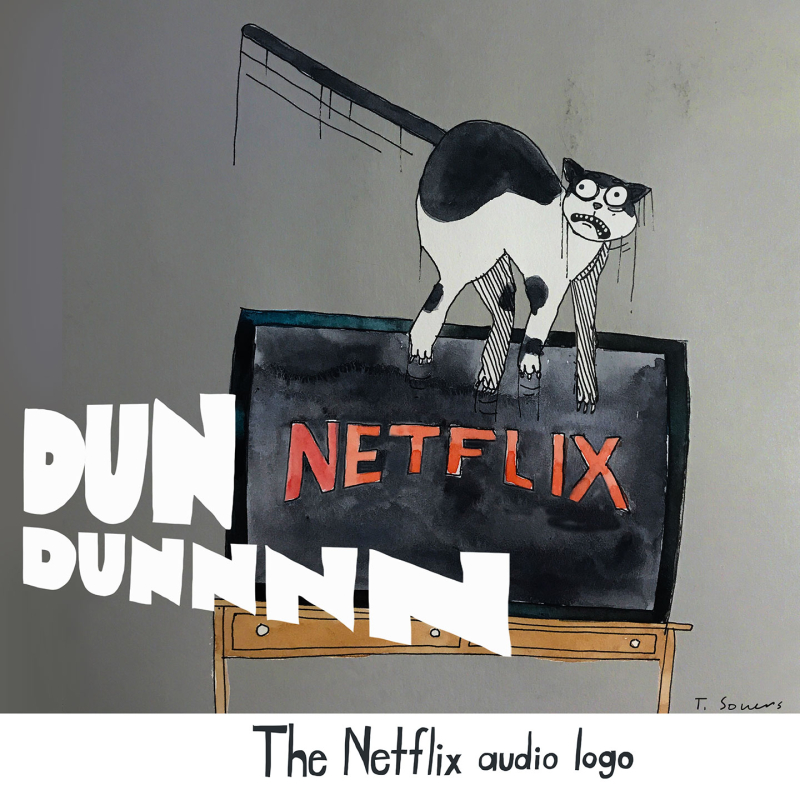 Here are new drink names based on our current quarantine status:

(I'm trying to create a Zazzle store to sell cards, coasters, posters, etc based on "Quarantine Drinks", and if I do and it works I'll donate any profits to some of the local orgs that are helping feed people who need it)

I gave all our knives nicknames based on... watching too much tv.

And my wife gave me a haircut with these clippers that I ordered online (they took 3 weeks to get here because demand is high). Anyway, I LOVE the haircut. 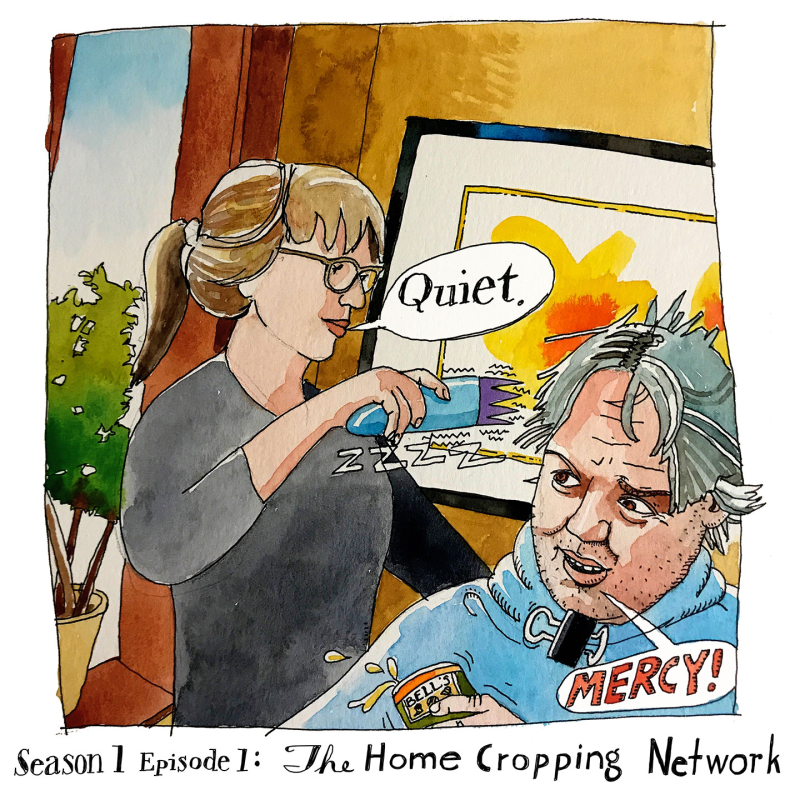 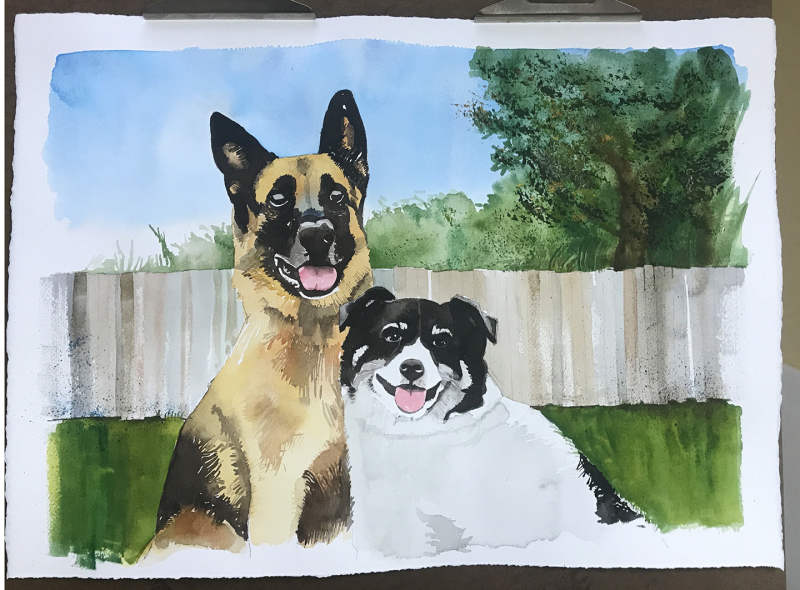 And.. I should have done a post with this painting back when it was Jackie Robinson Day... 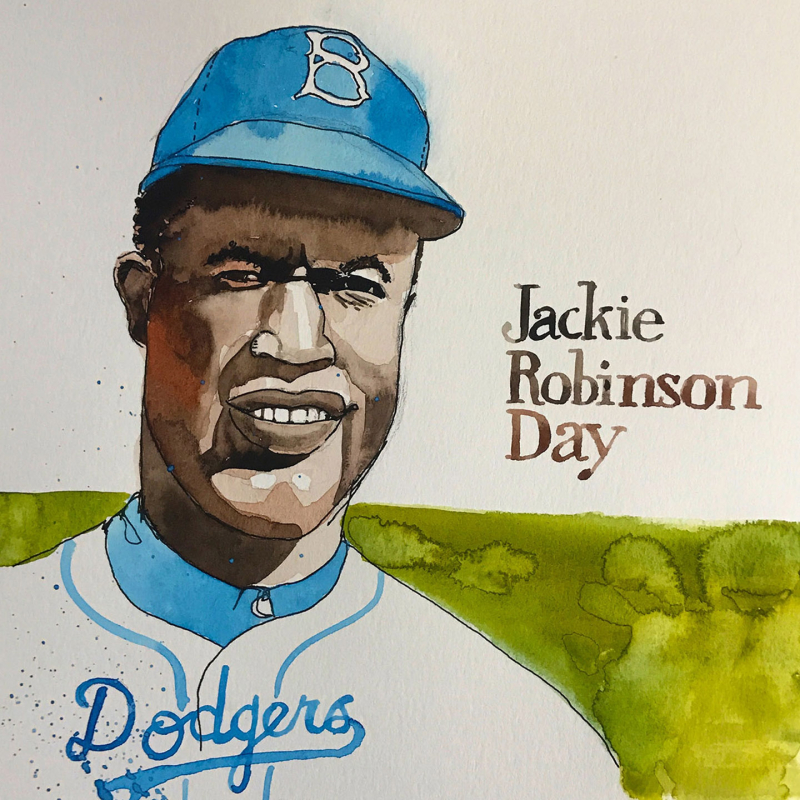 That's all I have.
I'm not quitting, I've just been... other stuff has been more important.
But I'll keep trying to put stuff up.
Thanks for visiting and stay well!
Go Cubs.

How long will baseball be that... spinning wheel?

You know, when people are getting sick and some dying, it's just greedy and insensitive to complain about missing entertainment.
On the other hand, baseball's role has sometimes been more than just entertainment.
During wartime... after 9.11... sometimes the country actually needs it to begin healing.
But this time, baseball's stuck.
That's all there is to it.
Maybe they figure out how to make it happen in Arizona.
Maybe it's 7 inning games - I don't really care about whatever wacky modifications they make, but the bottom line is safety.
Until then, here's more quarantine stuff... 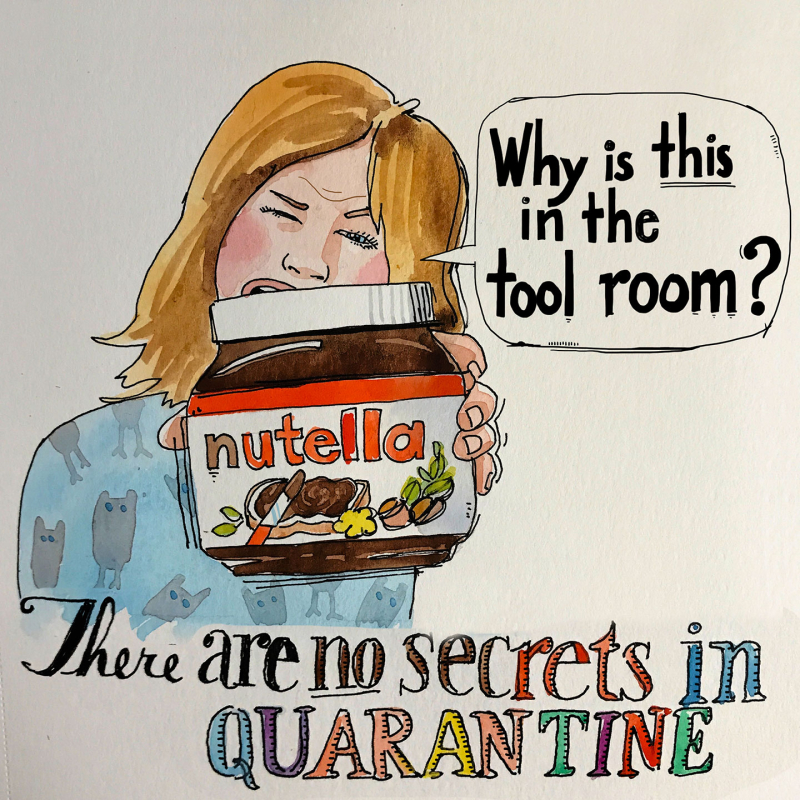 We had a zoom chat with my son and his girlfriend for his birthday, and they broke out an improvised talking pineapple to brighten... everything. 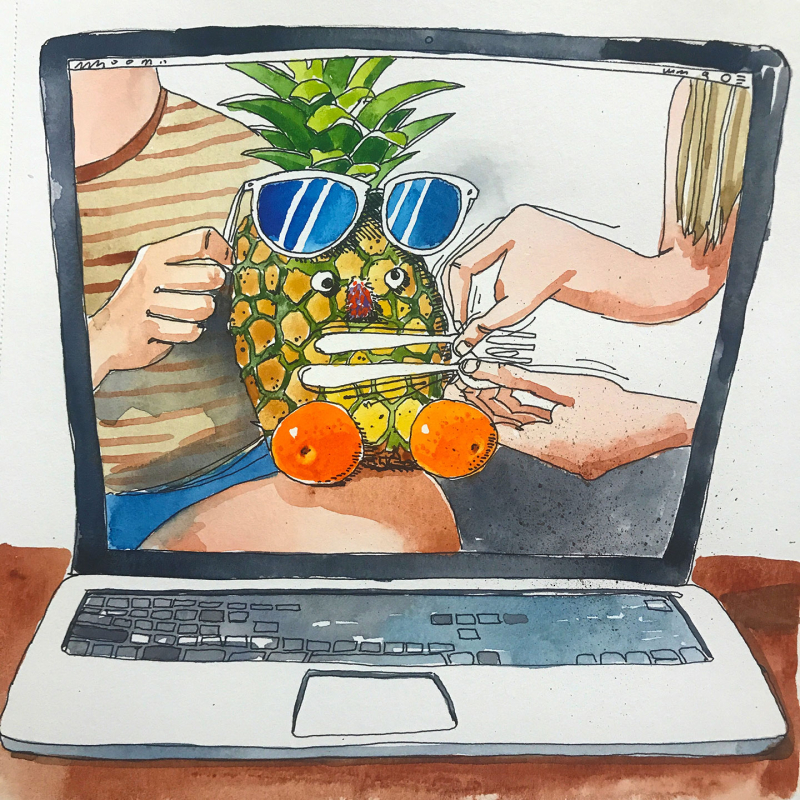 And finally, so many robins are out! 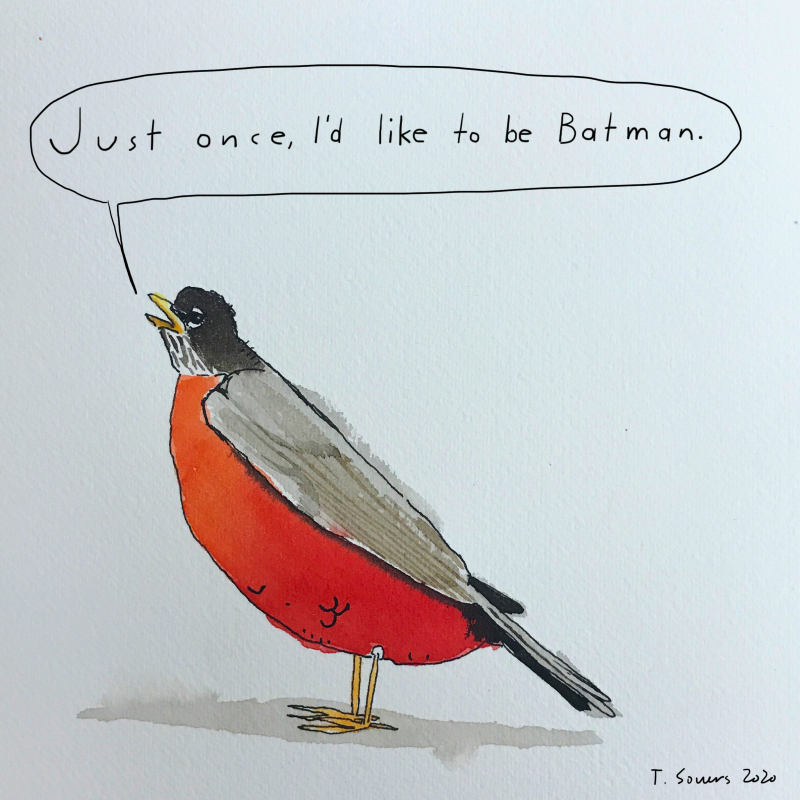