« The 7th inning stretch, brought to you by Thanksgiving. | Main | Addison Russell will play elsewhere next season. »

Cubs about to hire another ex-catcher as a coach, Craig Driver. 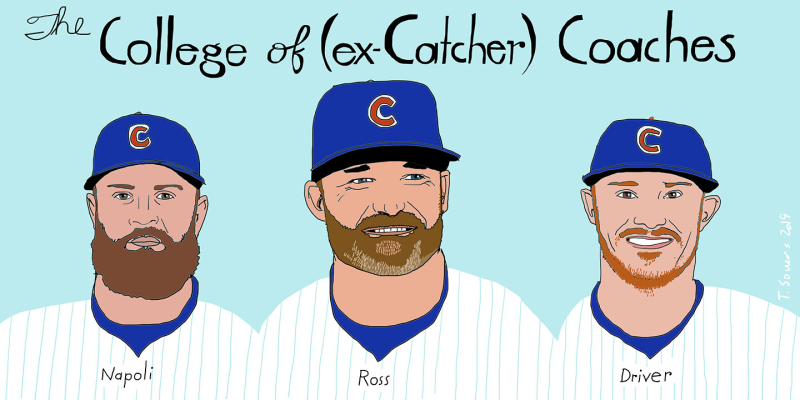 Well, they say catchers are the quarterbacks, the guys calling all the plays, the guys watching the whole field... the guys who end up being great managers.
And coaches.
The Cubs are going to hire Craig Driver as their first base coach, which apparently leaves Will Venable either without a job, or maybe moving over to 3rd base coach. (Theo said the Cubs were retaining him, so it's probably #2.)
Driver was a college catcher - three seasons at the University of Puget Sound after spending one season at Columbia Basin College.
And while at Philly, well... this from That Ball's Outta Here: "Driver thrived over the past two seasons with the Phillies, his first professional coaching position. As bullpen catcher/receiving coach, Driver worked regularly with the Phillies’ lone All-Star, and eventual Silver Slugger and Gold Glove Award-winner J.T. Realmuto.
Realmuto’s offensive and defensive awards are indicative of the stellar season he had in 2019, his first in red pinstripes. In part thanks to Driver, Realmuto was able to post the ninth-best defensive WAR in the National League (1.7). Among NL catchers, he turned the most double plays (14), had the most caught stealings (43) and highest caught stealing percentage (46.7), among other feats."

So... whether the Cubs keep Willson Contreras or the catching duty goes to someone else, whoever that is will have coaching, very good coaching, up the wazoo.

The ex-catchers coaching are not only Ross, Mike Napoli and now Driver, but also Mike Borzello and Chad Noble.
It's fabulous that the guys wearing the tools of ignorance turn out to be the smart ones.
As opposed to not smart... the original College of Coaches - the early '60s failed Cubs experiment of using 8 (or 9, depending on where you read) different dudes to manage (or "head coach") the team.

Hope you had a fab Thanksgiving.
I pulled a turkey off the grill and man, it was almost completely black - I think it was the fault of the butter some recipe told me to coat the bird with.
But inside, it was absolutely perfect.
Here's the pretty much perfect turkey instructions... brine or rub your bird, keep the fire between 300 and 350, use indirect heat (don't put the bird directly over the coals), put it on the grill breast side up, it's about 15 minutes per pound, and pull it off when the temp in the breast reaches 165 degrees.