The 7th inning stretch, brought to you by Thanksgiving.

Some hardcore baseball FUTURE FACTS for the Cubs.

Just kidding.
It's that time of year when people spout off ridiculous rumors.
Here's my favorite one on acid: Kris Bryant and Jason Heyward to the Phils for Jay Bruce and Jean Segura from Joel Sherman at MLB Network.
Are you mad?
One thing, I'm pretty sure the Cubs won't re-sign Nicholas Castellanos, despite this awesome painting I did of him: 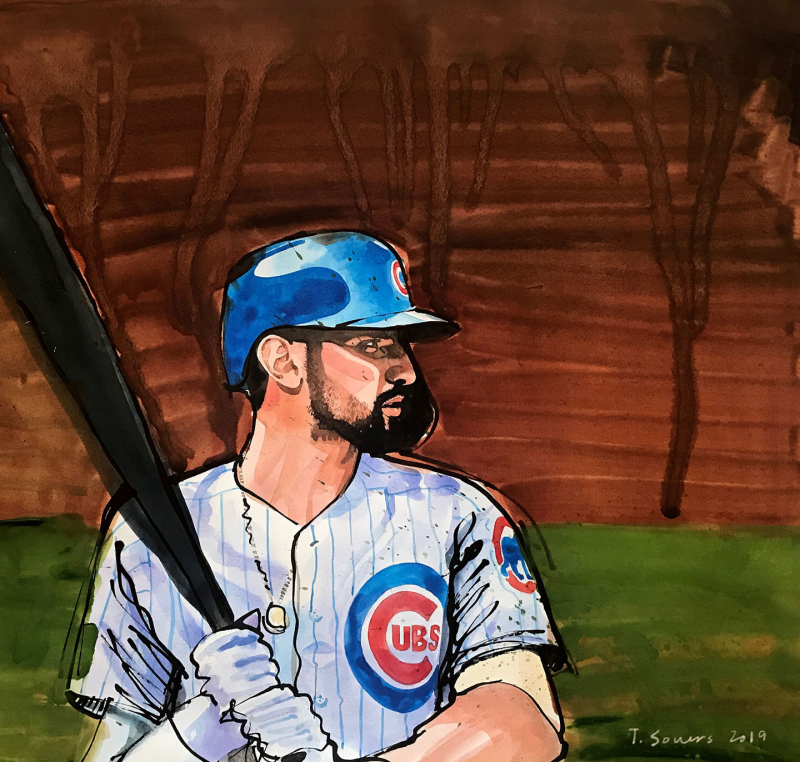 I mean, you never know, but Jason Heyward's not going anywhere with that contract and would best be put back in right field as a Gold-Glover, left fielder Kyle Schwarber may have turned the corner to super scary awesome in the 2nd half of '19, and Castellanos can't play center and ought to be signing a big, lengthy contract with Mr. Boras at the controls.
Yesterday the White Sox signed a new catcher, free agent Yasmani Grandal, to a 4-year contract worth $73 mil.
The Sox are ecstatic, it's their biggest contract of all time - we were too when the Cubs signed Alfonso Soriano.
Now the Brewers are going to have to fill that hole at catcher, and the Sox aren't done.
For us in the meantime, we get to read... now that Grandal is off the menu and just timing, Willson Contreras' trade value skyrocketed.

I'm not saying this is absolutely going to happen, but the White Sox are obviously a team on the rise while the Cubs are kind of... not exactly limbo but we all know change is coming.
So at least you and I are in limbo as we wait for whatever's going to happen, while the Sox...
Next summer, the '20 Sox might be the '15 Cubs.
I vividly remember going to the Gale Street Inn for ribs one night when the Cubs were sucking and the Sox were doing well, I walked to the bar while waiting for a table and the Cubs were on the tv there.
I was the only one paying attention.
Suddenly a group of Sox fans came in and said, "Hey change it to the Sox. NOBODY wants to watch the Cubs, man!"
And the channel changed.
Those guys were right - people turned to watch the Sox.
Not saying the Cubs won't be awesome, but I'm preparing myself to at least share the tvs in the bars around my hood.

Lastly and completely unrelated, next year is going to be 2020. Twentytwenty. Two oh two oh. I imagine we'll see tons of things based on just the words...

I get when a pitcher is tipping pitches.
I get when someone in one dugout sees something that allows his team to get a leg up on the other.
But using cameras and screens and any kind of technology to cheat?
OMG AM I THAT NAIVE?
I had no idea it could get that bad, and while it's convenient for me that the Astros are the poster child for this (because I can't stand them), it's apparently a much bigger problem than just Houston.
This is all just beginning, and if you subscribe to The Athletic (you absolutely should, it's the best sports writing anywhere) there's a great piece on The Lead podcast - this story was first reported by Evan Drellich.
Guy I admire SO much because he's just so damned good?
Christian Yellich.
The Brewers are one of the current Big 3 teams under the most scrutiny (the other is Texas).
Read this article in Bleacher Nation.
It ends like this: "In conclusion, Christian Yelich hit .347/.451/.750 at Miller Park this year, and .324/.406/.655 last year. At Wrigley Field, he hit .229/.341/.457 this year, and .205/.273/.205 last year."

If this is true with hi tech stealing, it's about as revolting as it can get. 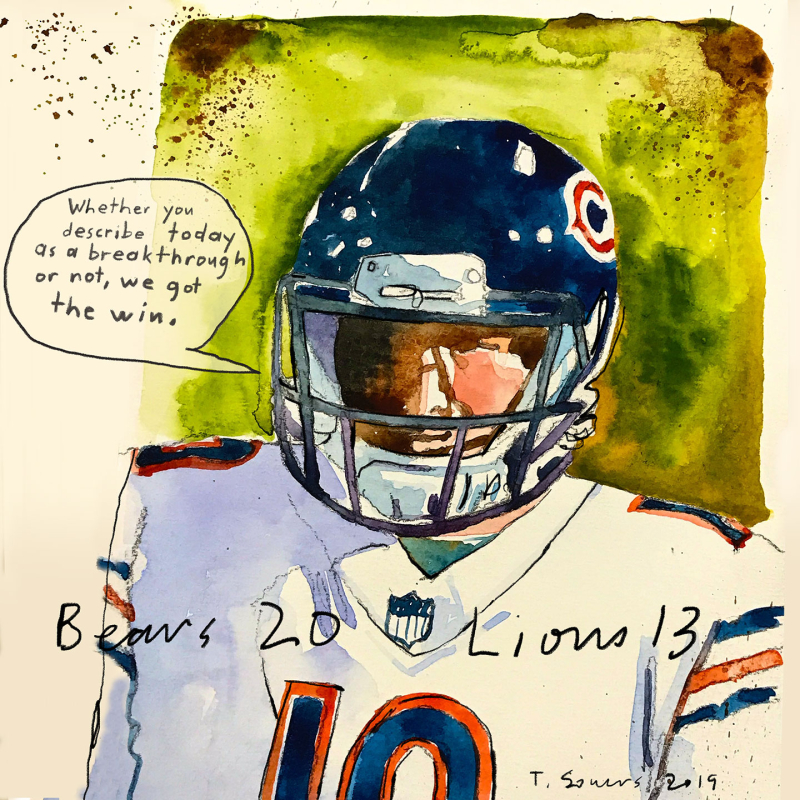 Well, it's a W.
Over a really awful Lions team missing their QB Matthew Stafford, who was an odd early Sunday morning scratch.
And Mitchell Trubisky - I've come to the conclusion that I can't be angry with this kid because none of this is his fault.
He didn't force anybody to move up in the draft and take him before all that other talent.
Did you watch the Packers v Panthers game?
There's Aaron Rodgers who's brilliant. And then there's the kid taking Cam Newton's spot, Kyle Allen.
He's 23. Trubisky's 25.
Listening to the game, I heard over and over again how Panther Offensive Coordinator Norv Turner made the offense simple for Allen to run.
And Allen was really so good. A couple mistakes but he came this close to beating the Packers in Green Bay.
In my head I'm screaming WHY CAN'T NAGY DO THAT FOR TRUBISKY AND WHY DID THE BEARS GET THE WRONG TURNER WAY BACK THEN?
Because they're the Bears.
Crap, I was trying to say something nice today...
Third Quarter Mitch was actually kind of impressive, and for him something to point to and build on.

And just when you thought the Bears were actually having a game that THEY could build on... the 4th quarter happened and you and I were right back where we started.
Back before the game started, wondering if that's an actual pro team Chicago is fielding.

One of the Bears really good ones, Danny Trevathan... I hope you accidentally looked away when they showed the replay.
Because that was an unexpected injury to witness.
I wish that when there are injuries, the network would review what they're about to show and if they still want to show it, warn people.
So that I never see that kind of grotesque stuff ever.
I can't unsee.
The arm bending the wrong way.
We'll see how long he's out, but it may be the rest of the year.
As unfortunate as that was, we got to see his backup come in and be awesome.
Nick Kwiatkoski was all over the place and "recorded nine tackles, one interception, one sack and one tackle-for-loss."

Okay, the Cubs.
Now it's way out in the open that perhaps the best trade option is Willson Contreras.
I'm hurling, but that's probably right.
Today's the first signal of hot stove - the GM meetings begin in Scottsdale.
We'll see what happens, but I've been reading about Cub catcher prospect Miguel Amaya. He's not ready to come up yet, but that's what they said about Contreras, too.
Sahadev Sharma at The Athletic (sub req) says, "The youngster should start next season at Double A, is advanced defensively and has the potential to be an above-average bat."
And in the meantime, Victor Caratini - his bat is effective because it's different than the others in the lineup (he's not a swing and miss homer guy).
I know the whole thing is awful and you'd like to keep everyone but... they'll have to give up something.

Alright, I gotta get out the freaking snow shovel.

Bears lose 4th in a row. 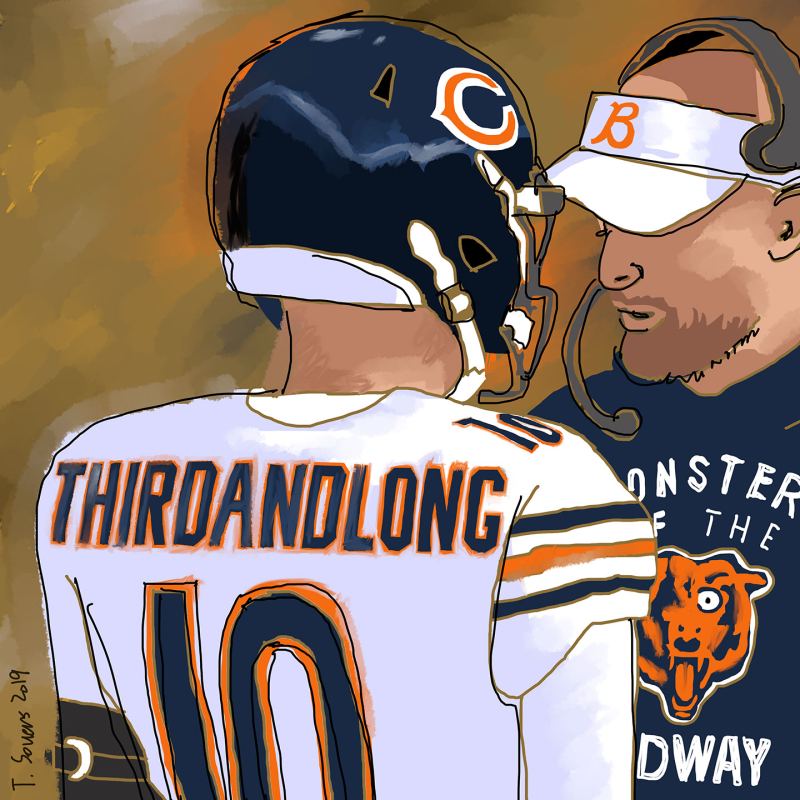 Sick of talking about it, so here's an illustration of what it's like watching this incompetent, insulting offense.

The good news yesterday was that Anthony Rizzo won another (3rd) Gold Glove award, and the Cubs picked up his $16.5 mil team option.
And also this hilarious congrats tweet from Yu Darvish: 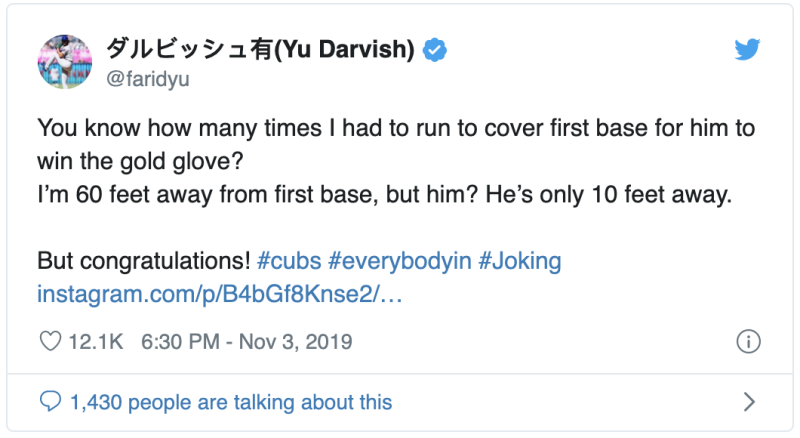 Fall Back.
On Sunday, move the minute hands on all your clocks one revolution back in time.
At least you get another hour of sleep.
Tomorrow morning, when your body is says, "Hey man, it's 6:30, GET OUT OF BED!", it'll actually be 5:30.
You can tell your body to shut it and go back to sleep.
The Spring Ahead thing - THAT one's a killer with the lost hour.
I think every single place that sells coffee should give it away free the morning after Spring Ahead.
But Fall Back... not so bad.
Except it'll get dark closer to 3pm than 9pm, and be a daily reminder that baseball's as far away as it gets.
Yuckola.
Oh well, that's all I got.
Except if... if you could take one hour back for the Cubs, what hour would it be?
Like, if you could take back that hour starting at 7:41 Arizona time on April 7th, 2016?
A Cubs v D-backs game officially started at 6:41 that night, and in that first hour we saw perhaps the worst Cubs injury in years and years.
That was the Schwarber's Knee game.
If you could take that hour back, then maybe Kyle wouldn't have collided with Dexter Fowler and spent almost the whole year injured.
He coulda had another year of experience under his belt.
You know how good he ended up last year, right?
2019 may have been the year he "figured it out".
Pre All-Star he OPSed 777.
Post All-Star that was .997.
The last 30 days of 2019 for Kyle Schwarber were Freaking BEAST-like: 91 at bats, 31 hits, 9 doubles, and 6 dingers.
He slashed .341/.419/.681.
Had he actually played (and gotten all the experience he missed) in 2016, he might have STARTED 2019 with those numbers.
Oh, but wait.
That would be messing with 2016 so... forget this whole thing.
Go back to whatever you were doing.
And turn back your clocks.