Strasburg was a genius last night. 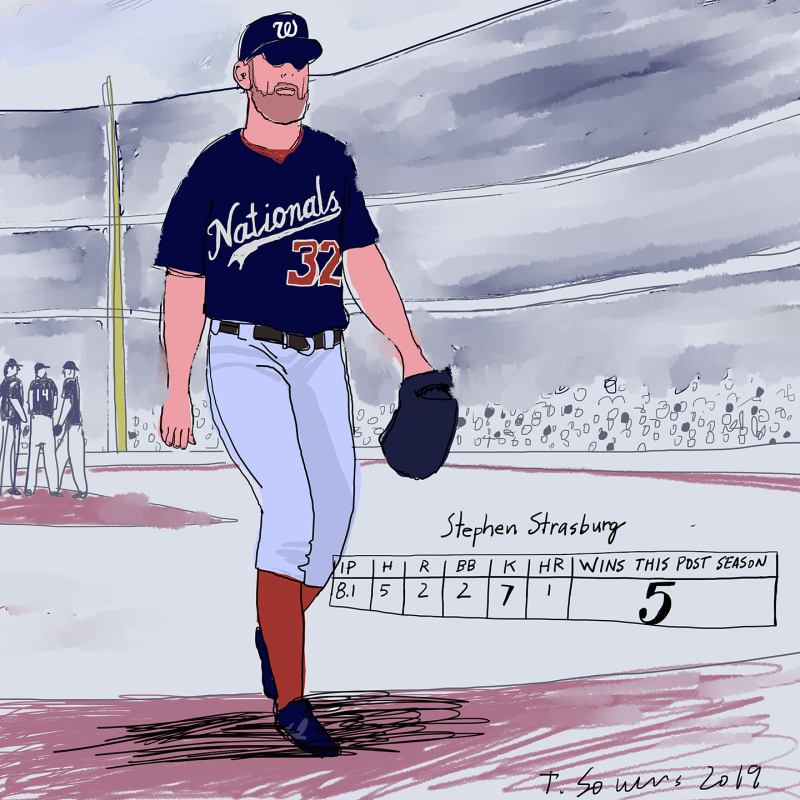 This World Series is way better than I thought it would be (it really helps to have a team I don't despise to root for).
Stephen Strasburg won his 5th game of the 2019 post season last night, and he won it with old school domination.
104 pitches over 8.1 innings in a Game 6 of the World Series.
He was amazing.
And tonight it'll fall on Max Scherzer's shoulders in what could be the neck-injured Big Story of this year's Series.
I gotta run or I'd spend serious time screaming about that idiotic ump making the unnecessary interference call that caused a 10 minute delay so the camera guys in NY could look at it too, everybody realize that it's non-reviewable, and then also get Dave Martinez thrown out of the game.
Oh the veins sticking out of his neck matched mine.
But whatever, the Nats Bats kept Justin Verlander's World Series loss streak of 6 in tact - he's never won one - and the Nats tied up the series 3 games apiece with their 7-2 win.

Tonight, while it's amazing that Max Scherzer is actually able to pitch, and it's Zack freaking Greinke for the Astros... I feel like we're going to see a TON of arms take their turns on the mound.
Super excited and hope the game's as good as advertised.

Strasburg was awesome, Nats win all 4 road games and are World Champs. Congrats to Davey Martinez and his guys. I still can't stand the Asstros. Great series. Now here's to David Ross as he assembles a staff to challenge the World Champs. Hey Bryce Harper, meet your new skipper yet? Ya think anyone misses you in DC?

Can't tell you how many times I heard THE NATS ARE NOT I REPEAT NOT A BETTER TEAM WITHOUT HARPER!
Great series. So happy the Astros came away with nothin and lost every home game.