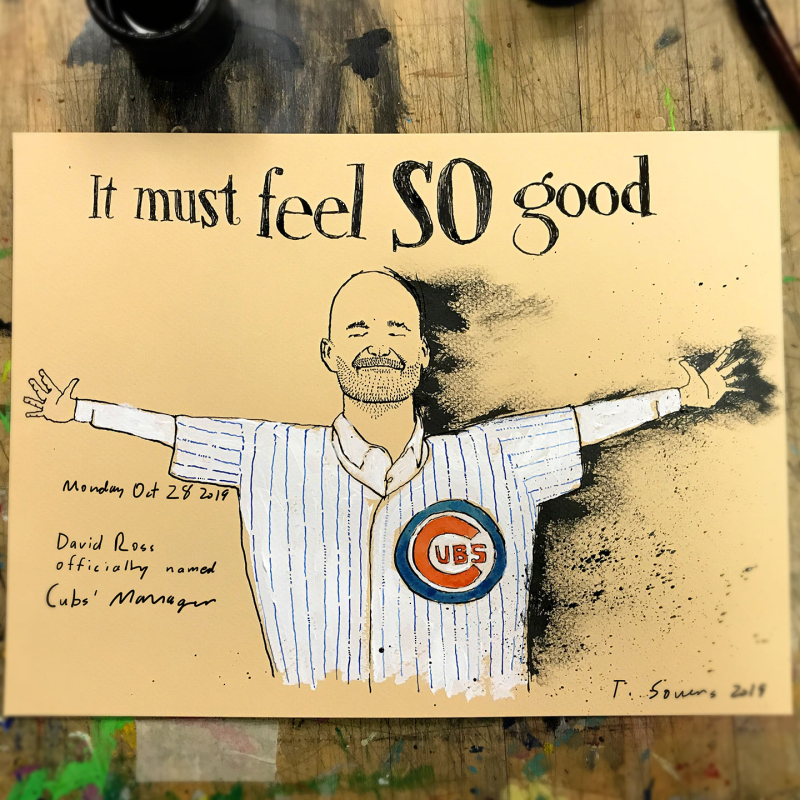 I hope you got to hear his introduction from Theo and Jed.
David Ross was officially "unveiled" as the new Cub manager in a pretty organized little press conference with... I don't know maybe 15 members of the press all asking a question one after the other.
A couple were addressed to both Ross and Epstein, the most angsty of which asked if David was going to be a "puppet" for Theo.
Of course even if someone were hired to be a puppet, they'd never come out and say so, right?
Theo was dead serious and said something like, if you wanted a puppet, you wouldn't hire David Ross.
They were both pretty adamant that Ross would be his own man.
That he ain't no fuzzy wuzzy Gwandpa Rossy in the dugout.
And they were both very clear on saying this wasn't a decision they'd made in advance.
Sure they knew Ross and all the stuff he already brings to the table, but I guess they really put both Ross and the other candidate, Joe Espada, through the ringer in the second interview (and only these two made it that far).
A fake press conference, come up with a schedule for a spring training day and a game day, a pregame speech for the team vs a made up team, an impromptu spring training speech to the team in the actual locker room filled with people... stuff like that.
He nailed it, and there he was at this real event with real press and he's really the manager of the Chicago Freaking Cubs.
He got to say all the stuff a manager gets to say before the reality of actual baseball, put on the hat and jersey.
Cue the applause.
It must feel so fantastic, and I'm sure you're as excited as I am for both Ross and the team. 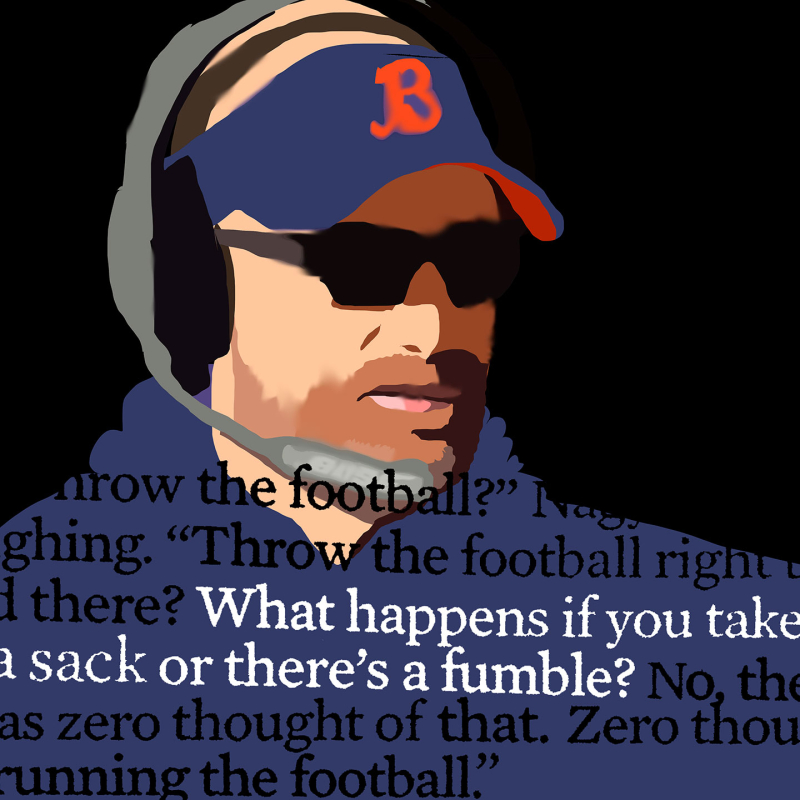 The stuff he said (and repeated today - he's sticking to that story)... I'm just flabbergasted.
I know that over time Mike Ditka has proved to be just a crappy human being, but if you recall the mid '80s, it was different then.
And he helped define what the Bears are, what their team personality was about.
If you couldn't beat the guy in front of you, you weren't there very long.
Can you imagine what '80s Ditka would think about Nagy's sort of... to me it's more than a lack of trust in his offense.
It's more like... why play the game?
Why get out of bed if you're thinking you might fall down the stairs?
Why work on that big project if you might fail?
There's something wrong with a head coach who's got that kind of philosophy, something that doesn't really inspire confidence.
It's football, man.
If you think your coach is fine with you not being able to beat your man and he'd just as soon take a freaking knee?
If I'm that player, rather than be inspired to kick the ass of the guy in front of me, I'm inspired to take a knee myself.
I really don't get it.
And I really miss my Bears.
It's not even Halloween and I've got MONTHS OF FREEZING COLD WEATHER with NOTHING TO LOOK FORWARD TO BREAKING THAT MONOTONY.

Okay lastly, tonight is game 6 of the World Series.
Stephen Strasburg vs Justin Verlander.
Hard to beat that.
And even though the Nats lost all 3 in Washington - that mess included a game 5 where Max Scherzer got a neck injury and couldn't pitch... that may come back to be the real story of the whole series.
A game 7 with Scherzer starting vs Greinke slants the thing a different way.
First, however, is Strasburg vs Verlander.

I'm firing up the grill.

Oh last thing.
Pumpkin Spice.
I'VE HAD IT WITH THAT STUFF! Nuthin' better than a game 7 in the World Series. And nuthin' stranger than a series where the home team lost the first 6 games! Imagine how many fans shelled out how much moolah to attend those kick in the gut home losses?!!!

Just meandering through a few topics this morning.

I've been reading about all the various opinions on the use of computerized strike zones. The umpires say things like "be careful what you wish for". I suppose there are a lot of downsides we fans may not have considered. They're experimenting with it in the AZ Fall League and there are actually instances of players arguing a computer-generated strike call!

So I got this weird idea this morning and I can't get it out of my head. Here goes:

Let the umpires continue to call the balls and strikes as always. But we go to the computer strike/ball call to settle a "player appeal" of any given pitch - one appeal allowed per at bat. If the batter is wrong, he's out. If the pitcher is wrong, the batter gets first base.

If you put the risk of being wrong on the player, I don't think you'd see many guys appealing a call. Most would just shut up and accept the umpire's judgement... kinda like the way the game was designed in the first place!

Finally...the pumpkin spice thing, I don't get it either.

After all, what exactly does a pumpkin smell like? For me, anything pumpkin I've ever been served smells like all the OTHER spices they've added to it!

Hey Bud,
I think that makes perfect sense except one thing - the problem apparently is that the computer system isn't quite working yet. Otherwise, there'd be serious talk about just switching over. So like, if you argued and it went to a review, the review would be the thing that people "up there" are saying isn't right yet. They've got all the camera angles to input information, they've got the rectangular strike zone, but still they don't trust it yet. BUT... should they ever get 100% happy with it, then an intermediate step like you're talking about would be ideal.
Again - I HATE EVERYTHING ABOUT CAMERAS AND ROBOTS MAKING CALLS IN BASEBALL AND STILL THINK THE GAME IS BETTER WITH 100% UMPS MAKING ALL THE CALLS. But the second they put the camera on the field to "help" with home run calls, they opened Pandora's box and now I just can't wait for them to go all in.
A blown call on a strike is every bit as important as a blown call on a home run.
And now, something you'll really love.
Take your next bottle of Jack and give it Pumpkin Spice! https://www.tastefullyeclectic.com/pumpkin-spice-bourbon-whiskey/

The closest I can get to that is maybe a slice of pumpkin pie alongside my Jack Daniels while I watch the Bears and Lions battle it out for last place in the NFC North.

I can't watch the Bears these days without Mr. Jack.