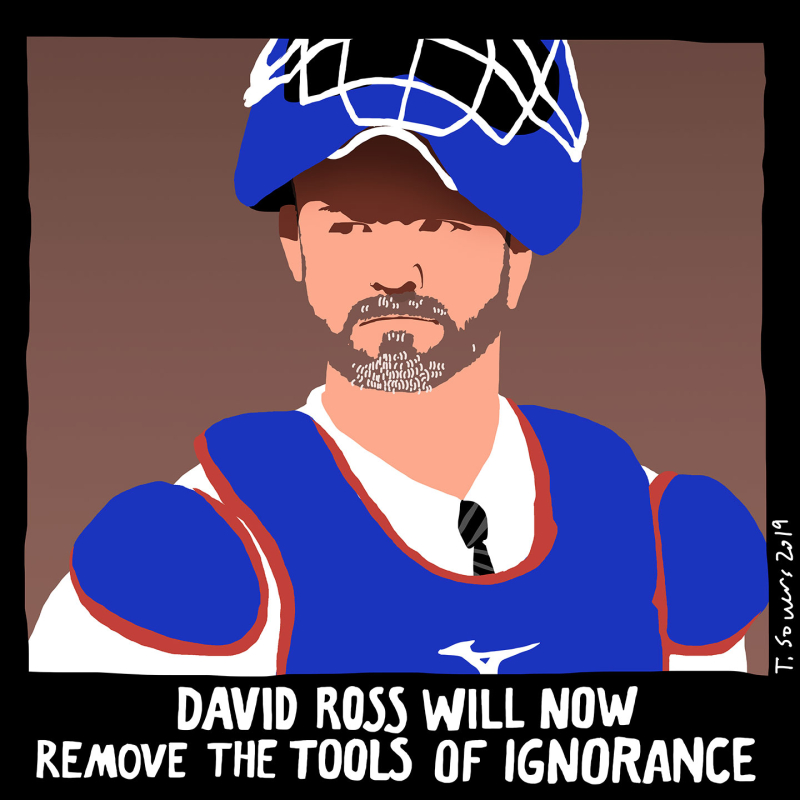 There hasn't been anything official official from the Cubs, but...
The drama, if you can call it that because this is really not unexpected, is over.
Theo and Jed have chosen the next manager of the Chicago Cubs, and it'll be David Ross.
It did get a little chatty online when they brought back Joe Espada for a second interview, but no.
It'll be Grandpa Rossy.

Both these guys would have been choices, and had it gone the other way I'd be writing the same kind of thing for Joe, but since that didn't happen...
WOOOO!
I've read about a thousand times that Ross is the guy who "gets in your face".
That's to quash any feelings of.. oh man, he's just everybody's old buddy.
And I believe that - we all read about it while he was playing and... his style of play was pretty serious.
You wanna try and run on Lester? I WILL THROW YOUR ASS OUT!
It's also sort of a non-story hiring a manager with no coaching experience when the candidate is this kind of guy - a former leader in the clubhouse and on the field.
He's also spent time as a special assistant to Theo and Jed, so it'll be a sort of management "team" of those 3 that runs the show we're all going to be cheering for next Summer.
With all the information available now, that "team" thing is really important, and I promise it's the opposite of the College of Coaches.
The other thing that's good about this is... every day the Cubs were searching for a manager rather than getting their shit together was a wasted day.
Hopefully Rossy gets into the guts of stuff asap.
I'm really going to miss Joe Maddon's "respect 90" and "try not to suck" and all the slogans and fun he brought to the table, and it'll be really interesting to see what Ross will do.
Dance maybe?
Can't wait.
Go Cubs.

Thrilled with the Nats win last night.
Davey Martinez, if he can pull this off (and there are  M I L E S  to go), he'll be able to write his own ticket for a long time.
Because he was managing last night.
Managing like it was the World Series.
He got the lead on Astros ace Gerrit Cole and pulled out all the stops with the pen to make that win happen.
I know their bullpen is limited, and I loved going to Corbin in the 6th.
Man, you win one in Houston... that is huge.
Both teams are so good.
Fun to watch.

Lots of questions: How much of a W-L difference in this team, as it's presently configured, can Mr. Ross make? How will he handle his first clubhouse / press crisis? How well will he interact with management? In other words, how will he handle stress, second-guessing and adversity?

And finally how will WE handle the way he handles this team...the one that Theo hands him (and we fans) to start next year?

Buckle up Cubs fans, because we're about to find out. I'm ready...

The last thing Ross said in the statement after he got the actual job was, "Now let's get to work."
Love that.