Here's Joe over the years in gifs.
SO gonna miss him.

Ha! Let somebody else skid for a while. Cubs 8 Cardinals 2. 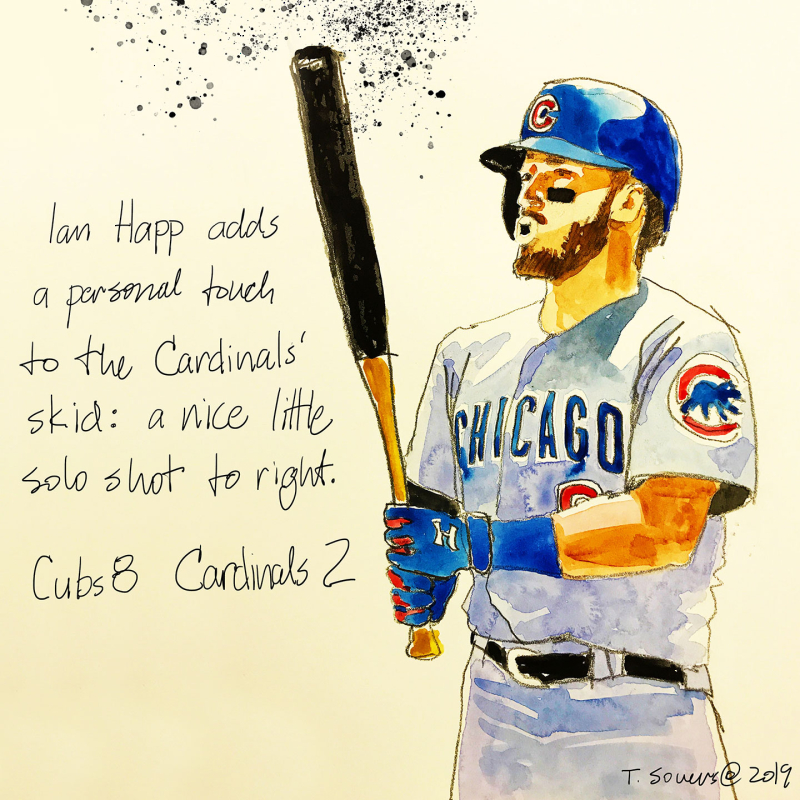 I know it means absolutely nothing at all, this 8-2 W on September 27th, 2019.
But it was so nice to get a text from a Cardinal fan saying, "Help. My brain is melting."
If only the Brewers coulda beat Colorado, it would be SO much more interesting.
Whatever, the magic number is 2 for St. Louis.

Alec Mills - it'll be interesting to see what the starting staff evolves to next year, but he's done really well.
Dakota Hudson was on the mound when I took my trip to St. Louis last year - in fact his first big league action came against the Cubs.
He pitched an inning, threw 13 pitches, struck out 2 Cubs and got Victor Caratini to ground out.
I knew right then that the guy would be a thorn, and this year he blossomed to a full thorny branch.
He went 5 innings, gave up 2 hits and no runs and struck out 10.
Whatever.
The Cubs took the Card bullpen apart, scored 7 in the 7th (what IS it about that 7th inning lately?), and never really looked back.
Ian Happ went 3 for 5 with a double and a dinger, and he'll finish off this year with an OPS in the mid .800s.
Kye Schwarber brought his average to .249 - so could easily end up over .250 and if he's SUPER lucky could get 3 homers in the next to games to reach 40.
Previously injured Pedro Strop and Brandon Kintzler looked really good at the end, too.

Cole Hamels will pitch today and... that's a proud man so expect a serious effort.
Even if the Cubs don't really mess with the standings, I still would love to see them mess with Cardinal heads today.
It's game #161.
Go Cubs.

Cubs eliminated. Is there anything left for 2019?

Cubs 2. Pirates 4.
Brewers 9. Reds 2.
Cardinals 90 - 69, Brewers 88 - 70, Cubs 82 - 76.
It's September 26th, do you know where your Cubs are?
They're out of it.
Done.
Kaput.
And they look spent, dejected, at a loss, beat.
But.
The Cardinals have lost 2 in a row.
It's been awhile since we had to adjust our thinking and root for the Cubs to spoil someone else's fun.
This whole deal will end for the Cubs with a 3-gamer in St. Louis.
Would it not be at least bittersweet to knock them down a peg, so that they had to play the Nats in the annual wacky Wildcard Game.
A reason to watch this weekend, the last 3 games of 2019.
But also... respect for Anthony Rizzo, for playing in what must be excruciating pain.
For El Mago, doing whatever he can with a busted thumb.
And maybe even Kris Bryant and his ankle issue.

But in the meantime, everything sucks.

Cubs 2 Pirates 9. 7th loss in a row and it all happened in the 7th inning. 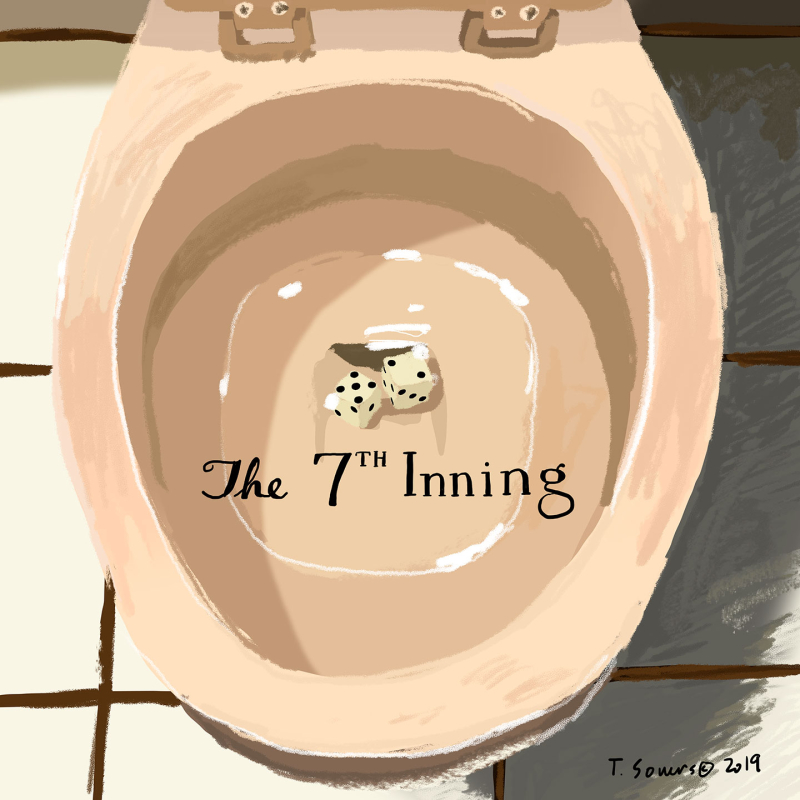 Maybe you were watching, too.
Kyle Hendricks was no hittin' the PIrates through the first 5.
Then he gave up a single to Kevin Newman to lead off the 6th, and then he picked him off first.
It was all very Professor-like.
Then came the 7th.
Double, single, single, single, and a double.
It's now 1-3 Pirates, nobody out.
Honestly, I do not recall Hendricks giving up 5 hits in a row without getting an out.
Ever.
So... it's the 7th, how come Joe's not pulling the plug on this thing?
He's been using so. many. pitchers.
But no, Hendricks stays in.
Erik Gonzalez hits a grounder, a hard one, that goes by Ben Zobrist and 2 more runs score.
Now it's 1-5 Pirates and Joe brings in David Phelps who gives up a single and then finally they get out #1.
It took Danny Hultzen and James Norwood to get the final 2 outs, but they also allow 2 more runs to score.
It was beyond unbelievable.
Just really really bad.
And it ended up Cubs 2 Pirates 9.
Their 7th consecutive loss in the current freefall from hell.

Whatever.
Maybe I'll calm down enough by 6 to turn the game on.
But that was... you keep thinking this is the absolute worst it can get, then comes that 7th and... I don't know.
Uncharted territory for this group of guys.
But not for me.

It may be Ben Zobrist's last game at Wrigley. 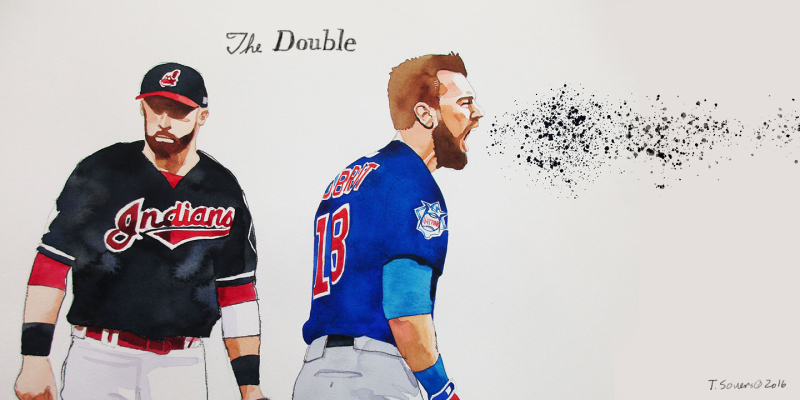 If it weren't for all the bad stuff happening right now, we might be thinking about more important things.
Respectful things.
Things that you'll remember for the rest of your life.
Today may be Ben Zobrist's last game at Wrigley.
So let's take a moment to think about Ben and all he's accomplished as a Chicago Cub.
Joe Maddon brought him here as an example of the kind of player he wanted on the team - one who could play multiple positions and play them well.
And as an example, I kinda think it was Zobrist who inspired my favorite Kris Bryant quote.
Remember at the start, when there was worry about Bryant being able to handle 3rd base and talk of him moving to the outfield, and someone asked him if that was a concern.
And Bryant answered, "I'm a baseball player, not a 3rd baseman."
That's a dream team mate, the opposite of selfish, and... not that Bryant isn't also that kinda guy, but just maybe a little something rubbed off Ben, too.
And then there's that double.
The one that won him the World Series MVP, and the Cubs their first World Series since Theodore Roosevelt was President of the United States.
He's one of the reasons I'm going to keep watching through the end of this season.

And if it turns out he's not a Cub next year, well it's hard to think of another player I'll miss more.

Okay like I said, there's plenty of time in the off-season for the moaning and finger pointing.
Yesterday was as painful a loss as any of us has ever experienced.
I maintain that Craig Kimbrel's introduction into this 2019 season has led to an unfair platform to judge him on.
Yeah, he claims he's physically good to go, but you can't say this has been an ordinary year for him by any means.
So anyway, just like Kimbrel, I'm gonna forget about yesterday and just go watch the game today.
Maybe Zobrist will tip his cap, and we can all pretend there's something in our eyes.

Alec Mills the lone bright spot in Cubs 4th loss in a row. 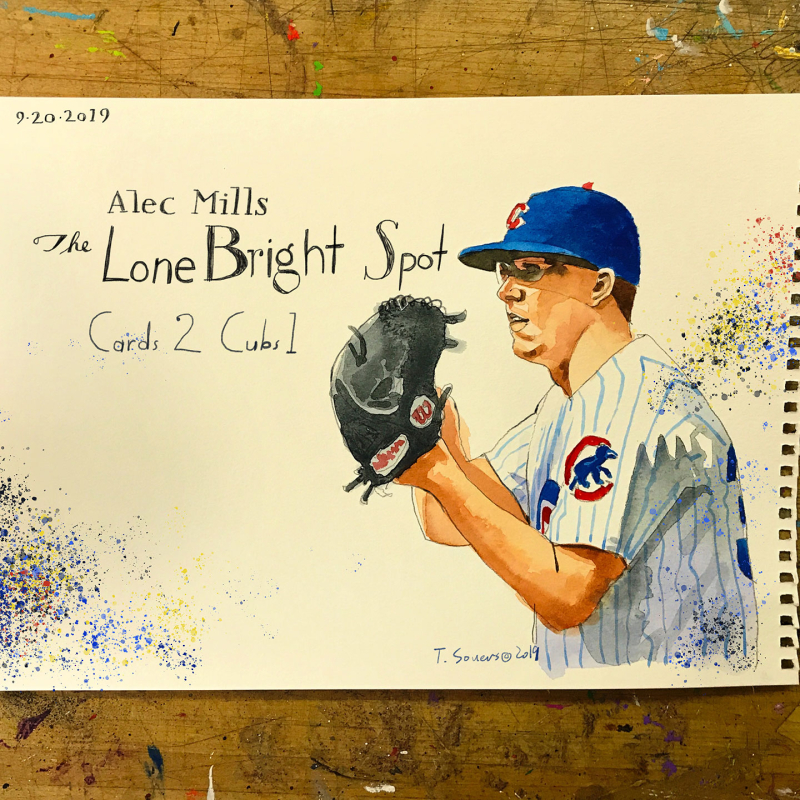 Alec Mills surprised us yesterday with 4.2 innings where he gave up just 2 hits and walks, no runs...and also struck out 6 Cardinals.
But the Cubs lost 1-2 as the bats once again just couldn't get it together when there were men on base who wanted to cross home plate.
Instead, all 9 of them watched the 3rd out, put on their gloves and let the Cards bat.

I know.
It's freaking horrible.
But there's still 8 Cubs baseball games to go.
And 5 of them happen to be against the Cardinals.
There'll be plenty of time later to point fingers.
For now, I'd rather watch.
Go Cubs.