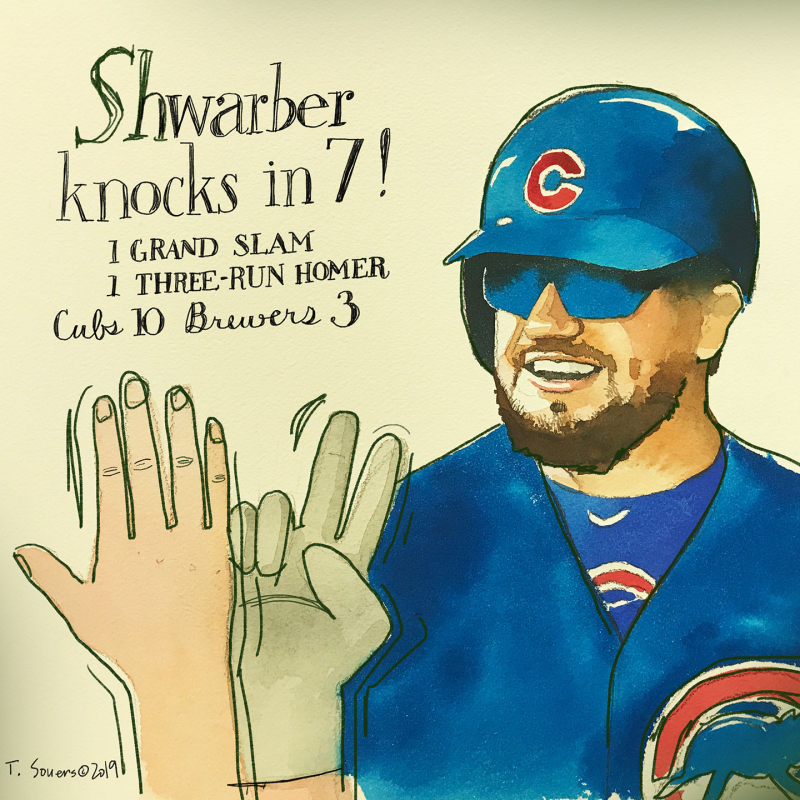 (Editor's Note: I already put this out in social and the mistake has been pointed out to me and yes I'm a complete moron. The score was 11-4, but I didn't watch the end because I was PAINTING THIS PAINTING and missed the last two runs. Also, "Editor's Note" is a joke that only I laugh at, sorry.)

Amazing what one little grand slam will do.
And to follow it up with another 3-run dinger made it even better.
Kyle Schwarber knocked in a career best 7 runs, and the dread of the previous 2 Brewer losses at least diminished.
That dread... it's like an evil prairie dog that comes out of it's little prairie dog cave and screams at the top of it's rodent lungs.
That happened to me, sitting in some farmer's woods when I was a kid and it scared. the. crap. outofme.
It sounded human.
Like 20' away.
But I'm meandering.
What a great and absolutely necessary victory.
Kyle Schwarber hit the longest grand slam in um... a really really long time I can't remember but saw on the Yankees/Red Sox game.
473 feet.
Then he hit a 1-2 fastball out the other way with a sort of whoopsie swing that looked like he was just protecting the plate.
Just strong.
Like an Avenger or something.
2 at bats, 7 runs, not bad.
And shortly after that, something else happened that made you feel like... oh yeah, I remember this.
In a good way.
Quintana throws one high and outside to Jesus Aguilar, who swings and hits a foul over in Rizzo territory, and you could tell he had a bead on it and a real chance.
He had to reach into the stands over somebody with a glove and somebody with a hat, but he caught it.
Like Rizzo.
And lately, that kind of play has sort of eluded our fav team and gave me that thing even you and I have been missing... confidence.
And THEN, well Schwarber had hit his second one and it was 7-zip and then blah blah blah the Brewers had a big inning when Quintana walked a couple guys and loaded the bases and blah blah the Brewers scored 3... but THEN Victor Caratini comes in to pinch hit for Brad Brach and pulls one out with Happ and Schwarber on base, so now it's 10 to 3.
And by the way, Ian Happ still hasn't gotten a hit but he's got a .364 OBP and has scored 3 runs because he walked 3 of his 7 at bats so far.
Because he found a way to get on base.
Hmm..

Okay, now it's a day of rest, so bullpen please, like... call Tom Brady and borrow his weird ass bed in a chamber or whatever he sleeps in and get some power napping in.
It's the Cardinals in St. Louis on Tuesday, and we need everyone to be ready to go ruin the post All Star break mojo they have going down there. 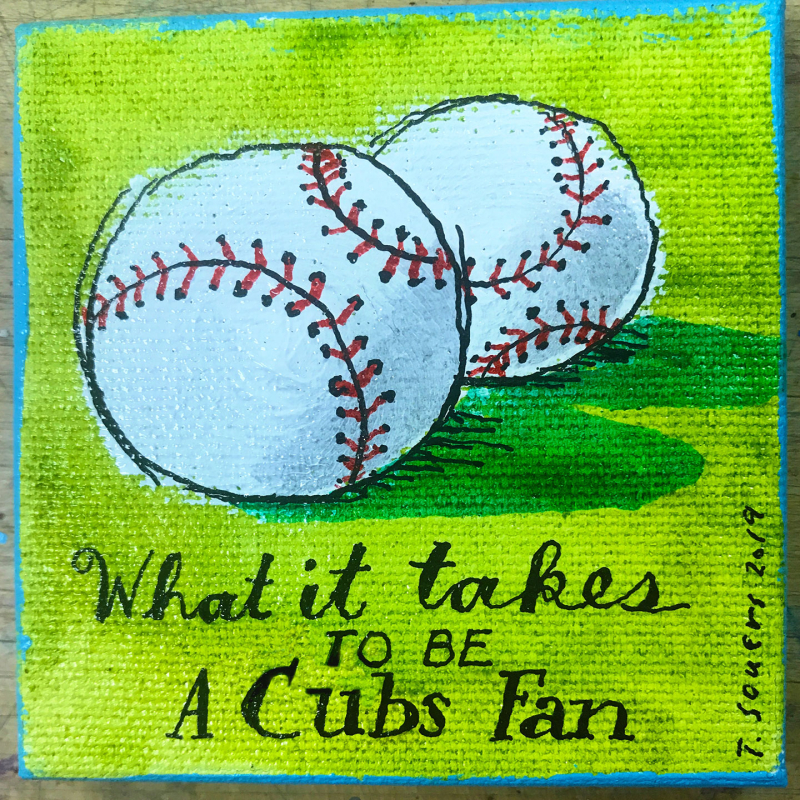 Okay, I'm done wallowing in loss.
The Cubs are about to play game three up at Miller Park vs the Crew and game 6 of this difficult road trip.
It's (if I counted wrong sorry, I'm the art guy) game 104 and there are 58 left.
11 more games (counting today) vs the Brewers, and 10 vs the Cards.
The Cardinals are super hot, having won 12 of their last 15.
Maybe they're the team that's going on the Big Run to distance themselves from the Central pack.
Yeah, well balls to them AND the Brewers.
I refuse to believe that this is all the Cubs have for offense, and I'm pretty sure Kimbrel isn't gonna give up 2 homers in an inning again, and there's still a couple days for Theo to do whatever it is he wants to do.
Let's see what happens.
It's a perfect summer day for the W flag to fly.
Go Cubs.

How you feeling, Cub Fans? 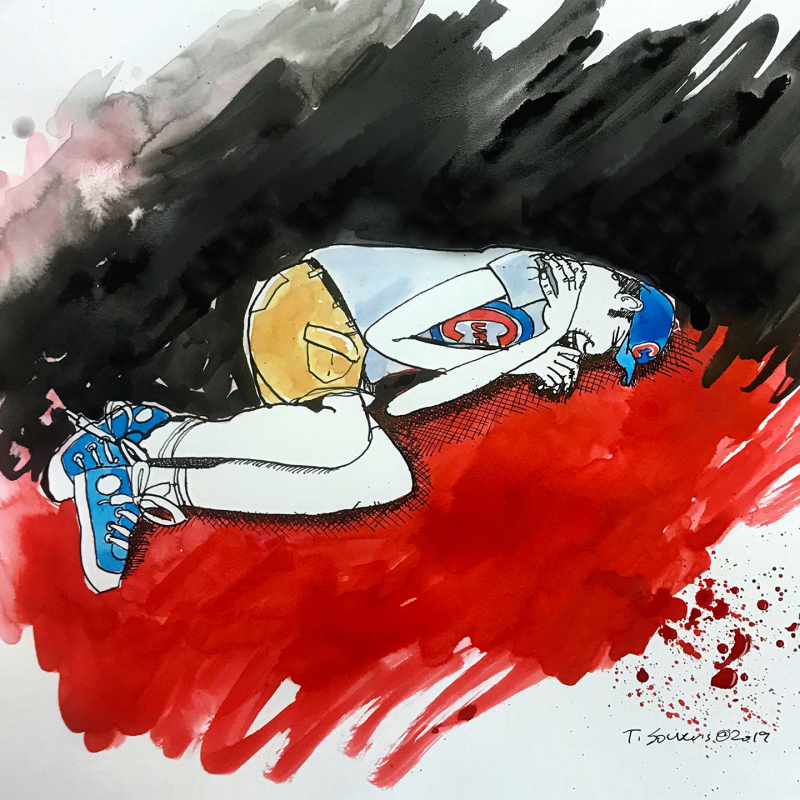 Sorry.
I have no words today.

Cub Fan moods. Extremely happy, or raging anger. No in between.

If we were all living in "Stranger Things", it would be normal world and the upside down.
But it's not.
It's just being a Cub Fan this season.
I think we're all used to the roller coaster ride, which I actually find pleasant.
But for some reason this year, the highs are really high, and the lows are pure anger, and there doesn't seem to be any regular time in between.
This road trip started off with an OH MY GOD THEO PLEASE TRASH THIS TEAM HALF THE ROSTER SUCKS.
This morning was more like well, they'll probably win the Central at least.
Maybe it's just the fact we're all dangling while waiting for whatever Theo and Jed are gonna do.
But I wish I could just be rational rather than emotional.
I wish for a week where I could think... man, just beat the teams you're supposed to beat and it'll all take care of itself.
Instead of EVERY time I listen to sports radio or talk to people in the hall or in bars they're all so depressing.
I've been out of my mind with work and we had a GREAT presentation yesterday and everyone was happy.
It was gorgeous out so I stopped at the Jewel to grab some fish to grill.
They had amazing looking giant salmon filets at the butcher counter.
I go, "I'll take about a pound of the salmon, please."
Guy says, "That's the expensive stuff. I can't cut that - you gotta buy a whole piece."
I go, "Ha. Ha. Good one."
He says, "Sorry, I'm not joking."
After this escalated for a bit I yelled, "FINE I'LL BUY MY FISH ELSEWHERE!
Turned around, bumped into a lady, dirty looks all around.
Got in the car, Pat Hughes says Anthony Rizzo got tossed for nothing, and Kris Bryant left the game for unknown reasons.
The guy in front of me is texting on Irving Park and going 18 MPH.
I BLAST the horn, and he looks at me in the mirror and slows down even more.
I went to a fishmarket, the salmon was $17 BUCKS a pound, which made me even happier.
I got home, my wife asks how the meeting went.
I say JUST GREAT!
Then the Cubs win but Bryant has a knee issue so THAT'S GREAT TOO.
I threw the expensive salmon on the grill and had to turn off the radio because according to those guys this team sucks.
Then I overcooked the fish.

At least the cat was happy.

Whatever.
I would like the Chicago Cubs to not lose this road trip.
Losing 2 in SF did not help.
Tomorrow it's the Brewers.
They lost a pitcher, should be reeling a bit, it should be well within my Cub Fan rights to expect to take a couple there.
Followed by the Cardinals, where I have to fall back on the old, "ANYthing can happen in these games."
Like the Baseball Gods have extra say in them or something.
HOW ABOUT THE CUBS WINNING A COUPLE THERE, GODS?

Man, I gotta calm down.

Anthony Rizzo breaks out of the no-homers-in-a-while in grand style. 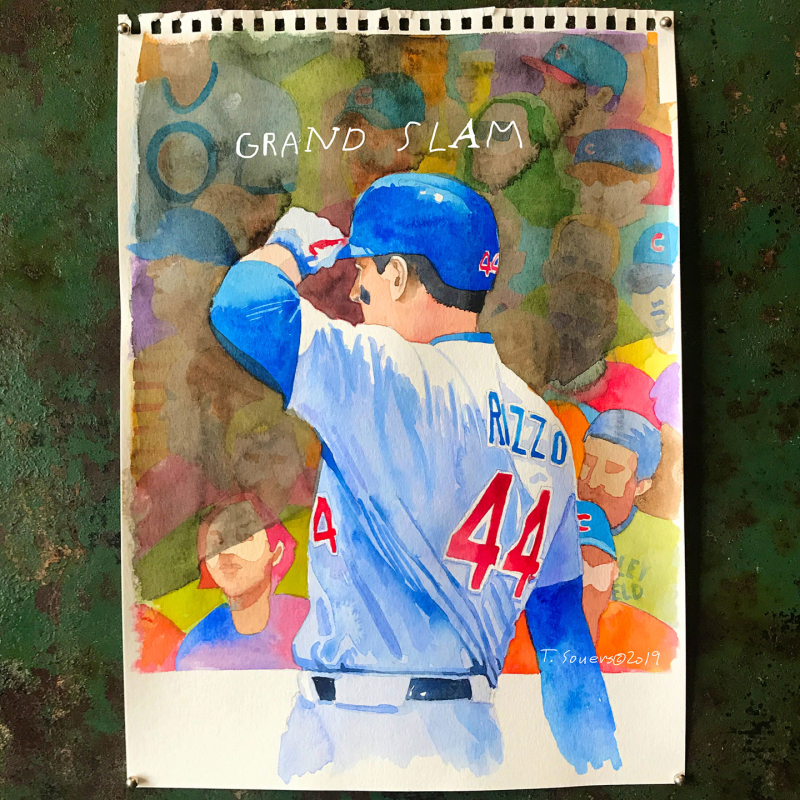 Well that was a little bit of a monkey off Anthony Rizzo's back.
Couldn't have come at a better time.
We were in a meeting when Oif said, "Wanna know what just happened with 2 outs? Almora. Single. Baez single. Bryant walks. Anthony Rizzo..."
"GRAND SLAM?!"
That second part was me.
So sweet, but this game was far from over.
Rizzo gave the Cubs a 4-3 lead right then, but that lead would turn into a tie twice more before David Bote would knock in Russell in a weird bases loaded situation. Bote hits a weaky grounder to third, Machado gets Rizzo at home, Padre catcher Francisco Meija throws to first to complete the double play, but Eric Hosmer never caught the ball. Russell goes home when the ball escapes.
Pretty big E there, Eric.
In the middle there, Javy Baez hit his 23rd dinger of 2019.
On the mound, Jon Lester... guy's just an animal. 6 innings, 12 hits, 4 runs, 6 Ks, and 105 pitches in what felt like 105 degree temp, I'm sure.
Because oh man it was hot.
I only got to hear about the last 2 innings, and Pat Hughes is just the freaking master of just knowing how to tell a baseball game like a story.
How happy are you with Craig Kimbrel?
An actual closer.
1 walk, 3 Ks.
Victory.
Just as I got to my garage, too.

Today is our block party.
Again, it's gonna be super hot.
I got 10 pounds of pork shoulder smoking at about 7, so that'll be ready early this evening.
In between there?
Jose Quintana vs Joey Lucchesi.
26 year old lefty with a 3.92 ERA and 7 wins, 4 losses.
This is the absolute definition of a hot summer day, and I'll have the radio on. 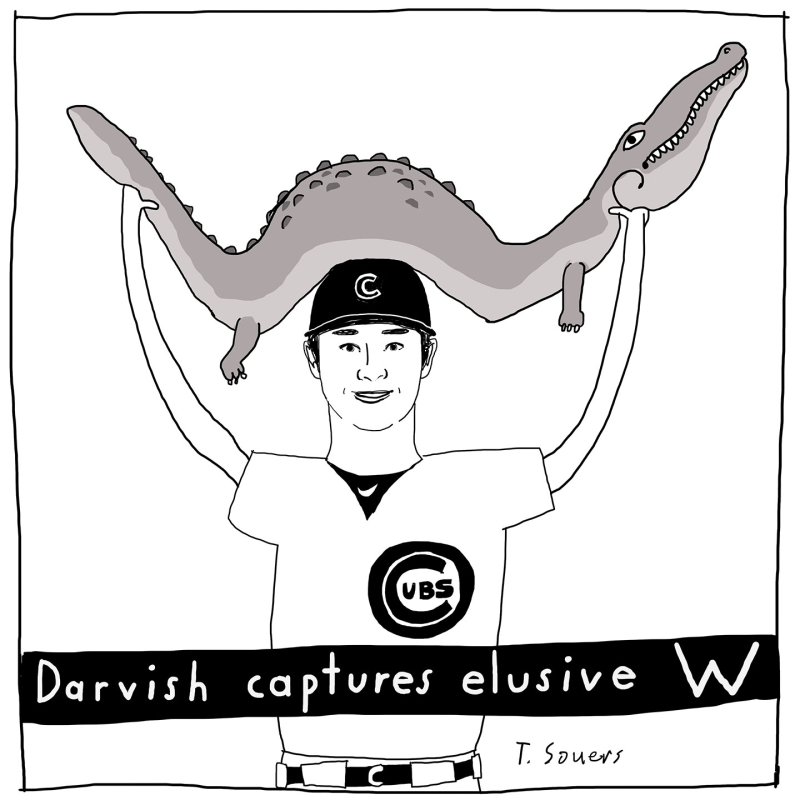 Not sure how many losses and no decisions he had at Wrigley before his first win on Wednesday.
And I'm not looking it up because it's depressing, BUT...
You could see that Yu Darvish had turned a corner last Friday vs the Pirates in his first start after the All Star break.
Then Wednesday vs the Reds, a team that the Cubs seem to just have a really hard time with, he did about the exact same thing.
6 innings, 7 strike outs, 2 hits, no walks and no runs.
Beautiful.
(And it happened the day after Chance the Snapper finally got caught by the alligator guy from Florida.)
Confidence seems to be that thing Darvish has trouble with, and perhaps he found it.
Both small and big picture, that's some seriously great news.
If he became dependable rather than a lucky strike extra, that's steamroller stuff.

Okay, when I was saying SOMEbody in the Central is gonna get hot and go on a big streak and leave the others behind... I'm dreaming but what if this was the start of that?
Bryant seems to be picking up. Schwarber is more threatening lately. Seems like all good news from Hamels...
Theo's still for sure gonna do something more, but a bunch of July wins would be just what the doc ordered.

Okay here are other photos I promised from Tues nite. 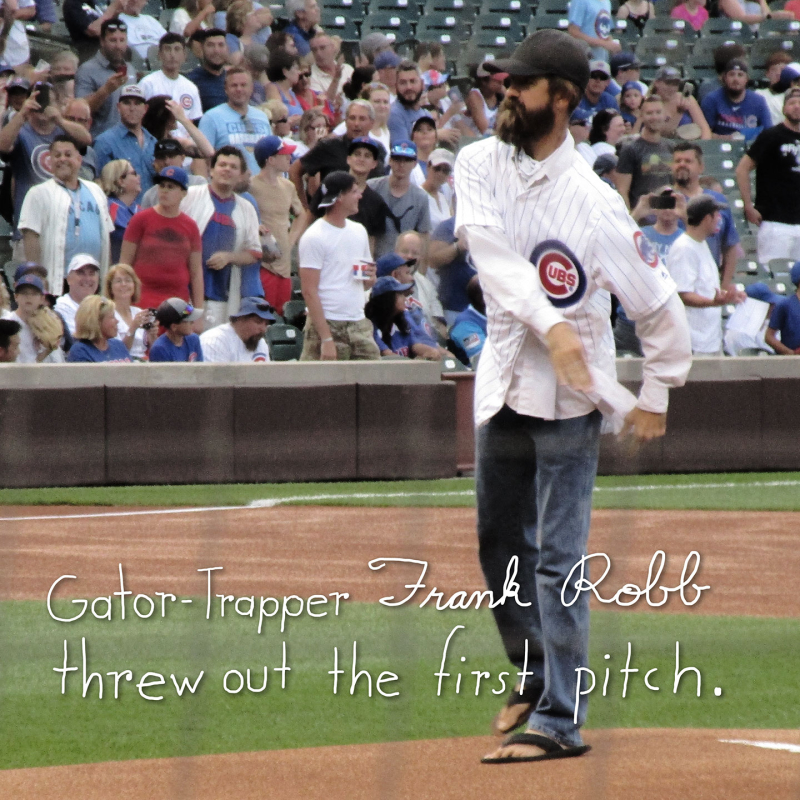 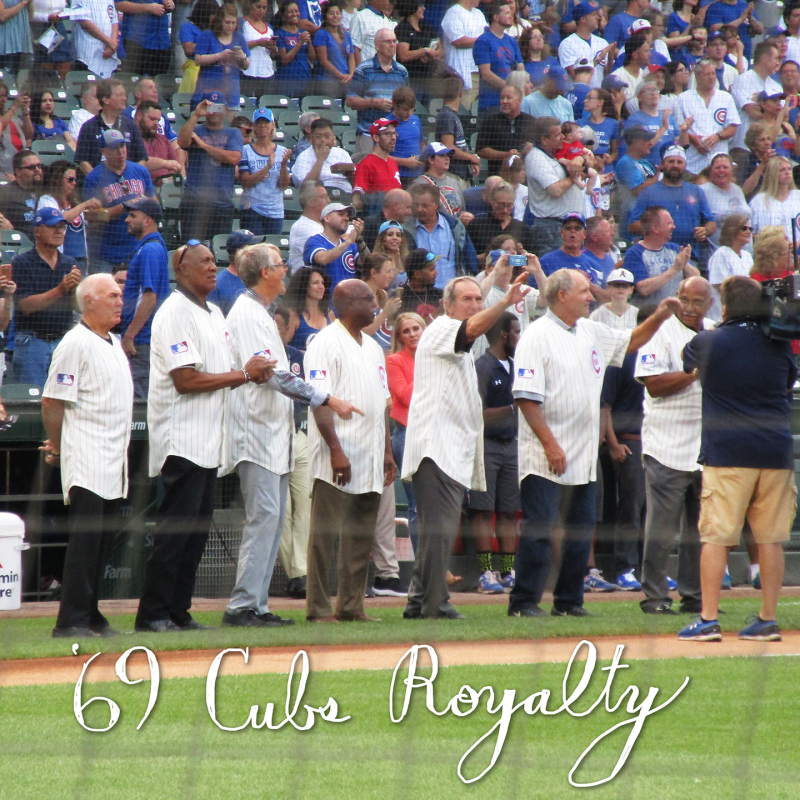 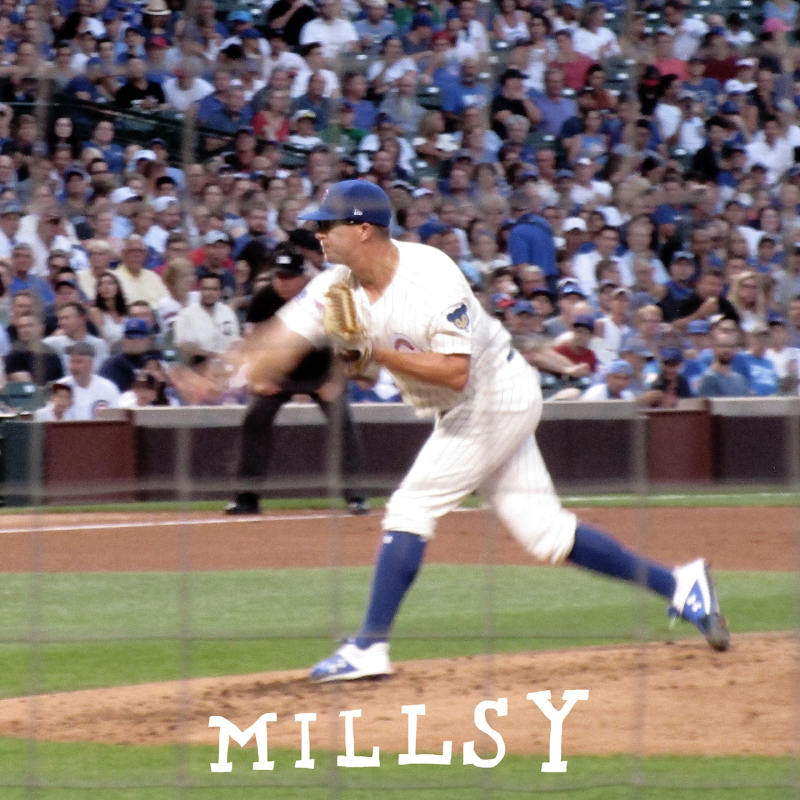 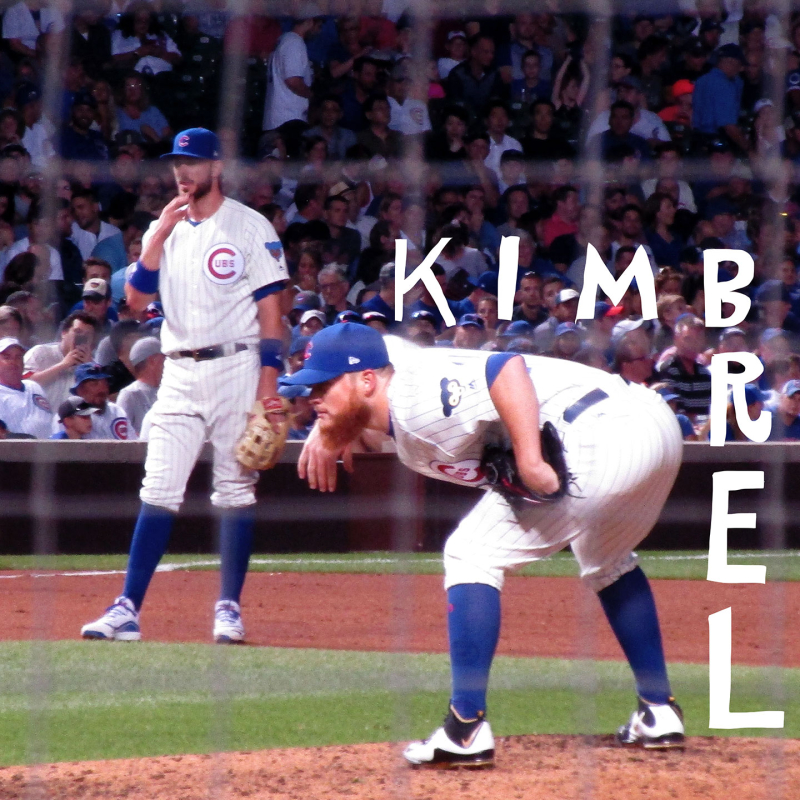