CUBS SWEEP! I know. It's just the Marlins, but still... 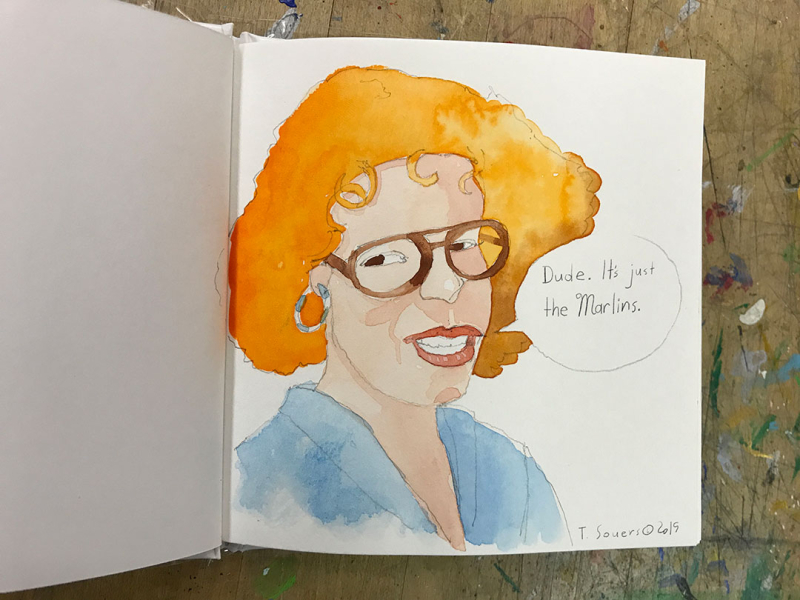 It's a sweep!
Everyone should be thrilled, even if the Marlin's are barely a triple A club.
But...why do people choose the negative path all the time?
I mean, think if the Cubs had lost 2 of 3 in Miami.
Disaster.
Ingredient one in the Recipe for Winning is: beat the teams you're supposed to.
Simple.
This little trip to Miami was a huge confidence boost for you, me and the team.
How about that starting pitching?
Chris Kamka tweets that in the last 6 games they've had a 1.13 ERA, 39.2 IP, 6 BB, 42 K, 2 HR, 0.832 WHIP.
How about Jason Heyward and Daniel Descalso?
Imagine what will happen once Kris Bryant shakes off this slumpy part and becomes Kris Bryant again?
And while the Cubs were creaming the Fish, the young (except Wainwright) Cardinals pitching staff had the horror of Christian Yellich embedded in their collective minds as some kind of Super Card Killer.
8 home runs vs. Cardinal pitching, and it's not even May.
That'll make your mind... not right.
And he hit another one last night v the Dodgers in the Crew loss.
With this sweep and the Diamondbacks coming to town today, perhaps our favorite team can even build some momentum.
4 wins in a row sounds alot more streak-like than 3 in a row.
And it's 0-3 Kyle Hendricks on the mound vs 30 year old rookie Merrill Kelly on a day where my weather app says mid 40's and shows a little spinning wind mill.
In or out, Mr. Wind?

Yu Darvish gets his first W. Yeah, it's a baby step... but bigger things should come.

Sorry.
Slammed.
No can write.
But you know what I mean.
Here are his numbers through four games.

Like I said, baby steps.
But I expect much bigger things as the season goes along.
Yu should too.
Haha!
That was a good one!
Okay maybe not, gotta run!

Schwarber rung up in a most unsatisfying end to a Cubs game.

What did Charlie Brown used to say?
Argh?
No, it was AAUGH! 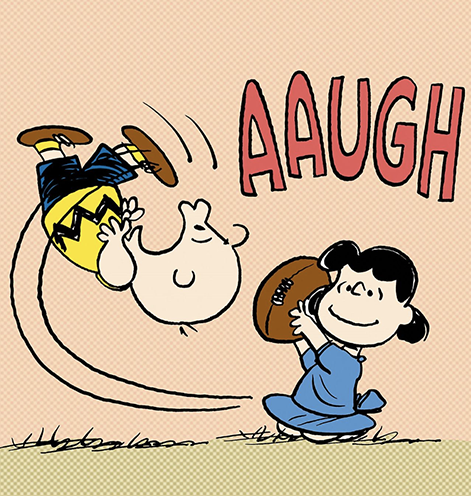 JUST when we thought we'd get a taste of come back victory, some ump called Kyle Schwarber out on a check swing, and we were all up and yelling at the tv.
Oh that one hurt.
Compared to the last couple starts by Quintana and Hamels, Kyle Hendricks was only so-so yesterday going 5 innings and giving up 3 (only 2 earned).
Then the pen gave up more and the Cubs never led all day long until...
Bottom of the 9th, Angel closer Cody Allen on the mound, and Zobrist connects solidly but flies out.
Then Rizzo walks, followed by a nutty El Mago double (he SO should have been thrown out at 2nd, but Angel RF Kole Calhoun's attention was on Rizzo).
So Cubs on 2nd and 3rd with super hot Jason Heyward up.
He delivers with a fly ball to left that Brian Goodwin dropped, so Rizzo scores and now Heyward's on first and Javy on third and all the Cubs need is a little dink.
Willson Contreras is WAY too eager and strikes out.
And now it's Kyle Schwarber, who's been striking out like a madman and really... this is the perfect situation.
If he can come through it'll be huge.
You and I are so on the edge of our seat.
2 balls, a miss, a foul, and another ball and now the count is full and Allen throws a breaking something that's low and outside that Schwarber flinches at with his bat.
The camera stays on him for a second and whew - he walked!
NO!
He suddenly whips off his helmet and starts to third base. Quick cut to the ump who called him out. Scharber's screaming, you're screaming, I'm screaming and after a scuffle where Javy's got to try and stop the bull from charging... it's over.
They go down the steps to the dugout, Maddon goes and gives the ump a piece of his mind, and it's just a sour taste in everyone's mouths.
Horrible ending.
And now it's snowing in Chicago and today's game has already been called, surely to be made up on September 23rd, which will mean the Cubs play 25 games without a day off to end the season.
Okay if not this game, SOME game will be made up on that day I swear, and you'll be screaming and I'll be screaming and...
Oh well, that's baseball.

Cubs win Home Opener and the bullpen finally comes through. 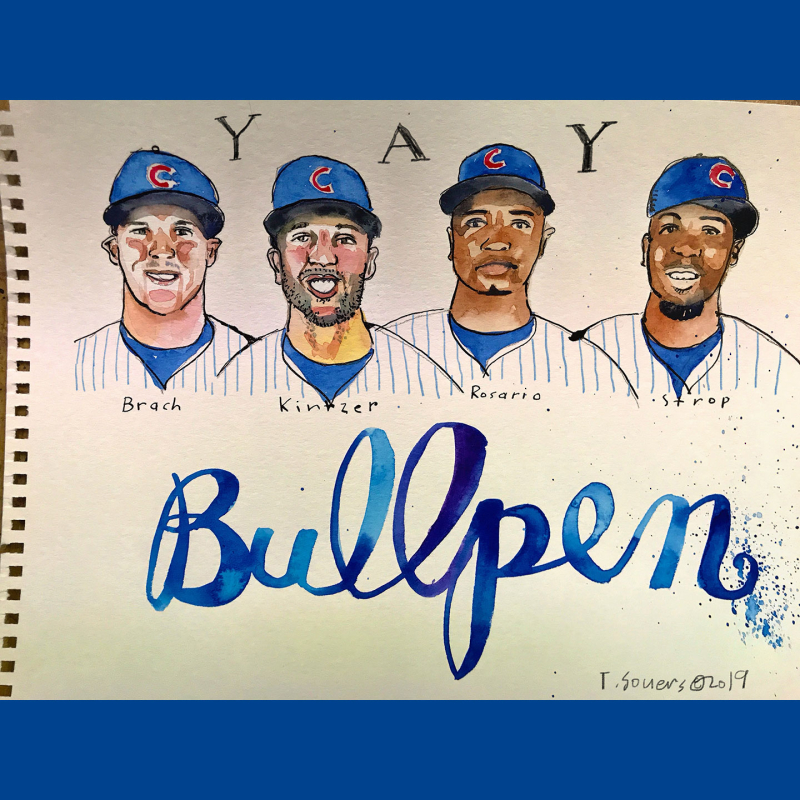 4 pitchers, 7 innings, 0 runs.
You could call that a baby step or a giant step for the Cub bullpen.
Either way, I'll SO take it.
The bad part was, the pen was pressed into service early because Jon Lester's hammie.
Lester is just such an admirable God: dependable, a codger, nobody competes harder or gives more effort.
Or plays thru pain.
So after he drove in the first run with a double, he then lugged it all the way home on Ben Zobrist's single to right.
That's alot of running and sliding.
And when he came in to pitch the top of the 3rd, he didn't look right and Joe took him out.
He tweaked his hammie, he'll get an MRI, and we'll just have to wait on that news.
But back to the bullpen...
So you and me and every Cub fan was FREAKING OUT and OH NO it's the bullpen coming in to ruin the nicest Opening Day as far as weather I've ever seen.
First came Brad Brach.
Lester's just allowed 2 singles, and Brach immediately gets a double play, which is EXACTLY what he needs to do there.
Hmmm...
Then a K.
Well, that was quick.
Then came Brandon Kintzler.
For sure he'll not induce a grounder, right?
Well, he hit a guy but otherwise gives up no hits and strikes out 2 in 2 innings.
What's going on?
Oh, Randy Rosario is next.
The guy who gave up the 3-run dinger that led Joe Maddon to respond with something like "I'm so sick of this shit" on camera, if you can read lips.
Well he gives up a couple hits, but also K's two and... nobody scores in his 2 innings.
Next comes my favorite part because by now I'd gotten "sick", drove home and was sitting in the sun sipping a Bell's Official Hazy IPA.
It's got the coolest can design ever: 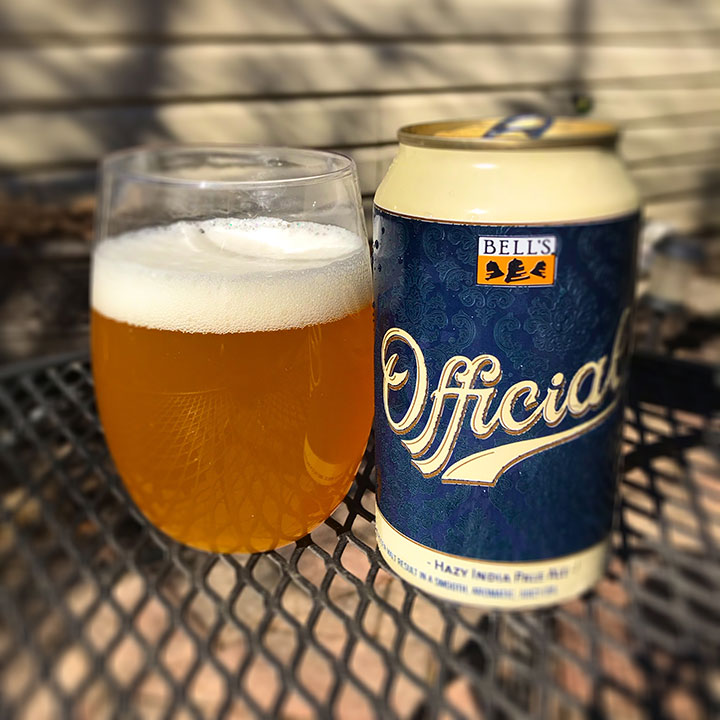 And got to listen to Pat and Ron take me the rest of the way, which was with Pedro Strop, the first guy I thought well... we're gonna be okay.
And the Cubs were.
He went the top of the 9th, gave up a hit and a walk, but ended up getting Colin Moran to GIDP.
W.
A shutout from Lester and the Pen.
AMAZING!
Seriously, that was the best possible thing that could have happened.
Nobody needed to perform and gain confidence more than those guys.
So cheers, Bullpen.
Lastly, the bats.
10 runs and a Schwarber 411 footer the other way.
Yep, 6 were unearned with 3 Pirate SS Kevin Newman E's in one inning, but whatever - it's been a weird year.
In fact, help me out here.
What are the weirdest things that have happened so far this year?
I wanna do a gif or something.
Besides 12 walks, 6 errors, a Rizzo liner off a pitcher's head and he stays in the game, a Baez single off a bounced pitch...
Help please.
And Go Cubs. 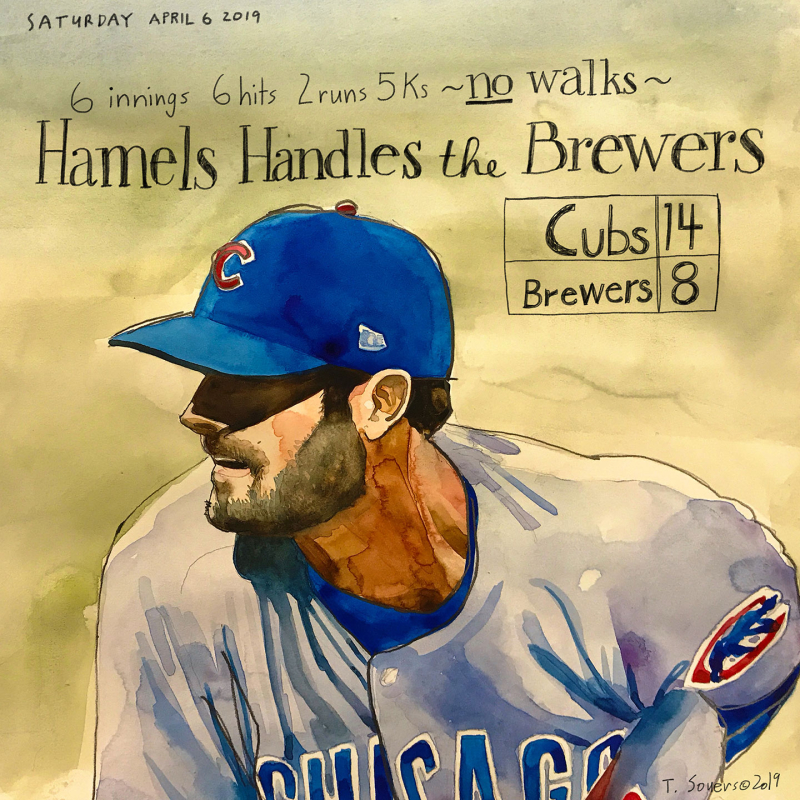 The last guy Cole Hamels faced was Yasmani Grandal.
Hamels had thrown just over 100 pitches, and he was just so... pro.
He threw 3 pitches, each out of the zone, trying to get Grandal to fish.
Grandal didn't.
So it was 3-0 and you could just see Hamels go, "Okay, come and get it."
He threw 6 consecutive strikes that ended with a weak grounder for out #18.
It was SUCH a great performance from a great veteran pitcher and EXACTLY what the Cubs needed.
Of course, it took a couple innings for his mojo to arrive.
Lorenzo Cain started the game off with his first homer of 2019 and a tiny Lou Piniella popped up on your shoulder to whisper in your ear: "Well, what can you do, fellas?"
But then the other really great part of the evening happened in the form of wooden baseball bats owned by the Cubs.
This young Brewer pitcher, Corbin Burnes... he got 7 wins vs no losses as a reliever last year.
In his entire young Big League Life, he'd never had to eat defeat.
So it was important that the Cubs put this guy down.
Which they did.
Jason Heyward - he had what had to be his best day at the plate as a Cub.
2 homers, 2 stolen bases, 3 hits, 2 walks, 3 runs scored, 3 knocked in... he was AMAZING!
So he starts off with one of his homers that also scores Schwarber.
In the 5th, Victor Caratini, the guy who's not supposed to really have any power, he hit a 2-run homer to put the Cubs up for good.
And really everybody hit except Kris Bryant.
It was 7-2 when Ryan Braun hit his 3-run homer off just-brought-up reliever Kyle Ryan.
But in the 8th, the bats just did a beat down and at the end of the inning it was 14 to 5.
And the team that, the day before, was 1-5 but had scored an average of almost 8 runs a game... that team finally won their second game.
You and I let out that breath we'd been holding for what seemed like a month, and all is right in the world again.
(Okay at least it's a leg up and out of the hole.)
And today we're all thinking well, if we can take 2 in Milwaukee... that ain't bad at all.

Oh yeah... Corbin Burnes.
He woke up this morning, rolled over and looked on the floor at the puddle of Loss he gagged up last night.
Get used to that taste, bud.

Cubs need to take a little pressure off.

When the Cubs screwed the pooch at the end of last year, and we all agreed that yep... wins in April are just as important as the ones in September?
That put pressure, kind of an unseen one back then, on not just the players and Joe Maddon and Cubs Management, it also put pressure on you and me.
And we're collectively writhing in pain at this awful start.
Luckily, our team has Joe Maddon, and he's a prime example of why, way back when, someone called some manager "Skipper".
Joe is going to captain our collective way out of this pressurized mess of our own making.
Here's what he said on the SCORE yesterday when asked what he thought of this pressure:

"Fun," Maddon said. "Absolute fun. I cannot have more fun on a daily basis. I've talked about this before and I mean this sincerely, people are throwing that word around 'pressure.' Expectations -- that's where you want to be. I don't want to be somewhere where that's not part of the culture.

"Think about walking in the door in 2015 and not having had won the World Series yet, not having been to the playoffs in a bit and then you run through it four years in a row. Again, I think a lot of this narrative is very skewed. A lot of it's misunderstood. And if I try to defend myself, I think it comes across as making excuses, so I refuse to do that."

Ahh.
Perspective and wisdom coming from our guy.
Of course, a couple wins would help.
But it's all. Gonna. Work. Out.
Hopefully starting tonight.