Kyle Schwarber is gonna have a monster 2019.

Okay.
There's a big fat elephant in the room.
Can't not pay attention to it.
My wife and I went to the early showing of Jordan Peele's "Us".
Got in the car about 8 (long movie).
Oddly, the game's been on for an hour, but it's just... the bottom of the 2nd?
Pat is saying the Cubs are up by 3 but Darvish has already walked 3.
At home, turned the game on.
Probably like you, I've got about 5 people I regularly text during games.
This was my text: 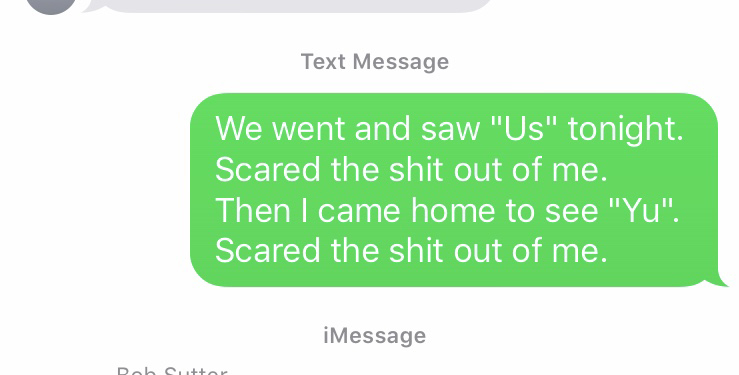 There were a couple ways that Yu could have started off the season, depending on how much gray area you prefer.
But if you go black and white, this was about as bad as it could have been.
I also thought hell, it's okay - if the Cubs win then no harm no foul.
Then Carl Edwards came in. Stunk the joint up.
These are 2 guys the Cubs absolutely need to be better than just good this year.
I just close my eyes, shake my head and say oh my god...

Oh well, there was also plenty of good.
Waaay back in 2015, when this group of baby bats were just assembling, we were able to imagine a future Murderer's Row.
A Big Red Machine, only Blue.
And one of those guys was Kyle Schwarber.
Did you see that blast to center last night?
I can't remember if it was JD or Len, but one of 'em said they thought he was going to have a monster season.
Thus the gif.
And then later, Schwarber lays the brilliant beat-the-shift bunt that bounced off 3rd.
Overall the bats look fantastic, and you have to think that on any normally-pitched evening WHERE THE CUBS DON'T WALK TWELVE FREAKING BATTERS, six runs will be enough for a W.

There's plenty to be optimistic about and while I tend to be that way a lot, this is one of those games that can't happen this year.
Especially early.
Doesn't matter who's on the "Injured List" (that's the new DL), doesn't matter what pitchers are available.
I mean, sure the Cubs can lose a game here and there - that's baseball.
But they can NOT let them slip away.

Cole Hamels vs ex Card Lance Lynn this afternoon at 3:05.
Be nice to win this first series before getting on a plant to Atlanta.
Go Cubs. 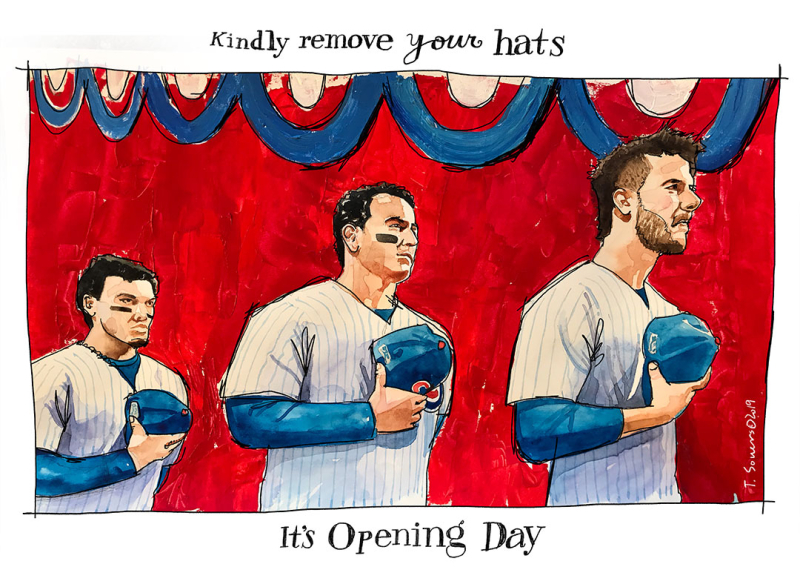 Baseball.
Like a house falling out of that tornado that squashed the Winter Witch, it's here.
It's gonna be 60 in Chicago today.
I've got a Cubs tshirt and my flip flops on, birds are chirping, coffee is delicious, I let a guy merge in front of me... it's just so dang happy out.
I think we need this particular Opening Day in the worst way.
Get the last bit of shock from last year's ending out of your system and breathe in the sweet air of this new season.
Jon Lester's on the mound.
Kris Bryant's shoulder feels great - we should be expecting him to kick his rich buddy B. Harper's ass in the MVP voting.
That's unless El Mago can pick it up a tad more, and the #1 an #2 MVP guys are on the same team from Chicago.
But then there's Captain Rizzo, who... ahh it's unrealistic to think there could be 3 MVP candidates on one team, right?
I can't really describe this but, even though I say the names of these Cubs daily, it's odd to write them down today.
Like they were just a fable yesterday, but today they showed up in the flesh.

I could blather on about all the pressure of the early part of this season, Joe's contract, what the Brewers are doing, the worries of the bullpen but... nahhh.
Baseball's here.
All that matters. 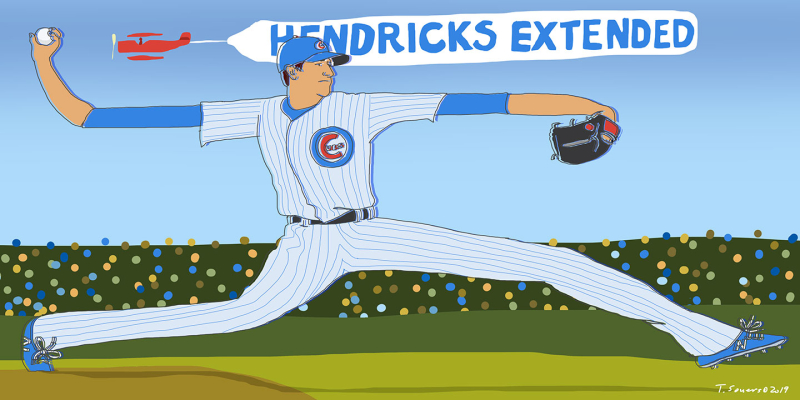 Well, pretty sure I speak for all of you when I say THIS IS SO FANTASTIC!
The Cubs gave Kyle Hendricks a 4 year extension with $55 mil and change.
Such a great team guy, such a great competitor, and I really look forward to his key wins this season.
Just the best.

Okay, it's the Night Before Christmas.
Tomorrow we'll officially begin Summer with our favorite team here to entertain us for the next ohhhhhhh, let's go ahead and say 7 months.
Go Cubs. 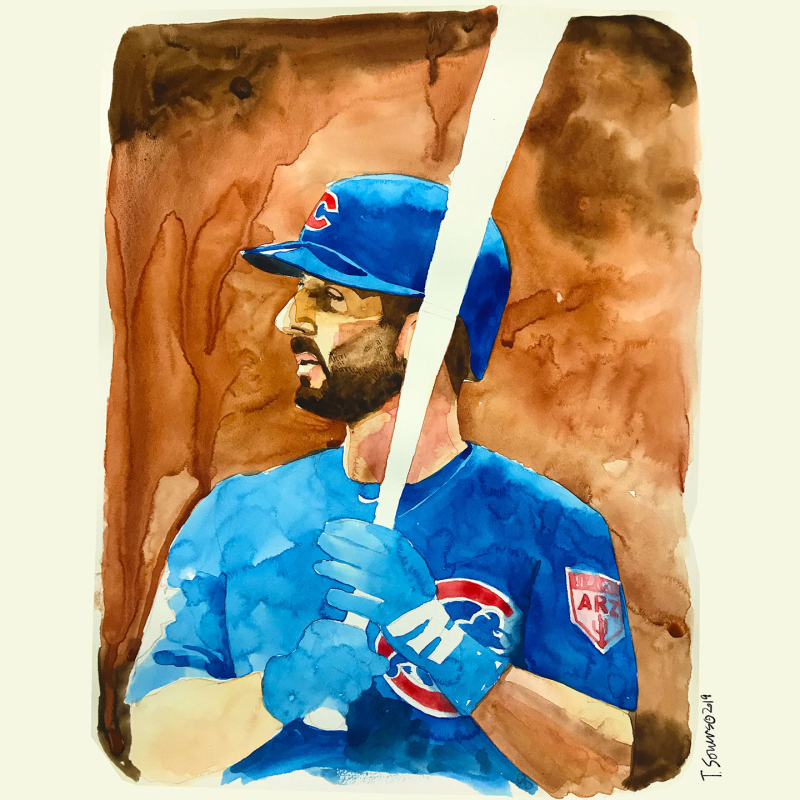 We know him mostly as... a Cardinal.
But now Daniel Descalso is going to try to help put up the blue W flags at Wrigley Field as our new lefty bat off the bench taking Tommy La Stella's place.
I say "off the bench", but with Happ in Iowa, Addison Russell on his suspension, and Ben Zobrist (hopefully) being kept on a rested playing schedule, we'll probably see alot of Descalso early in the season.
He's played all kinds of positions (so Maddon already loves him I'm sure), mostly 2nd but also 1st, 3rd and left field.
He's a career .240/.324/.370 guy, but last year with the DBacks was his best yet at .238/.353/.436 with 13 dingers.
He's also got a 2 year contract with our fav team, $5 mil with an option for a 3rd year.
Lastly, he's obviously a seasoned vet, and supposed to be a good clubhouse guy.
That last part has been a priority for the Cubs ever since the departure of David Ross, so it'll be interesting to see if he takes on that role (nobody will be Grandpa Rossy, but maybe he'll be Uncle Danny).

Last night the Cubs beat the Red Sox 3-2.
Cole Hamels went 5 innings and gave up a run and 3 hits AND hit a homer (what?).
Strop came in for 3 batters, each of them outs, two of them Ks.
Lefty Randy Rosario got the win.

Okay, one more ST game vs the Red Sox, then a day off, and then at 3:35 PM on Thursday afternoon we'll be treated to a rerun of Murder She Wrote starring Angela Lansbury as professional writer and amateur sleuth Jessica Fletcher. It's that one episode where she figures out that the insurance guy is really the murderer. Seriously it's an AWESOME one. Be sure to watch. 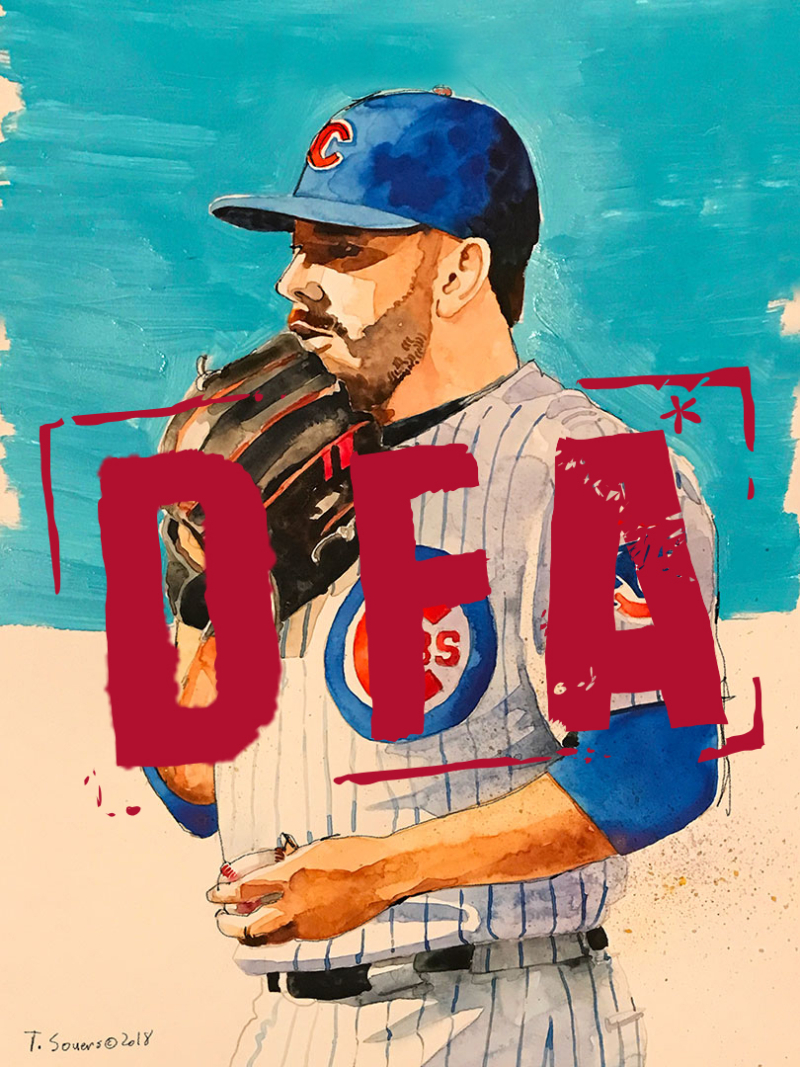 The Cubs DFA'd Brian Duensing yesterday, right on the heels of sending Ian Happ to the minors.
Then, Theo said that October really starts in March, just in case you're not getting how important that white flag with the "W" on it will be early this season.
But really, there should be an asterisk on Duensing's DFA notice, because I don't think it means he's not in the org any more.
"The Cubs have 10 days to trade, waive or release Duensing."
And they still owe him $3.5 million for the rest of this year.
Do you think any team is going to want him in a trade, or that he won't clear waivers?
Nope.
And the Cubs ain't throwing that money away.
He'll end up in Iowa and the Cubs will keep their fingers crossed that he remembers how he did what he did in 2017 to earn the $7 million dollar, 2 year contract. Which was being an effective and reliable left handed bullpen arm.
He just had a crap Spring and the Cubs rightly figure he won't help with the early W's.

If you watched the "game" yesterday (quotes because it was a 24-6 slaughter over the Pads), newly acquired Tim Collins pitched the 5th.
He's 5' 7" tall and a fastball/curveball guy (at least that's what we saw), and he was pretty impressive just going after guys.
A 3-pitch K with the first guy looking, and then flyball and ground outs.
5 pitches.
Apparently the Cubs have been thinking about the guy for a long time, and now he'll be in Iowa.
The Cubs were up by a million and the Pads had 6 runs and really, the Cubs bullpen from Collins on out was spectacular.
Which was good because Brad Brach gave up back to back homers followed by back to back walks in the 4th.
Allen Webster, the righty with the 1.50 Spring ERA, gave up nothin'.
And Dillon Maples was in mow-em-down mode with 3 Ks in his inning of work.
Webster's right handedness may keep him in the minors, but Theo says he's been the best of anybody all Spring, so... we'll probably see him later if he doesn't make it out of the gate.

Okay Thursday, hurry up and GET HERE!
It feels like it's been years since real baseball.
Go Cubs.

Cubs Ian Happ. Back to Iowa. 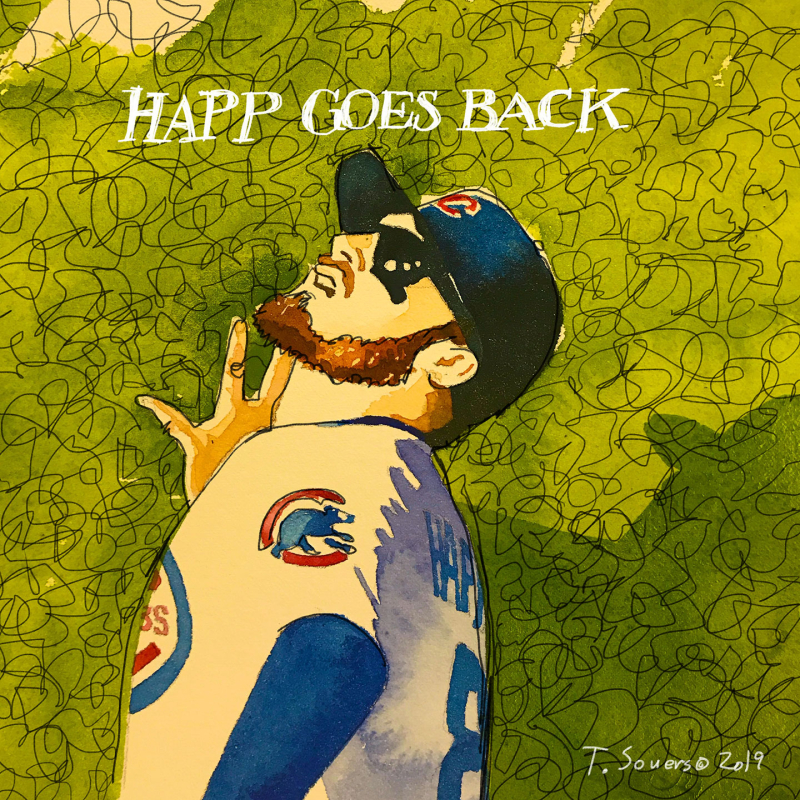 Wow.
Right when you think it's just one smooth sailing ship, someone goes overboard.
Ian Happ got sent back to Iowa yesterday. When Mr. Maddon told Mr. Happ, Mr. Happ was not happy.
And it's all about Happ getting consistent at bats down there where he wouldn't have gotten them up here, about ending last season and going thru this spring with a dead bat.
It's not really written in stone yet, but if you go to the Cubs site, Happ's already gone and Zagunis is the 4th outfielder. 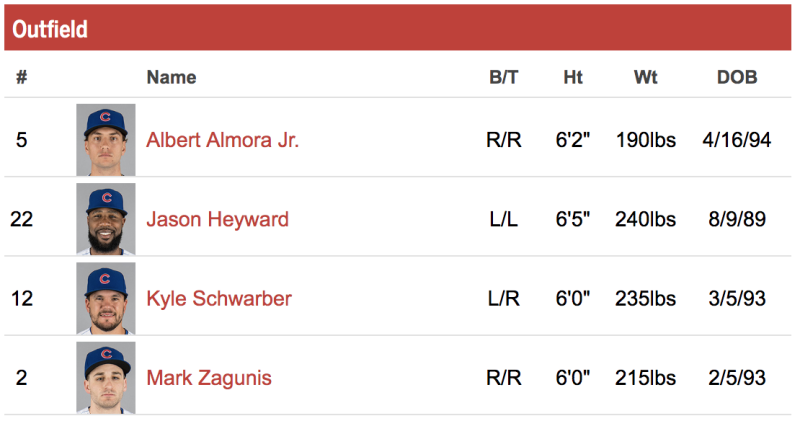 Because I actually look at that roster on the Cubs site periodically and always have, I can tell you that normally the way the website works is... you'll hear about a roster change during Spring Training, and it'll take a couple days for it to actually change on the site.
In fact, there's usually someone on the roster with their old team's hat on.
So either they're getting better with the site, or this decision has been in the works for awhile and the person(s) updating the site had a heads up.
Wow.
Anyway, totally did not expect this.
He's been enough of a Cubs presence to think of as someone who could get a pass for a crappy Spring.
But... 7 hits in 52 at bats, a .135 Average... plus Zagunis has been his usual contact self (.333) AND he's also cracked 4 dingers this Spring.
And if you're on the bench and have the hot hand, you're gonna play for Joe Maddon.
So really, I guess it's no surprise.
We all know that the Cubs GOTTA start off well.

And I really like this Happ kid, so hopefully this is nothing more than a re-centering of himself and he figures it out.