« The Day the Cubs' Derrek Lee broke his wrist. | Main | Finally. Lee Smith is a Hall of Famer. »

Brandon Morrow had minor elbow surgery a month ago. 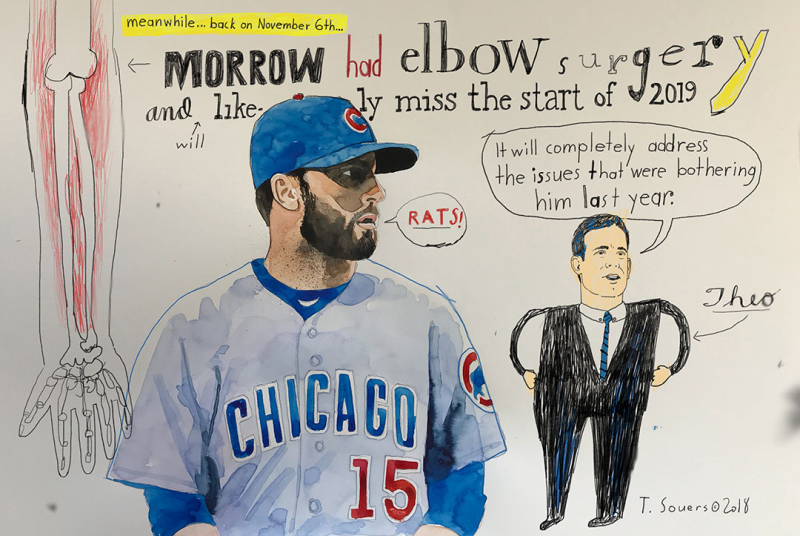 Back on November 1st, Brandon Morrow had "minor" elbow surgery.
Cleaned up some cartilage.
Interesting what "minor" means for a Cub who throws baseballs a hundred miles an hour.
They say he'll probably miss the early part of 2019.
Does that mean April? May?
May is a nightmare month with the Brewers, Cards, Phils, Nats, Reds and (I can't wait for this)... the Astros.
I expect that "early" next year is when there's going to be pressure up the wazoo for the Cubs, given the end of last year.
Nobody's gonna be allowed to say, "Chill man, it's only April."
They'll get called on the carpet, and it won't be pretty.
So Brandon... please heal as fast as you can.
We all learned what a loss in April can mean in October.
And to me, the bullpen is the headline this winter.
I am weary of people talking about Bryce Harper.
Yeah, that would be great, but it would be way greater to get some arms.
The Brewers pen... those guys go on the offensive rather than the defensive when they bring in their pen.
Pedro Strop is truly awesome, but really the only guy I feel "on the offensive" with is Carl Edwards Jr, and that's only been about 15% of the time with him.
Last year, I got to the point where if his first pitch was a ball I'd be screaming to get him out of there.
But I've also seen him be unhittable.
So... HEAL Morrow.
This is not "minor" at all, dude.

You heard about Luis Valbuena and Jose Castillo.
Horrible.
"...bandits place or throw objects on highways to force vehicles to stop or crash so they can rob the occupants."
I can't lose the pictures in my head of these guys digging through a car wreck to rob the dying.
Disgusting.
Awful.
And I'm so sorry for them, and I guess all the other people it's happened and will happen to.

I can't leave you with that.
Oh, so Paul Goldschmidt.
I'd do anything I could to get out of those gross Diamondback uniforms too.
Even if it meant going to the Cards.
He's supposed to be a fabulous guy and the former face of the Dbacks, this Mr. Goldschmidt.

I can't wait to hiss at him.

As of today the three best first basemen in MLB are playing in the NL Central:

I like all these guys. But I love #1...he's ours AND (based on age and contract terms) he's gonna be around here a LOT longer than those other two will be with their current teams!

And as to the Morrow "situation", we can just add that to the Darvish and Chatwood situations. I hope we'll be addressing our pitching situations at the upcoming winter meeting...