« Finally. Lee Smith is a Hall of Famer. | Main | The Cubs and Bryce Harper. What's a Hot Stove without a bunch of rumors? »

Blast from the past: Daniel Descalso. The newest Cub.

This post is from May 11, 2011.
The Cubs lost to the Cardinals 4 to 6 (box), Daniel Descalso was playing third, and played a big part in the Cardinal win.
I even call him a son of a b!tch.
It was Zambrano vs Carpenter, I was there with a camera.
Awesome times.
Anyway, to whatever the opposite of fanfare is, the Cubs signed Daniel Descalso (although supposedly the Cards were after him too, so THERE!)
They're also looking at Troy Tulowitzki along with 10 other teams.
Well... SOMEbody's gotta play 2nd until Addison Russell returns, or keep playing there if he doesn't.
Or something.
Lately, all the rumors for all the sexy trades don't have our favorite team attached.
And some rumors have teams like the one on the South Side talking with a "generational player" (you know who I mean) and... you don't want to even think about that.
So, I won't.
This hot stove seems like a hot mess right now, right?
But as a reminder of what it was like before Theo, read on...

If we have to watch Koyie Hill start behind the plate for the entire time it takes Geovanny Soto to recover from his strained groin, well...I'll do a really mean drawing!
How's about that, Cubs management?

During this, our season of meager expectations, I've been relatively content because I just like most of these guys.
But Koyie Hill is that guy who... if you look really close at his baseball card there is fine print at the bottom that reads:
*Do not expect this man to do anything right.

It was the first gorgeous Wrigley night of 2011, and I arrived just as the Cubs took the lead in the bottom of the 1st.
And while that was fantastic, it was also an inning where the Cubs left the maximum.
Chris Carpenter had given up 4 singles and 2 walks - he's one of those guys you want to get to early before he settles down - and he was clearly on the ropes.
And the bases are loaded as Koyie Hill walks up to the plate.
Of course, he swings at the first pitch.
The sound his bat made upon contact was a "doink", and the ball politely went about 95 feet into the waiting glove of a 3rd baseman named Daniel Descalso (Daniel would become a little more well known before the game ends).

In the 7th, Koyie would prove equally inept when he couldn't handle a fabulous Fukudome throw that woulda cut down...well here he is, on his knees looking for the ball he just dropped while Nick Punto scores. 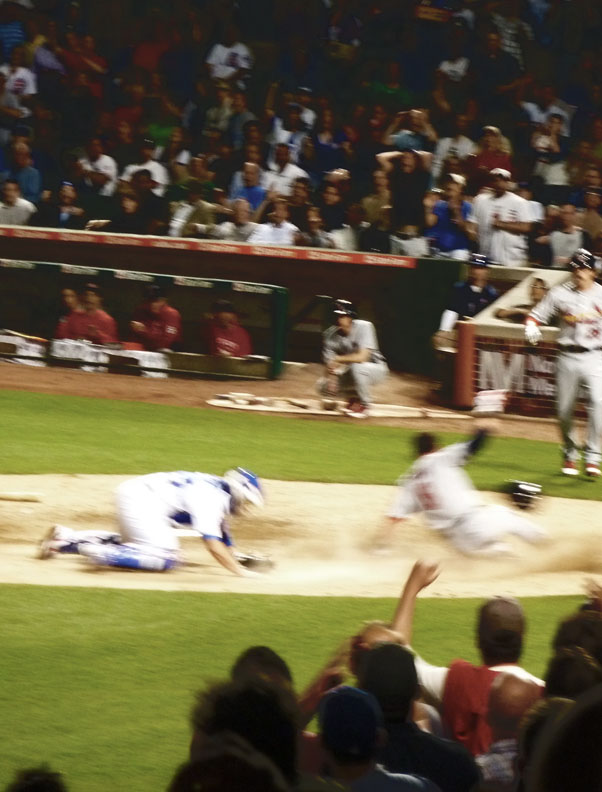 Bring me Welington Castillo.
Before the game starts tonight.

Anyway, you probably watched.
The Cubs tie it late and bring in Kerry Wood. Kerry's not on at all, Pujols singles, Holliday walks, Berkman flies out which moves the runners, Quade decides to load 'em and intentionally walks Molina, Punto makes out#2, and then that guy playing third I'd never heard of steps up to the plate.
And it felt really good because everybody was on their feet and it got loud and electric and it was Kerry and the defining moment of the game and that son of a bitch Daniel Descalso hit a single and ruined everything.
I mean, that place popped like a balloon, and in the 9th even though Carlos Pena was on base with Starlin Castro up and 2 outs, you knew nothin' was gonna happen. 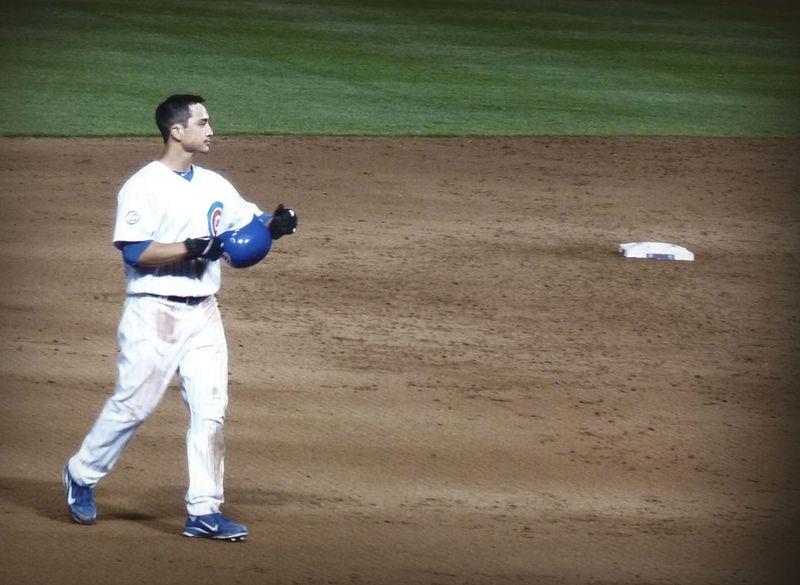 Darwin Barney, just another man left on base. 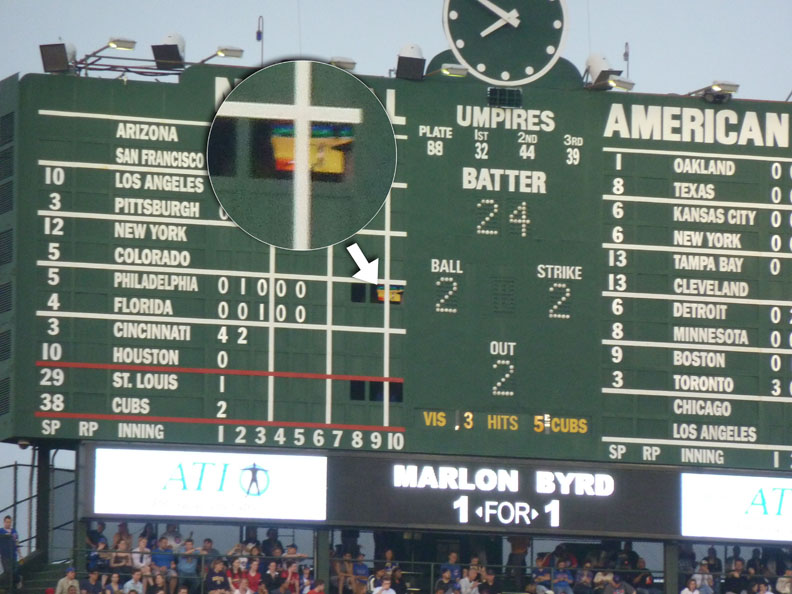 The guys in the scoreboard were watching the Bulls kick some Hawk bootay. 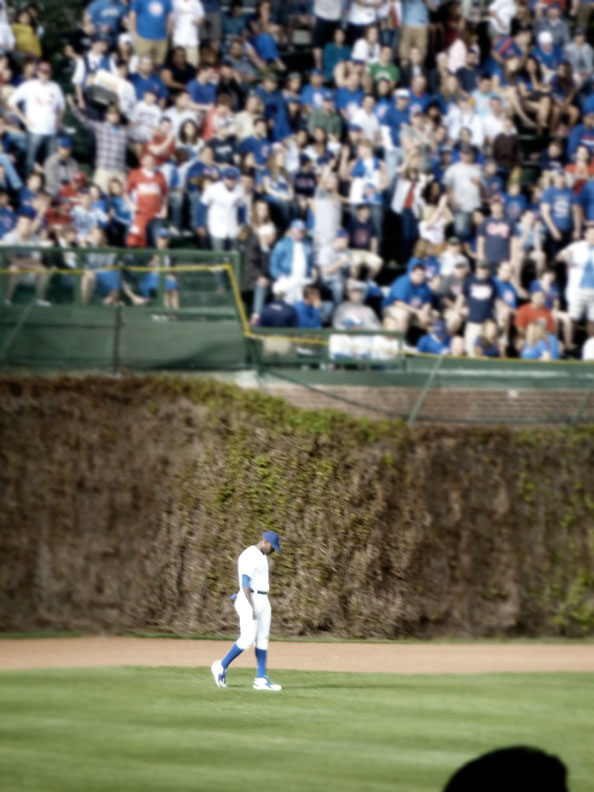 Alfonso Soriano made some of the best plays I'd ever seen him make. Unfortunately, he balanced them out with a couple bad ones and man, do people like to boo him. 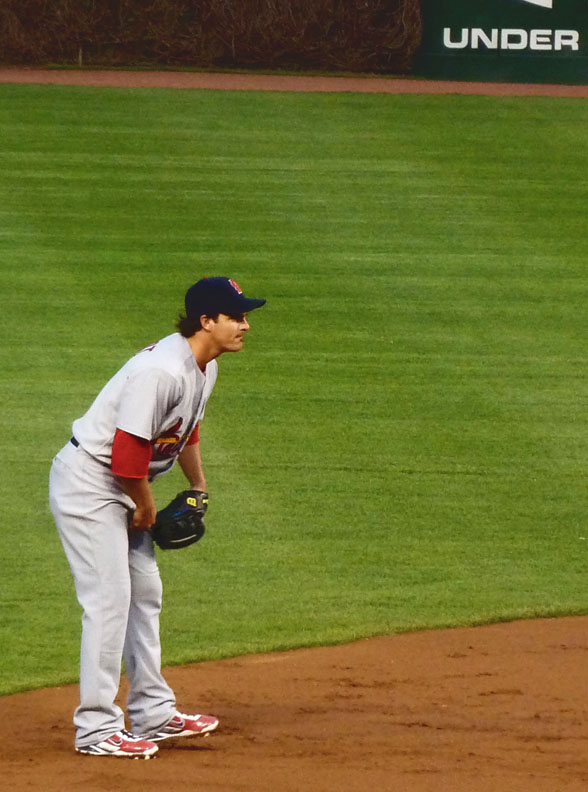 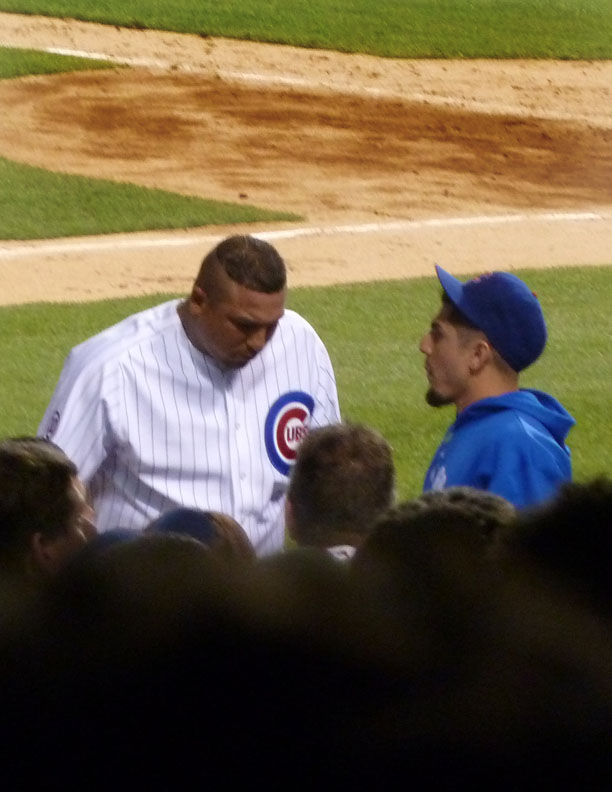 Poor Zambrano had some pretty awful D behind him. 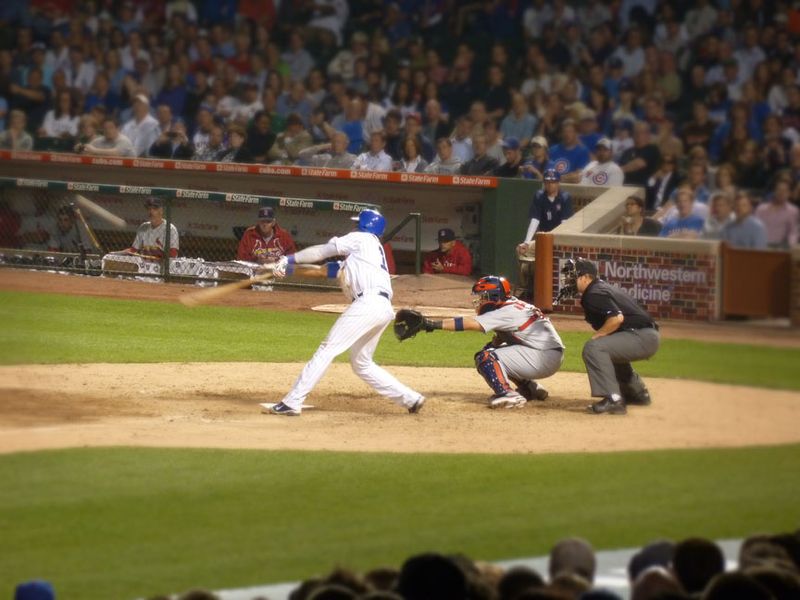 Starlin Castro's bloopy and fabulous single to right that scored the tying run. 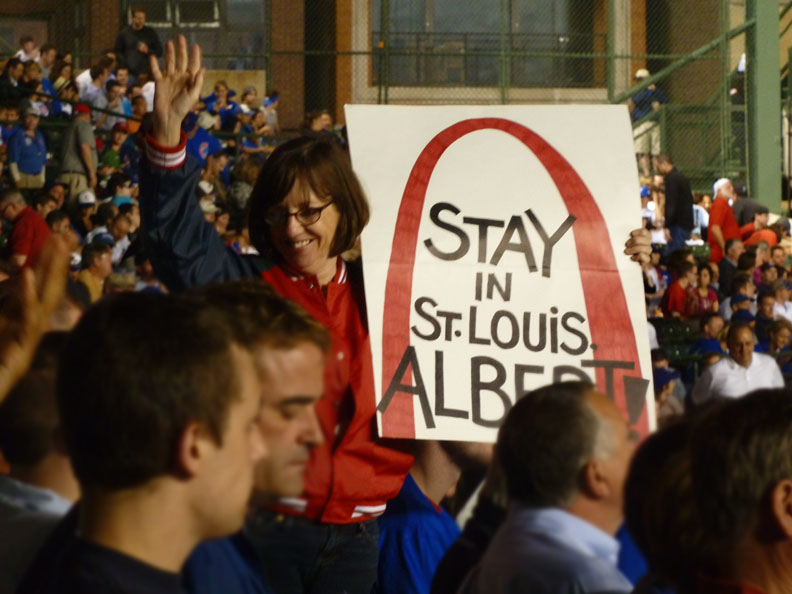 And as I watch aging Alfonso Soriano, this is a sign I could not agree more with.

Last thing, worthy opponent Tony LaRussa has some kind of shingles thing or something. Get well, Tony. You're one of my favorite guys to hiss at.

Remember when were overstocked with middle infielders? Starlin Castro? Gleyber Torres? (to name a few). Those were good times.

Remember when we had to live through the Sam Zell and Jim Hendry eras? Those were bad (VERY bad) times.

Remember when we got to listen to Ron Santo declaring "this is the year!!!"? Those were good times.

Remember when the sign on the building outside the right field wall said AC0770107? This were bad times.

Remember when the publication Vine Line was the best source Cubs news, information AND had the BEST editorial cartoonist in residence?

That was VERY good time!

HA!
Can't remember when I quit doing those illustrations.
What year was that anyway?
I love your yoyo list, Bud.
Up down, good bad...