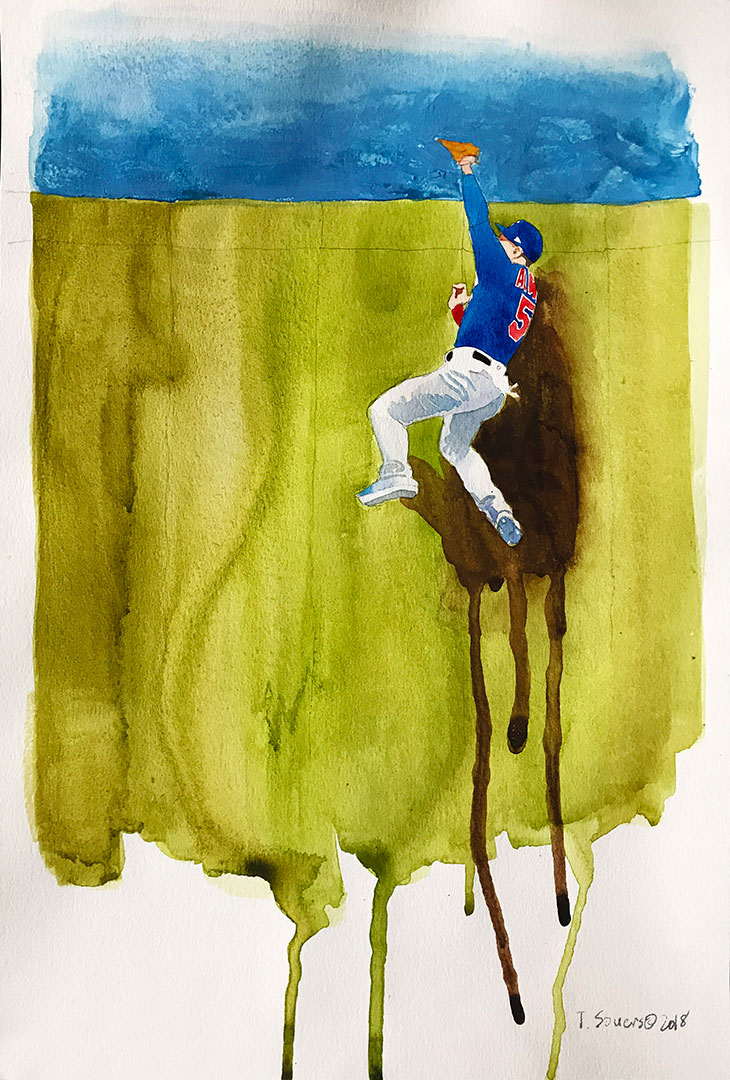 Man, if only Albert Almora were around on Sunday, maybe he coulda caught all this snow that fell in Chicago.

Among NL players with at least 425 plate appearances, he's 81st out of 98 in the OPS column.
So here's hoping the still young (he'll be 25 next April) Albert can... if he's never gonna hit homers maybe become a tad more Mark Grace-like and rack up some doubles.
In '95, Grace led the NL with 51 doubles (fun page of stats) so not that many, but you know.. more.

Okay, you heard Joe Maddon say... "I actually want to do less before the game talking to the media and whatever and try to get on the field more often."
And I guess that's fine but honestly, I love hearing the man talk.
But with another couple new coaches, Joe being more hands on is probably good (even if the coaches they're getting seem to be the same guys who were around the core kids when they were in the minors).

Lastly, I get to work early.
Park under the Aon Center, get coffee at the Soprafina, walk under Stetson and come up in the Prudential building, and out the revolving doors and across the street to the office.
This morning, I'm walking up to the revolving doors and on the other side of the glass out in the cold is Dave Wannstedt.
You can still hear him talking every weekend on Fox before whatever football game comes on, and he's got that distinct way of talking, right?
So he comes thru the revolving door and he's holding his phone sideways in front of his mouth, obviously on speaker, and he's telling a story I guess.
Anyway, just as I'm thinking about saying hi, he says into his phone, "Show she mushta took his shpot!"
And instead, I burst out laughing as he walked by.
I bet they were talking about shoveling out a car and saving a spot on the street.

Lastly lastly, Soprafina.
If you use their paper cup to get a medium coffee there, it's like $2.69 or something.
If you bring in your own travel mug (mine holds 2 cups of coffee) they call it a "refill" and charge you $1.25.
And if you have them stamp the little loyalty card, every 10th cup is free.
It's like the GREATEST deal, you do a little Earth love by not using paper cups, AND the coffee is awesome.

Addison Russell has been tendered a contract by the Cubs. So many opinions. So much condemnation and outrage.

My question to all those expressing those opinions is simple: what do you know? The fact is that, yes, Addison could be guilty of even more than anyone has revealed, far more than what some of his defenders may have imagined.

But if that's true, then the opposite possibility can also exist. He may be guilty of less.

To all of those either screaming in outrage on the one hand, or trying to portray Addison as unfairly accused on the other, I would say this:

"You don't have the facts. You'll just have to trust that those involved did and acted appropriately".

Try this for a hypothetical: If you were part of jury sitting in judgement of Addison Russell for the crime of domestic abuse and all you knew so far is what you know now, could you enter into deliberations and offer a verdict? Or would you say...we need more information?

Yep. I give up talking about it til there’s more.

Since we moved in this April, I'm finding the building to be a lot of fun. The Score live-broadcasting the Cubs postseason rally in the lobby this year was fun. I got Sandberg's autograph on a printout of game 7 World Series scorecard. :)

I’m in NY totally slammed on a shoot. Leo Burnett used to be in the Prudential when I worked there. The elevators used to SLAM shut. Like someone coulda died. I have a Sutcliffe story about that somewhere on the blog I’ll try to find.
And try that Soprafina coffee!! It’s a screaming deal!!

Oh man. That story totally cracked me up. Here Sutcliffe is trying to get on an elevator when suddenly a dude on the elevator yells at him, "NOOOOOOOO!" LOLOLOLOL Sutcliffe must have thought, "I'm not getting on the elevator with that crazy guy!"

Thank you for saving Sutcliffe.

And here, I didn't do anything to save Ryne Sandberg. Instead I stalked him at his radio show. Before the show he ducked into a room under the escalators. I found that odd. He was in there for a few minutes before the show. I thought it was some sort of private lobby waiting room. A couple weeks later, I explored under the escalators. They are washrooms! Ryno, I'm sorry I stalked you outside the bathroom door!

Well at least you had the good sense to not follow him all the way into the bathroom. That woulda been call the cops time...