For some reason, I don't like seeing digital readouts of how many days til Opeing Day.
And I'm terrible with calendars.
Some people can say, "Oh that second Monday in December is the 13th."
Not me.
But a steadily disappearing container of Q-tips is a nice, easy old-school countdown.
You could even glue a Cubs logo to the holder to add excitement.
By the way, it's actually 149 days til the opener, so be sure to take a couple Q-tips out before beginning.

Well, that team from Boston is pretty depressing with their 4-1 early WS Championship.
They're loaded.
I mean, it was kinda funny that the guy who rose to the top wasn't a star like Mookie Betts, but rather someone I'd see coming up to bat and think, "Oh it's THAT guy again."
Steve Pearce.
61 hits all season long.
Then 11 in October, with 4 of them being home runs of such importance that he gets elected to the Ben Zobrist club, the World Series EmveepeeZ.
My favorite part of the whole series was when the managers weren't trotting out 98 MPH reliever after 98 MPH reliever.
Because... the Cubs don't have anything close to that and I found it depressing.
Rumor is, teams are gonna start collecting these kinds of relievers, starters will go less long as they bring in the reserves.
It was so compelling and just... nice to watch Rich Hill's 6.1 innings, or David Price's 7 dominant innings.
Like baseball.

Luckily, we have Theo and Jed.
And they'll take stock of what they have, make the right assessments and fix it.
So many questions.
No idea about Addison Russell, but I don't expect him to be around.
Daniel Murphy?
Sure.
Which Cub that we love will be trade bait?
Happ? Schwarber? Almora?
How do you fix Carl Edwards - that guy has All-Star stuff if he stays healthy and harnesses it.
Will Jose Quintana just make us all angry when/if Eloy Jimenez starts banging the ball out of Comiskey (or whatever it is)?

Well, like I said: we have Theo and Jed.
So have confidence and count your Q-tips.
It's all gonna work out fine. 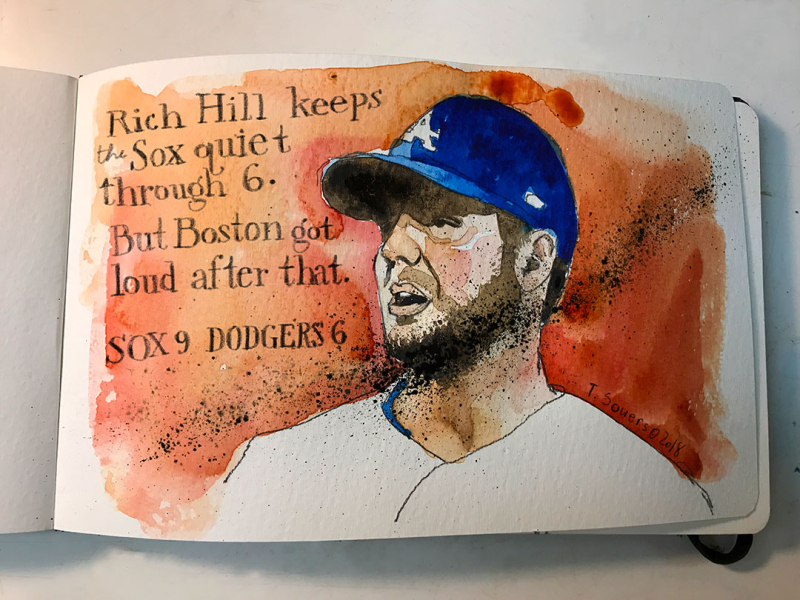 I started painting this sketch of Rich Hill when he was still in the game and the Dodgers were up 4 to nothin'.
I was pretty happy for the ex-Cub.
In the top of the 7th, he walked Xander Bogaerts and I thought Dave Roberts would come get him right then.
But he didn't, and Hill struck out Eduardo Nunez so... maybe another inning?
Nope.
Roberts pulled him and then... his bullpen failed badly.

Joey Cora had already been set up as the Bad Manager by leaving Eduardo Rodriguez, a reliever in an emergency start, in the game a pitch too long.
Ken Rosenthal popped up in one of the mini screens to tell us something like Rodriguez had only pitched (can't remember the exact number) like 70 something pitches in the entire playoffs, and tonight he'd thrown 93.
That was a cue for an angry mob to begin to crucify Cora, since Rodriguez' last pitch turned into the Yasiel Puig 3-run homer that give the Dodgers a 4-0 lead.

You're already aware of how Roberts is being raked over the coals for pulling Hill too early.
I swear... there ain't no upside to managing in the World Series sometimes.
It's a couple teams with gassed bullpens and one just out-did the other.
Had the Dodger bullpen kept the Red Sox from scoring 9 runs in the last 3 innings and won the game, Roberts would be the genius and Cora the goat.

Anyway, it sure was some enjoyable baseball viewing for awhile.
Grizzled old Rich Hill with those bags under his eyes... he was amazing and that would have been such a great story.
Had the Dodgers won, this Series would really be high alert stuff.
But tonight... it'll be Chris Sale vs Clayton Kershaw.
All of Los Angeles' hopes on the shoulders of one dude, and I can't help but think of the 2003 Cubs and Kerry Wood in game 7 of the NLCS.
It was the day after the Bartman game.
No matter what you think about the unfair treatment of Steve Bartman the fan, the fact on the field was the Cubs had just blown a game everybody thought they'd win.

Pretty sure that's how Dodger fans felt til Mitch Moreland hit the 3-run homer in the 7th last night.

In 2003, watching Kerry Wood warm up just before the game 7, he sailed a pitch 15 feet over Damian Miller's head.
You could just feel the thick Cub desperation like a heavy mist of sweaty syrup.
Good luck, Clayton Kershaw.
But I think this one's over.

An 18 inning World Series game with the Dodgers beating the Red Sox 3-2.
I got an alert on my phone that said "Instant Classic!"
Maybe it's because I really can't muster any emotion for either team except anger ("BELLINGER YOU IDIOT!"), but everybody knows the Real Classic happened in 2016.

I lasted thru the 12th after watching Enrique Hernandez, Joc Pederson and Justin Turner go 1-2-3.
That kid Walker Buehler sure was awesome.
7 innings in his first World Series performance.
2 hits, 7 Ks, no walks.
He turned 24 two months ago.
That's just so cool.

Anyway, I just tried to post a laugh for you.
Otherwise slammed from work.

Sox up 2 Ws to the Dodgers' 1.
Honestly, I thought we were looking at a sweep.
Last night made it a little more interesting...

Sorry.
Yesterday I got so wrapped up in travel times that I got the cities backwards.
The Series opens tonight at Fenway with Chris Sale facing Clayton Kershaw in the opposite of a Subway Series.
This is more like the Jet Lag Series.
But...
Who cares?
I've been hearing this in hallways and elevators and waiting in line for Baja Chicken Tacos at Burrito Beach.
Weird.
It's like people around here cared more about a World Series With Other Teams before the Cubs won it.
Listening to sports talk radio, the Bears (as expected) are a FAR more popular topic.
Anyway, I assumed the Red Sox were way favored to win, but I googled "who's supposed to win the World Series" and the top story said... Houston.
Haha.
Of all the post season results, the fact that Houston lost makes me the most happy with the Dallas Keuchel "We're not the Cubs" World Series hangover quote.
Plus just a general dislike for the Astros for... ever basically.

Anyway, all the games start about 7 for us centrally located folks - it couldn't be more convenient to watch.
I'll be watching to see if Kershaw is serious about breaking his post season blues.
You know how you automatically dislike players on other teams but if you think about them as a player on your team, well... it changes everything?
Like when Dennis Rodman, who I despised as a Piston, became a Bull... he became likable (no comment on since then).
With Kershaw, it's different.
I actually like him even as a Dodger.
So I'm pulling for the Dodgers tonight, and I guess I will throughout because the NL thing and the fact that Boston is just sooo good.
Wonder who Theo's pulling for?

Okay, here's a finished David Bote, and enjoy the Series. 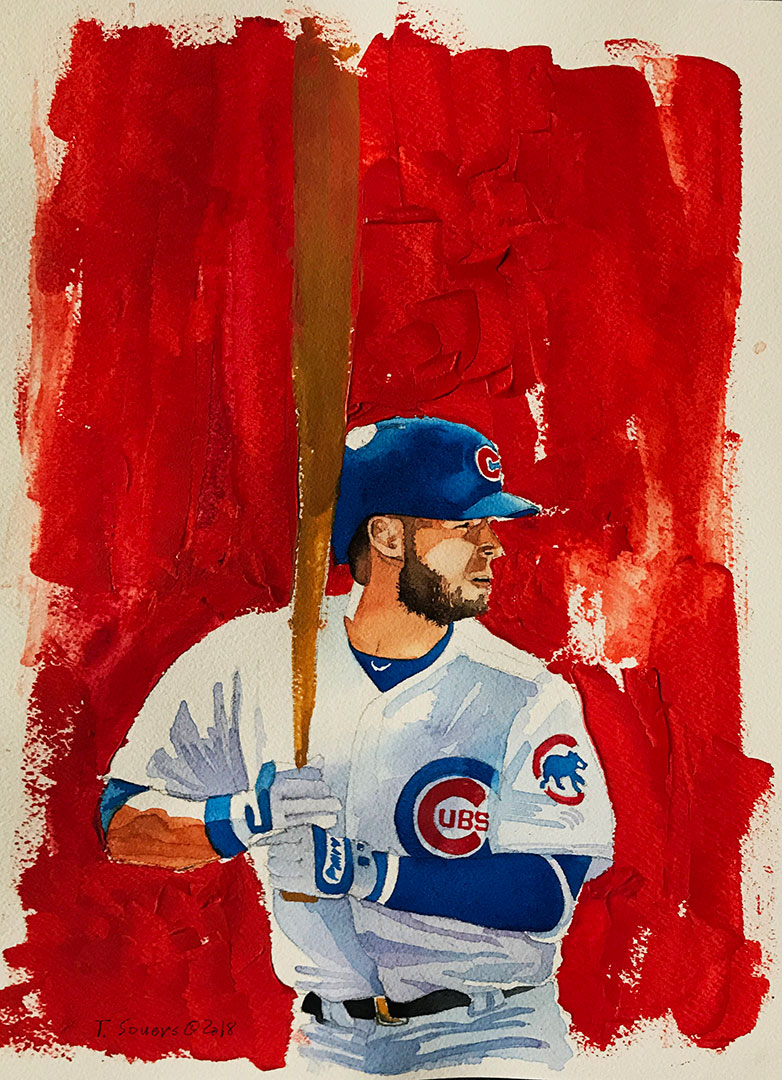 Did Counsell outsmart himself?

I don't usually call out a manager.
They always know more than I do.
They're also in the moment on the field, and I'm watching slow motion replays with a cold beer.
But when Craig Counsell brought in Josh Hader so soon?

Any of you play video games?
I do, barely.
Games I play really don't take any strategy - lately I've been teaming up with Wyatt killing zombies as they run at us.
But like baseball, there are games that take strategy.
Have you seen the hilarious video of Leeroy Jenkins?
You'll see a bunch of the game's warriors (avatars) standing around, each controlled by the actual player.
The players are probably all in different houses around the country, they've made a special time to get "together" online to play this game.
And they've each got headsets on so they can hear each other talk.
So they're discussing strategy in the beginning.
And out of nowhere Leeroy just takes off and... starts the battle early.
It happens about 1:24 into the video. But watch at least a little before and after because the dialogue (some profanity) is priceless.


Anyway, I thought about this video when Counsell pinch hit Schoop for Chachin, which meant Hader was coming in.
Yes Chachin had just given up the 2-run homer to Bellinger and the double to Puig.
But then he stopped it with 3 outs in a row, which is what starting pitchers do.
Chachin was also the guy who, the last time we saw him, allowed one hit vs the Cubs in his 5.2 innings - the homer by Rizzo.

After Puig's bomb, I got a text from my buddy Sutter that said, "Counsell outsmarted himself."

I mean, you never know what would have happened had Counsell saved Hader for later, but the move just seemed to let a bunch of air out of the Brewer balloon.
I just... never heard anybody say, "Sometimes you win it in the 3rd."

Oh well, now it's a Dodgers vs Red Sox World Series.
I wish I could get the airline miles that will accumulate between these teams.
I can't imagine what that kind of travel will be like.
Every game is a night game, starting Tues and Wednesday night.
First pitch is 5:09 in Los Angeles, which is 8:09 in Boston.
Say the game goes 4 hours (it will), so finished around 9.
No idea really how long to shower and get to airport, but let's say that's 2 hours.
11 you're boarding, it's a 5 1/2 hour flight to Boston so you're landing at 6:30 which is actually 9:30 in Boston on Thursday morning.
Yeah hopefully they slept on the plane and they get Thursday night off.
But I'm just saying this travel will be equal to, or maybe even the worst for any World Series.

Okay, this will be interesting.
Go Baseball!

Oh, and I'm working on a David Bote painting... 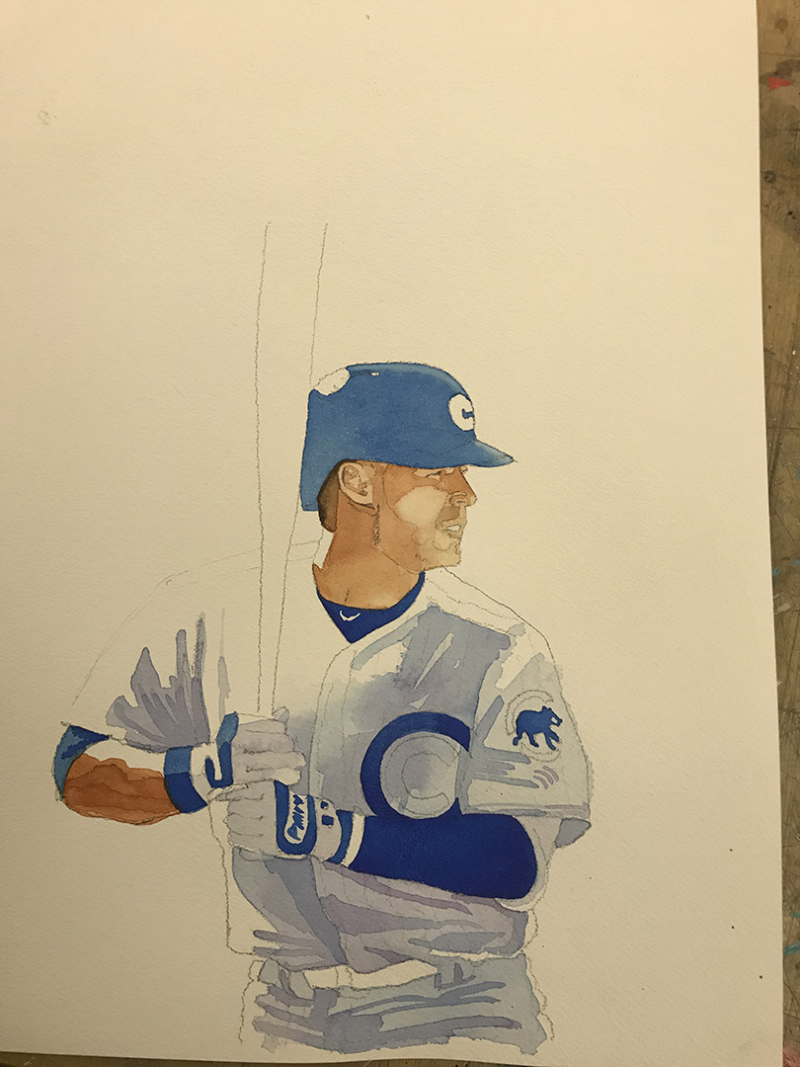 Counsell pulls a fast one, but Dodgers win 5-2.

Hi.
Well, this is actually kind of an awesome series, this NLCS.
When I first heard (on the radio at work) that Craig Counsell pulled starter Wade Miley after just a couple pitches, I was at a loss.
That woulda been really bad luck on the heels of the Gio Gonzales news if Miley was injured as well.
But then... it turned out to be Counsell just being Mr. Tricky guy.
So at first I was like... that's pretty underhanded, man.
But I guess, um, whatever you need to do to feel like you got the upper hand.

It's kind of fun to watch baseball for just the joy of it rather than being an emotional wreck.
I'm so much calmer and not screaming at the tube.
It's nice.
Wait...
NO IT ISN'T!
I'D RATHER BE OUT OF MY MIND SWEATING OVER EVERY PITCH AND WORRYING IF... LIKE... IF I CROSS MY LEGS DID THAT MAKE HAPP DROP THAT BALL???!!