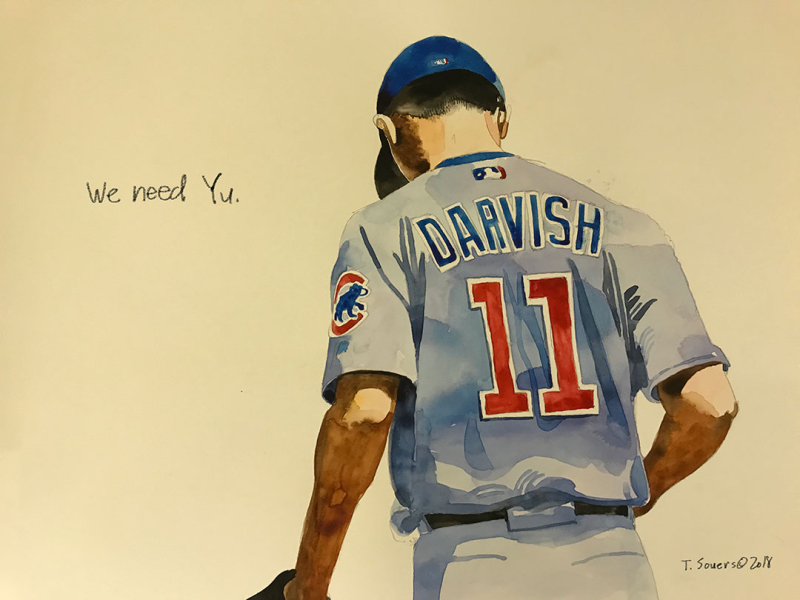 This is my grown-up response to Alex Rodriguez' weird spouting off about Yu Darvish to put himself in the spotlight.
Actually, I hate playing into his hands by even doing this, but...
Whatever.
Social.
Here's part of what he said (from Cubs.com): ""A guy, to start a six-year contract with three of the worst months that you can ever see … They won't say this publicly, but it's gotten so bad. They've let him basically place and take control of his rehab, which is scary, because they don't want to create anything that he can kind of push back against. He'll let the team know when he's ready -- which, let me tell you what that means to a clubhouse, you lose respect quickly."

That last part stands out, doesn't it?
"Lose respect quickly."
From a cheater in baseball and in life.
Really?
it's almost too easy to rip the guy - just google "A-Rod cheats" and see page after page of headlines.

Don't know why it cracked me up so much, but one day I said to my brother, "HEY, why don't you just take a little ride on the douche train."
It coincided with A-Rod being a douche, so I drew this douche-ey gif because he's such a douche-ey douche.

Okay, enough of that.
Lotta rumors flying around today, with Theo and Jed perhaps trying to snag a little more pitching.
I don't know what the Cubs have to offer, but it'll break my heart if Ian Happ is bait and David Bote's excellent play has made him that way.
It'll break my heart if David Bote is bait.
It'll just break my heart whoever it is because I'm so attached to this team and watching them grow.
And I think I already saw Happ come up, get hot, get figured out, and then adjust.
That's two kindsa skills coming from him - the inner ability and the ability to be coached.
Rare.
I mean, I get it and for sure we'll see guys go.
I think if the players on the Cubs were paid now what they're gonna get paid later, they'd probably be the most expensive team in history.
Impossible to keep them all, right?
So yes, I must manage my own self and what is inevitable, and maybe somebody goes now.

And by the way, I also believe that Yu Darvish is going to be a huge part of this team before this season's over.
And I'll pull for him every single day.

Alright, now onto Pittsburgh and the Next Thing.
Beating the Pirates, who just got better with the trade for Texas closer Keone Kela.
They're gunning for the Cubs and Brewers, those Pirates, and the Cubs play them 10 more times after going 5-4 against them so far.
Be nice to end this evening 6-4.

Yes, ARoid is such the beacon of integrity. Who'd a thunk we'd be more concerned about Pittsburgh than St Looie. But....Let's Go Cubs! I hope we don't trade Bote or Happ. Every year is different, we just need to go on a tear for about a month or so and steamroll into the postseason.....If we get anything out of Yu it's a bonus this year, but I'm putting out the good karma for him.

Cards trade Pham for prospects...
It's weird seeing these kinds of headlines come out of St. Louis.
I think Yu's gonna be a nice big boost when he comes back.
(And don't forget about Smyly.)
For the playoffs, Cubs will need that.

Lessons we all should know by now. You gotta put your brain in gear before you open your mouth (or your Twitter account).

That's a good message for A-Rod. Here's a couple more:

I remember being told once that when you compose an angry memo or reply to an E-mail you should let it sit for 24 hrs. before you hit "send". I always did. And most of the time it never got sent.

When these athletes sign their first contract, they should be required to hear a presentation about foot-in-mouth disease. Sometimes the only time a guy takes his foot out of his mouth is put the other foot in!

Old saying: "It's better to remain silent and be thought a fool than to speak and to remove all doubt." - Abraham Lincoln

HAHAHAHAHA!
Never heard that one from Mr. Lincoln!
And I totally do the waiting period before hitting send.
Maybe not 24 hours, but still...
Great advice.

Going to the game tonight with some friends. This is the game we chose after our June 18th game was postponed because of rain. Now we get to deal with the peace march heading to Wrigley. How's that for luck?

Ugh..I don't know why ESPN lets ARoid on the air sometimes. The dude has diarrhea of the mouth (and constipation of the brain). If it were just Rossy and Mendoza calling games for ESPN, I might actually watch them.

Yeah. Love the other two.