Cubs take series vs. Cards. What a game Sunday.

We'd just driven in thru the rain, parked and, walking down Waveland towards Clark... it was like somebody turned on a gigantic fan. 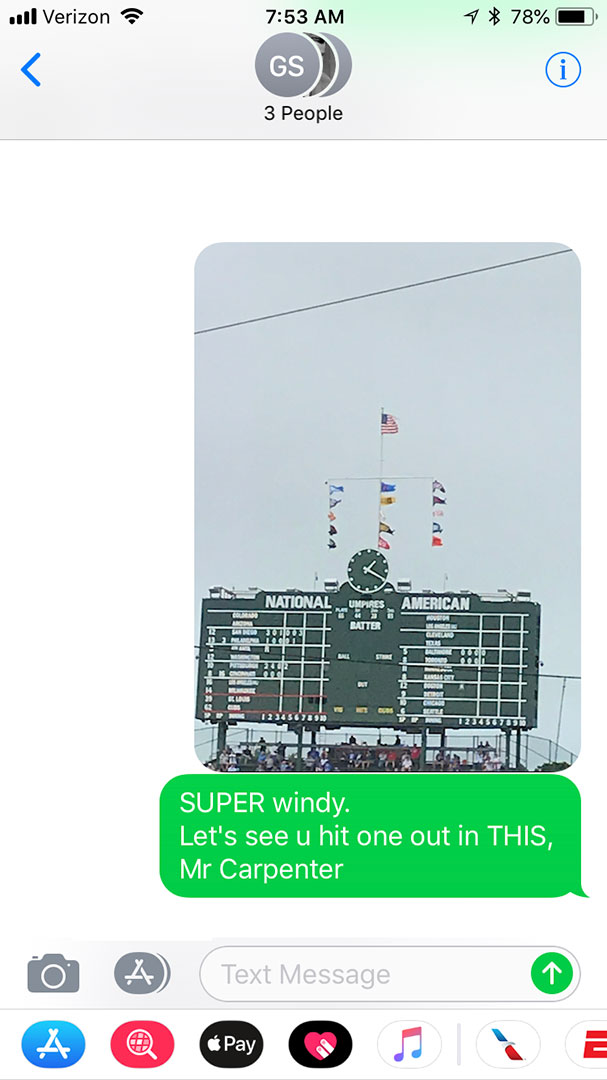 When we sat down, I texted this to my Cub Fan friends.
Seriously, NOBODY could hit one out in this wind, not even the super/mega/uber hot Matt Carpenter.
So I kinda laughed when he bunted for a single to lead off the game against the shift.
Then... it wasn't so funny when he crossed the plate a couple minutes later.
Today was gonna be small ball and the Cards just showed how to do it.
The Cubs go 3 up 3 down, and by the end of 2 innings it looked like Mikolas had it going on while Quintana was just working sooo sloooow he may never find a rhythm.

In the 4th the Cards score another when Dexter Fowler, wearing striped red/white socks with red hi-tops that had actual working lights on the heels, scored from first on a Yairo Munoz double.
But then Ian Happ hit a shot to the foul-line side of Carpenter at first and Jason Heyward came around just like Fowler, only Happ's hit was a double.
Then Contreras knocked in Happ and we're tied.
Nice.

In the bottom of the 6th the Cards had Mayers on the mound and up comes Kyle Schwarber.
Honestly, he hadn't looked that great in his first couple at bats and you wondered... oh no I hope hitting 55 long balls in one night didn't so something wonky to his swi... and then he hit a ball that rocketed so fast off his bat I never saw it against the gray sky at all.
So yeah, NOBODY could hit one out in that wind... except Kyle Schwarber.
Wrecked my vocal chords on that one.

The Cubs scored another in the 7th, but it was the 8th where somebody yanked the lawn mower cord of the Big Blue Machine and the Cubs just went crazy.
2 walks + 4 singles = 3 more runs and snuffed any spark the Cards had left.
Save to Rosario, Cubs win 7-2 and take the 3rd W in a 5 gamer.
And while that was happening, the Brewers were busy putting up 2 runs in Los Angeles... to the Dodgers 11.
Smeared 'em.
Even more odd?
The Red Hot Pirates won the 9th of their last 10 and PASSED the now 4th-place Cardinals.
Wow.

Today it's Luke Farrell vs the Diamondbacks.
Lots of headlines about Theo needing to do something to shore up the pitching.
I don't disagree, but also I think Darvish will come back and be forceful, and Drew Smyly is on his way back to the bigs.
The bigger problem on the staff is the health of Brandon Morrow.
Because I think the Cubs have been treating him with kid gloves in anticipation of using him sort of like they did Chapman in '16.
If he's really got health issues, then closer is where I'm more concerned.

Oh wait, I forgot about Quintana.
A total stud performance going 7 innings the day after a pen-shortening double header.
Joe let him throw 121 pitches and yeah I know, but sometimes you gotta let a guy go when he's going good and you need it. 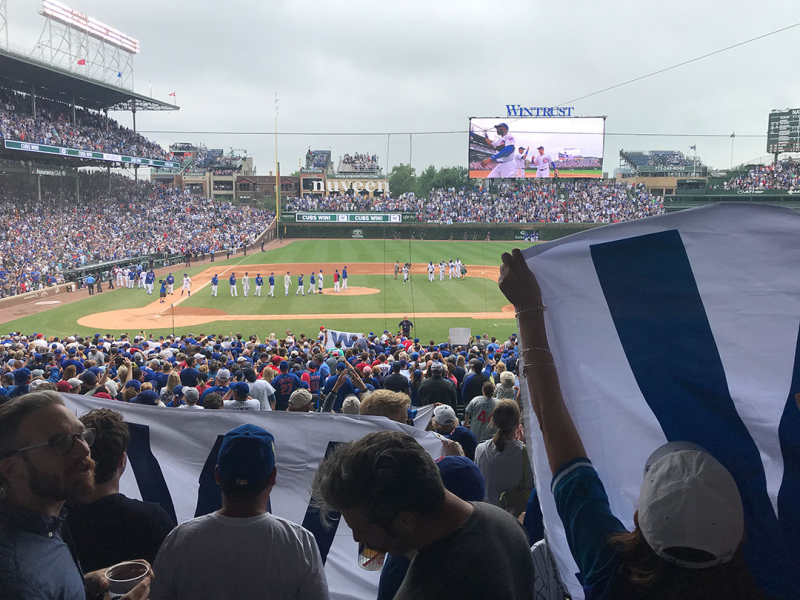 "...8th where somebody yanked the lawn mower cord of the Big Blue Machine and the Cubs just went crazy."

This made me literally LOL. Better half and I have a joke whenever Bryant and Rizzo do something completely insane, one after the other, that's "behold the power of this fully operational Bryzzo!" Well, the Bryzzo may not be fully operational at the moment, but it is at least on and warming up.

Q has been more Quinsistent lately at least. Even Chatwood wasn't completely and utterly horrible, somehow.

I'm loving this season! I totally trust Theo (and the money guys) to solve the pitching issues. Meanwhile, because I like stats, I created a 5-team NLC division consisting of the last 5 Cubs teams after 98 games:

Just look at what we've accomplished over a 5 year period (and be thankful!). Our 2018 Cubs are neck and neck with our 2016 World Series Champions!

There was a glimmer of hope in the Chatwood start.
Still the walks, but...
That 8th inning was a nonstop yell fest.
I forgot the toll it takes since I hadn't seen something like that live in a long time.
Gorgeous!!!

I hear the D-Backs have that problem, which isn't surprising.
The entire time I lived there, 7 years, I only met one person who was actually from the state.
One.
Bud thanks for that fantastic graphic.
We are good!