Of course I couldn't be there for the Sunday night game, the lone goodie.
But still, it's a good time in St. Louis even with the rotten outcome of Saturday's immediate punch in the gut grand slam game where the Cubs lost 2-6.
And a particularly difficult day for young Ian Happ, stationed at 3rd with Kris Bryant on the DL.
Even though there were no errors, I bet there were a number of plays Happ would like to do over.
Like the first bunt to open the game.
What woulda happened had Happ fielded that cleanly?
How would that have affected the rest of the disaster of the first inning if Carpenter's out?
A ball off the glove on a liner and then, can't remember who hit it but someone smashed a grounder that played Happ and my Belleville friends all said what a tough day that kid was having.
All the plays were extremely difficult and not saying Bryant would have made them, or anybody for that matter.
Just a tough day. 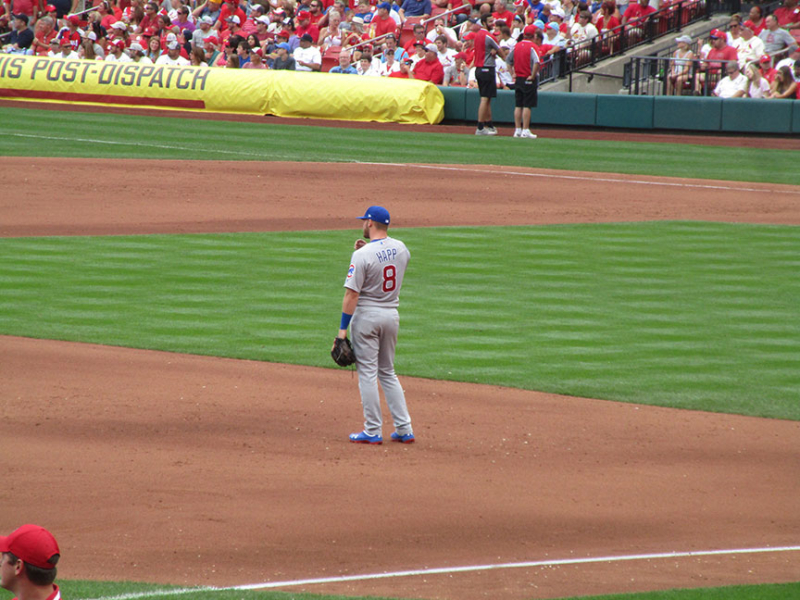 And maybe I just get too used to how good the Cubs D is and my expectations bigger.
The would-be beneficiary of those would have been Jose Quintana, who desperately needed help.
Here he is after walking Martinez in the first with the bases loaded - Cards 1 Cubs nothin'. 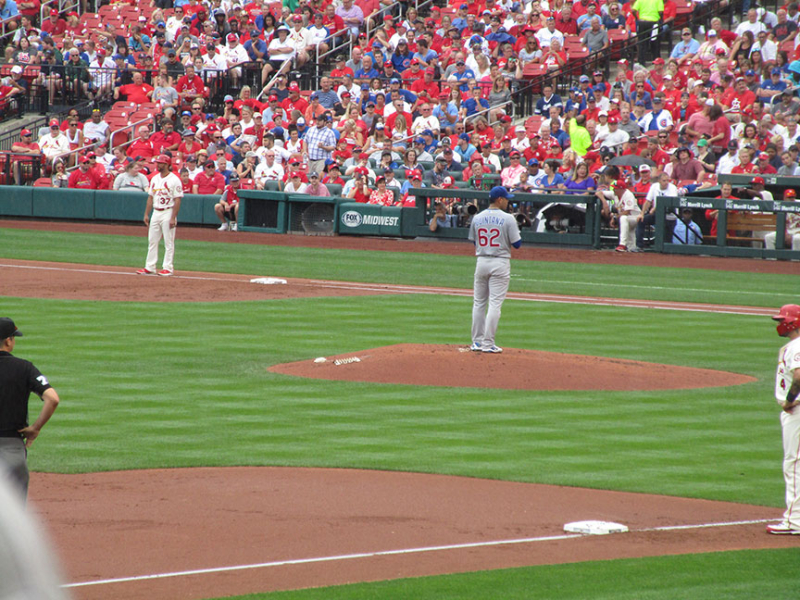 Then the massive Ozuna bomb and man, you sure do feel lonely in the sea of red at Busch.
Later, it looked like I'd at least get a t-shirt out of the deal but it slingshotted over my head. 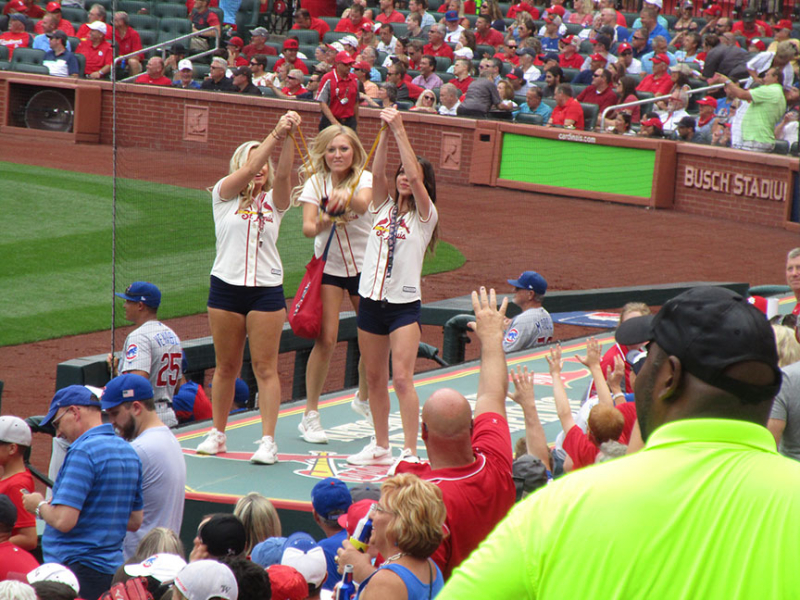 But it was still good seeing all my old high school buds, and if you're in St. Louis you should definitely stop by the Peacemaker for some fresh seafood.
It's called "Peacemaker" because... well this from the website: "Our namesake Peacemaker poorboy dates back to the 1800s when husbands offered the fried oyster sandwich to their angry wives as a peace offering when coming home late."
My buddy John's son is a chef there. 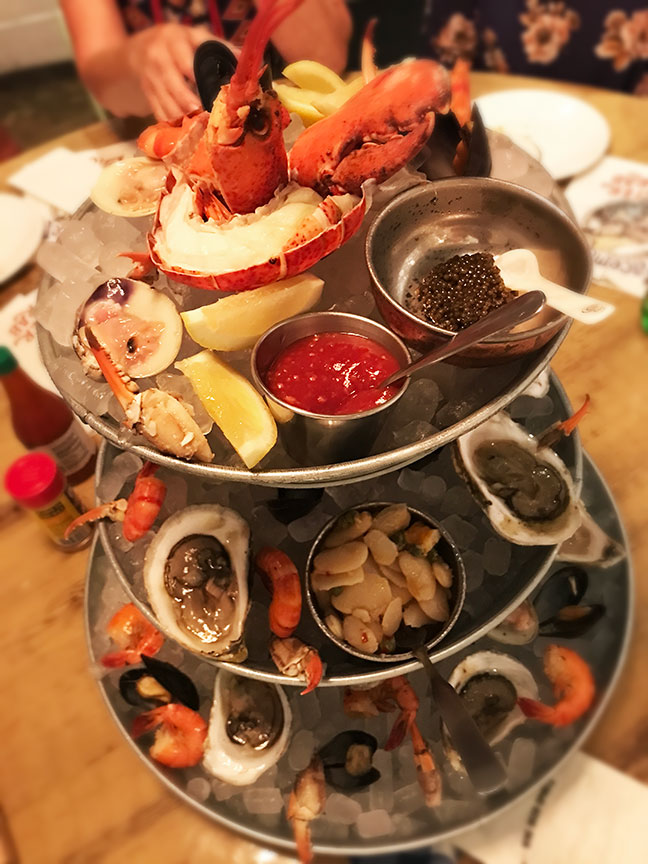 Amazing.
Before the game we went to the Broadway again, loud music, great food and plenty of fans for both teams. 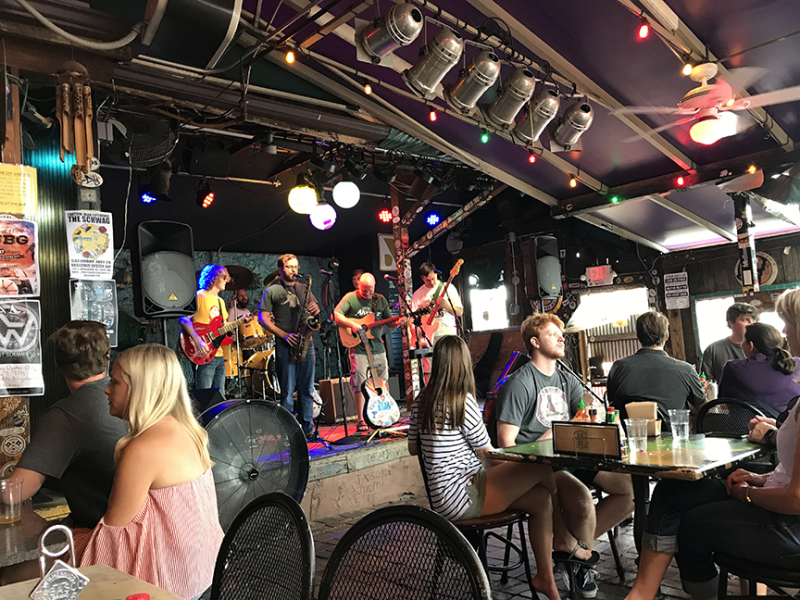 But then that first inning...

Oh well, last night at least Kyle Hendricks came thru with a huge 7 innings of excellence despite another 1st inning bomb.
And Ben Zobrist with 4 hits as he and Rizzo both hit homers in the 5-2 win.
(After driving thru a massive rainstorm almost all the way back from St. Louis, I fell asleep in the 2nd.)

After the day off today, it doesn't get any easier with the Pirates.
They went on the big Cardinal-passing-in-the-standings tear and even with a couple recent losses seem pretty hot.
Lester Tuesday and we'll get to see Cole Hamels on Wednesday.
Looking forward to that.

Well Tim, you and I both have seen the Cubs lose to the Cards on a Saturday in Buschhhhh. I was up there May 5 when Ferrell gave up his first of 2 walkoffs. Oh well, I was up there with my Sigma Pi brothers and the company was fantastic, regardless of the outcome. Last night, great game by Hendricks (after the 1st) Rizzo with a dinger. And Benzo! 4-4....Strange 2 game series vs the Bucs. Trade deadline tomorrow. I wonder what Theo has for us?Did you guzzle a Buschhhhh Light at the game?

ERIC!
Yeah that's kinda painful, being that guy with the blue hat on in St. Louis when bad stuff happens.
But oh well, that's the chance you take and I'll happily take it again.
I hope there's nothing more wrong with Morrow than they're saying.
If there is, we'll surely see something happen tomorrow.
I'm pretty bad about anything "light", btw.
But I will say there is amazing beer and a passion you can see with the folks down there about their local product.
Delish!