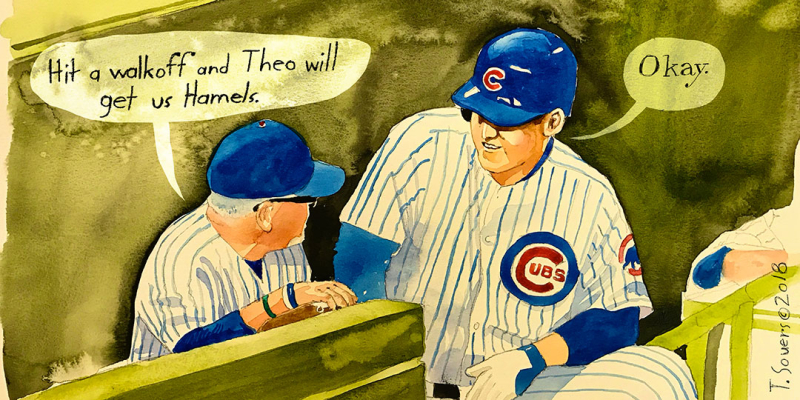 Well, I'm hosed.
I got up early and spent a couple hours writing this post and when I hit "publish", my blog provider decided that would be a good time to ask for my password.
Then it returned me to a blank page.
So I lost all I wrote, and now I have to get in the car and drive, and I don't have time to reconstruct the whole thing.
I'm so angry right now I can hardly type.
Anyway, I apologize.
Because yesterday was just so huge.
I described how I found out about the 9th inning with Bote and Rizzo's back to back homers at work, where it's no longer offices but rather a giant room with big tables so everybody can hear so I had to keep it together and not yell as loud as I normally would given the impossibly cool Cub Outcome but instead did a half whispered fake crowd noise like when I was little so as not to have management potentially frown at me or ruin another creative's train of thought.
A giant chunk devoted to El Mago and his magic at bat with Schwarber on 3rd and Baez striking out only the pitch magically being wild so Schwarber magically scored and El Mago magically appeared on first
There was a bit about Rizzo being the Italian beef eating spiritual leader of our favorite team, and then I went deep (for me) about young 25 year old Bote.
And how I couldn't remember an 18th round draft pick signed for $100 grand ever getting a curtain call in just his 21st game.
And something about when thinking about all that happened yesterday, it was really like the Baseball Gods came to Wrigley for a little visit, sprinkled some dinger dust and then went to Theo's for coffee.
Because that's where the next bit of magic happened - with Theo.
And how, after all the glow of the walk off Rizzo homer I was momentarily in good/bad from the alert on my phone saying the Cubs had acquired Cole Hamels.
Because while I was excited, I was also afraid I'd read the name "David Bote" at the bottom of the alert as part of the part the Cubs gave up.
But instead it said, "some minor leaguers".
WOOOO!
And finally I borrowed from Pat Hughes, saying that even though this season has already been amazing, yesterday may have been a turning point.

And now, I GOTTA GO TO ST. LOUIS IN MY CUBS HAT!
See you Monday.

Oh yeah, here's the Kelly Crull tweet showing Bote's amazing glove, I think I said "flash forwarding leather" and that it was SO FUNNY.
Honest.
You should just go ahead and laugh right now anyway because if you could read what I had earlier, you'd be in stitches.

You have to believe that anyone who visits Cubby-Blue has already seen that magical 9th inning (many times).

But I had to watch it on FSAZ here in AZ. And I got to hear Bob Brenly (ex-Cubs now D-Backs announcer) instantly converted from happy - chirpy "how much fun it is to beat the Cubs on a beautiful day at Wrigley" to "well there goes the ballgame" doldrums.

Here it is again (this time with the ecstatic Cubs TV and radio broadcast team). This one is a keeper:

Can we do it again for you tonight Tim???

Hi Bud.
Went to the Saturday game.
Love this story, tho!!!
I like Brenly, always have, but this was just soooo sweet.