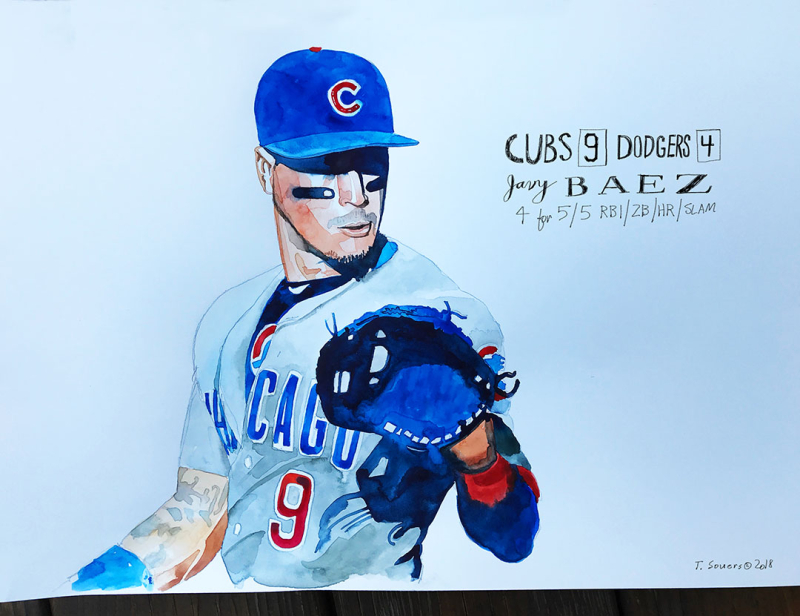 When you were little, and when I was little, there was a kid.
Probably not as talented as Javy Baez, but still there was a kid, somewhere in your kid universe, who was just better than everybody at everything.
That kid was the one who said "Gimme the ball" and everybody in your kid universe said "Okay".
The one who played all the sports including baseball, which happens during track season, so the track coach had to beg him (and got him) to run the hundred during state competition.
Or maybe the triple jump.
So of course I'm biased, but we may be looking at that kid right now, only his kid universe actually is the universe universe.
A single, double, homer and grand salami.
5 runs batted in.
On the same day Kris Bryant goes on the DL and the level of despair in the head's of Cub Fans was up to eleven, Javier Baez saved the day.
Not only with his bat, and not only with his glove, but with his head.
Did you see The Double Play?
With Cody Bellinger on third, Puig hits a ball to Baez who's playing there because Bryant's shoulder.
He throws home, Bellinger's now in a rundown, Contreras runs Bellinger almost all the way back to third before tossing to Baez who tags him out.
While that's happening, Puig is going to first and Javy sees that he rounded towards second.
So like... it's almost not fair.
It's National Geographic footage.
Puig is the fly on the branch and Baez is that chameleon who's tongue comes out of nowhere and makes the fly disappear.
So far, my favorite play of 2018.
And if you've been a Cub Fan for as long as I have, there is not a single past Cub you can think of and say, "Yeah, Baez reminds me of that guy."
Before he's done, we may say that about any player ever.

I fell asleep.
I bet you do this too.
I fell asleep in bed and my phone is on the nightstand.
And I wake up at 3AM and immediately put on my glasses and reach for the phone and turn it on and it's so bright I can't see anything for a couple minutes.
And then I can make out the score, and then I see there are videos to watch, and then I stay awake til about 5 because who can sleep after that so I give up and get up.
It's a beautiful day even with the thick layer of gray outside.

And you.
You should feel great today.
Enjoy it.

ps: the painting - inspired by "Gimme the ball."

Cubs Theo and Jed must be talking about pitching help, right? ;)

Well, for my own sanity I expected a loss last night.
After the 41 Underwood pitches in the first, I thought that poor kid was gonna implode.
But did you see the laugh he shared with Jimenez walking off after that?
Took that as a good sign.
Then he gave up the dinger but overall, that was not a bad performance at all.
Too bad for the L.
And too bad for Justin Wilson - people are actively looking for Cub targets right now and he's not helping himself.
I feel horrible for the guy.
Anyway, I tried to make a funny above.
And tonight, for my own sanity, I expect a huge win with Jon Lester on the mound.

Cub Fan Angst. One little W in Cinci can make it go away.

You're in a futuristic movie based on a video game.
An impossibly muscled giant with giant strings of saliva dripping off his giant teeth just shot you with a crossbow from 100 yards away.
It hurts bad, and there's blood everywhere.
What are you gonna do?
Lay down and die?
Or pull that arrow back out and put it in your own crossbow and shoot that guy back?

I promise you I'm filled with as much angst as you are.
3 losses to the Reds in a row?
H U R L !
Pitchers going to and from the DL and Iowa like mad.
Heroes dinged up and ineffective with the bats.
The ups and downs of this Cubs team may be defining them.
Scream if you want.
Run 10 miles.
Give yourself a pedicure.
Get through this downward spiral any way you can.
It'll start going back up sometime soon.

Won't be easy.
After this 4 game Cincinnati trip, the Cubs'll get on a plane.
Fly to Los Angeles and play tomorrow at 7, but their bodies will think it's 9.
And just as they'll feel normal about the time there, they'll get back on a plane and come here, play the Twins.
Get a day off that Monday.

Mike Montgomery is on the mound today because Tyler Chatwood's wife is having a baby - their first.
He'll be gone 1-3 days, and good for the Chatwoods.
So the Cubs sent Luke Farrell to Iowa, Rob Zastrynzy to the DL (where he'll figuratively hang out with Carl Edwards Jr and Yu Darvish), Chatwood to maternity leave, brought back Cory Mazzoni and Justin Hancock.
It's also possible that Jon Lester won't pitch Monday because he needs the rest.

But what happens in times like these is the possibility of someone stepping up.
That's always interesting, and well worth watching even though it feels like a car wreck.

Okay, yesterday.
LOVE LaStella's dive into the stands to make the catch on Joey Votto's foul ball, made even better by the face Votto made after.
Ben Zobrist seems to be the Old Faithful of the Cubs, with the homer coming after two disheartening strike outs.
Willson Contreras hit one out too, only his 5th of the year so maybe that'll get him going.

Anyhooo, it may be the time of year to freak out.
Be my guest - I'll join you.
But this is all normal.
As Joe said: 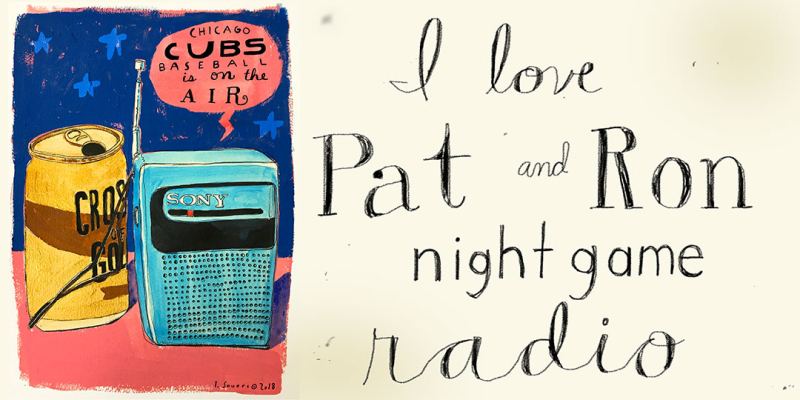 Told you how busy it was.
Still is.
Tonight I'm not gonna do nothin' except sit out back and listen to Pat and Ron with a cold one and the grill going.
Because I missed most everything this week except Tuesday's night game.
Which I got to go to, only really late because meetings - about the 6th inning.
I got to see Anthony Rizzo's astonishing double play where he caught the liner and touched first base.
I got to see Kyle Schwarbers home run.
Then, I got to see the 10th and it was just so fantastic.
We sat with a buddy in AMAZING seats who's a giGANtic Dodger Fan, so there was friendly ribbing going on of course.
But oh man, the drama when Kris Bryant led off (as shown in this photo of the woman standing next to us): 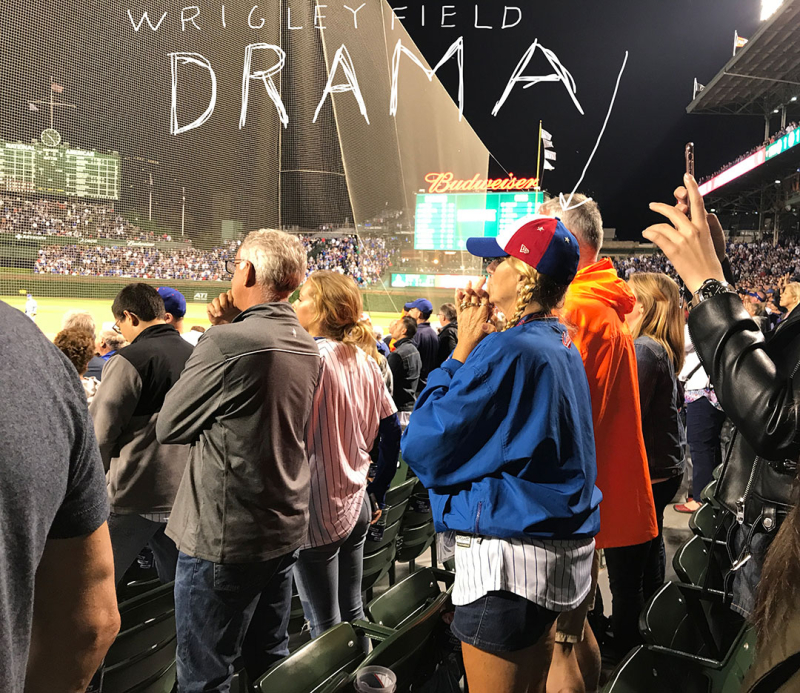 Then, the triple (I SWEAR this is the shot even if the trajectory looks wrong).
He dang near had a walkoff dinger to right, but instead bounced it off the corner and Yasiel Puig, even tho he's got a great arm, didn't play the bounce well.
Kris Bryant is so unbelievably fast.
And you go can you belIEVE that guy is six foot five? If he bulked up a little he'd be the exact same size as Richard Dent. 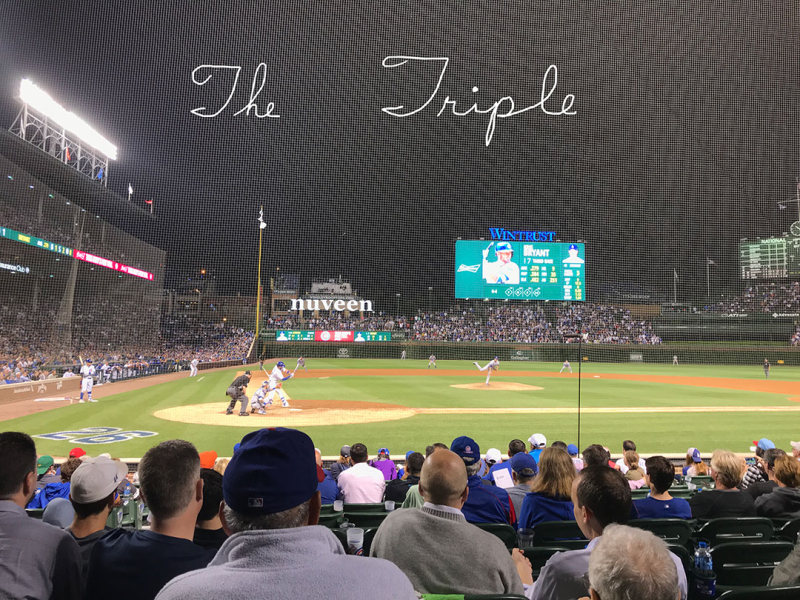 Then of course you know they walked Anthony Rizzo which was the right thing to do setting up the dee pee.
And it was up to Albert Almora.
He came through, as our Dodger Fan heard loudly from us all.
And KAYBEE crossed the plate... 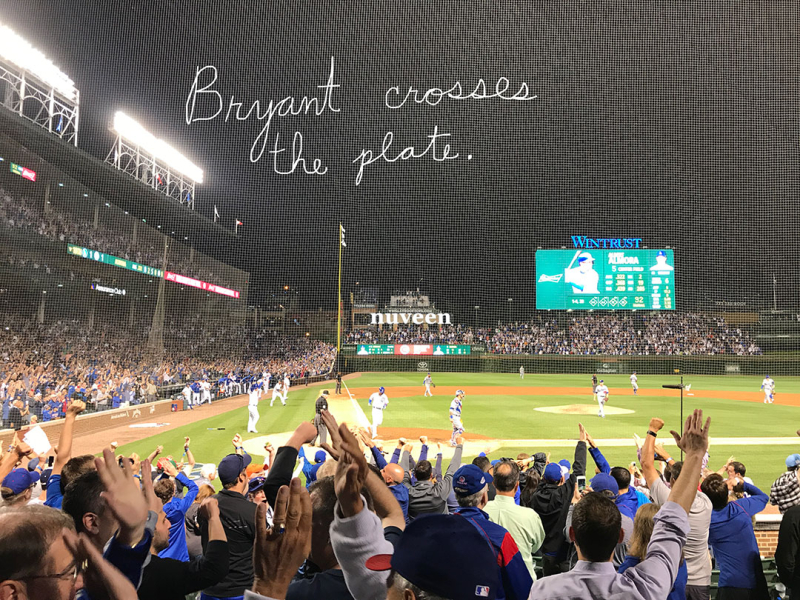 And then joy and singing and goosebumps and everything you dream of when you're lucky enough to get to Wrigley Field.
It was so perfect. 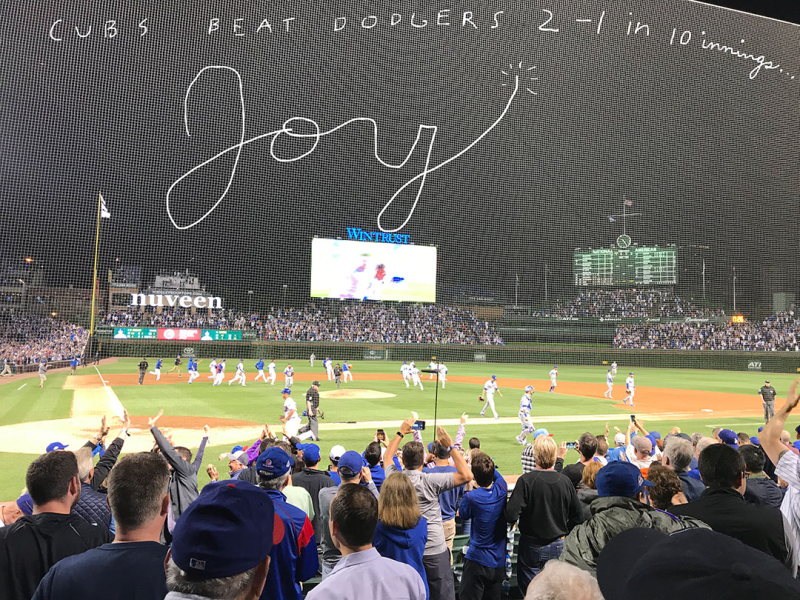 So other than that, I was either at a meeting, driving to work, staying real late, driving home and going straight to bed.
All things considered, my Cub Experience was quite successful.

Last night another bummer for Kyle Hendricks.
But he'll be fine.
And tonight, like I said... I'll turn on the radio (6:10 is an AWESOME start time), drag out a platter kinda like this... 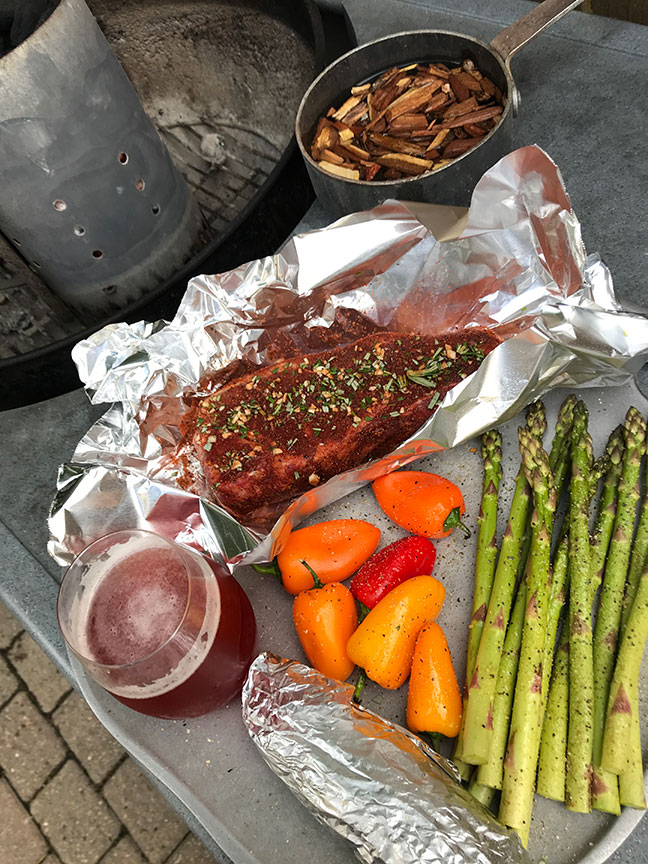 Cub Life.
Even if it's raining in my back yard, it's pretty nice.

What to do with your hands on Father's Day. (While watching the Cubs play the Cardinals, of course.) 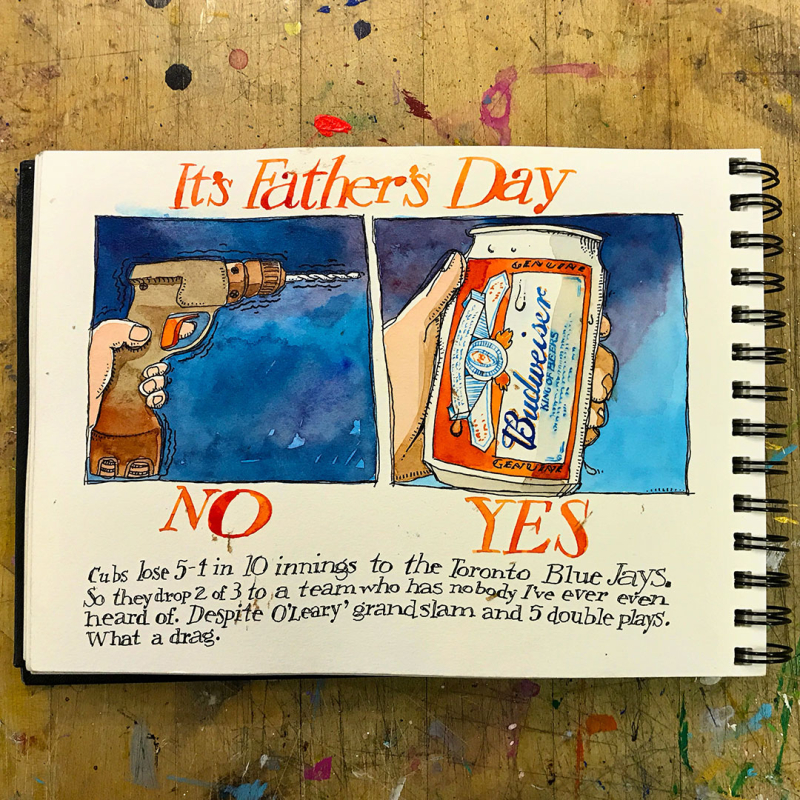 This is from my '03 Cubs sketchbook.
Cubs lost 5-4 with lefty Shawn Estes giving up most of the damage, but the killer being a homer hit off Mark Guthrie by.... Reed Johnson.
He hit two that day and 5 years later would become one Cool Cub with the apparent ability to grow 4" of beard overnight. 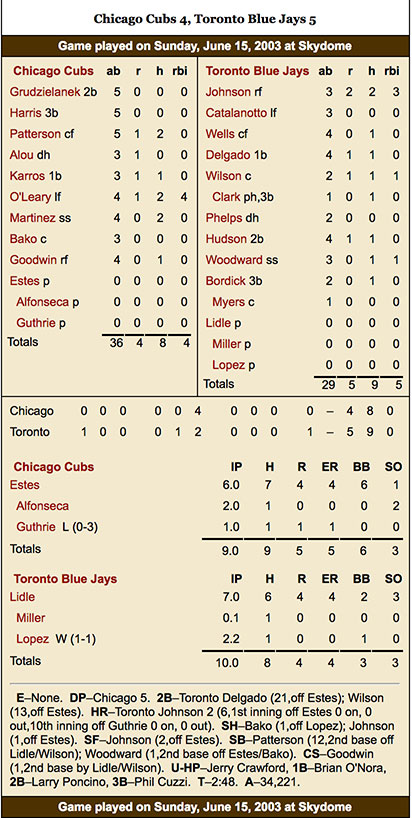 (Got the box from the Baseball Almanac)
This was a mid-June game during the season that turned out to be my favorite (yeah, even with the Steve Bartman ending) in the Time Before Theo.

Anyway, last night.
Kyle Hendricks getting his first W in almost a month, a hint of power from Addison Russell with the shot to center, and the super-sweet Heyward Homer off Speed Freak Jordan Hicks, who... even considering Aroldis Chapman, I have never seen a pitcher like that.
With Zobrist on first, Heyward hit a 99MPH breaking ball out to center.
No biggie with the 99, but when Rizzo came up?
104 MPH, 86, 103, 101, and 102.
Only one was thrown for a strike, but that's just... if you sent me that radar gun info on April 1st, I'd think it was a joke.

Cubs end up winning 6-3 as the Crew loses to the Phils (thank you), so the Cubs back to a half game behind.
With the chance to sweep the Cards in St. Louis tonight.
And THAT, would be such a nice Father's Day gift.

Speaking of which, this day is dedicated to the man who taught me to wear flip flops. Happy Father's Day, Pop and to all you other Dads.
Go Cubs.

I read somewhere it went about 465 feet, but it's quite possible that it went much higher than it went long.
Kyle Schwarber's 3-run monster shot off Michael Wacha was just something to behold.
It was the last of 3 homers hit by the Cubs as they busted out last night - the first coming from Ian Happ, and the 2nd coming from Kris Bryant.
That one was special.
He sat that last Milwaukee game, then the team has a day off.
All good - he hadn't hit a homer in over a month.
But I gotta say, when you hear that it's the worst homer drought IN HIS CAREER, I kinda snicker.
Come ON, man - it's his 4th season. He's 26. Why the drama for such a young kid?
Whatever, it's all better now - his swing was magnificent.
And spanking the Cards in such a huge way... just what they needed.
And Jon Lester... yeah I know Scherzer but damn he's pitching up on a different level, and it's just soooo fun to watch.
I just really appreciate when someone loses some velocity and has to learn how to get other stuff out of that same arm.

I'm sorry about the week of hardly anything.
Our dog died, and I had three 12+ hour days in the middle of the week.
Hasn't been ideal.
This win last night helps, though.

And now, my son just got back from 6 months in Spain, so I'm gonna go be dad today and hang with him.

It's the greatest rivalry in the history of sports, continuing tonight.
Perfect Saturday.
Go Cubs.