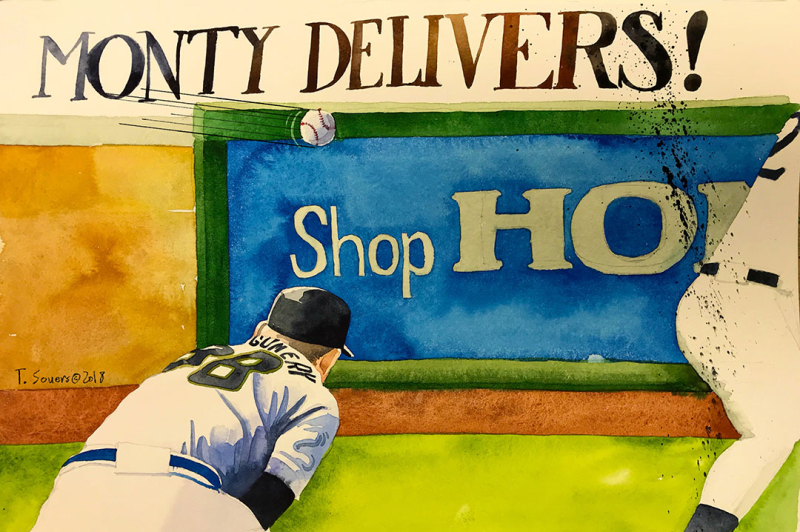 What a nice way to pick up the entire team, Mike Montgomery!
I figure most will be talking about the Rizzo slide, and we'll see if the Pirates really did think it was dirty and engage in retaliation.
But the headline to me was Mr. Montgomery.
Didn't give up a hit til the 5th, taken out with 2 gone in the 6th.
Tired team that traveled overnight Sunday and lost an hour going East, was uplifted by this performance.
I still think, however, that the Cubs gotta figure out how to fix Chatwood and pray there's nothing wrong with Darvish's elbow.
They're just so much better with Monty in the pen AND available to spot start like he did yesterday.
And keep the starters starting.
If those 5 guys do their job, everything else takes care of itself.
But... so nice to know Montgomery is ready to do what he did yesterday, and if they need to spot him again for either Chatwood or Darvish, then that'll happen.
A fabulous long Memorial Day weekend of baseball and BBQ and hot weather, huh?
Okay, gotta run. 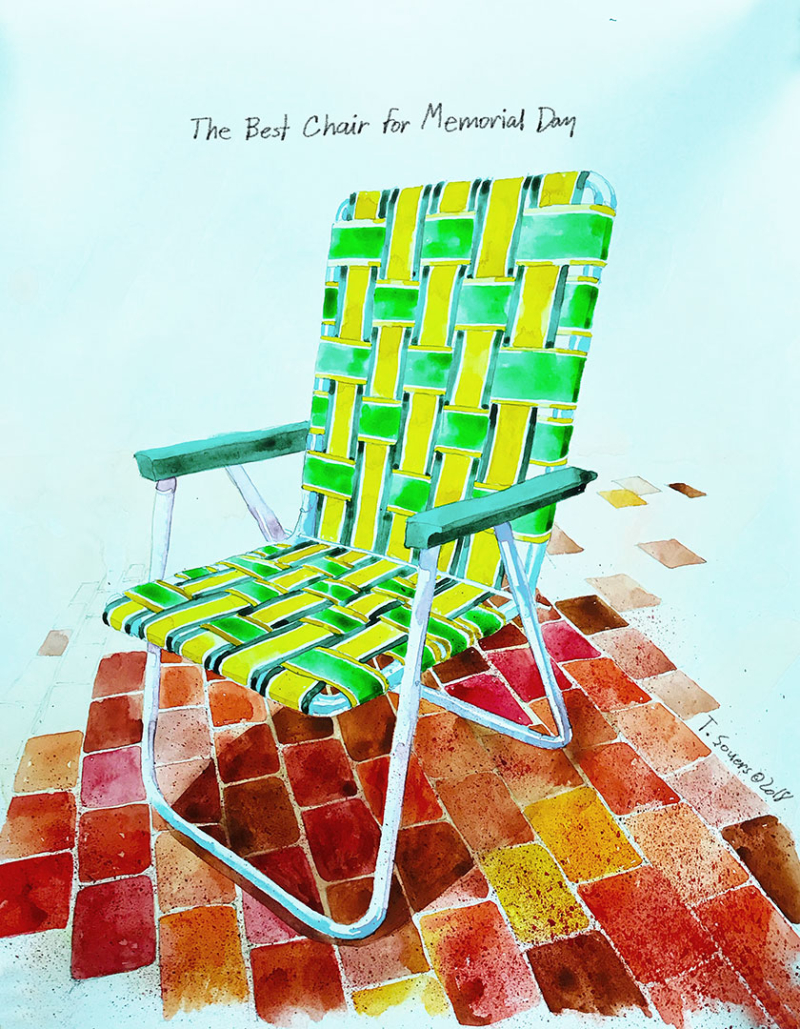 In a couple hours the Cubs will play the Pirates in Pittsburgh on a Memorial Day afternoon in 2018.
I shall be in this chair, in the shade, with Pat and Ron on the radio and a frosty cold one in hand.
And before the game, I'll make a point to think about how we get to experience this awesome weekend of baseball - the people in our military.
Keeping us safe so we can pursue things like enjoying a baseball game.
My dad is retired Air Force living in Arizona, and he'll be doing the same.
Here he is, in baseball speak: a young prospect signed with 20 years of the Home Team's control. 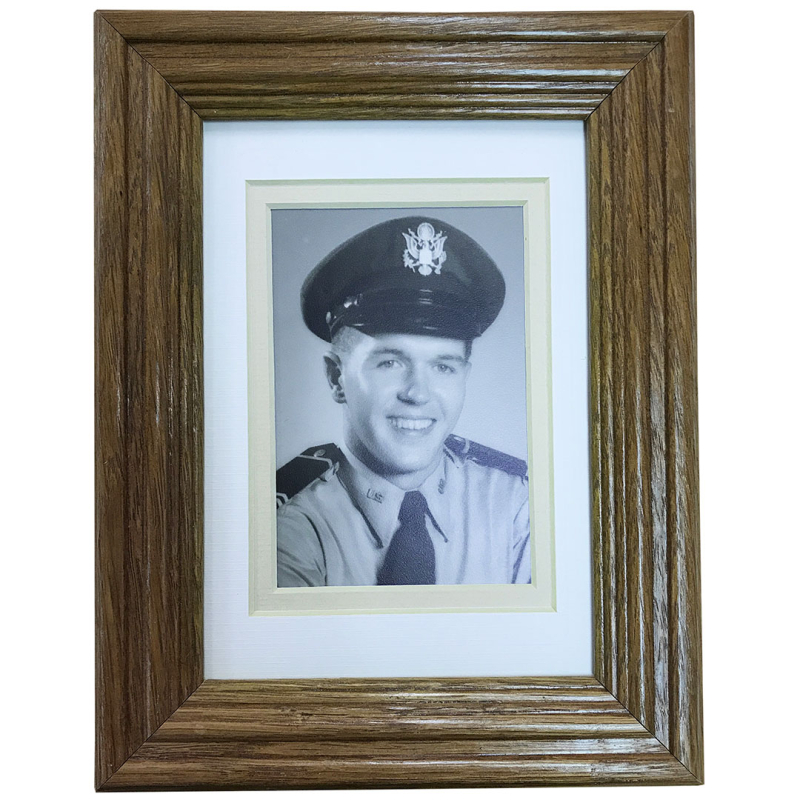 So proud of him.

And on a completely different scale, proud that the bats were able to pick up the struggling Tyler Chatwood.
His performance, along with Yu Darvish's tricep tightness, is the kind of disaster that'll make you forget all about any Machado trade talk.
Because there's real stuff that needs fixing.
The next 34 days, the Cubs get 2 days off.
That's one rough stretch even without any 2 of your starters being iffy stuff.
But enough of that worry, today's a day to chill.

Kyle Schwarber is a left fielder for real.
His play out there has erased all the bad stuff people were saying about him.
The play where he got Lindor at 2nd with that incredible sliding stop and powerful throw took my breath away.
Albert Almora is making a living on highlight reels for his play in center field and he's hitting .326/.377/.457.
Kris Bryant is putting up almost the exact same numbers as Ernie Banks in his first 500 games.
Javy Baez' bat.
Justin Hancock and... Randy Rosario - come on man, that was 7 outs of clutch pitching yesterday.
Cubs take the Giants series with a 8-3 win Sunday...
There's just alot of good to celebrate with our favorite team.

Anyway, enjoy the game and the day.
Go Cubs.

Amid rumors, what would it feel like to be Addison Russell? 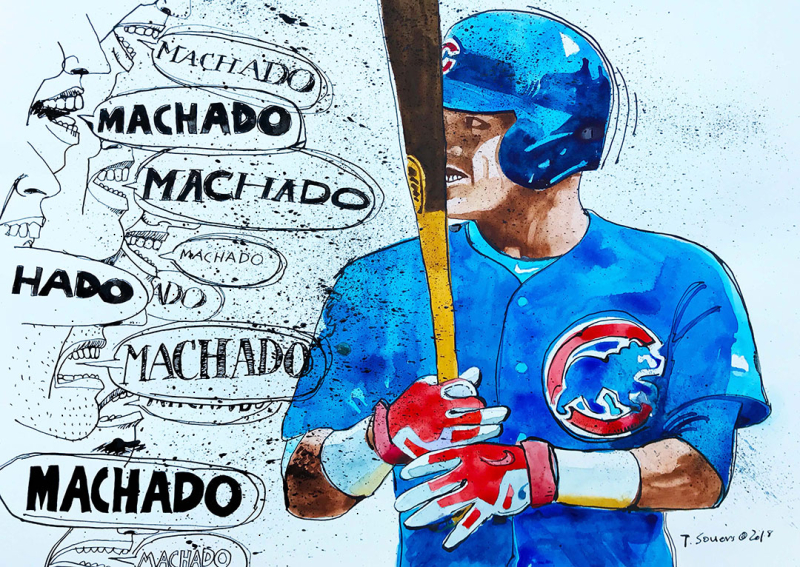 We can all name past Cubs who we wish had never been Cubs.
But this is so different.
Addison Russell is the shortstop for the Chicago Cubs.
It's freaking MAY!
That's a human being out there, and he's 24 years old.
I don't know how he went 2 for 3 and knocked one in yesterday.
People whispering behind your back is the worst.
One time in high school I came home from a dance with... hickies.
It was the '70s, I didn't know it was happening, and it was my mom who spotted them the next morning.
She laughed so hard...
I wore turtlenecks for an entire week, couldn't make eye contact with anyone because I was paralyzed with the fear of hallroom chatter.
That was hickies.
I can't imagine what it would be like if it were your career people were whispering about.

Okay, much better yesterday, eh?
Kyle Hendricks much more Hendricksian, bats did their thing.
Am I imagining things or is Ben Zobrist responsible for lots of clucthy bat behavior this year?
Anyway, I apologize but since I painted all morning, I'm now in hot water and have brunch duties, then... I gotta clean the garage.
Gotta run, but an awesome start to the weekend series vs. the Giants. 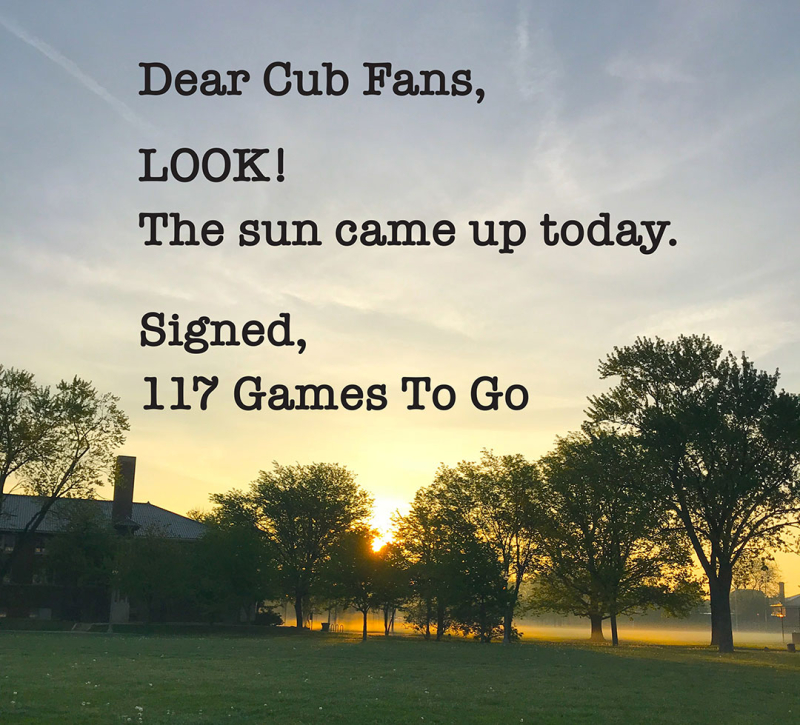 Yeah.
That was awful.
BB Chatwood.
Addy Nopower.
Monty Misfire.
The struggling Indians beat the living crap out of the Cubs 10-1 last night.
Luckily, I had a meeting that started about 6 and went a couple hours, so I missed the early carnage.
But one thing I didn't miss?
The anxiety.
The doubt.
Dealing with a Cubs team that seems to be having an internal struggle, like instead of an angel and a devil, they've got a W Flag on one shoulder and an L Flag on the other.
This would be fine if we weren't all thinking World Series for real since spring training.
I thought this was the year that the Cubs Kid Kore would be past any "sophomore slump", and they'd all reveal their true selves.
Only I thought that meant they'd be the '85 Bears.

So...
I was walking really early this morning and took that picture.
Remembered my dad telling me the sun would come up tomorrow after I struck out to end a little league game.
Yes the Cubs seem unbalanced, there are rumors flying like crazy, but... there's also 117 games to go.
The trading part won't really happen for like a month - month and a half.

I'm going to do my best to try to stay somewhere in between sane and crazy and hope the Cubs keep winning more than they lose and maybe along the way they'll figure out who they are.

2 Cub pitchers going in opposite directions: Rosario and Wilson. 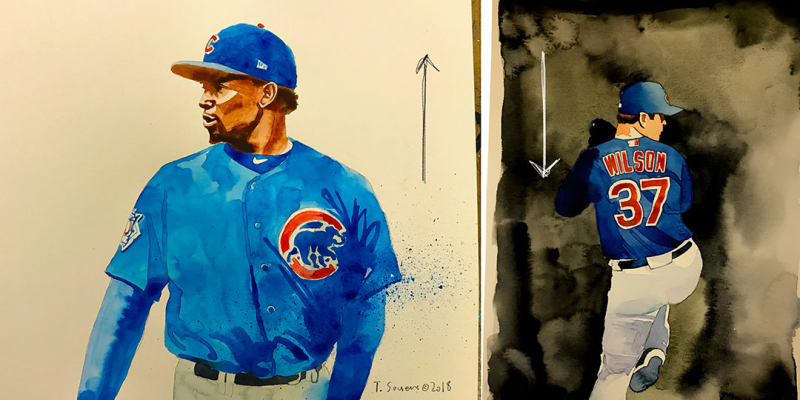 I lost my mind yesterday.
After angsting about a double header opening with an extra inning game for our pitching-taxed Cubs, Justin Wilson came in and just trashed every hard earned comeback run the Cubs had pulled out of their rear ends to somehow still be tied at the beginning of the 11th inning.
This against the worst team, by far, in the NL Central.
That was the worst inning of baseball, and the worst performance by a Cub pitcher in forever.
The last walk that forced in the Reds' winning run against Billy Hamilton?
We all think Javier Baez is struggling right now, but the way Billy Hamilton was making his bat move... it looked like he totally forgot the concept of "swing".
Lost.
My.
Mind.
And after his last horrible ball four, what do you do with him?
Where did he go in the locker room?
I can't imagine how awful that was.
I've been pulling for him to come around, he's obviously got some talent because HE WAS THE CLOSER FOR THE TIGERS.
Joe has confidence in him.
I would too if I were Joe and this guy was costing north of 4 million bucks.

Okay this new Rosario guy.
Randy.
He was claimed off waivers last November from the Twins.
You can read that his game was totally trending the wrong way, and yesterday's performance could easily be a blip, but...
He looked brilliant.
It was the way he struck out Billy Hamilton in the 6th - making Hamilton step backwards with his back foot so far that he almost fell down while weakly waving his bat at nothing that made us all realize how off Hamilton is.
Anyway, the kid looked good but he was added as the 26th man for the double header so probably already heading back to the minors.
The dustup between Baez and the pitcher he hit a salami off of last year isn't worth mentioning.

Game 2 was fantastic.
I cannot wait for more consistency among the starters especially Jose Quintana, and by "more consistency" I mean it like he was last night.
7 innings. 1 hit. Zeero runs.
Not talking about the 4 walks.
Ian Happ is hot, always cool to see La'Stella come off the bench and do what he does. Last night 3 for 5 giving Baez the night off.
Kris Bryant.
The player with another layer.
He's got different dimensions to his game that are difficult to comprehend.
I'd love to sit next to some wily scouts and hear what they have to say.

Oh yea, and a 10-zip shut out is way more like what it's supposed to be when you play the Reds.

More of that this afternoon, please. 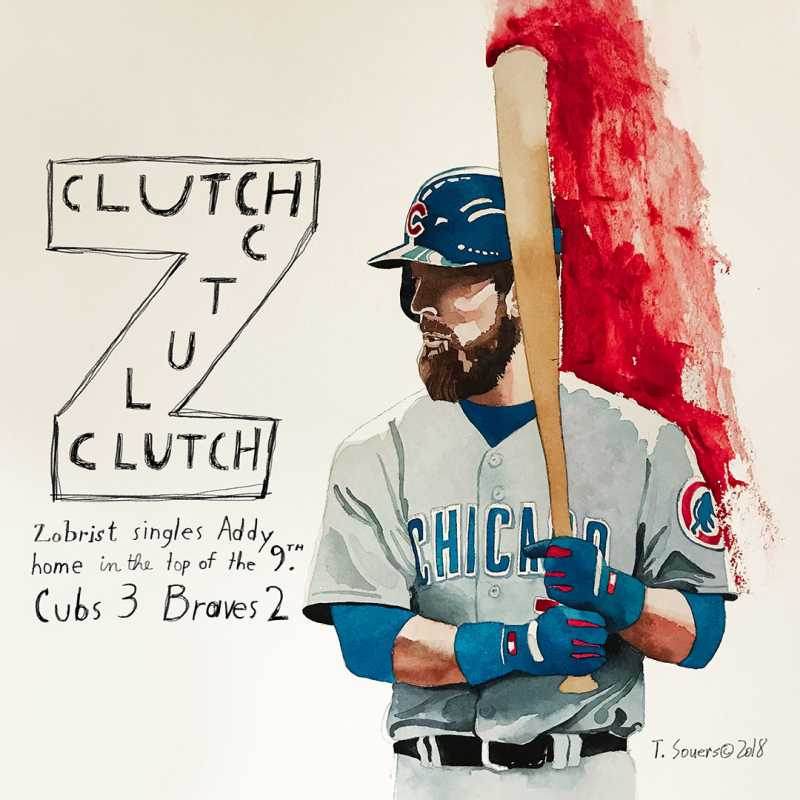 After the disappointment of leaving the bases loaded and the tying run on 3rd yesterday, Ben Zobrist's super clutch single knocking in Addison Russell after Addy's super clutch double was as much clutch as I've seen in weeks.
What is it with these Braves?
Weren't they supposed to suck this year?
And weren't the Cubs supposed to be about 10 games in front of everybody in the Central by now?
This is one confusing season so far, and our collective fuses are so short... if the Cubs would have lost last night my anxiety level would have sky-rocketed.
The mood swings, and I can't help this for some reason, they're way the hell up or down this year.
On the drive into work, I'm either letting people merge in front of me or SPEEDING UP TO CUT 'EM OFF.
Yu Darvish had leg cramps last night?
Right when the dryer's beeping?
I GO OPEN THE DOOR AND SLAM IT SHUT AND LEAVE THE CLOTHES TO WRINKLE.
Addison Russell comes up with one out in the 9th and all I can think is how my confidence level in him has so fallen right when the dog wants to go out?
SHUT UP, FLUFFY!
Then he doubles and I carry the poor little thing down the stairs of the back porch and gently place her in the yard.
When Brandon Morrow got Ender Inciarte to ground out to Baez for the last out and the Cub W, I thought man... I might actually sleep tonight.
I'm so happy the Cubs have the cool even keel veteran presence of Mr. Ben Zobrist.
And happy to report that I'm totally back to even keel.
Of course, as I was typing "even keel", I thought... well you can also say "I WILL EVEN KEEL YOU!"