WHAT AN AMAZING WEEKEND OF CUB BASEBALL!
A 4-game sweep of the Milwaukee Brewers?
InCREDible.
I'm making breakfast this morning and don't notice the vibration in my pocket letting me know I have a text.
I just... make breakfast.
Sometime after, I look at my phone and... what's this?
A text that reads, "We've got an extra. Can you come to Wrigley?"
From Cub Buddies Sutter and Don.
Met them at Lucky Dorr, which is sort of part of the Cubs Store building.
It's like a little garage with craft beers on tap.
Had a lager, tasted like Bud.
Went inside and just as we got to our seats, it was ball four from Tyler Chatwood to start the game.
Lorenzo Cain jogs to first.
Yuck a rama, but shortly after there's a gorgeous inning ending double play.
We sat there for a couple innings and then decided to move to a better seat - lots of empties.
Moved up high right behind home plate - seats were gorgeous.
But I really started to notice this:

It was so beautiful on the field, but if you were in the shade like we were, it was freaking freezing.
Sutter even had gloves that I scoffed at earlier.
I never learn.
Oh well, like I said Chatwood scores Russell who'd just hit a triple and...
Nobody knew then but no other runs were necessary since Chatwood was brilliant through 7, and then Carl Edwards Jr and Brandon Morrow finished it off.
Cubs 2 Brewers nothin'.
A third shut out of the Brewers in a 4-game series.
Someone tell me that's a record of some kind.
Ryan Braun was a non-factor unless you count making all my Cub Fan Neighbors at Wrigley loudly boo their dislike of the man each time he came up.
He's so good at that!
Somewhere in the middle there I was able to text a pic of the scoreboard to Dickie the Cardinal Fan (it didn't move like this fancy gif, but you get the idea).

Those goose eggs would continue for the rest of the game for the Cardinals, who lost to the Pirates 0-5.
They also fell from first place in the morning to third this afternoon.
Behind our favorite team, the Chicago Cubs.
They were so giddy at Wrigley that a nice woman at the exit handed me a little book of coupons so I could rush over to the Jewel and buy some Cubs Blueberry Waffles for a buck off! 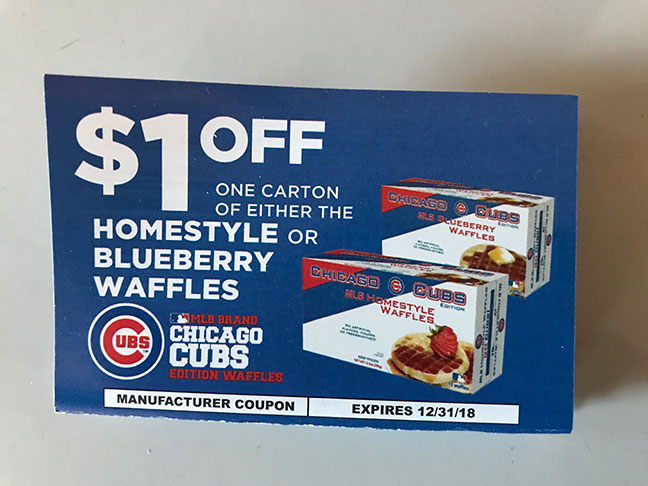 If you didn't notice, the offer is good through 2018!
I might save this thing and have some celebratory waffles late October-ish.

This whole series has been just what the doc ordered.
Some excellent starting pitching, timely Cub bats, and a city living up to it's nickname with wind that the bamboozled the Brewers(although "Windy City" is supposed to refer to the politicians).
Seriously, haven't you just been in the best mood?
3 straight wins over the red-hot-a-couple-days ago Brewers... that's pretty fantastic.
So a chance of a sweep on Sunday plus the return of Kris Bryant and the fact that the Bears drafted a middle linebacker has me walking on wind gusts.

Jose Quintana was excellent yesterday.
I think he had 82 pitches going into the 7th, which translates to: he was breezin'.
The Brewers' Junior Guerra was almost as good with just 3 hits and a run over 6, but the guys with gloves behind him Three Stooged on some pop ups and let them fall for hits.
In the 7th Zobrist solidly singled in front of Jason Heyward and his solid double.
Then Tommy LaStella hit a bloop just out of the reach of SS Orlando Arcia and in front of LF Christian Yelich.
Zobrist scored easily as Arcia picked up the ball but then spaced out while holding it and Jason Heyward took off and head-firsted across the plate.
Those couple insurance runs made it 3 zip.
Three Ks and 4 outs for Strop, then Duensing and Cishek got the last two and up came a W flag.
It fluttered, of course.
Windy out.

I'm not sure what angle in launch angle is the optimum, and I'm not gonna try to find whatever the exit velocity was.
I'm just saying that from my old school perspective, Kyle Schwarber hit the ever-lovin' snot out of that ball.

What a fabulous score and all around offense with 2 dingers from Kyle, 1 from Willson Contreras, and 1 from beleauguered Ian Happ (and the better news was he went 3 for 4 with 1 K, rather than 1 for 4 with 3 Ks).
Plus, even though he had 5 walks, it was quite nice to see Tyler Chatwood get his first Cub W.

Still insanely busy and I don't see the light at the end of the tunnel and gotta run, but also gotta shout out to the New York Mets for a nice extra inning W over the Cards.

Now tonight at 6 Chi-Time, I'd like to see Jon Lester throw well on normal rest - it just seems all of his good starts so far have come after extra rain days.
GO CUBS!

Digesting the Cubs' 9-7 victory over the Rockies.

Sorry, I'm in the middle of production, Sunday was not a day off and I don't have a painting.

The headline from hell was Kris Bryant getting beaned in the head (I'm sure you've all seen it too many times like me).
Did you know that in the entire MLB, there are 3 Cubs in the top 10 getting hit by pitches? 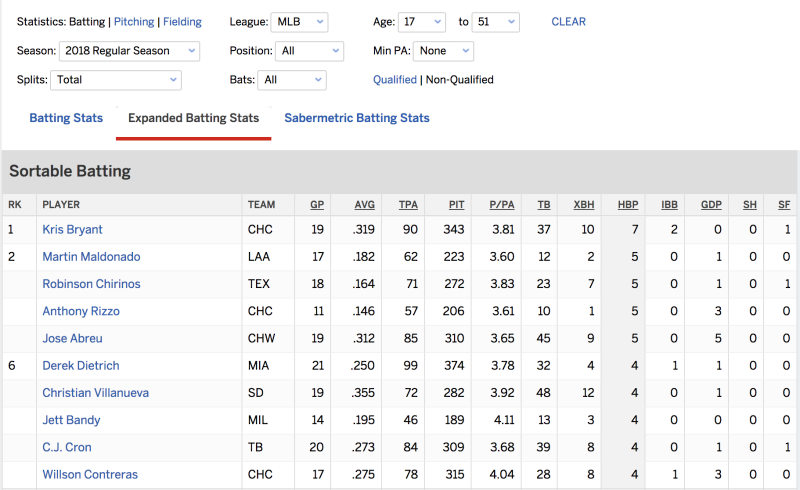 I don't think it's shocking that the scouting report says to throw inside vs the Cubs.
Because they're good.
But it's kind of unreal isn't it?
Bryant, Anthony Rizzo and Willson Contreras all in the top 10, and no other team in ALL baseball has more than one guy up there?
I get Rizzo, but Bryant's stance isn't what I'd consider on the plate.
Neither is Contreras, really.
Have the Cubs just been playing in such crap weather that pitchers just don't have the control they normally do?
WTF, guys?

Cub pitching isn't above hitting guys, either.
In the NL, the Brewers and Cards lead the way hitting other batters, but the Cubs aren't that far behind.
And the Rockies are tied with our fav team. 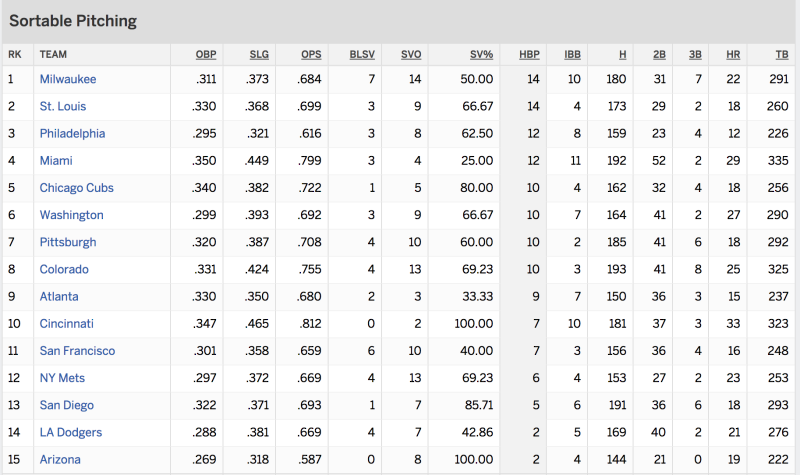 Ah well, Bryant doesn't have a concussion and hopefully will be playing vs the Indians on Tuesday.
That was so awful.
If I'm a pitcher for any other team, I don't come near Bryant.

Okay, other than that.. Albert Almora.
If he becomes the regular out in center, the Cubs could have two gold glovers in the outfield.
And that's not a small asset.
Everybody said that if not for Almora, the Cubs lose that game against the Rockies.
All the magic surrounding that has what must be a gigantic effect on pitching, and this staff needs it bad.
Especially now when it's cold and crappy out.
Jose Quintna or Jon Lester or whoever makes a mistake and some cleanup guy launch angles one way up there, it's gonna get caught.
You'll be less worried about being perfect, and all the starters can use a little of that.

And Tuesday.. hey look, it's a rematch of the '16 World Series.
Seems like a long time ago now, doesn't it?
But you know what the Cubs do?
They rally around bad stuff.
And I think Bryant getting beaned is bad news for other teams.
I'm not sure I've ever seen anything as gut level touching as Joe Maddon's fatherly hug of Bryant right after the beaning.
The team's emotional nerve endings are on high alert.
I wouldn't want to play the Cubs right now.

Last thing, and nothing to do with baseball.
John Prine just put out an album of original songs, his first in years.
He's a national treasure, the best kind of person, and his songs are all storytelling no one can touch.
You should give it a listen. 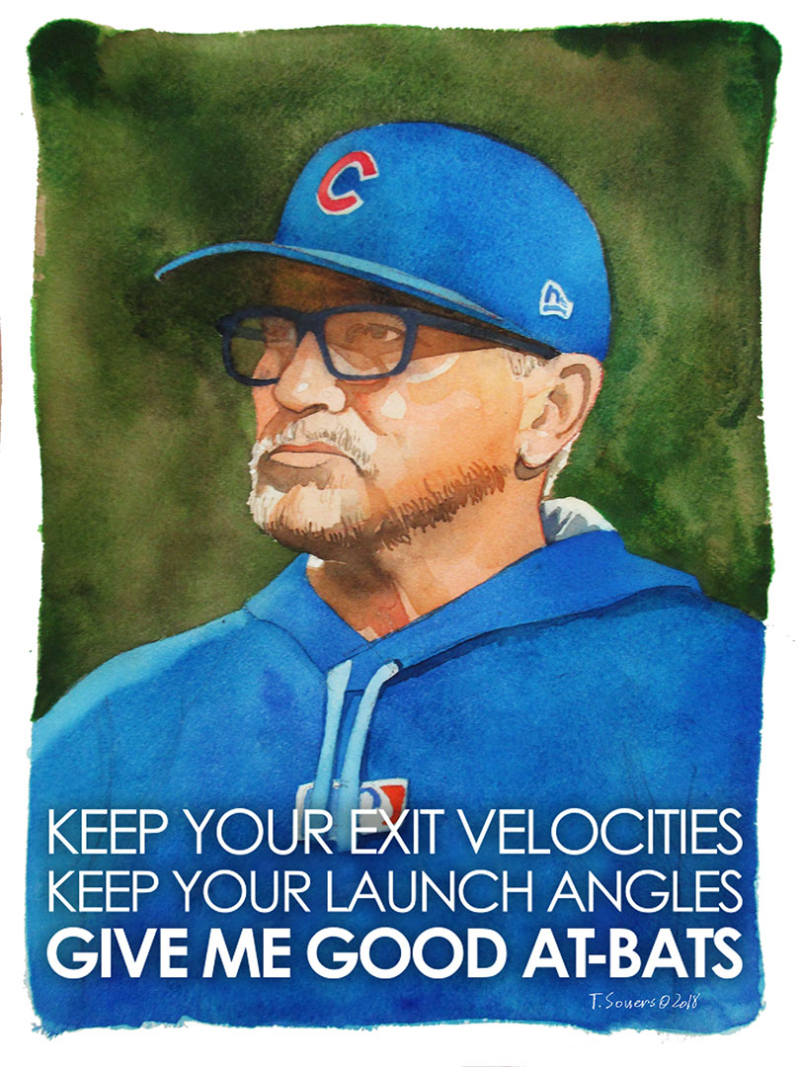 That's more like it.
So nice to have Joe Maddon say stuff like this than something about the weather, right?
You wonder if there was some kind of memo that went out to the team saying, "Hey man, you don't have to swing for the fences every time."
Only 6 Cub Ks vs the Cardinals' 11.
A huge small inning with 5 singles (most to the opposite field) a Lester bunt, a Bryant sac fly, a Contreras hit by pitch and 4 runs in the second.
Before it's over, the meat of the order is spread nicely throughout.
Anthony Rizzo has 3 hits, Baez/Schwarber/Heyward each have 2 and a smattering of others total 14 hits.
Gorgeous.
After that first loss, Cardinal Fan Dickie texted me that with that win, the Cards had tied the amount of wins they had all last year at Wrigley.
So nice to not get a text from him yesterday.

Because Jon Lester.
And some good at-bats.

Tonight they begin 3 games in Denver where they're supposed to get highs of 55, 50, and 66 over the weekend.
We'll see if the batting approach remains the same in the temptation of Coors Field. 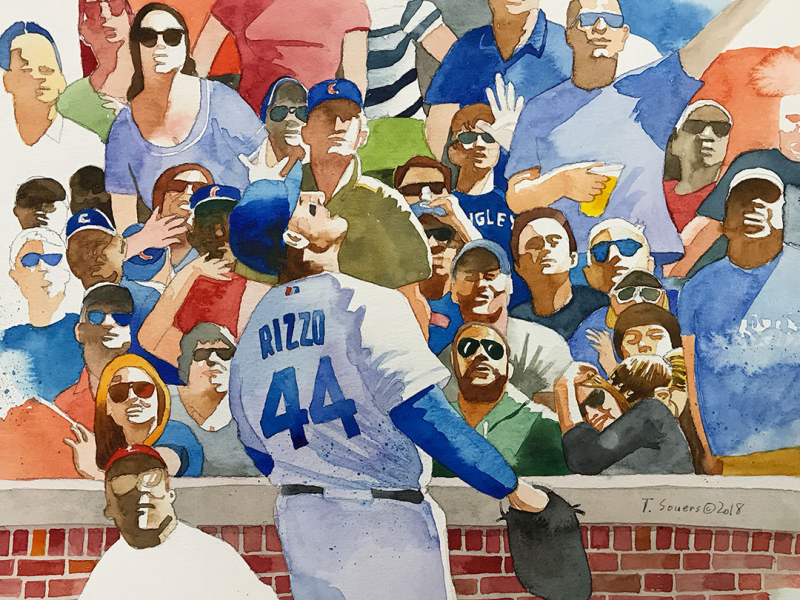 How much have you missed him?
I mean, I applaud the job done by Victor Caratini, but no Anthony Rizzo means there's a giant hole not just in the lineup or at first, but in the soul of the Cubs.
Did you happen to watch any of that awesome 70th Anniversary of showing Cubs on WGN last night?
It was amazing.
Showed all the no-hitters, Ernie Banks' 499th and 500th homers, Ryno, Billy Williams, Ron Santo, Don Zimmer, Jim Frey, Lou.. it was amazing and I found myself standing most of the time.
But at the end they showed, of course, 2016.
And the team's celebration in Grant Park which included Rizzo's heartfelt thanks to all the Cubs who came before him.
Try to keep a dry eye through that.

Anyway, the other cool thing is baseball will actually be back tonight when the Cards come to Wrigley Field for the first game since the Ice Age of 2018 began (and it's probably not over so...).
The Greatest Rivalry In Sports.
Is Adam Wainwright finally over the hill?
He's only thrown 10.2 innings through 2 starts and given up a couple homers and a dozen hits.
He's 0-2.
He's also got about 1000 wins and 2 losses at Wrigley.
So come on, Tyler Chatwood, show the Cards what you're really made of and begin your winning ways at your new home park.
And... welcome back Anthony Rizzo!
Go Cubs.