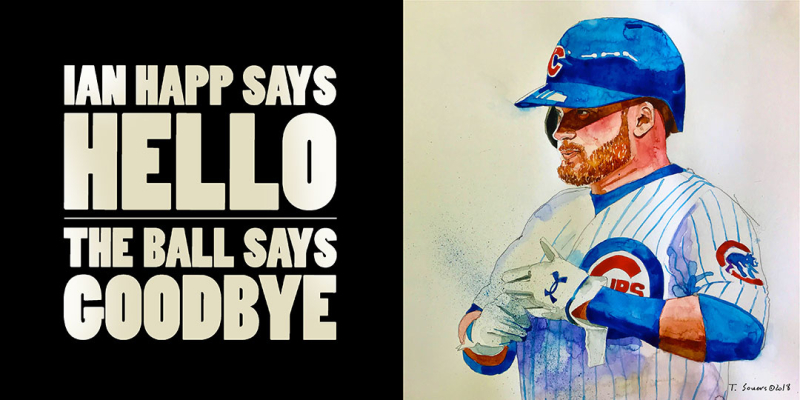 That was about as cool a thing as anyone could possibly imagine.
The first pitched ball of the 2018 MLB season never touched anything but the bat of Ian Happ and then some fan in right field.
About 3 seconds of pure Cub Joy.
I'm sorry I don't have time to write today, but the only other thing I want to say is the Cubs left fielder will be just fine.
I'm not going to worry about Kyle Schwarber.
That'll happen once in awhile, I expect it, so it's off my radar.
Other than that...
OH MY GOD I COULDN'T BE HAPPIER THAT BASEBALL IS HERE AND IT BEGINS WITH A W, while the rest of the Central begins with a buncha L's.
I could not be more excited for young Happ, and Go Cubs.

Cubs Fans, kindly remove your hats. The 2018 Season is about to start. 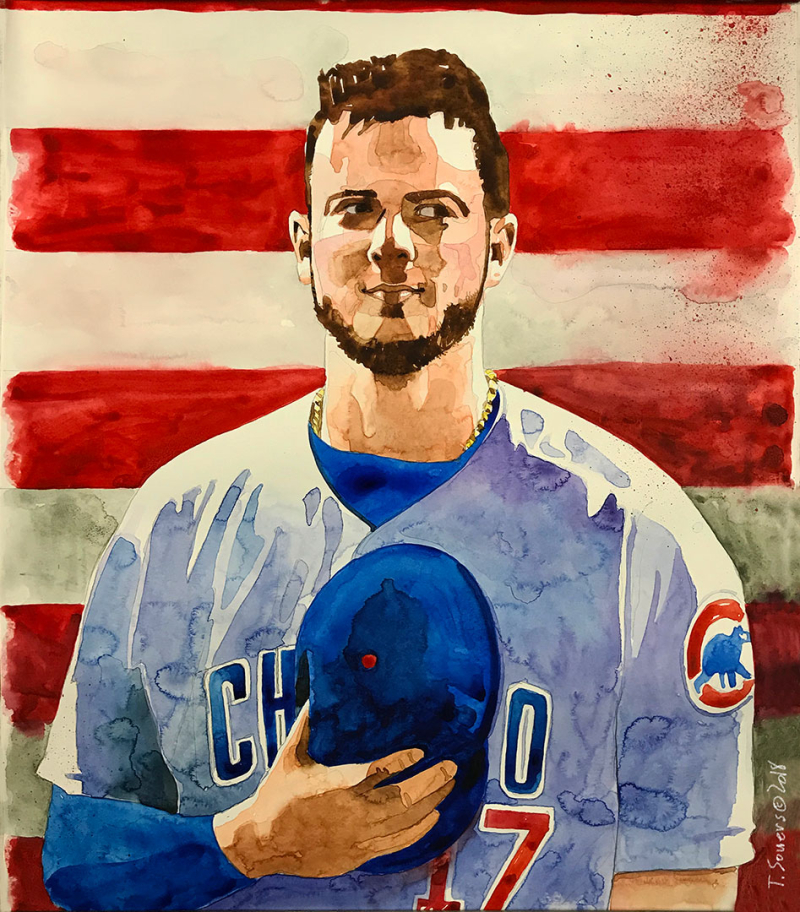 It was just a couple years ago.
The Cubs Way came into focus, Theo and Jed got The Core in place, and talk of a World Series coming to Chicago started spilling out of our mouths.
In between 2014 and 2015.
Kris Bryant and Addison Russell would be brought up to the Bigs and join Arismendy Alcantara, Jorge Solear, Javier Baez and "veteran" Anthony Rizzo.
Kyle Schwarber was maaaybe a catcher but we weren't sure.
Jon Lester got on the bus and as a throw in the Cubs signed an old guy named David Ross as a personal catcher.
Jake Arrieta had been transformed by Chris Bosio and just had the best season of his life with 10 wins and a 2.53 ERA.
Kyle Hendricks had thrown 80.1 innings in his first year. Won 7, had a 2.46 ERA, and you heard rumors of smart baseball people saying he might be the next Greg Maddux.

But even though it was a time of the greatest optimism EVER, I thought these kids needed time.
And trying to keep it real in my head, I figured 2018 would be about the right.

Oh guess what?
(Well there was history made of course, but also...)
Now it's that time.

The other day Mr. Maddon said, "I can call us 'young' but I can't call us 'inexperienced' any more."

There isn't one Cub I don't expect a huge year from.
And the potential for some kind of All-Time greatness is as real as the stare of Anthony Rizzo.
There will be stuff, mythological stuff, that will happen in 2018.
And people will remember and talk about it in 2068 like Tinker to Evers to Chance and The Homer in the Gloamin'.
Anticipation is for ketchup*.
I want and need this Cubs baseball season like oxygen.

*Showing my age and profession, here is a Heinz ketchup commercial from 1979:

Go Cubs.
Everybody In.
Fly the W.
All that stuff.

As Opening Day approaches, my Cubs Brain is working overtime. 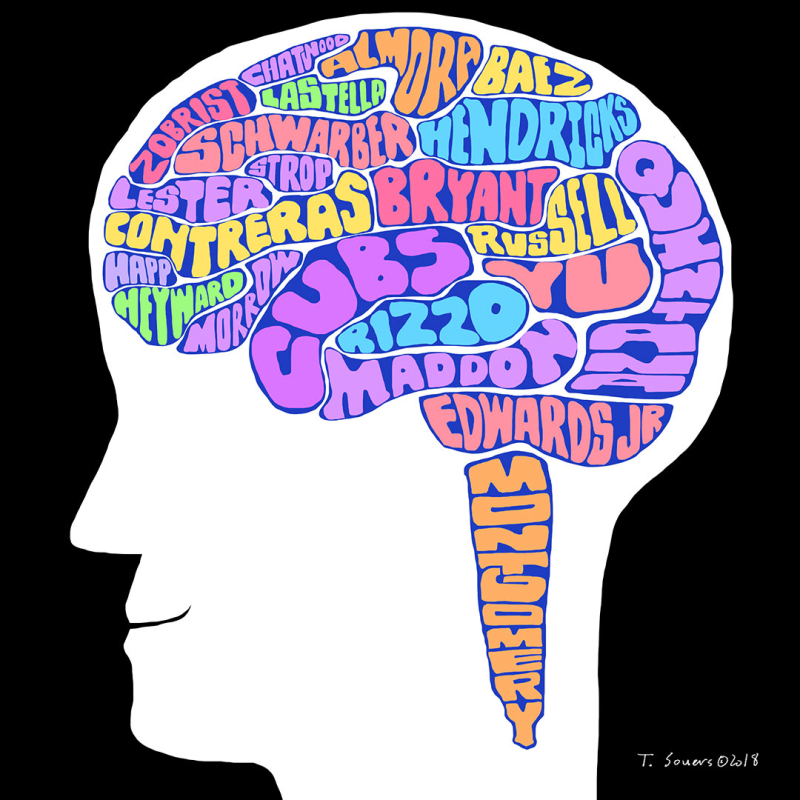 Now that Peter Bourjos will be released and Victor Caratini beat out Chris Gimenez, the only thing to sort out is Pedro Strop's health and who that last reliever will be.
Except for you and me.
For us there's so much to think about.
You saw the article with Kris Bryant saying yeah, the lineup has the potential to have eight 20-homer guys in it.
That Maddon said he no longer thinks of the Cubs as inexperienced, just young.
That and the fact that real baseball is a handful of days away and you got nothin' but Cubs on the brain.
I'm tired of saying, "I can't wait".
But... I CAN'T WAIT!!!

Will "Mound Visits" get their own space in the TV infographic during baseball games?

Hmm.
I wonder.
Will "Mound Visits" be as important as, say, time outs in football?
Will we see them on scoreboards and box scores and those infographic thingies in the upper left hand side of your televised baseball game?
Or will they make a guest appearance, like the radar reading on a pitch?
Just pop up when it happens?
This teeny thing that may or may not actually speed up the overall time of a baseball game... will it actually become a compelling, interesting part of a game?
Because you have to make a pitching change if you go over 6 mound visits.
Or, a possible ejection.
This from The Comeback: Speaking at a news conference later in the day, commissioner Rob Manfred and MLB chief officer Joe Torre said umpires will simply tell a catcher or other player to return to his position if his team has used up its six visits. If a catcher defies that order and gets into an argument with an umpire, then an ejection could be in order.

So just thinking out loud...
Say Carl Edwards Jr. is rested and really has his stuff and is mowing 'em down in the top of the 8th but he's got his signals screwed up and Willson Contreras runs out there, accidentally going over the 6, and Edwards has to take a seat.
And Strop has to come in even though he's pitched the last 2 days and just doesn't have it today, gives up a homer.
That could be a big deal.

I'll believe the ejection when I see it.

Anyway, just wasting time til real baseball happens.
A week from Thursday.
A WEEK FROM THURSDAY!

One last thing.
Justin Turner busted his wrist getting hit by a pitch in Spring Training.
It's the absolute WORST.
I can't find it online because it happened before the internet, but that happened to Ryno one Spring.
Horrible.
Remember Derek Lee's?
That came in April, he broke 2 bones and was much worse than Turner's, but Lee wasn't the same hitter all season.
Anyway, wrists are tricky and while he won't need surgery, it'll be interesting to see how Turner is when he comes back.
In the meantime, that's just a reminder that unthinkable things can happen at any time.
So... not thinking about it.

Cubs Sunday: What happens in Vegas, stays in Vegas. 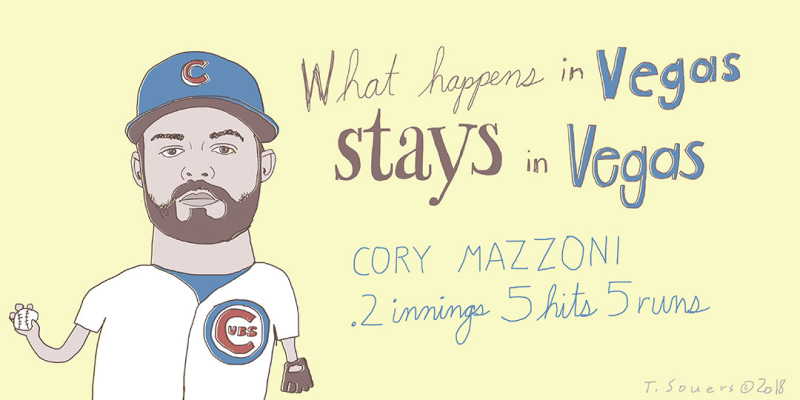 Because of work or life or whatever, Sunday was only the 2nd time this Spring I was able to sit down and watch a game from the beginning.
And apparently, it's not good luck.
They played in Las Vegas, and after seeing Sloan Park, it was almost shocking to see such a shabby Vegas field.
Rob Zastryzny fanned Francisco Lindor to begin the game, but after 8 outs he'd given up 5 runs on 5 hits and worse, walked 4 Indians.
So I was super pumped to see Dillon Maples come in, but he couldn't really find the plate either.
Len and Bob speculated that he was being directed to throw mostly his slider, and maybe that is what was going on.
Still, he walked 3 during his four outs.
Then came Cory Mazzoni.
Poor guy couldn't get out of his only inning before giving up 5 more runs. He got to 2 outs, and you kept thinking well, he'll get this next guy.
Then you thought it again. And again. And about 14 hours went by while you were saying that.
Only 2 of his runs were earned, though. The Cub b-teamers looked sloppy with an error at 3rd by Ryan Court and one not called an E in center that went in and out of Jacob Hannemann's glove.
But hopefully what happens in Vegas, stays in Vegas.

All in all, Cub pitching gave up 22 runs yesterday - split squads giving up 11 each to Cleveland and Kansas City.
Luckily we could turn our attention to all the college basketball giant-killing going on, especially with the local favorite Loyola Ramblers.
2 games won with last second shots over teams they're sooo supposed to lose to makes for exciting stuff.

Okay 10 days from now, Jon Lester's gonna get on a mound in Florida and throw for real.
And 11 days after that will be the Cubs home opener.
Here's a screen grab off the Cubs.com schedule: 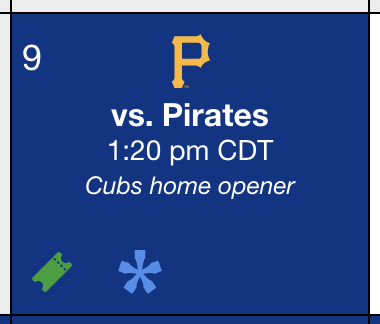 Looks like they're predicting snow, right?
That icon means there's some promot...OH MY GOD I JUST REMEMBERED FRIDGE MAGNET SCHEDULES!

It's the greatest time of the year. 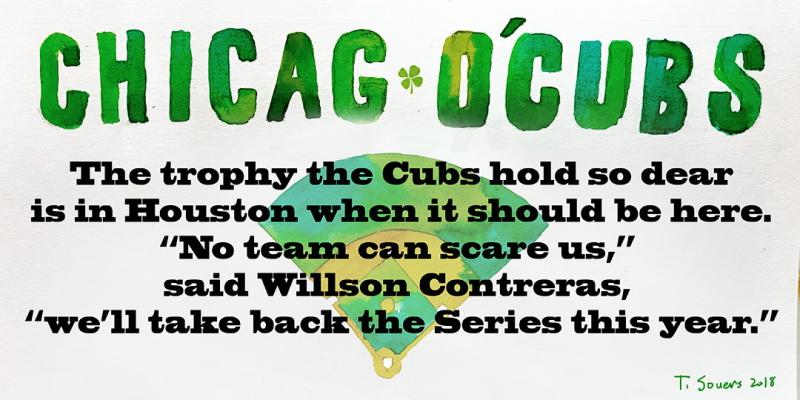 Maaan, this waiting for The Season to begin...
IT'S DRIVING ME MAD!"
Crazy enough to write a limerick.
Oh well, Happy St. Patrick's Day.
I was over at Jake's Pub the other day and this year - it's kind of a Super Nova with St. Pat's actually falling on a Saturday.
Behind the bar, they all rolled their eyes.
Yeah, not going anywhere near downtown that day.

Anyway, what's going on?
Jesse Rogers tells us that cell and Wifi at Wrigley will be improved this year which is awesome.
More concession stands, cool.
And the dugouts will be moved almost 30' towards the outfield to make room for the new luxury 1914 Club behind home plate.
There's got to be an emoji for my response to that, but maybe it won't be so weird.

Justin Grimm got let go.
Sure to be picked up soon.
And now Dillon Maples, Justin Hancock, and Randy Rosario are all on red alert thinking they might take his place in the pen.
Awful for Grimm, but can you imagine being one of these guys?
Somebody's gonna step up.

Okay, gonna buy a corned beef and get it ready for tomorrow.
Have a happy one and Go Cubs.