It's the BEST time of year for At Bat, Cub Fans.

At Bat. It's the greatest app for the end of Winter.
Did you have yours on yesterday when Willson Contreras and Anthony Rizzo hit back to backers?
No, it doesn't count for stats or wins, but maaaan... does it ever count for my poor baseball-deprived heart.
When this happened, Len Kasper and Ron Coomer were talking to Jed Hoyer, and Willson's homer "interrupted" the chat.
Len had to call the call and after, he apologized.
To which Jed said, "Interruptions for home runs are always fine."
Yeah, they are.

If you look here on ESPN and search down the headilines (and they haven't changed it yet), you'll see that Ian Happ doesn't just play center field or second base for the Cubs.. he's also playing college basketball for the Wisconsin Badgers! 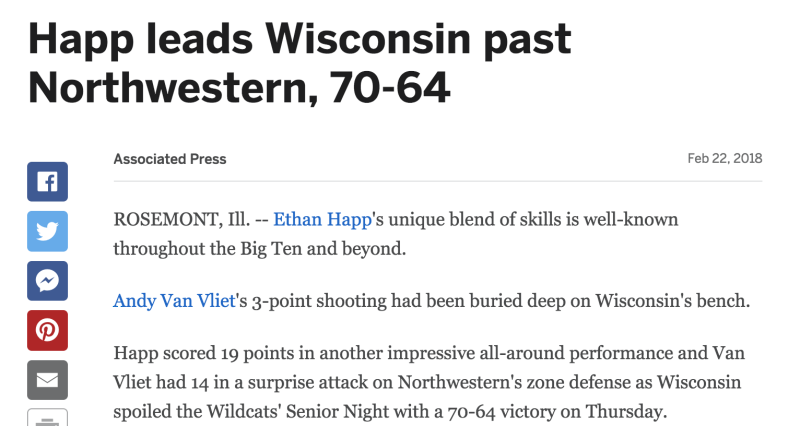 But hey, judging from Happ's performance on the field, there's no reason to think he's not a killer basketball player too.

I am so bummed about Ben Zobrist's back.
Not a good way to start after all the health talk during the off season, but I hope he doesn't try to get out there too soon.
Heal that thing, dude.
Everybody knows you can play.

Jesse Rogers has a nice Joe Maddon article on the 6-trips-to-the-mound rule change.
Joe's not concerned about people stealing signs, he's concerned about communication.
And Willson Contreras has two new guys to learn to communicate with, so yeah I get that alot.
And you can find how long the average game lasts ("The average time of a nine-inning game was 3 hours 5 minutes last season, about 14 minutes longer than the average game in 2010."), but I cannot find anywhere... on average, what was the actual time spent on mound visits during a game?
They're supposed to last 30 seconds, plus the walk out and back... I'd really like to know.

Okay that's all I have.
The game today will be 2:05 on your At Bat app.
Tuesday's 2:05 Central time game vs the White Sox will be on TV, WGN, with Lester on the mound.
Cool. 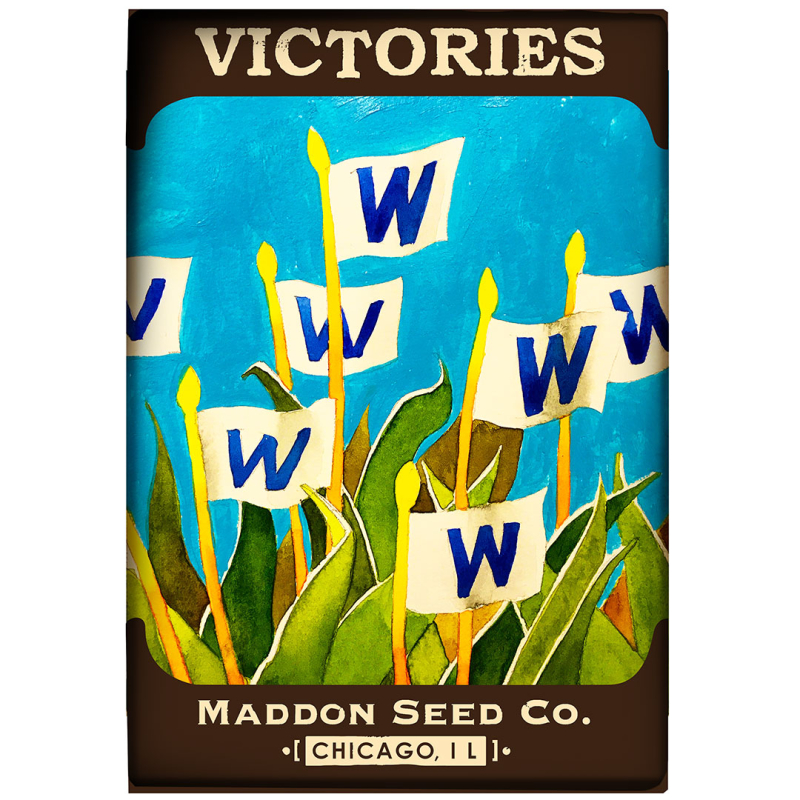 It's still Winter gray filth snow here in Chicago, but with today's Cubs vs Brewers game at Maryvale Baseball Park in Arizona, my heart goes right to Spring.
I've always done some kind of "seed planting" illustration this time of year, but the difference any more is... it's true.
The W Flags, I mean.
Not being jinxy or bragging, the Cubs are just gonna be really really good this year.
Our crop of players aren't just seedlings any more.
They're all getting older and wiser and closer to their prime.
LIke Javy Baez is 25 - what if this is the age he decides to mature?
Become more consistent.
So whoever's pitching him won't just worry about making a mistake, but actually worry like, "Oh my god, NOT BAEZ!"
Anthony Rizzo, besides being one of the best examples of a living being on our planet ever, Rizzo's gone 32, 31, 32 and 32 homers the last 4 years.
We're used to that, like it's just regular Rizzo.
When in fact those are astonishing numbers. He's already got 166 dingers.
It's possible that in 4 years he'll hit his 300th homer.
He'll be 32.
Every pitcher in baseball is thinking... what if Kris Bryant is better.
Better than that MVP Kris Byrant.
It's SO AMAZING that the Chicago Cubs have guys who, when they step up to the plate, they're the guys everyone (even fans of other teams) have to stop doing whatever they're doing and watch.
What about Kyle Schwarber?
I didn't just say "What about Kyle Schwarber?" like a normal thing.
My eyes bug out like Barney Fife when I ask that question. This is supposed to be a post about Spring so how come I'm covered in goosebumps? 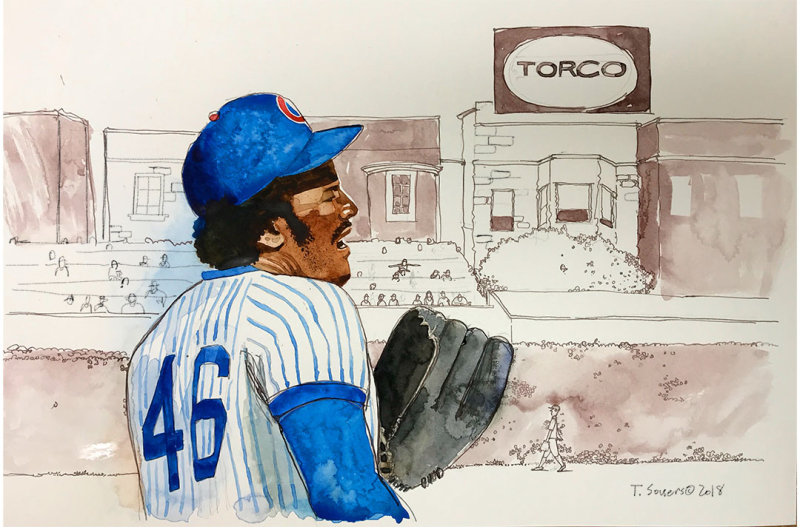 I loved Lee Smith.
So dominant, bigger than life kinda figure.
Before Lee Smith, for closers I can only remember Bruce Sutter.
After Smith, it's weird but closers are always such characters.
Antonio Alfonseca with the extra finger, the always sweaty and hard working Joe Borowski, the incredibly disliked LaTroy Hawkins, Kyle Farnsworth with the perfect form tackle and ass whooping of Reds Paul Wilson.
I was at Wrigley when Mitch Williams, with his insane falling over delivery, took a SCREAMING line drive off his temple that made a noise I could hear all the way in the left field bleachers.
I thought he was dead.
Then he got up and argued with Zim to try and stay in the game.
I went from almost hurling to laughing with everybody else.
Anyway, Lee Smith.
18 years in baseball, the first 8 with the Cubs.
One thousand. Two hundred. And fifty one strikeouts.
487 saves.
But I remember bad Lee Smith, too.
Drove me insane.
Never a sure thing like you could just relax when he came in.
More like sitting in the back seat of a car that just hit some black ice.
He had a bad 1987 with 12 blown saves and GM Jim Frey traded him to Boston for Calvin Schiraldi and Al Nipper.
Yeesh.


And.. the Torco sign.
I ain't lookin' it up and prefer that it always be a mystery company or brand or whatever it was.
When I was little my Dad was in the Air Force, and he always insisted that we not live on the air bases but rather, we were constantly buying houses and selling houses.
We were stationed in Hawaii for 3 glorious years, and when we moved sold our house (which was on a lake and a short drive to the beach) for... $16,000.
Long time ago, but...
I equate the value of that real estate with the location of the Torco sign.
Wouldn't you love to know what Mr. Torco paid to have his sign up for all those years?
Across the street but basically the same place that Anheuser Busch is now actively helping Tom Ricketts pay for Yu Darvish or Anthony Rizzo.

Gotta run.
U.S.A. Women's Hockey rules!
And... 2:05 tomorrow the Cubs will play game numero uno of the Spring of 2018.
Here is the Cubs broadcast page.
Please deliver me, even for a couple hours, from this weird yucky winter.
Go Cubs.

Let that gif play for a bit - it's 4 seconds per year, with a couple spent on '14 because there were so many changes.

Man, what a difference 8 years makes.
This is super simplified because there were SO MANY other changes, but basically:
Mica Hoffpair to Jeff Baker to Anthony Rizzo.
Aramis Ramirez to Luis Valbuena to Kris Bryant.
Blake DeWitt to Darwin Barney to Javier Baez to Ben Zobrist to Javier Baez.
Starlin Castro to Addison Russell.
Geovany Soto to Wellington Castillo to Miggy Montero to Willson Contreras.
Alfonso Soriano to Junior Lake to Chris Coghlan to Kyle Schwarber.
Marlon Byrd to Brett Jackson to David DeJesus to Justin Ruggiano to Arismendy Alcántara to Dexter Fowler to Jon Jay and Albert Almora and Ian Happ.
Kosuke Fukudome to Tyler Colvin to Nate Schierholtz to Jorge Soler to Jason Heyward and Ben Zobrist.

That's such a crazy shift of talent it boggles the mind.

In October of 2009, the Ricketts family bought the Cubs from slimy satan-man Sam Zell.
In 2011, Theo Epstein was hired.
In 2015 the Cubs won the NL Central and have been one of baseball's elite ever since.
And I'm gonna go ahead and say this weird off-season with the Cubs ending up getting Yu Darvish is kinda similar to the Expos Pete Rose hitting a line drive off Lee Smith's back, the ball bouncing high into the air and into the hands of Larry Bowa who throws to Leon Durham to double off whoever the runner was on 1st.

Hey you know what I just did?
Looked at a box score for the first time since ohhhh... last October.
Try it.
IT'S SO MUCH FUN!

It was also fun to read that Mike Montgomery said, "...I want to be a starter, but, look, being a part of this team the last couple years, it's a special group, and we not only have a good team, but I've never had more fun playing baseball.”
Also cool seeing that Joe Maddon's gonna have Ben Zobrist and Ian Happ play a little 1st base.
At-bats this year are gonna be hard to come by for some of the Cubs, and if you can rest Anthony Rizzo a tad bit more, well that's just smart.

In 4 days the Cubs will play the Milwaukee Brewers in their first game of Spring.
After typing that, I have goose bumps and out loud I'm making "Nuh nuuuh huhhuh nuhhh" noises.
Luckily no one's around.

Lastly, I put this up on Twitter last night.
SO miss him. 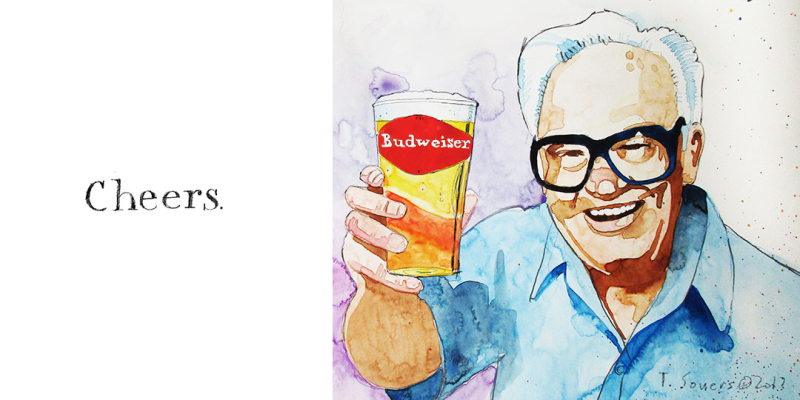 Dillon Maples. What an intriguing pitcher. It's nice when one of your firemen has a name that rhymes with "chillin".
Talking about Dillon Maples.
We got to see him very briefly last year.
But he had an incredible journey up through the ranks of various Cubs minor league teams and ended up in the Bigs with last year's September callups.
This was after being basically injured from 2014 - 2016, the end of which he almost quit.
But instead, he went from... well maybe you remember this illustration from last year: 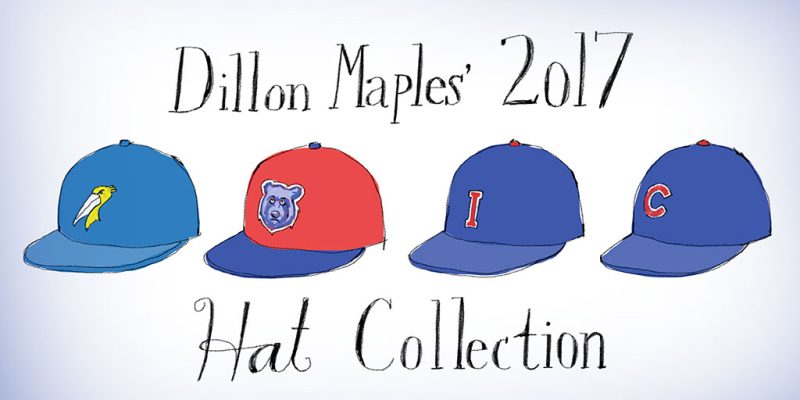 That's alot of hats for one year in the life of a young pro ballplayer.

He only threw 5.1 innings and he got rocked by the Pirates when he gave up 5 runs and got only one out before being yanked.
But he also struck out the side vs the Cards and Rays, and had 11 total Ks out of his 16 total outs.
You'll take that, right?
But he also walked 6.
So, super teeny sample size.
But since it's the time of year to be Optimistic, I choose to think man, what if?
He just might turn out to be a big deal in a bullpen that ought to amaze us.

Hey, did you know that pitchers and catchers reported to Mesa yesterday?
It's true.
They did have their first workout, but today they' ought to be doing stuff besides catching up.
It's so incredibly awesome.
K gotta run.
Go Cubs.
Go Chillin' Dillon. 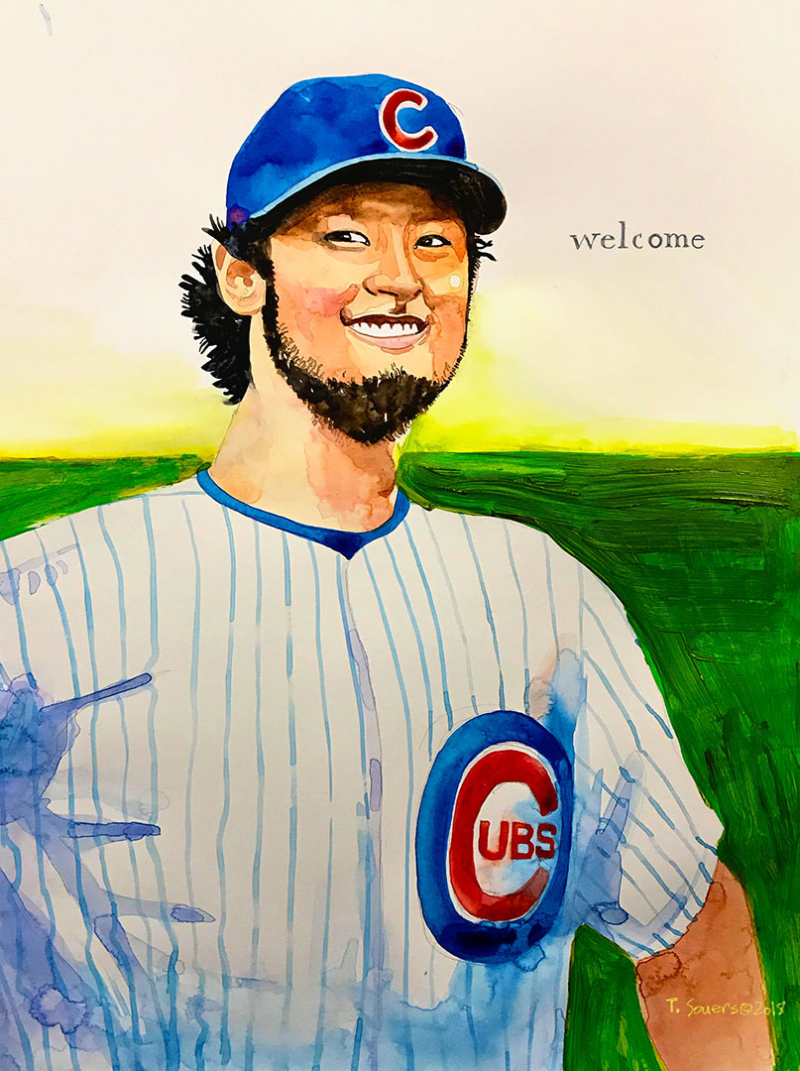 How come I was surprised?
I think we all knew this was gonna happen.
Why did this little note send me into a full on freak out tizzy texting joy screamer weirdo?

I was spending all my time day-nightmaring about 2019, and how the Dodgers and Yankees will spend LIKE MADMEN during the offseason not caring about any silly tax but just acquiring the Harpers and Machados and Blackmons and creating historically monster teams that no one could compete with and then... oh yeah.
I forgot.
MY favorite team is the Chicago Cubs, home of Theo Epstein and Jed Hoyer, the smartest guys in the room.
And I fear nothing.
Lester. Hendricks. Quintana. Chatwood. Darvish.
Oh man, that's quite a change.

I don't care about the 6 years.
I care about winning another series in 2018.

Okay, last thing.
Jake.
He's not in the plan any more.
I wish all Cub Fans across the world could stand and give him a standing ovation for all he did as a Cub.
Historically excellent.
A year across two seasons of historically dominant pitching.
Thank you, Jake Arrieta.