Didn't get to see enough of Jose Quintana last year. I CAN'T WAIT.

I can't put a reason on it, but some guys come to the Cubs in a trade or acquisition and they just aren't themselves.
The most glaring example last year was Justin Wilson.
Supposed to be really good.
With the Tigers, "He took over as closer and has saved 13 games in 15 tries with a 2.68 ERA, 0.94 WHIP and 55 strikeouts against 16 walks in 40 1/3 innings."
With the Cubs, he immediately didn't look comfortable and stunk up almost all his time here last year.
I expect him to be good - the Cubs gave up Jeimer Candelario for him, so....

Conversely, Jose Quintana started out with a bang.
Goes 7 innings, strikes out a dozen Orioles and the Cubs win 8 - zip.
Ends up 7-3, goes 2-0 vs the Cards and throws 190.2 innings combined with his time with the Sox.
But even with those fab numbers, he felt a teeny tiny bit uneven.
Like, a dinky bit.
Miniscule.
And I attribute that to just first year oddness coming to the Cubs (especially coming from the Sox at that point in Sox history).
Now, I cannot wait to see what he does with a full season in his new home and that little bit of Cub Time under his belt.
He'll be fully rendered, like I promise to do with the attached painting.

Okay Hot Stove.
Everybody says it's a cold hot stove season.
I disagree.
I imagine a hot stove that's been overloaded with wood, and the heat is expanding inside and soon enough, she's gonna blow.
Let it happen this week, please.

This is probably SUPER OBVIOUS to you, but whatever I'm just the art guy...

The timing is perfect... not for you, but for Yu.
Last week, the Brewers and Yu Darvish made it super public that they have a formal bid on the table for the pitcher.
You and I are thinking... so?
There are still 6 teams or so all in on the guy, so what, Brewers?
Well then they went and signed Christian Yelich and Lorenzo Cain.
That improved their outfield in a frightening way with 2 players each with a 2017 OPS better than any of the Cubs except Kris Bryant and Anthony Rizzo.
And in that new line-up they might hit before Braun, Shaw and Thames (good for 79 homers last year).

The Brewers did that?

That's more than annoying.
It's really unexpected big time stuff.
Plus... think back - had Brewer ace Jimmy Nelson not gone down in early September last year, the standings would have been a LOT closer than 6 games.
So now, the pressure is on Theo, right?
Because IF the Brewers sign Darvish on top of all that, Theo will look out-smarted, the Brewers will get HUGE headlines, and even more important is how much better they'd actually be.

So Yu's leverage went... up.
At least with the Cubs.
And I still fully expect the Cubs to sign him.
Which means he'll SURELY go anyplace else, but whatever.
That's hot stove.

Sorry I don't have a painting - work is koo koo.
But here's an appropriate gif for this time of year. 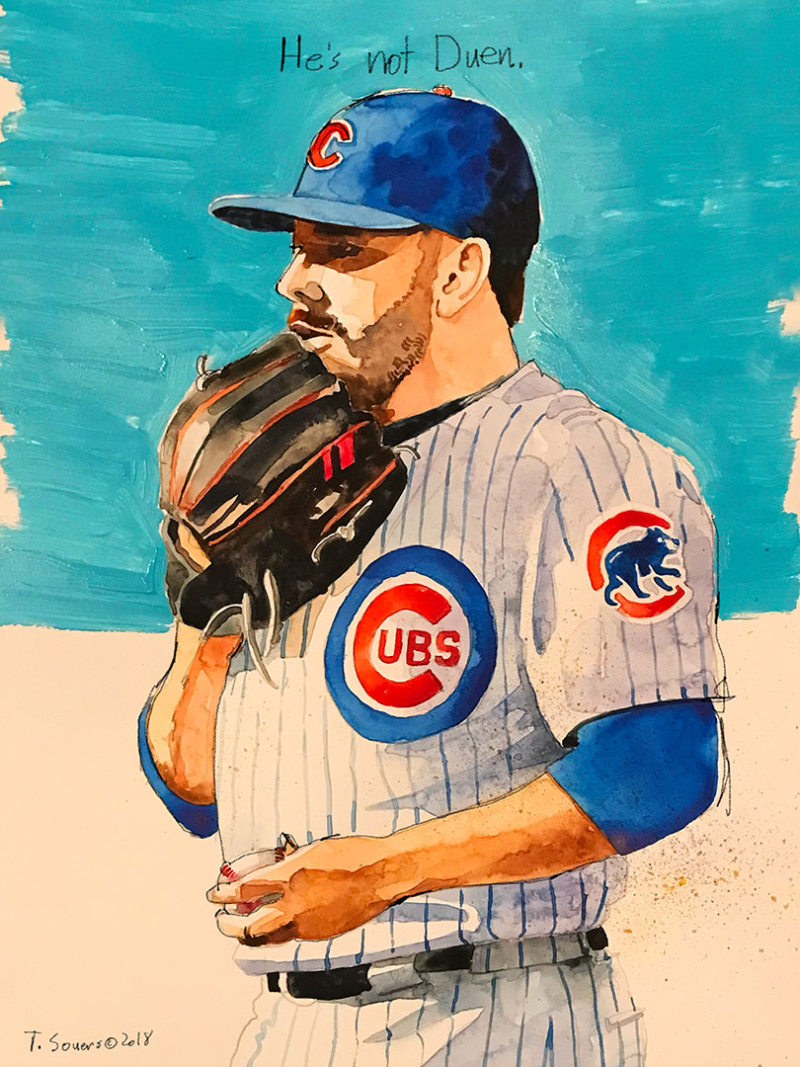 Just finished this painting this weekend, sorry so late.
But this was awesome news, the Cubs re-signing Brian Duensing to a 2-year $7 mil deal to hopefully come back and be the super solid 2.74 ERA lefty holder bullpen guy.
It's weird, but he's one of those guys who doesn't jump out at you.
Like... a pretty quiet and a go-about-his-business kinda guy.
Then again, we've all seen these dancing clips a million times (now sure which one he is, but he's in there I'm sure).
So obviously he likes to have a little fuen.
He rarely gives up the home ruen.
He likes to play under the suen.
He pitched in sixty eight games but only wuen uene.
To borrow a line from Roger Miller's "Dang Me", his pappy was a pistol he's a son of a guen.

Whoa.
Somebody slap me.

Ummm...
The Cardinals traded Randal Grichuck for the well-traveled reliever from Seatte/Arizona/Toronto and now St. Louis, Dominic Leone.
I know the guy was inconsistent, but I'm glad to see Grichuck go away.
He seemed to hit homers at some pretty inconvenient times for us Cub fans - he hit SIX off Cub pitching just last year (twice as many as Kris Bryant hit against the Cards).

Spring training starts in about 3 weeks.
THREE WEEKS!!!
The big headline at MLBTR is that THE BREWERS OFFERED A CONTRACT TO YU DARVISH!
Which seems like a whole buncha hooey because there's just nothing going on with the free agent signings, but maybe it'll spur some kinda action.
I think we've all been just bored with the lack of FA movement, but that's really starting to change to anxiety the closer we get to Spring Training.
However, I'm trusting Theo and Jed to be calm and do something smart rather than trusting my panic to HURRY UP AND DO SOMETHING.
Because that's the Cubs Way.

Lastly... while I'll always hate them, it was sad seeing the Vikings go out with a whimper last night.
And Tom Brady.
I'm pretty sure we won't see another one like him ever.
Never. Bet. Against. Him.

Gotta get this day going now, but first you should check out this Instagram account.
It's called "What was breakfast".
It's so simple and cool - he goes around the city, takes fabulous portraits of people on the street, and asks them what they had for breakfast. 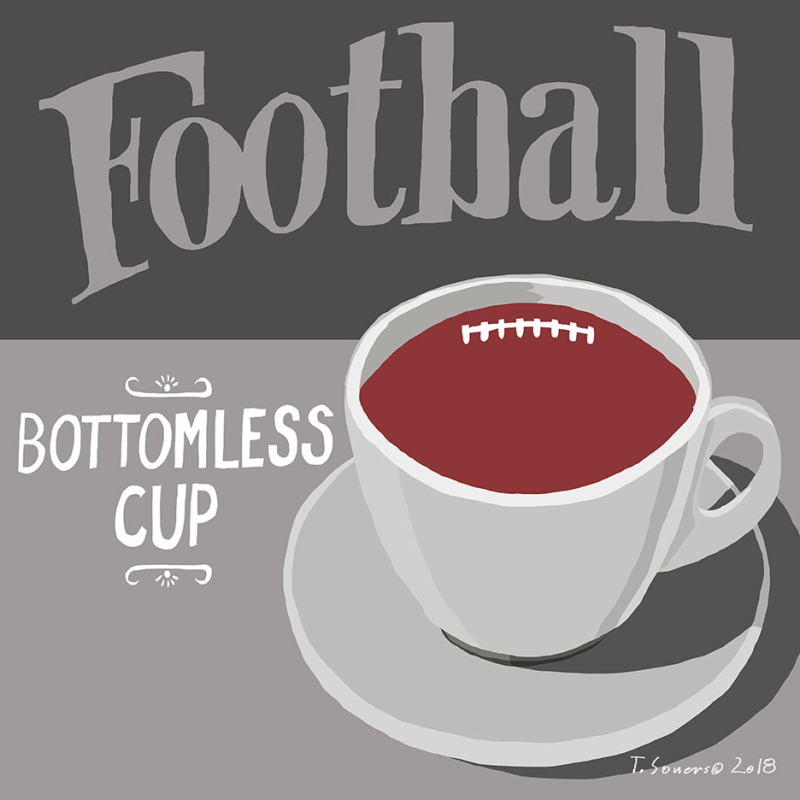 Man oh man, yet anOTHER Football Championship Sunday without a Bear in sight.
But whatever, it's rainy and cold and crappy outside and there isn't anything better than settling in to watch.
The Tom Brady hand with the (it's a cut so probably bloody) glove has been so hilarious, but now he's gotta actually play rather than try to dodge the "how come you're wearing gloves inside?" questions.
The Jags were "headed toward being a double-digit underdog" until the mysterious injury happened, now it's closer to a td but whatever.
Brady's not going to miss this game and I cannot imagine the Pats losing.
The more interesting game will be the Vikings vs Eagles.
Casey Keenum vs Nick Foles.
Of course, should something happen to Keenum, the Vikes have Teddy Bridgewater (EDIT: the Vikes made Bridgewater inactive for this game so the backup is actually Sam Bradford) on the bench.
While the Eagles have um... Nate Sudfeld.
Earlier, when the Eagles just ruined the Bears with Carson Wentz at QB - seriously didn't you think oh man, nobody's gonna beat these guys?
Such a shame, his injury.
Oh well, gonna get some stuff to make pork tinga instead of chili and watch my bottomless cup of football.

Impatience over this Hot Stove inaction is matched only by Epstein's patience with it.

You are getting sleepy. SLEEEEEEEEPY.
When Theo Epstein snaps his fingers, you will wake and the Cubs will introduce their next starting pitcher...

Everybody including me has been semi-freaking out about the lack of Hot Stove action this winter.
And... we're fans and we don't really know what's going on so it's well within our card-carrying rights to shout about it.
But underneath it all I think we also understand that Theo and Jed are gonna do what's best for the Cubs, and if it takes having more patience than Scott Boras then so be it.
Still, I have no doubts that the Cubs will, before Spring Training, have that last starter signed and in the rotation.
Because our favorite team was so successful with it's plan to "re-set" (or "tank", whichever you prefer) in 2012, I don't feel like I'm allowed to gripe about all the other teams who appear to be doing the same thing. Which is at least one of the reasons there's such a glut of the top free agents - if you're tanking, you're not gonna spend $$ on those guys when you can put it in your pocket and spend it later when you're anti-tanking.

Then there's next year and THAT class of free agents that includes Bryce Harper and his giant suitcase of Cub rumors, and what do the Cubs have to do to get him on the team... makes your eyes roll back so you're looking at your own brain.
Yeah it's a crazy thought seeing Harper in the Cubs lineup, but I'm gonna wait until I see what happens this next season.
The stuff that Kyle Schwarber is doing to be in the best shape of his life is incredible and inspiring.
At a restaurant the other night I even got the fish.
What if young Kyle finds that stroke and actually gets maybe 15% better fielding in left?
I may take a look at the team and just think hey - next year's Hot Stove may still be more about pitching.

I told you I've been sick.
Odds are, from what I understand, that you may be too.
So this whole last long Martin Luther King Day weekend, the only noises I made were coughs and nose blowing and sips from drinking hippie tea.
Until the last play of that Vikings/Saints game which I assume you've all seen.
I HATE the Vikings.
They're not the Packers, no, but still.
If you watched that live, I'm sure you made some loud noise too.
Never seen anything like that.

Okay gotta run.
Fingers crossed on either Jake or Darvish or Cobb.

Kris Bryant and the Cubs floated out a number to each other indicating what each thought Kris's services were worth.
Somewhere in between the two was $10.85 million dollars.
Which is what they agreed on.
And as usual with our Mr. Bryant, he set a record that beat Ryan Howard's $10 mil back in '08.
Super.
Cool.
Also super cool: the Cubs reached agreement with Kyle Hendricks, Addison Russell, Tommy LaStella, and Justin Wilson.
The only arbitration eligible player left is Justin Grimm.

The Cubs Convention starts... I think it just started.
(I'm sick as a dog and have been for awhile, sorry.)
Man would it be cool to see how svelte Kyle Schwarber has gotten with the real serious training/diet thing he's been doing.
Also cool to listen to what's on Theo Epstein's mind lately.
Like another starter.
WHAT IF HE HAS A SURPRISE GUEST NEW STARTER SHOW UP?!
Ahhh, it's all a bunch of fun and maybe there'll be some actual hot stovey type news come out over the weekend.
I'm gonna go back to bed and watch this thing.
Go here (it's NBC Sports Chicago), put in the name of your tv provider, user and password and watch Cubs Convention live.
Or just follow NBC Sports Chicago on Facebook and watch it there.