A history of "I hate the Astros" pages from Cubby Blue.

Okay, I've had enough of how awesome and dynasty-like this new Houston Astros team is.
So I thought I'd revisit my own personal dislike of this team from back when they were in the NL.
If you're too young to remember that, well... the Astros, to me, for whatever reason, were the team I despised more than any other.
Even more than St. Louis.
In 2005, the Astros and the White Sox played in the World Series - the whole thing was just revolting, and I couldn't help but be reminded of that this year.
Anyway, here:
This is from 2012, their last year in the NL. 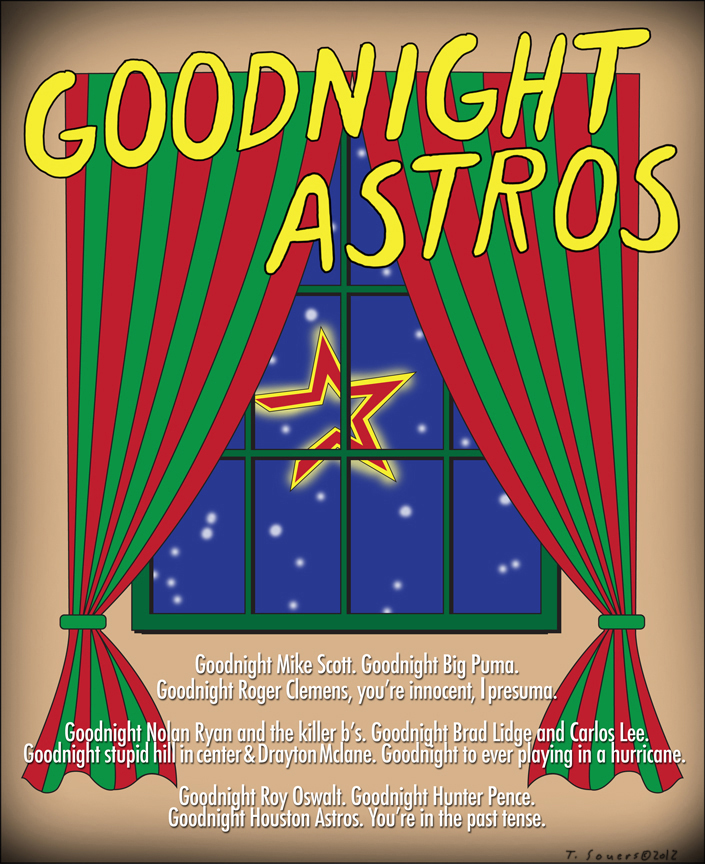 This one's from 2010 - I can't find them all.
Jeff Bagwell got a job as their batting coach.
Like I needed a reminder of the "Killer Bs". 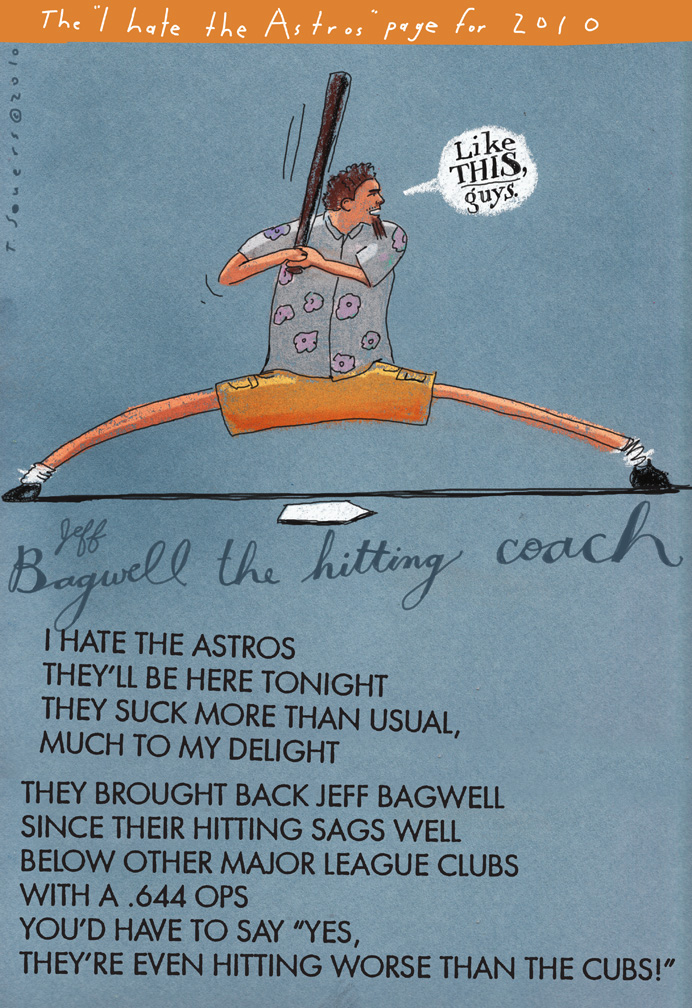 Remember Jose Valverde? Could not stand that guy. 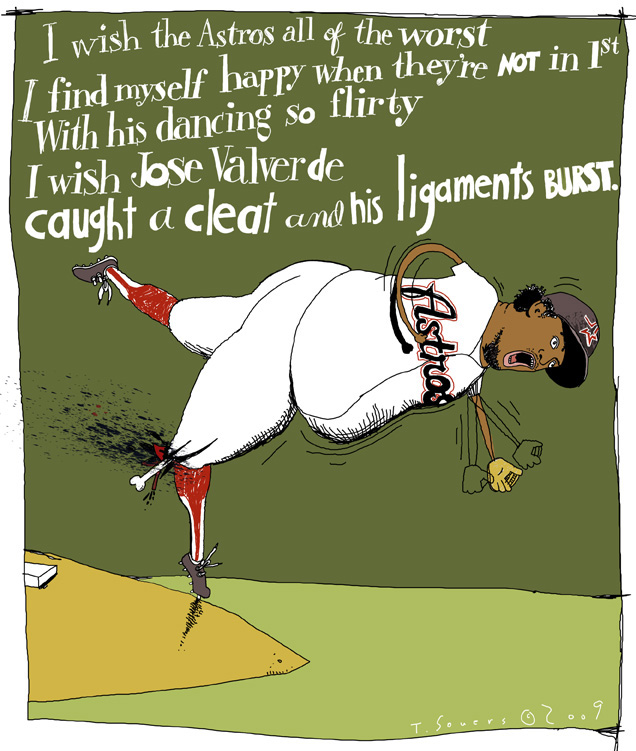 Another one from '09. Roy Oswalt.
Note: I've since learned that the grammar should be: "If Roy Oswalt were a snail..."
But I still can't bring myself to talk like that. 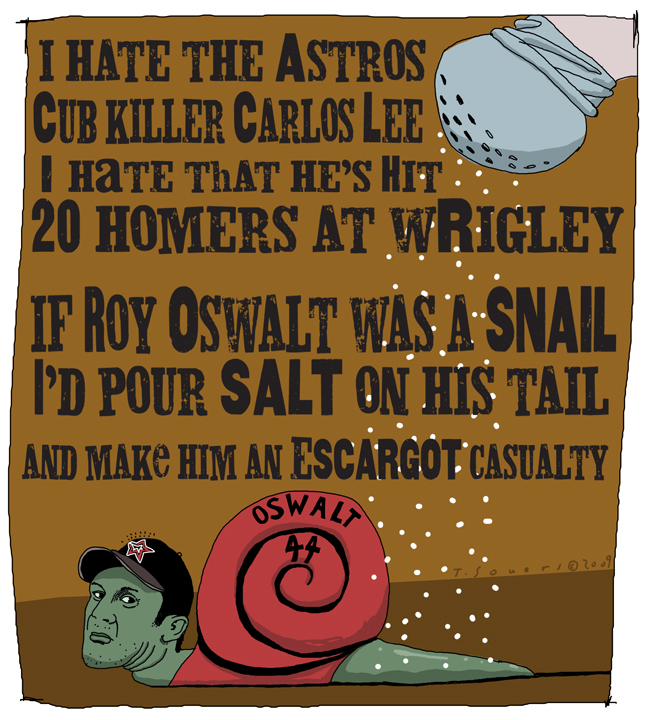 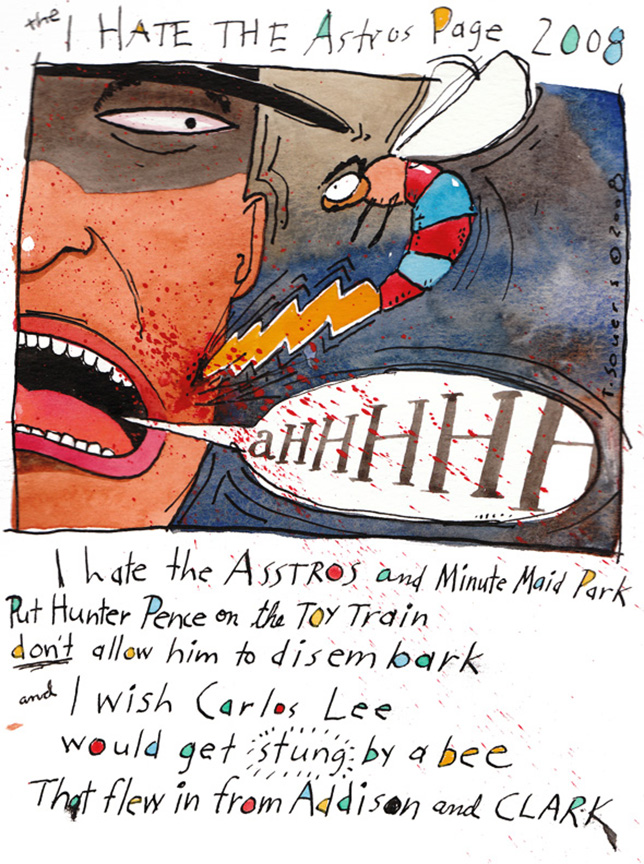 This is, I think, '07.
Right after a game where Lance Berkman ducked out of the way of a pitch, the ball ticked his bat which made a sound, and then he rolled around on the ground like he'd been hit in the head.
The ump gave him first base.
What a coward. 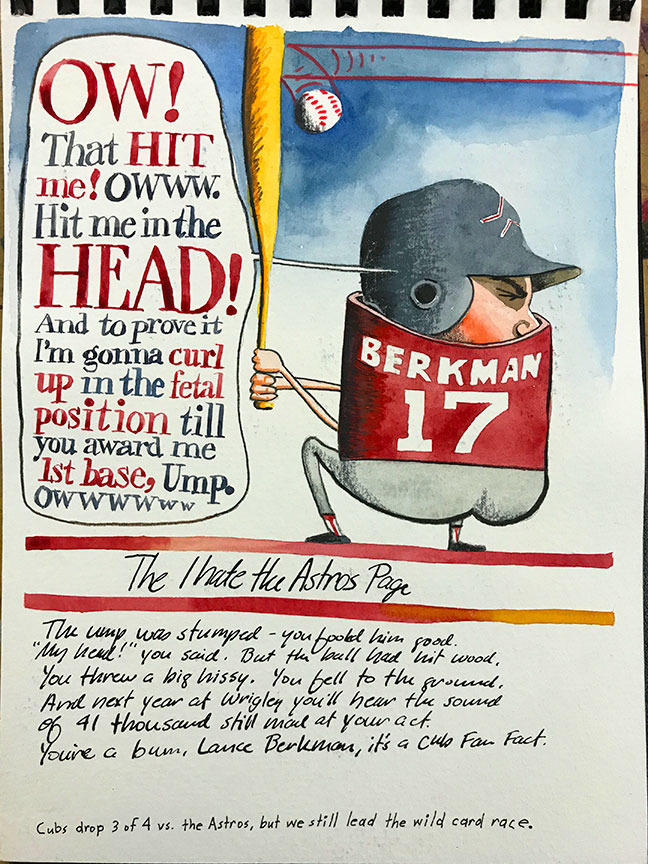 Here's the one from the 4th of July, 2006. When they had Roger Clemens, one of my all-time favorite human beings. 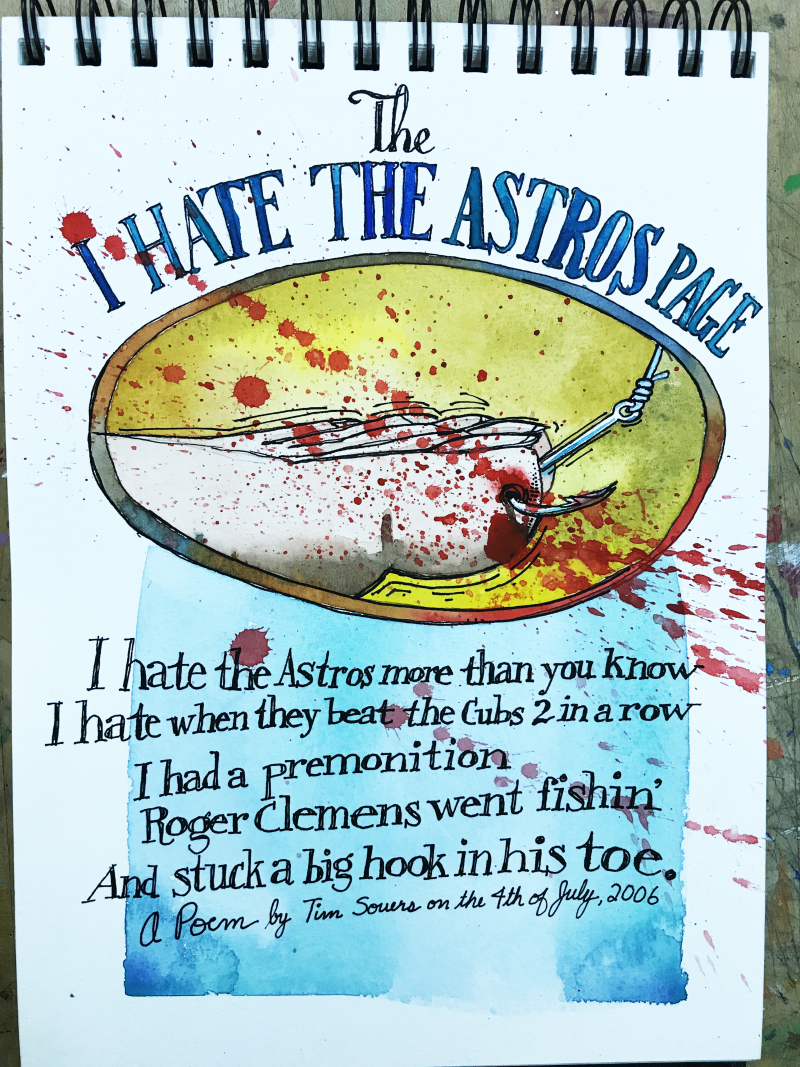 And this one was my first "I hate the Astros" page.
2003.
The Killer B's were still a thing, Jeff Kent had just come from the Giants, I HATED their stupid park with the train and the hill in center. 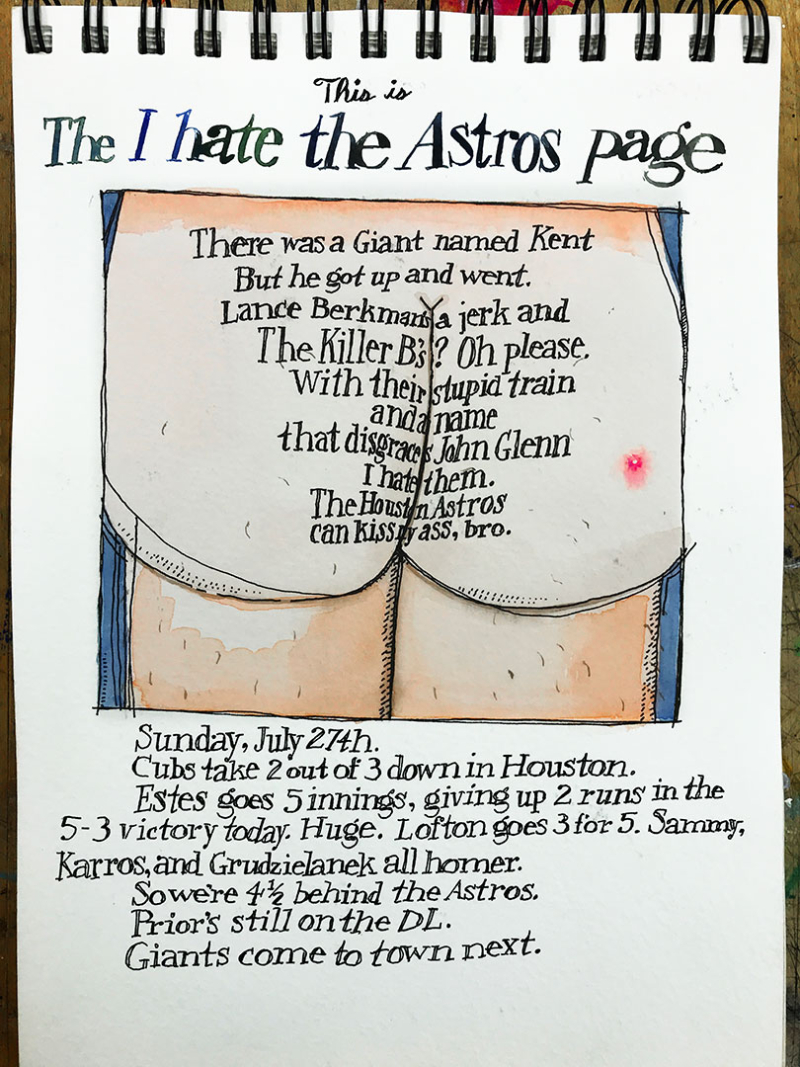 But all that said... oh MAN! How much would you love a Cubs/Astros World Series?

Baseball juice. Is it good for you? 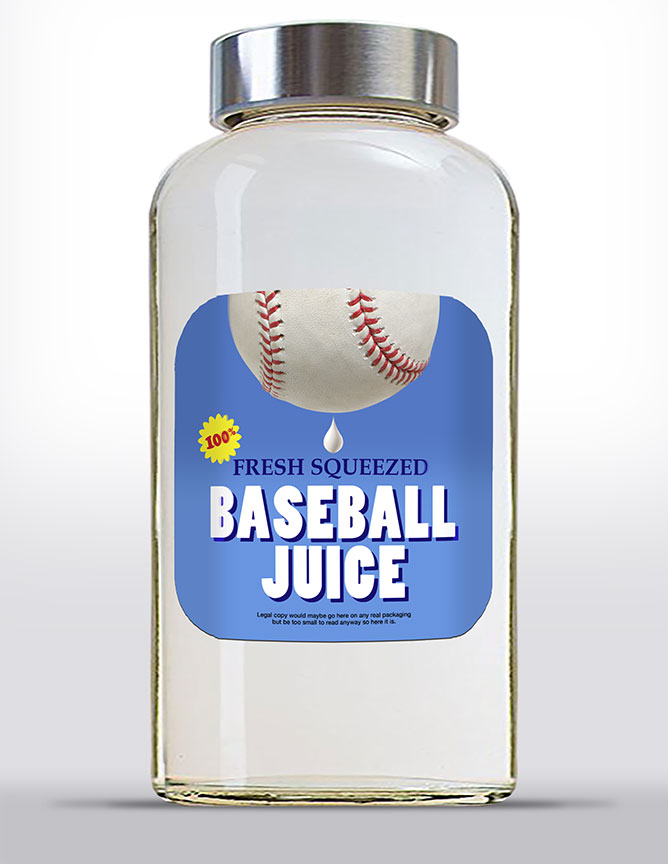 World Series Game 5.
7 home runs.
That was like watching a video game.
I'm not a conspiracy guy and I don't really believe in "juiced" baseballs, but it's so fun to imagine during the season...
A mysterious phone call - the one from the burner phone that only happens once or twice a week.
Because if it happened more than that, there'd be a third more homers across the board making it way too obvious.
Then, average looking white rental vans loaded with boxes of ordinary looking baseballs are brought to each ballpark where a game will happen...
Verbal passwords are passed between guards and drivers, vans directed to "catering"...
You could really write that up.

Game 5.
SO MANY people have said to me oh my god was that not the GREATEST BASEBALL GAME OF ALL TIME?
(Um, of COURST NOT.)
But 7 homers and about 27 lead changes - for sure there were so many more people talking about baseball than normal.
It was the subject of early morning elevator talk, the stuff you talked about in meetings while waiting for the client to arrive, what your Uber driver brought up that wasn't actually annoying.
Good for the game for sure.
But what a long, boring game it made of Game 7 in comparison.
I swear it took forever to get through inning #2.
But that's where the Astros scored their 5 runs and this one was won - with Yu Darvish stinking up the joint for the second time in the same World Series.
I felt bad for him, but overall I gotta say I took an unexpected amount of joy watching the Dodgers fail.
I'd much rather Justin Turner pause and think back on it the next time he's in a playoff baseball game (perhaps against the Cubs).

Anyway, a pretty awesome Series and congrats to the Houston Astros for winning their first title ever.
More to talk about as we reflect a little more.
But right now, I gotta run.

What the hell does baseball juice look like, anyway?