Well even though we haven't said a thing about it, enough about the 2017 NLDS Game 4.
Put Game 4 in the rear view.
As you may recall, I went to Game 4 of last year's World Series.
While it was MORE AWESOME than ANYTHING to be at a Chicago Cubs World Series game, it was kind of awful baseball-wise.
But you know what happened in Game 5?
I think you do.
And there's nobody I'd rather see on the mound tomorrow night than The Professor.
Somebody texted that, while watching the Yankees/Indians game, they saw a graphic that said starting pitchers would be Hendricks and... Max Scherzer.
I don't believe it, but I also fell into the whole Strasburg mold thing like an absolute idiot.
So...
I'm not going to speculate on anything I don't know for sure.
And I know that Hendricks is on the mound and there's a whole lotta hits stored up in some Cub bats.
That's all and all that matters so I'll end it there.
Go Cubs.

I'd like to think about baseball but can't help but wonder what the hell is going on with the Nationals?

You heard Dusty Baker talk about there being mold in Chicago and changing hotel rooms and air conditioning.
And this mold is making the entire Nationals team sick.
(I googled it again, and it ought to show here, but it keeps showing stuff about the Red Sox or something).

So first, I made this cheap joke. 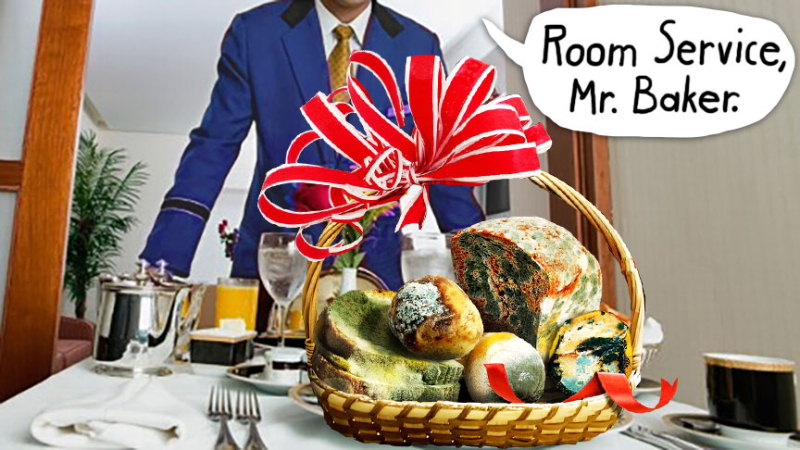 But then... I can't explain it but this is just so wrong it makes me angry.
Read this from the Washington Post.
Stephen Strasburg, who could be pitching on his normal rotation, won't.
Because mold made him feel sick.
Seriously, what the hell is going on?
The Cubs at their worst at least always had players who wanted to play, even if they were named Hector Villanueva.
Ahhh well, I'm gonna stop thinking about it now because there are more important things going on.

Game 4 will happen today at 3:08.
Jake Arrieta will take the mound against, I guess, Tanner Roark.
So I guess it'll be the same lineup Joe Maddon had planned for yesterday, one that didn't include Jason Heyward (he hasn't hit Roark in the past).
What's driving me insane is... what kind of dude is Stephen Strasburg?
What kind of a guy becomes a pro athlete and then doesn't want to compete?
IT MAKES ME SO MAD!
Sorry.
This is just a major distraction and hopefully none of the Cubs are thinking about it.
Because the Dodgers are already resting up and this game is SO important for the Cubs to do the same.
Not looking ahead, or maybe I am.
Because I'm SO distracted.

Pardon my language but fuck you Stephen Strasberg - give me your arm and your youth and YOU go get another job.
You disgust me.

And I'll take that all back if he's truly TRULY unable to go, but after all I've read... doesn't seem like that's it.

EDIT: Either Dusty punked me, or Scott Boras called his client Stephen and said, "YOU CAN'T DO THIS YOU IDIOT. YOU HAVE TO PITCH." 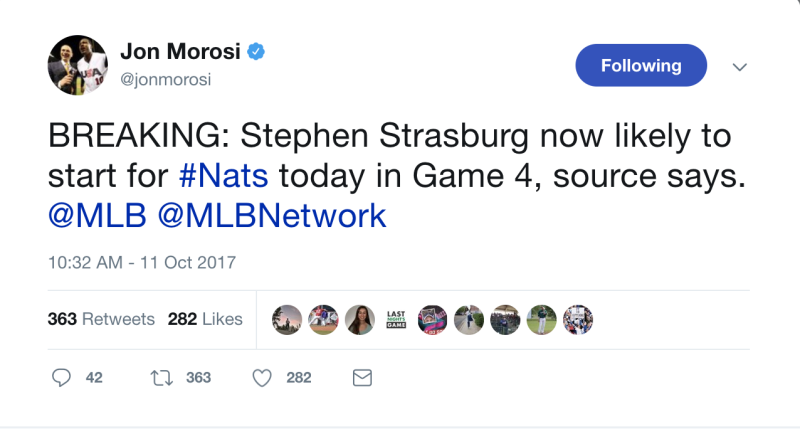 What is it with Ben Zobrist and getting huge hits anyway 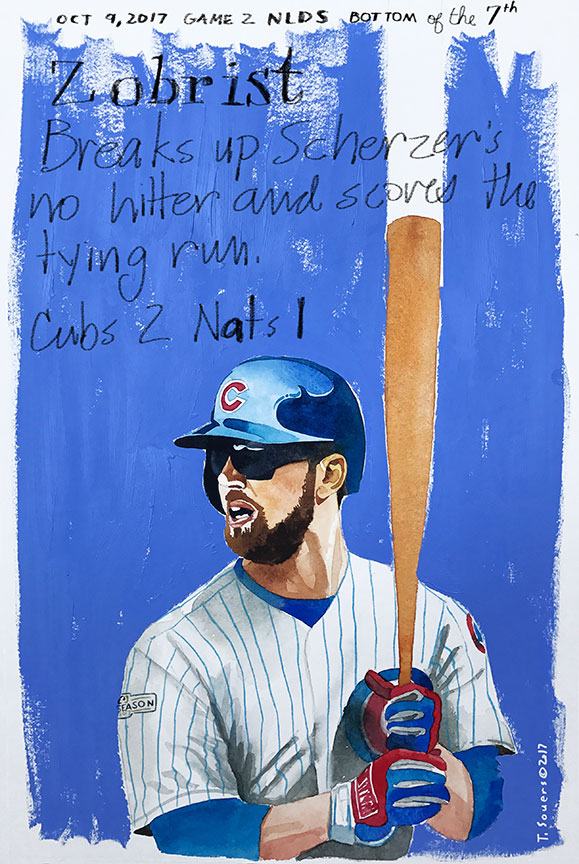 One was reminded of a certain Game 7 and another huge hit pretty much leading to a trophy that reads "World Series MVP".
Ben Zobrist hadn't looked that great.
People were talking about the lame leap at Zimmerman's homer the game before.
The swinging at the first pitches thing.
But Joe Maddon started Zobrist over Javy Baez at second because he liked the lefty bat vs Max Scherzer, and boy did that pay off.
After 6 innings of not a hit in sight (well, Schwarber's foul was close but...), and Contreras starting off the bottom of the 7th with a K, Zobrist came through with a double to the wall that split Taylor and Werth.
A headfirst slide, a Z time out and AHHHHHHHHHH, everything felt suddenly better.
That's when Dusty took Scherzer out, after he gave up his first hit and 98 pitches.
I didn't think that was bad, but then he brought in Sammy Solis which caused Joe to swap Schwarber's lefty bat for Albert Almora's righty, and once again Joe was correctomundo.
Almora lined a single scoring Zobrist and now it's tied and the crowd sounded CRAZY.
I was in my car by now and hearing it for the first time (all the beginning was on Game Day).
Then Heyward with a single so Cubs on 1st and 2nd with one out, and Addison Russell hits one to center that's fielded by Taylor who throws back to first and nails Heyward for a DP.
On a side note, it was not the best day for Cub Fundamentals.
They also had 4 errors, the most since Carlos Zambrano watched everyone in his starting infield make on vs the Dodgers in '08 or '09, can't remember.
2 came on one misplay (that hopefully won't be replayed a million times since the Cubs won) by Schwarber where the ball's in and out of his glove followed by him kicking the ball away as the runner goes all the way to 3rd and would later score the Nat's only run.
Okay so back to the action.
I haven't said how masterful Jose Quintana was.
All the Cub starting pitching has been exceptional, but Q stood for Question and he answered with a gorgeous 2 hits over 5.2.
Strop comes in when he's supposed to and gives up the double that scores Murphy who was on third after the Klye E.
But he keeps everybody else off the bases for 4 outs.
Then, and this is the one I was so worried about, Joe put Carl Edwards Jr back in when the Nat Meat of the Order comes up.
Ground out, strike out, ground out.
Including a huge K vs Bryce Harper, which was HUGE!
Then bottom of the 8th, Anthony Rizzo comes through with his bloop that falls between 3 Nats and scores Leonys Martin from 2nd and then we just had to wait for the final 3 outs from Wade Davis.
Victory.
And we're all pretty smug and confident today, our manager looking like aces while Dusty is eating it in the press.

Today's a cloudy mess and hopefully it doesn't mess with Jake Arrieta's start today at 4:38.
Do NOT need him warming up and sitting and warming up and sitting.
And my hope is he's as healthy as Max Scherzer turned out to be, because Scherzer... this was like beating Johnny Cueto 1-nothin' in last year's NLDS.
As big as it gets.

Oh yeah, this is from last year's Big Double... 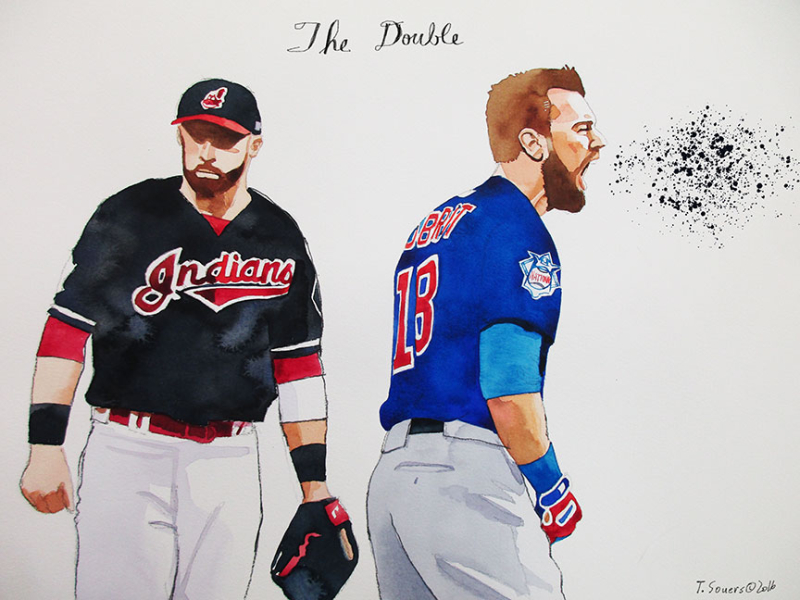 Carl Edwards Jr get back on that horse. 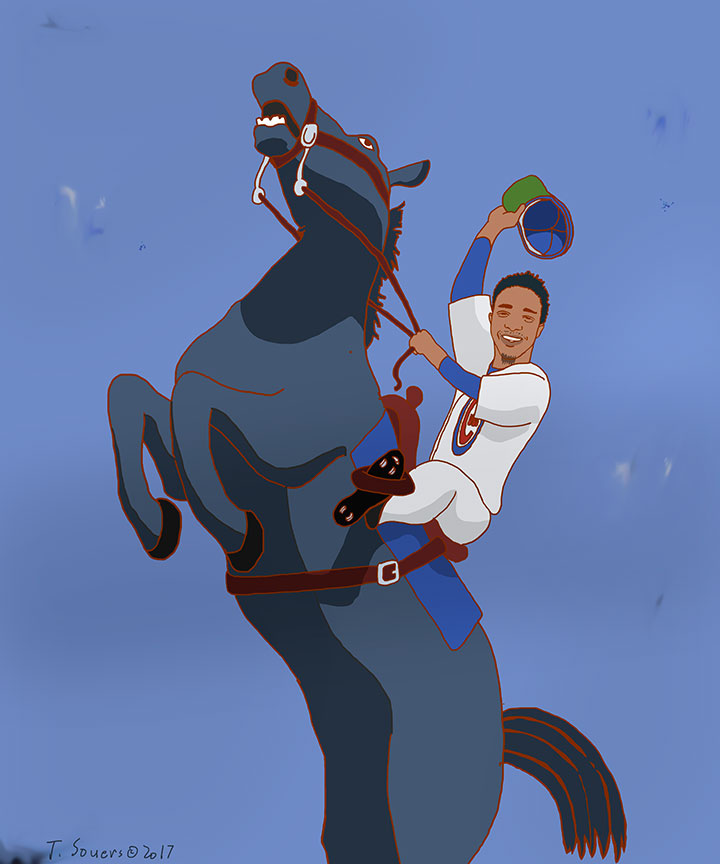 There we were, at the wedding reception dinner, me with At Bat glowing on my phone in front of me on the table.
We were assigned seats at various tables around the room, and my wife and I had never met the other couples at our table.
So I explained to everyone that I was a huge fan and this was a big deal and I'm not being rude (I wasn't staring at it and not joining in conversation) and oh by the way it's the bottom of the 4th inning and the Cubs just went up 3-1 when Anthony Rizzo hit a home run with Kris Bryant on base. 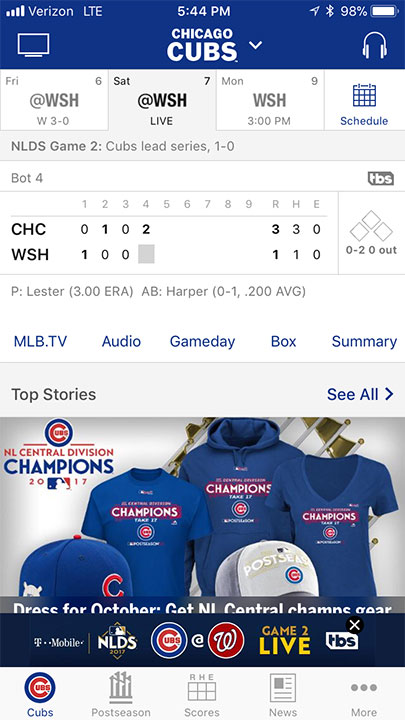 You know those guys - "Bryzzo" and all that?
Yeah, last year's MVP and the first baseman.
Really really good, those guys.
Anybody here heard of Jon Lester?
No?
That's okay - he's the starting pitcher and he's doing an amazing job, shutting down the Washington Nationals who have a really good-hitting lineup.

Then the conversation went back to the wedding and I would glance at my phone every once in awhile.

And then I saw this: 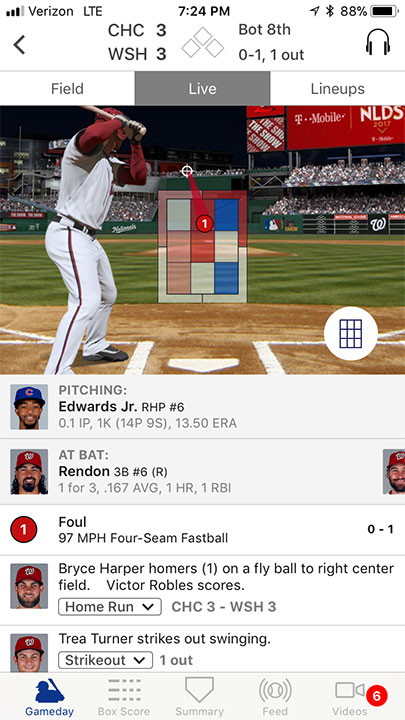 I picked up the phone and read the smaller type.
Oh no.
Not Harper.
Excuse me, I'm going to walk to the bar, can I grab anybody anything?
The woman next to me said no thank you and asked if everything was alright?
I grimaced.
She said I could tell.
I could tell by the way you threw your phone that something bad happened.

I told everyone that the Nationals tied the game.
Bryce Harper hit a homer off Carl Edwards Jr, and that was awful news for too many reasons for to explain.
When I got to the bar, At Bat told me that Ryan Zimmerman had hit a 3-run homer off Mike Montgomery and now it was 3-6 Nats.
The choices were beer and wine, went with beer.
Came back to the table and turned off At Bat and re-engaged with everyone.
There were toasts and speeches and lots of emotion and it was a gorgeous wedding.
But I was also thinking about Carl Edwards Jr.
He's so important.
And I hope that at the next proper moment, Maddon puts him in like he normally would.
Maybe today.
Jose Quintana DID go 9 innings of shut out about 2 weeks ago, but I don't expect that this afternoon.
And we'll see how healed Max Scherzer is.
He says he expects to throw 100 pitches, that he feels that good.
We'll see.
3:08 PM?
It's both miles away and in about 5 minutes.
GREAT GOOGLY MOOGLY.

I got a new computer and of course it's filled with bugs.
Consequently, the art for today can't be finished, but I'll have it later I'm sure.
Last night was as pleasurable a Cubs watch as I've ever had.
The pace and the pitching on both sides were insanely good, but at the end of the day it was clear who the ace was in this game.
Kyle Hendricks.
Anyway, I'm going to a wedding.
Today.
3 hours away.
So comedy will surely ensue as I try to keep track of the game while being in the moment.
I'll let you know. 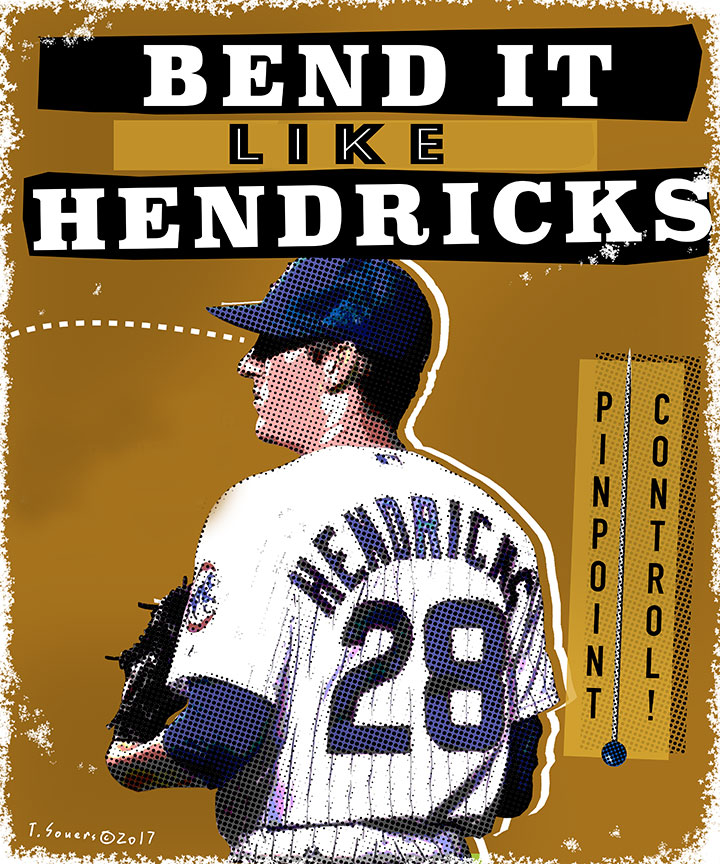 So thrilled with this rotation, and that Kyle Hendricks rightfully starts game one which also means game 5 if it goes that long.
The Cubs will announce the rest of the playoff roster today.
If there's any question at all about Arrieta, they'll add Lackey.
Maybe even if Arrieta's perfectly fine they will, too.
Rotation goes Hendricks, Lester, Quintana and Arrieta.
I was getting some takeout tacos last night at Cochinita (I SWEAR they have one with short rib and kimchi and it's INSANELY GOOD), and they had ESPN or the news on.
They brought up Scherzer and showed him throwing in the outfield, and I gotta say he didn't look like he was using his leg to push off at all.
All arm.
I mean, I'm not a Scherzer expert and don't know... maybe he throws like that all the time or maybe he wasn't supposed to be pushing off but he looked weird.

Anyway, Washington will announce their rotation today, but I don't care.
Just bring it.