Cubs 7 Nationals 4. Davis Ks Harper to end it with a wicked curve.

New Cubs catcher Alex Avila said it.
"The last curveball [from Davis to Harper] was an unbelievable pitch and pretty nasty. It looked like a fastball out of his hand, and it just kind of fell off the table and perfect location, down and away, looking for that swing and miss. You couldn't have asked for a better pitch."
I was with an old buddy, Matt Flynn. 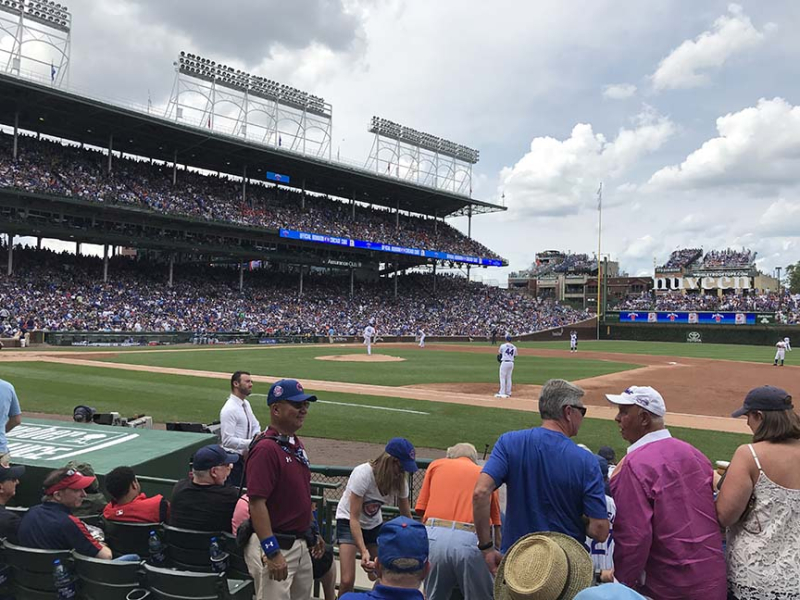 We had AMAZING seats (THANK YOU JOE TAYLOR), 9th row about even with Anthony Rizzo, so we were able to see Davis' pitch just disappear under Bryce Harper's bat. And you could tell from his swing that what Harper thought was one pitch was actually another.
Great way to end a great game on a great day at Wrigley.
Didn't start so great, with the Harper homer off the Bud sign in right and, you know, the giant groan that comes with every homer John Lackey gives up, but really he was pretty dang good.
3 runs over 5 innings vs the Nats - every time another NAT comes to bat you marvel at the numbers.
But enough about them.
Well, except they had Edwin Jackson on the mound and what happened in the first is kinda what you thought - Cubs score 4.
Jon Jay doubles and so does Kris Bryant.
1 up.
With Bryant on 3rd, Willson Contreras hits a weaky off the bottom of his bat that works like a bunt and... Jackson looked at the ball like it was a mean little animal he was kinda scared of.
Bryant scores and Contreras is safe.
Then Avila hit a loud 2-run line drive homer - his first as a Cub - that just baaarely cleared the fence but trust me he hit the snot out of it.
Contreras continues his monster hotness with another homer and another 3 RBIs. And he made a fab running catch out in left, where Joe put him because monster hotness.
Yeah, the 9th was a little nerve-racking.
When Davis walked Jose Lobaton, everybody looks over at the Nat lineup on the Bud sign and yeah, Harper is lurking.
Then Davis walks Brian Goodwin and now you know Harper's gonna come up unless the next guy, Wilmer Difo, hits into a double play.
There was a guy behind us who was doing a pretty good Ron Santo WHOAAAAA NOAAAAAA! imitation and I wanted to go... you know... just nicely tell him to calm down.
Or slap him, couldn't make up my mind.
But Difo strikes out and now it's Harper with 2 guys on, but the thing about Davis is nothin' bugs the guy.
That's why he's the closer.
And in the end, it's the drop off the table curve for out number 3.

After a couple minutes, Flynn (who hadn't been to Wrigley in years) asks me if there's a reason everybody is standing around instead of leaving.
HAHAHA.
Yeah, buddy, everybody sings.
It's a thing here.

I'd like to hear Go Cubs Go on Sunday too.

Yeah, #Cubs lose but... how good is Willson Contreras? 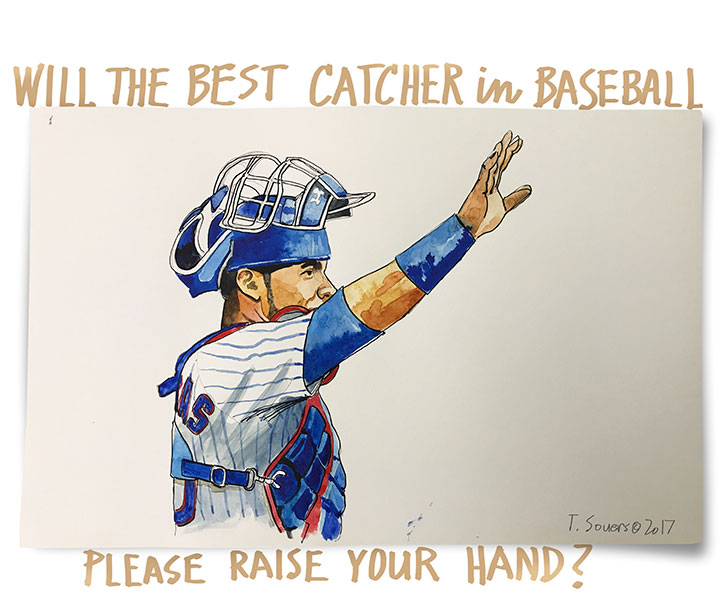 First off, if you've been a Cub Fan long enough, your skin is just a tad thicker because you've seen this before.
Your Cubs Memory Banks are used to a loss like yesterday's day/night single header that included a wasted genius performance by Willson Contreras.
In 1987 Andre Dawson was the MVP of the National League on a Cubs team that won... well here's a Wikipedia quote: "The Cubs finished 6th and last in the National League East with a record of 76-85, 18 1/2 games behind the division and pennant-winning St. Louis Cardinals."
Do you have any idea how many Andre Dawson feats of impossible excellence were wasted in losses?
To this day I could hurl.
I so remember being stuck in traffic with some construction on Diversey listening to the game when he hit his 49th homer. I think it was the Cubs last game of the season.
Huge deal - he tied some kid from Oakland named Mark McGwire.
But the Cubs gag and end up losing 4-5.
What a waste of a great season on such a horrible team, and thank the Baseball Gods for the MVP award that year.

The difference now is... this team is defending their World Championship.
Willson Contreras went 3 for 5 with 2 home runs and 6 RBIs, and 2 of those RBIs came in the bottom of the 7th putting the Cubs up 7-6 for their first lead all day.
I was driving home so I'll guess it was 4-5 hours after the game started (rain delays), so that lead was a loooong time coming and man you just felt soooo good.
Storybook stuff, this game of Willson's.
But then the bullpen sputtered as the lead changed a couple times, and in the end the Cubs lose 8-10.
Instead of the headlines being all about Contreras, they're about Paul Goldschmidt and his 3 fun-wrecking dingers.

But I'm lookin' at Contreras and thinking... hey Yadier, get out of the way. 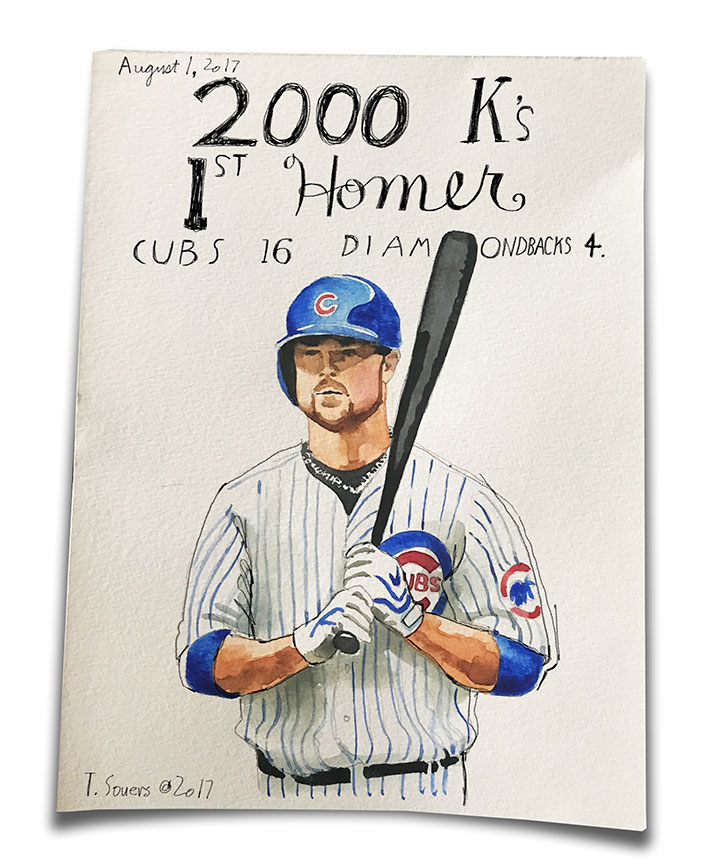 The bummer was Lester had about 100 pitches going into the top of the 5th, he hit a guy, gave up a single to Pollock and a double to Peralta so Joe pulled him with the Cubs up 8-2 which meant Lester didn't get the W.
I can't argue.
But the Cubs weren't done.
They scored 8 more.
Javy Baez appears to be semi-lost and just... overswinging at everything, but got a dinger.
Anthony Rizzo's back seems to be better.
And Willson Contreras is so insanely hot you can't believe... I swear if you could teach half the Cubs how to pole vault, they'd probably be good enough to make the Olympics as decathletes.

Okay, huge win.
Nats lose badly as their bullpen gags up 7 runs to the Marlins after being up 6-zip. Plus Max Scherzer left with a neck thing.
The Brewers beat Carlos Martinez and the Cards 3-2. Okay. Now let the Cards win tonight, please.

Hello August, so nice to see you.

Here's the illustration I did in my little sketchbook in 2003:

I still didn't know his name, but knew that this would be an event in Cub history and lore and be classified with other unfortunate Cub things.
That last line, though: "I say, we all just need a little practice in championship games. Even fans."
I think I wasn't wrong there.
Since then, I think we've all acknowledged that if we'd been sitting in that seat, we'd have done the same thing.
Since then, we've all been embarrassed by our collective reaction and need to scapegoat the guy.
The Ricketts family, for all I know one of them could have been in the stands back then, but they were a million miles from team ownership.
Some are calling this a PR ploy.
But I don't think so.
In fact, my eyes got a little watery when I read about it the first time.
Whatever you think, it really is a nice opportunity for closure, and that's how I'm gonna take it.
End of chapter, no need to speak of it again.

Hmmm...
What do you wanna talk about?
How about the Cubs got ace Jose Quintana, closer Justin Wilson and seasoned pro backup catcher Alex Avila without giving up any of their major league guys?
That's The Plan.
My holes and doubts are back to hopes and dreams.
It reaffirmed all my Theo Faith.
Seriously amazing, and now it's just full speed ahead.

Or we could talk about how about the Cubs play their next 3 games at Wrigley against the 60-45 DBacks, while the Brewers and Cards play at Miller.
And then the Cubs play the 63-41 Nats while the Cards play in Cincinnati vs the last place Reds in Cinci, and Milwaukee plays in Tampa.
This will be one tough stretch, but it's also... it's August and suddenly everything is playoff baseball.
The greatest part of the season.