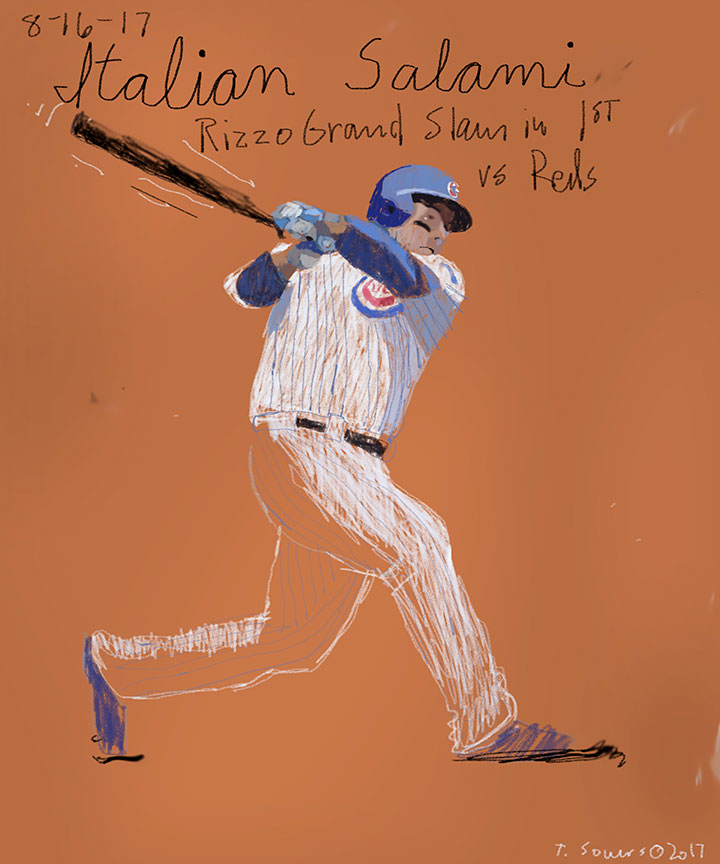 Homer Bailey.
Guy's got an ERA over 8 and started vs the Cubs last night.
Zobrist single.
Schwarber single.
Bryant walk.
Rizzo... grand freaking salami.
Or Italian Salami in this little post.
I thought the Cubs would score 20 last night, instead they win on a wild pitch by Reds reliever Blake Wood with Javier Baez on 3rd.
Seriously, Cub bats?

John Lackey... when I was a kid there was this other kid who's last name was Slimack.
And he sweated a ton, so his name really fit.
You didn't want to play shirts and skins with this guy 'cause it was gross.
John Lackey was totally Slimack last night.
Good god he was sweating so much he could hardly grip the ball.
I had to turn up the AC just watching his shiny, slow moving self.
He'd thrown what? 45 pitches thru 2 innings last night?
Walking guys in slow sweaty motion...
Thought he'd go maybe 3 innings, but the old hoss sucked it up and went 6, gave up only 1 run and in the middle somewhere, with all the speed and agility of an armadillo he stole the first base of his career.
Homer Bailey never in a billion years thought he'd try such a thing.
That's entertainment, man.

Anyway, a great night overall as the Cards lost to the Red Sox with Yadier not being able to handle a relay home as the winning run scores for Boston in the bottom of the 9th.
Sweet.
And it's a 1:20 today with Jon Lester on the mound. 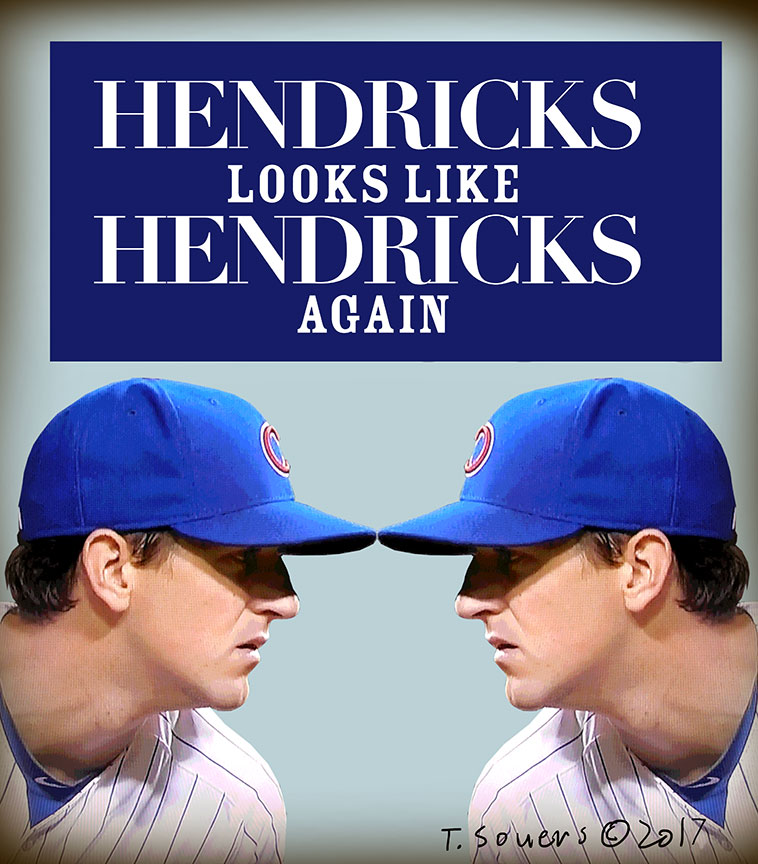 Ugly loss, I know.
But Kyle Hendricks?
Looked like a million bucks.
His quote was something like, "Fastball command was good."
But he had every pitch working.
The only thing not working so great was the ump.
Did you see the Votto strikeout?
For his second strike three of the at bat, Hendricks had to throw the first strike three again.
Just under Votto's armpit, over the inside part of the plate.
Not so much as a swing but a little bat-jerk from Votto, so probably he got the regular K than a backwards one, but whatever.
A K.
Hendricks walked 4 guys, but damn he was good and that's nothin' but fabulous news.

The 1-2 loss wrecked the chance at the 20-10 record since the All Star break, which was a nice round memorable number.
Instead they're 19-11.
That's pretty damned good, and if they could just find a teeny bit more mojo... they'd be winning games like they lost last night.
Kyle Schwarber led off the bottom of the 9th with a gorgeous at-bat despite the called strike 2 which was looow.
Worked it to 3-2, fouled some off, got a fastball he liked and smacked a single.
Heyward's at bat was way less gorgeous but the shot down the 3rd base line sure was.
I had quick text conversations about having Baez sac bunt in that situation, and in retrospect I wish he hadn't but whatever, he moved the runners.
Then Zobrist, his numbers aren't so good but you and I both know he's hurting, and he's just... the professional.
SMACK.
Schwarber scores, Heyward is held.
You and I are making inappropriately loud noises inside our houses and nobody's sitting anywhere.
Jon Jay has been amazing lately, but he K's.
Then so does Avila.
Over.
GIMME A TAD MORE MOJO PLEASE!

Cards lost badly to the Red Sox, Brewers beat the Pirates, Cubs up 1.5 over both those guys.
A missed opportunity at a leeeetle more breathing room.
Maybe John Lackey can continue his more recent decency and give us a win tonight.

The NL Central will be won by a nose. Go Cubs.

Last night I got a text from Cardinal Fan Dickie.
"Guess who's in first place?"
I pictured his smirk. But...
Not so fast there, Dickie.
The Cubs are still in first by POINT OH OH ONE PERCENT!

That's not to say that yesterday's lackluster loss to the D-Backs wasn't completely revolting, or that the Cardinals' 8-game winning streak doesn't make my soul vomit.
But I always like this kind of a setup towards the end of the season.
If it comes down to a regular season game between the Bears and Packers to see who goes to the playoffs, buddy that's living the fan dream. (Okay, sorry for saying "Bears" and "Playoffs" in same sentence.)
Here's how the Cubs' schedule looks at the end of September on my awesome Fridge Magnet from Opening Day: 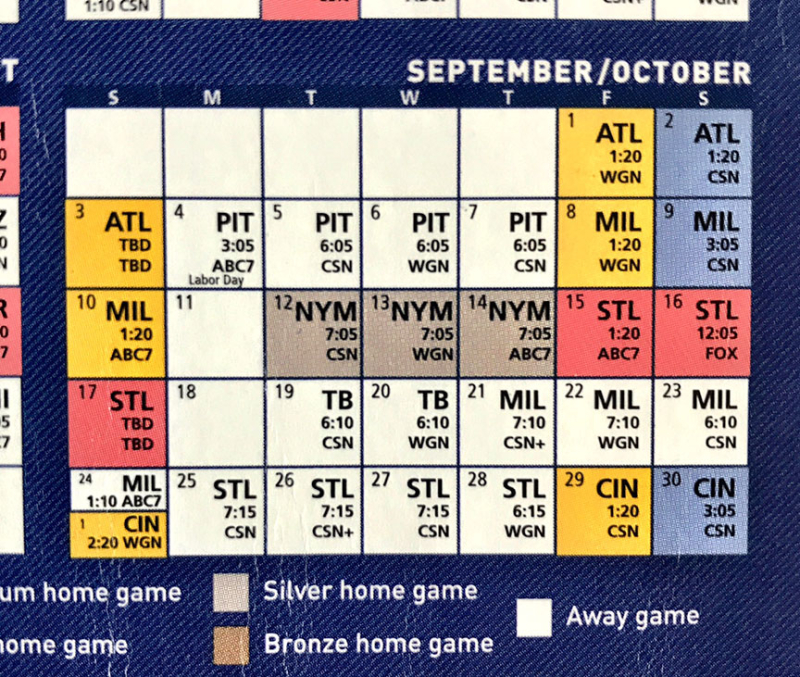 This season is backloaded with Cards and Brewer action and a 4-gamer vs the Pirates thrown in for good measure.
If it all works out perfectly, one Willson Contreras will be back swinging right about the 15th, a Cubs/Cards series.

In the meantime, there's one more game vs the D Backs today with Jake Arrieta on the mound.
I would so enjoy evening-up this season series today, since the team from Arizona is up 3-2.
I would so enjoy the Cubs not leaving 97 guys on base.
I would so enjoy the opportunity to get my face about an inch from yesterday's home plate umpire Mark Wegner's face and just scream at the top of my lungs and hope little droplets of spit attached to his nose.
So go bats, go Jake, go Cubs.

Last thing.
Bryce Harper's knee injury.
This sounds really weird but they say it's just a bad bone bruise (huh?) and not ligament damage, so good for Harper.
Anyway, I hate it when it happens to a Cub, and Karma is whispering in my ear as I write this.
It says, "Don't be happy when the enemy goes down or I will get you back, my friend."

I love these new stats that come courtesy of some cool measurement technology.
Like exit velocity.
You've seen it used when someone really smacks the ball.
Last night both Kyle Schwarber and Alex Avila hit homers that went over 440 feet, and while I've no idea what the exit velo of these hits were, I do know that some guys on the wrong team hit homers, too.

John Lackey actually pitched really well last night.
He got Paul Goldschmidt to ground into a double play in the 1st, and then in the 4th struck him out with a gorgeous outside off the plate darter that Goldschmidt missed by a mile.
But in the 6th, Lackey threw a mistake over the middle and Goldschmidt went the other way with it, up over Jason Heyward's glove and into the bullpen.
And that's when I measured Lackey's Emotional Exit Velocity at about 107 - 108 MPH.
He was peee-oh-ed.
It was the second long ball he'd given up.
And when Joe Maddon came out and took the ball from him, and he was even more pissed.
You and me?
I think we were okay with it - the Cubs were still up by 2 and Carl Edwards needs just these kinds of situations to make friends with his confidence again.
Of course he walked the first guy, but then Daniel Descalso hit into a double play.
Nice.
It was 5-3 in the 8th when Javier Baez, Ian Happ and Jon Jay all knocked in runs and it ended up 8-3 Cubs.
And that is one fantastic Friday night of baseball after the non-fantastic game Wednesday when Willson Contreras pulled a hammy.
BUT.
I felt just like this after the last Diamondback series when the Cubs opened with the 16-4 laugher and then proceeded to lose the next two.
Tonight will be Jon Lester and... just saying the Cubs need to win a series.
The Cards have won 7 freaking straight, and the division is seriously bunched up with the Cubs at the top, then the Cards 1 back and the Pirates and Brewers 3 behind. 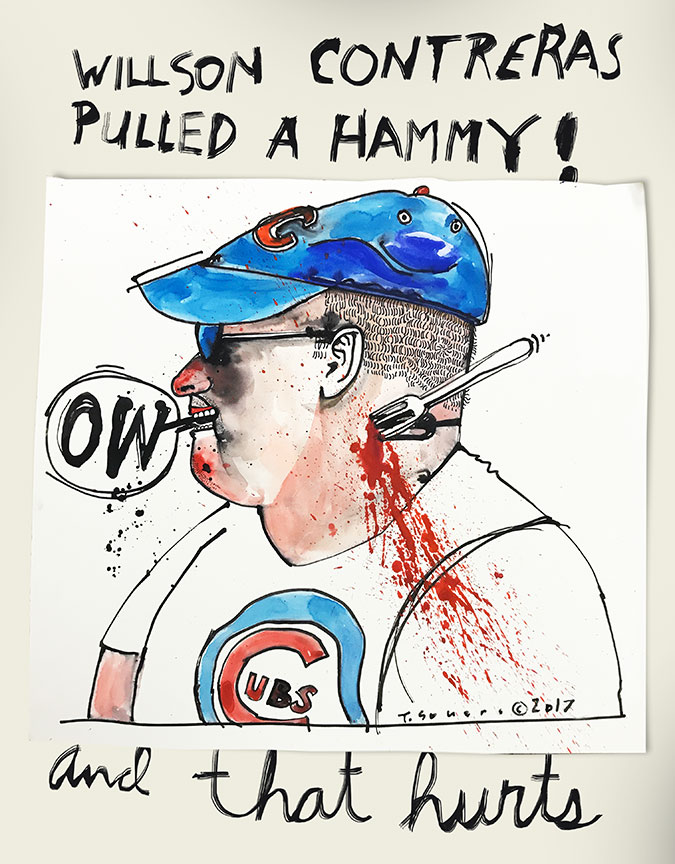 Well if you're like me, you were in meetings all afternoon and missed the disaster live yet couldn't escape the rotten news when somebody texted you.
Here's what mine said...

It's the kind of text that you get walking down the hall and forget you're walking.
Sideswipe the wall.
Bump into Chris or Sarah and don't apologize.
Keep walking.

This is the kind of thing makes you realize just how impossibly lucky the 2016 Cubs were.
BUT.
Our contract with the Theo-led Chicago Cubs includes the joys and pratfalls of watching kids grow up in front of our eyes.
Now, we'll see how they deal with serious adversity.
Same with you and me, because as I've said, never in our lives have we lived through a season as the fans of the Defending World Champs.
And it's definitely weird.

There are lots of kinds of parkers, I guess.
But the rarest and coolest is an inside-the-parker by a Chicago Cub!
Javy Baez hit a ball-istic missile to the veeery corner of right at AT&T Park last night - maybe 410 feet or so - and it didn't go out.
Instead, it "caromed" (I wasn't listening to Pat but surely that's what he said) off the bottom of the wall and bounced a mile away from Giant right fielder Carlos Moncrief.
While that was happening, Baez was running and it looked like he got faster going around each base until... the headfirst slide past Buster Posey.
Oh yeah, Jason Heyward was standing on first when it all happened, so he scored first.
It's so breathtaking, an inside-the-parker.
You don't see that many, either.
Not quite a unicorn, but maybe a UFO.
Anyway, Cubs start the late-night West Coast trip with a nice 5-3 win over the Giants.
Jake Arrieta seems to be looking stronger and better as time goes along, which is important this year.
The Cubs beat a team they're supposed to... the mostly surprising thing was Willson Contreras went 0fer.
Milwaukee loses their second in a row, Cubs up by a game and a half and I also got a text from Dickie the Cardinal Fan that said, "AT SOME POINT THE CUBS HAVE TO START LOSING GAMES".
Haha.
Nice night.
Okay gotta run.
Go Cubs.