« Italian Salami: when Rizzo hits a Grand Slam. | Main | Javy Baez is the God of the Glove. »

Hey Cubs need an RBI? A homer? Someone to break a tie? There's a Happ for that. 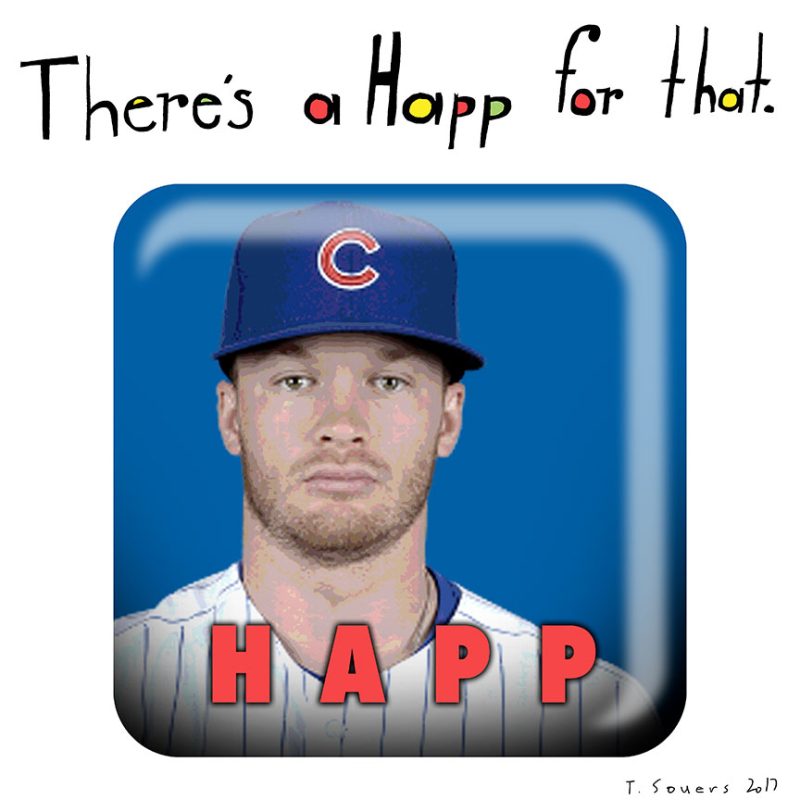 Nice day for Ian Happ knocking in the first run, hitting a dinger and scoring the run to give the Cubs a 3-2 lead in the 6th.
They ended up winning 4-3 with only a relatively mild freak out for you and me when Hector Rondon came in and the Blue Jays "made it interesting" (said J.D.).
When 20-HR guy Josh Donaldson connected on a fly to Jason Heyward, it sounded worse than it turned out to be.
And here Jim Deshaies said something like, "Sometimes you just have to throw it in there and see what happens."
Which only reminded me that that's what it seems like with every Rondon pitch lately.
But Jose Quintana looked really good, and Felix Pena coming in and striking out the side in the 7th... where did that come from?
That would be nice if that became a thing, Felix.
The biggest drag of the day happened right after the biggest joy of the day... it's always awesome to get to a pitcher early and the Cubs loaded 'em up with just one out in the first (JOY!), which is when Happ knocked in Jon Jay who had walked.
Blue Jay starter Nick Tepesch seemed to lack control, like he only one pitch -  high and outside off the plate.
And I just wish Alex Aliva had had a tad more patience before grounding into the inning ending double play (DRAG).

It seemed like half the contact Toronto made went to Kris Bryant and yeah he had a couple tough errors but... remember way back when and people were saying he's not a 3rd baseman? That he should move to the outfield? That ain't happening.

Anyway, the weather yesterday was Hawaii-like in it's comfortable perfection, and while today's supposed to be a tad hotter I would still recommend that you drag your transistor radio outdoors somewhere and listen to the game rather than hunker down in front of a TV.
We've got about one quarter of the season (said Len).
That translates into about 10 more minutes of Summer, so go take advantage.
Kyle Hendricks is on the mound, and I doubt we'll see Wade Davis today.
Mike Montgomery is going to be Jon Lester for awhile and the deal we all thought we were getting with Justin Wilson was... that dude's supposed to have closer stuff. I imagine we'll see Carl Edwards Jr. today, maybe Brian Duensing, but who's gonna close?
Maybe Rondon if he didn't throw too many yesterday...
I don't know, but this game'll be interesting bullpen watching just to see what Joe does without Davis and Montgomery.
Whatever - I hope today's joy comes in the form of another Kyle Hendricks gem.

What a game! (Please tell me that you didn't turn it off after the top of the 10th)

The message for Cubs fans: Never. Give. Up. NEVER.

The message for the Cubs players: You. Will. Find. A. Way.

Way to vindicate yourself Mr. New Cub Avila! Way to save Justin Wilson's ass while you were at it!

We're not the 2016 Cubs. We're not going to roll over the rest of the division. But we still EXPECT to win.

No, I watched.
Still can't believe it.
From what I heard, there were TONS of Blue Jay fans in the stands Sunday.
How bummed would you have been to come all the way from Toronto to watch that 10th inning?
Ow.
Oh well, somebody's gotta lose.