So sorry but on the road and gotta run.
Awesome win and awesome save for Wade Davis AND...
Cubs gain in standings:

The Cubs thrashing the Phillies 17-2 suuure does alot to help you forget the last couple rotten losses to rotten teams, doesn't it?
2 homers each from Anthony Rizzo and Tommy LaStella, and 2 more from Kris Bryant and Ben Zobrist... what a night.
You know when you're driving somewhere unfamiliar and you have Google maps on and the lady's voice is giving directions and she says, "Turn right in 1000 feet" and you go "WHAT? How far is 1000 feet?!" and you go a block and then another and another and FINALLY she says "Turn Right."?
I HATE that cause I just don't have a knack for distance at all.
But last night the Cubs hit a total of 2,432 feet of homer.
Oh that's just so sweet.

But anyway, Kyle Hendricks.
Yeah the homer in the first.
But 7 innings in 90 pitches? Oh man is that's perfect.
8 strikeouts.
And then the two hits from his own bat in the top of the 7th - a single and double and driving in 2 runs while scoring one too?
And THEN going out to pitch the bottom half?
Ironman stuff.

This Phillies team is about the worst in baseball, so of course the Cubs should win and of course Hendricks should have his way with them, but the game before these Phils didn't look like the worst.
Ah whatever, a really nice win on the same night the Cards and Brewers do the same, so it all stays the same in the standings.

Okay John Lackey, I recommend concentrating on throwing strikes and if by chance you get on base... stay there.

Cubs 9 Reds 3. And #ThrowbackThursday with a Ron Santo painting. 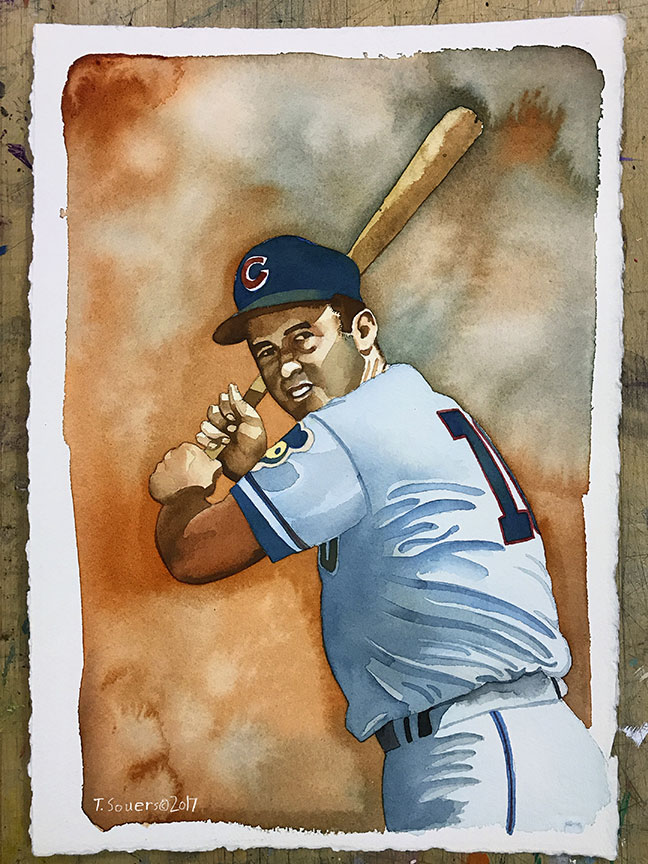 Worked late.
When I turned on Emily's radio, one of the first things Pat said was that the Cubs had scored 3 in the first.
Walked over to the community fridge and grabbed a frosty cold Modelo.
Then came the Kyle Schwarber 3-run dinger that had to be reviewed, but stood.
Cubs 7 Reds 0.
Then LaStella hit one out to score two more and I rudely interrupted a presentation to loudly gloat.
(Sorry Jon, if you read this.)
Anyway, 9 zip in the 4th?
Mikey Montgomery was doing nicely, so...
Yeah, I missed some fireworks but that kinda lead makes the late work okay.

Started to hear a bit about the drama going on in Pittsburgh with Rich Hill throwing a perfect game.
I was at the Cubs vs White Sox game where Michael Barrett punched A.J. Pierzynski, and that's all anybody remembers about that game.
Very few people remember that Rich Hill was on the mound for the Cubs, and he was horrible.
A 2nd baseman named Tadahito Iguchi hit 2 of his career-total 44 homers off Hill.
In 4 innings, he gave up 5 hits and 7 runs because he also walked 5.
Guy had an insane curveball, but his control sucked.
For him to be some kind of Dodger God 11 years later is nothing short of astonishing.
And tonight, he'd lost the perfect game in the 9th on an error, then gave up a walk-off homer to Josh Harrison in the TENTH inning to lose the no hitter.
Nobody never said nothin' about baseball being fair.

Speaking of which, how 'bout Ron Santo.
I will forEVER be pissed at the Hall of Fame voters who refused to let him in their little club until after his death.
But I won't dwell.
Santo was my favorite Cub when I first saw them play on my Grandpa's black and white Zenith.
Freak of nature chance, we happened to stay the summer in Chicago in 1969.
And the pizza power, the hard hats and the heel clicking grabbed my young heart and turned it all Cubby Blue.
My friend Brad Morgan sat next to Santo on a plane to somewhere, and once he broke the ice they jabbered about the Cubs for the whole flight.
It was during the season, and of course Santo was flying to the next game but still had time to chat.
Think about that.
I made plenty of fun of Ron right here, back when he was the first Ron with Pat, but he was all Cub.
Hilarious stories, emotion beyond belief, just great stuff to listen to.
If you go look at the World Series trophy at Wrigley, they have Ron's World Series ring on display in the same area (along with Ernie's).
It's easy to just marvel because oh my god LOOK AT THAT RING!
But if you do see it, take a step back and think about those guys who missed 2016.
There's actually alot more to that ring than the sparkle.

Cubs and Cardinals. Like ships passing. Only up and down.

I still expect this to come down to the wire, but you know... you gotta jump on the good when you can.
Last night there were opposite spankings in the NL Central.
One took place in St. Louis, where the then 55-69 San Diego Padres handed it to the Cardinals 12 to 4.
The other took place in Cincinnati, where the Cubs came from behind to whack the Reds 13-9, and it shoulda been 13-6 but Maddon (smartly) left Felix Pena in for the last 6 outs and he gave up a couple dingers.
But last night a couple things happened.
First, Javier Baez' at bat in the 7th.
With the Cubs down by 2 runs, with two outs and the bases loaded, you're thinking oh man - Baez will either homer or strike out...
Yes he's been the shining stud lately but you can't help thinking like that.
And then... instead Baez showed how his bat is maturing.
Down 0-2, he... lays off some balls.
With each pitch you and I are off the couch and getting closer to the tv.
Works it full.
Just that was kind of a victory.
I think he fouled the next pitch off, and then hits a broken bat single to right field that scores Anthony Rizzo and Alex Avila game tied at 6.
Huge.
Ben Zobrist then pinch hits and 2 more score, Cubs up by 2.
In the top of the 8th, the Cub bats became sort of mean as Cinci's relief corps, or what was left of them last night, were just overmatched.
The Cubs scored 4 more before the first out of the inning.
Ruthless.
Demoralizing.
2016-ish.

And at the end of the night, the Cards sank to 4.5 games behind the rising first place Chicago Cubs.
The Brewers won so they're just 2.5 back, but for the first time in a long time it feels like there's just a bit of breathing room.
It would be really really fabulous if they could just keep the pedal on the metal and make the breathing room become just... normal atmosphere.

Javy Baez is the God of the Glove. 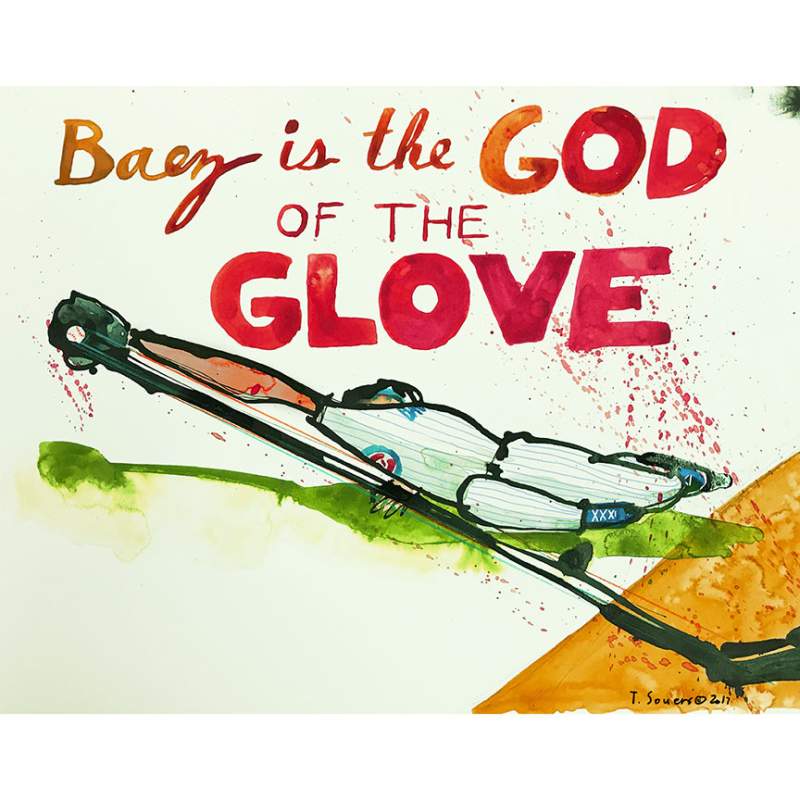 On Friday I got a text from my cousin Gurke that said, "Oh my god, if you're not watching you'll know what this is about when you see the highlights."
I wasn't watching.
I was outside listening, and it was mostly Ron who described the indescribable play Javier Baez made on Jose Bautista's one hopper to short in the 9th.
Okay so here's the deal - any time you watch the Cubs and Baez is on the field, you're liable to see something so special that it becomes legend.
In 2008 I wrote the same thing about a Reed Johnson catch in Washington.
Remember this one? 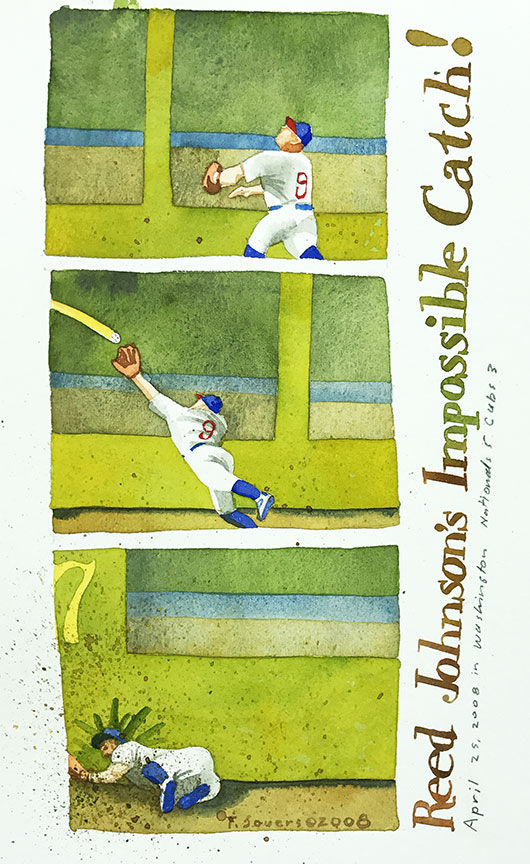 Outfield catches where a guy crashes into the wall are so cool.
The ones where a guy really sells out and isn't leaping for show.
Johnson's catch was astounding.
So was Baez' catch and throw - even on the replay here... jaw-dropping.
And I doubt there's ever been a time in Cub History when the starting shortstop goes on the dl and the guy replacing him is as good or better than.

I'd be remiss if I didn't give props to Blue Jay center fielder Kevin Pillar and his amazing catch going full speed into the bricks.
Reminded me of Sam Fuld from 10 years ago. 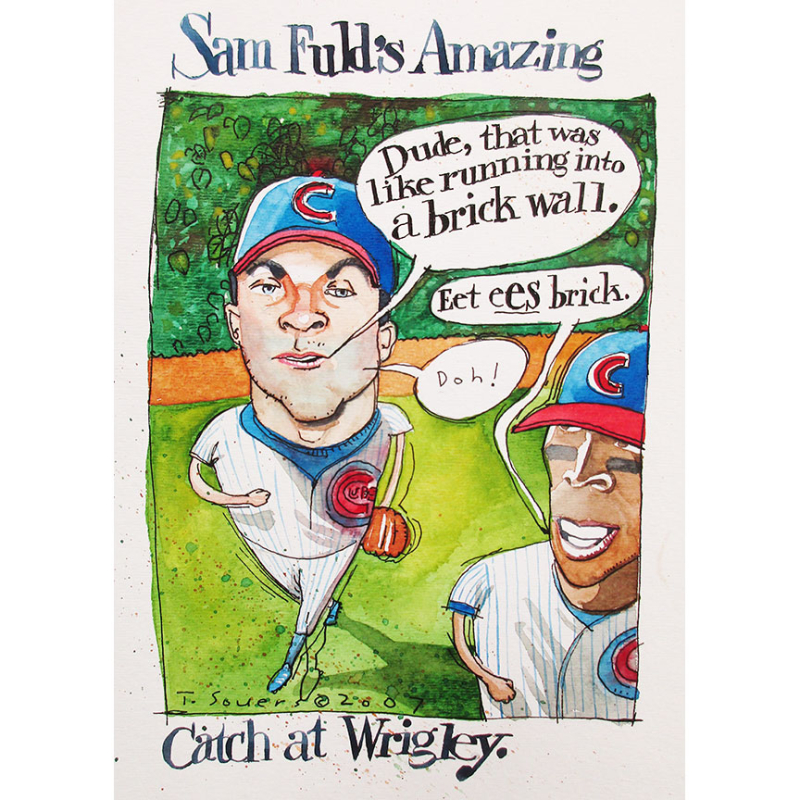 Fuld was nuts and a joy to watch in the outfield.

Okay back to today.
Cubs sweep the Blue Jays in the craziest way yesterday with the 2 wild pitches from Roberto Osuna as his catcher Raffy Lopez allowed 2 strikeouts to become Cub base-runners.
After Alex Aliva grounded into a DB with the bases loaded the day before, it was super sweet to see him knock in 2 in the same situation to win the game 6-5.

Take a breath.
I got a text last night that said the Cubs have the 2nd best record in baseball since the break.
It's funny how the bad losses are so magnified because... we're more than okay right now.

Hey Cubs need an RBI? A homer? Someone to break a tie? There's a Happ for that. Nice day for Ian Happ knocking in the first run, hitting a dinger and scoring the run to give the Cubs a 3-2 lead in the 6th.
They ended up winning 4-3 with only a relatively mild freak out for you and me when Hector Rondon came in and the Blue Jays "made it interesting" (said J.D.).
When 20-HR guy Josh Donaldson connected on a fly to Jason Heyward, it sounded worse than it turned out to be.
And here Jim Deshaies said something like, "Sometimes you just have to throw it in there and see what happens."
Which only reminded me that that's what it seems like with every Rondon pitch lately.
But Jose Quintana looked really good, and Felix Pena coming in and striking out the side in the 7th... where did that come from?
That would be nice if that became a thing, Felix.
The biggest drag of the day happened right after the biggest joy of the day... it's always awesome to get to a pitcher early and the Cubs loaded 'em up with just one out in the first (JOY!), which is when Happ knocked in Jon Jay who had walked.
Blue Jay starter Nick Tepesch seemed to lack control, like he only one pitch -  high and outside off the plate.
And I just wish Alex Aliva had had a tad more patience before grounding into the inning ending double play (DRAG).

It seemed like half the contact Toronto made went to Kris Bryant and yeah he had a couple tough errors but... remember way back when and people were saying he's not a 3rd baseman? That he should move to the outfield? That ain't happening.

Anyway, the weather yesterday was Hawaii-like in it's comfortable perfection, and while today's supposed to be a tad hotter I would still recommend that you drag your transistor radio outdoors somewhere and listen to the game rather than hunker down in front of a TV.
We've got about one quarter of the season (said Len).
That translates into about 10 more minutes of Summer, so go take advantage.
Kyle Hendricks is on the mound, and I doubt we'll see Wade Davis today.
Mike Montgomery is going to be Jon Lester for awhile and the deal we all thought we were getting with Justin Wilson was... that dude's supposed to have closer stuff. I imagine we'll see Carl Edwards Jr. today, maybe Brian Duensing, but who's gonna close?
Maybe Rondon if he didn't throw too many yesterday...
I don't know, but this game'll be interesting bullpen watching just to see what Joe does without Davis and Montgomery.
Whatever - I hope today's joy comes in the form of another Kyle Hendricks gem.