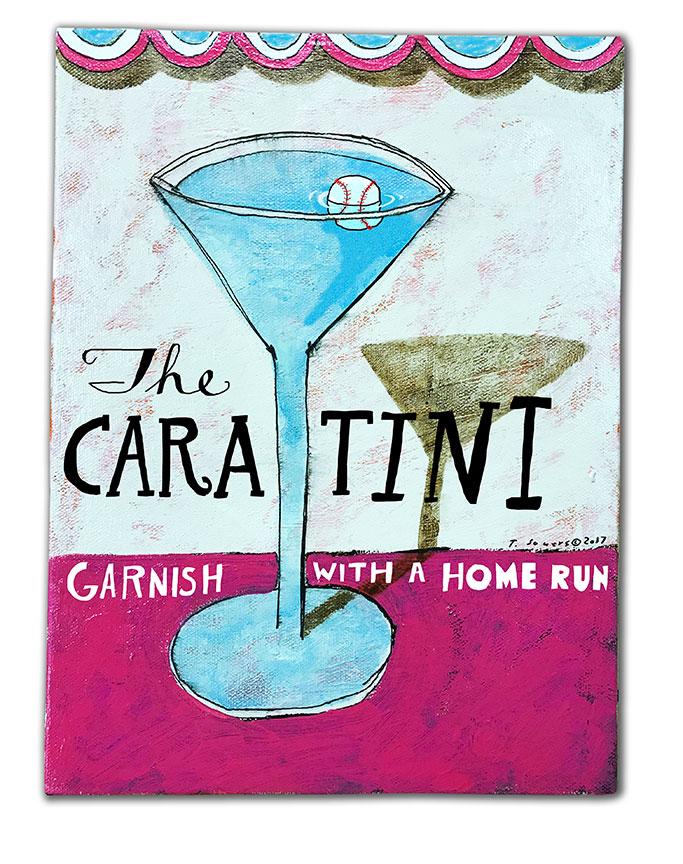 How was THAT for a Sunday afternoon?
Cubs take 2 of 3 in Milwaukee with the Brewers now 2 1/2 out.
John Lackey... come on man, what do you want from a 5th starter?
Yeah he gave up a 2-run homer, and that's it, over 6.
I'll take that any day.
Then Grimm/Rondon/Davis finish it off.
Bats.
Top of the 6th the Cubs get four 2-out hits in a row (is Contreras the fastest catcher in baseball?) to take a 2-nothin' lead.
Then the Milwaukee homer from Domingo Santana ties it.
And then...
Nothing is cooler than somebody stepping in for another and succeeding.
Anthony Rizzo's back had stiffened up, and Maddon puts Victor Caratini at 1st base.
The backup catcher.
Top of the 7th, Caratini hits a 420 footer - his first homer in the Bigs - and the Cubs take the lead back.
Kris Bryant hit his 20th of 2017 in the 8th and you and me go light some charcoal, listen to the rest on the AM.

And right now as I write this, I see this tweet: 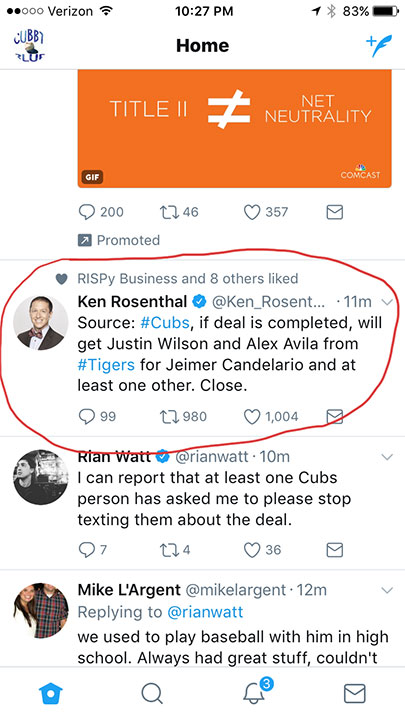 If that happens, you know who's a genius?
Our Theo. 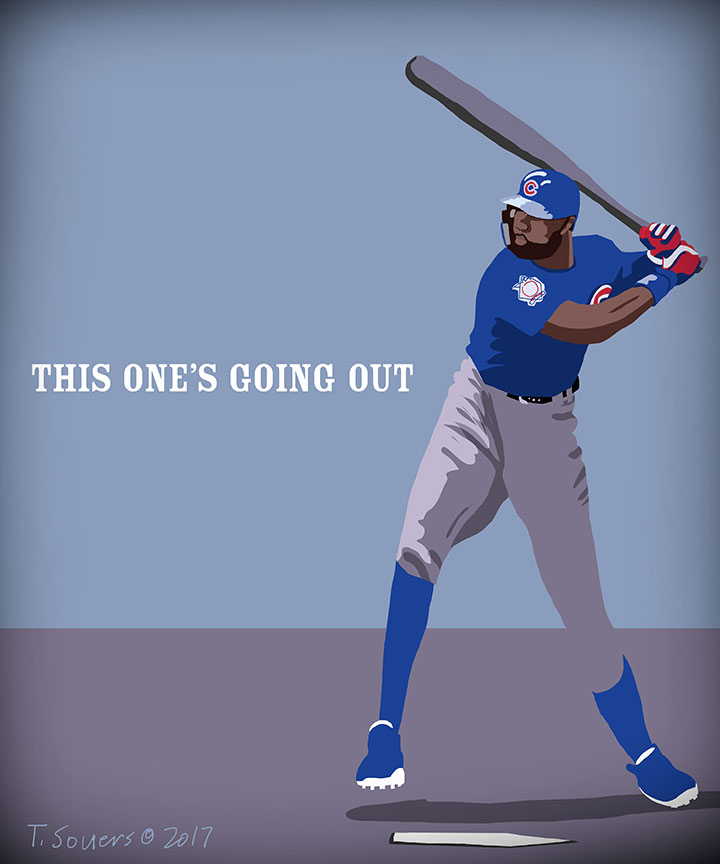 Well, today's game has already started.
Sorry, we had a shoot all last week, and then yesterday was travel.
But here's a Jason Heyward illustration even if it is a little late.
And now... John Lackey on the mound.
Cubs in first.
It's gorgeous out.
Game 3 vs the Brewers.
Go Cubs.

One last thing.
John Arguello.
Amazingly talented writer, blogger, and fan, passed away.
So sad.
Here's a great tribute from Arizona Phil at the Cub Reporter. 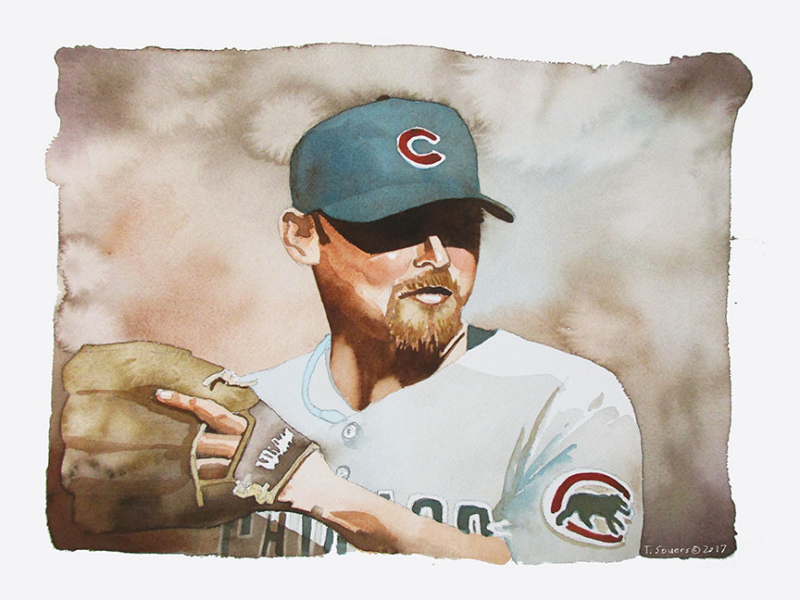 My buddy Oif saw Kerry Wood walking in a park the other day.
Said he looked in great shape.
KERRY CAN YOU COME BACK?
Okay just kidding.

But... are you checking out MLBTradeRumors about every 5 minutes?
I am.
Because I don't believe Mr. Maddon when he says the team's all set as far as he's concerned.
If I'm him, I'm doing exactly what he's doing, which is trotting out guys like Justin Grimm to communicate "Ummm, we could use a little help here."

The Cubs took sole possession of 1st place last night with the 8-3 W over the Sox, and... I'm working so I didn't get to see but checking the box it looks like nobody hit anybody which means the young Sox didn't listen to their announcer Hawk which makes me like Rick Renteria even more.
And... Mike Montgomery is playing the position he's meant to play now.
The pen is so much more versatile with him there.
The Brewers and Pirates lost, Cards won.
One more Sox game and it's off to Milwaukee, and I expect they'll have their hands full of Cub fans.
3 games to hopefully put a little distance in this thing.
It's an awesome time of year. 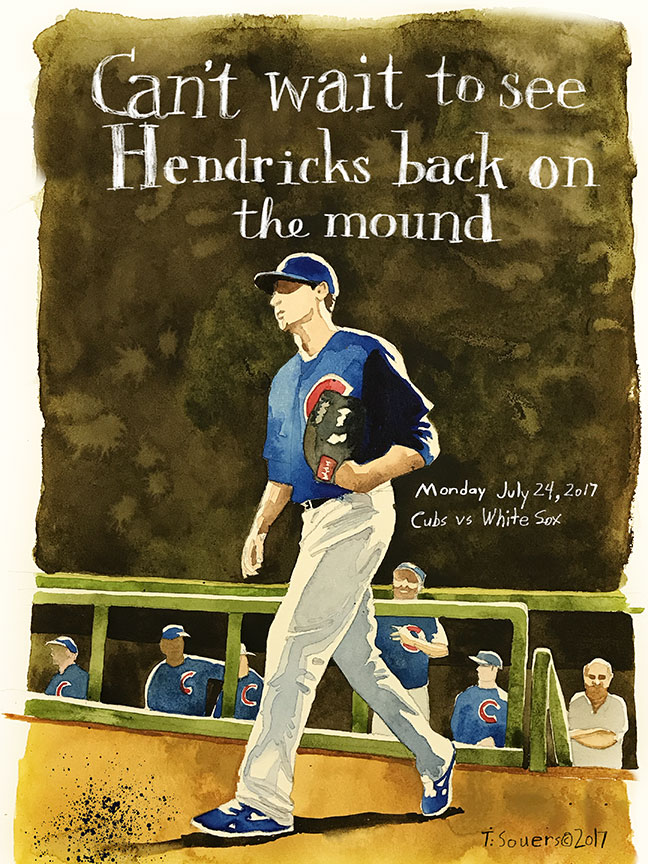 This isn't the biggest news to happen so far this season, but it could be.
Starters going on the DL is horrible so..
Kyle Hendricks coming back and being 100% is huge for the Cubs.
Just ask any Dodger or Nat fan (you did see Clayton Kershaw and Stephen Strasburg ,right?)
And... against the Sox who are in the middle of their version of the Cubs Rebuild, so yeah they're not supposed to be good but you won't hear me say that because... that's when some Sox kid you never heard of ruins your day.

Last night was particularly satisfying, wasn't it?
Knock off the Cards again on a night when the New Ace didn't have his best stuff (or nerves or whatever).
But Jose Quintana gets W #2 for his new team.
Big homers from Contreras and Schwarber.
Just... beating the teams you're supposed to beat, even if they happen to be the Cardinals.
And that happened, conveniently, on the same night the Brewers lost so now the correct team is at the top of the Central.

Okay, now can you Cubs just keep winning and stay up there where you belong. 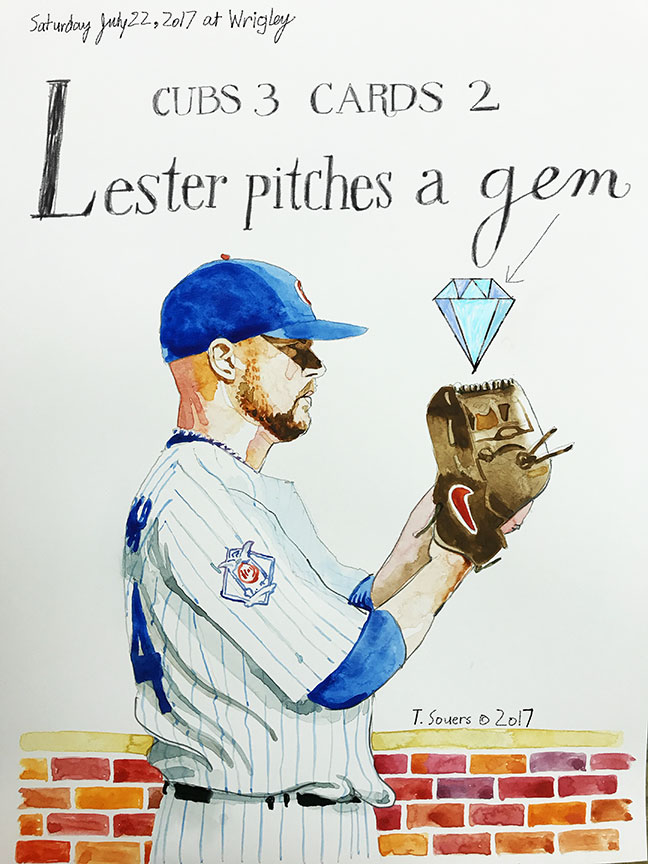 Remember that game on Friday?
The one where the Cubs were up 3-2 in the 8th, and then something revolting happened?
Me neither.
Because yesterday we got to see a classic Cubs/Cards game with a couple heavyweight stud aces just mowin' 'em down.
And in the end, the Cub Ace beat the Card Ace and it aced out whatever happened the day before.

Jason Heyward tripled in the 2nd but was still there when John Jay grounded out.
I was SO hoping for that run vs their former team.
There were zeeros through the first 7 innings.
Finally, Jon Lester faltered and gave up a couple long ones back to back.
Cubs nothin' Cards 2 with 6 outs left for our guys.
Jay's on 1st with 2 out and Ben Zobrist up, who smacks a double which scores Jay.
Then the just-recovered-from-the-pinkie-sprain Kris Bryant comes up and hits a busted bat single which scores Zobrist.
Now Anthony Rizzo's up and he's down to his last strike.
So with the 2 outs, Bryant is running on the next pitch which is gloriously Rizzo-dropped into the black hole between CF Dexter Fowler and SS Paul DeJong, Bryant never stops until he slides (feet first!) just past Fowler's throw that Yadier drops and that is called "victory" my friend.
Well, we had to live through 2 Wade Davis walks and Yadier up to bat with those guys on, and the heartburn that came with that.
But Yadier whiffs AND Lester gets the W, so it's all just so. Much. Sweeter.

Such a good game.

Brewers broke their losing streak and keep the 1-game lead over the Cubs, but honestly I'm getting way more concerned with Pittsburgh.
Thankfully, they broke their winning streak, and stay 3 back of the Brewers.
But this Central Division may be waking up.

Sunday Night Game of the Week on ESPN will feature the greatest rivalry in sports, so tune in at 7:05.
Go Cubs.

Maddon on Bryant's pinkie: we dodged a bullet.

Oh sure, Tim.
It's easy to joke about it now.
But yesterday when my buddy Oif said "Bryant's hurt", those are not words I ever want to hear.
Baseball seasons flashed before my eyes.
I kept refreshing a "Bryant" google search.
Finally, x-rays negative, a sprained pinkie, nothing to see here, folks.

And the Cubs win game #6 in a row, sweeping the Braves, while the Crew loses again.
1.5 games out of first.
How can you beat that?
Well how about a week of pure baseball nirvana?
The Cards this weekend, then 4 vs the White Sox followed by the Brewers at Wrigley next weekend.
If you would have told me in March that this Brewer series in August would be kind of a big deal... HAHAHA!
Anywhooo, a day off, hopefully Kris Bryant's pinkie can rest up with the rest of him and be back on the field before the weekend's over.